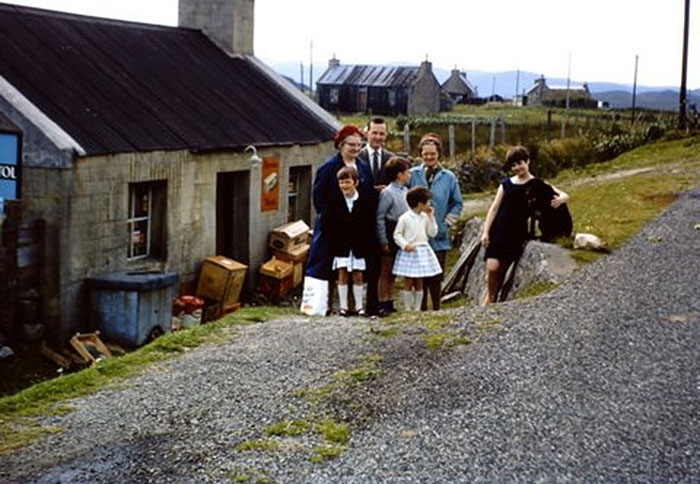 Back in August of this year I received an order for a print of my Balallan Post Office photo from Kate Morgan, all the way from Australia. Kate mentioned the post office had previously belonged to her great aunt and uncle, Joan and Angus. A few days ago I received a follow up email from Kate informing me the print had arrived safely. She also included this great photo taken outside the very same building. I love hearing about the background and history of the subjects I photograph. This old photo and the story behind it came as a real treat…

“I thought I would put a pic of what it did look like when my great aunt
and uncle owned it. At this time it wasn’t a post office it was just
“the shop” and my mum was saying that they used to do weaving in one
side of it at the time, mostly the men folk. That’s my granny in the hat
who grew up in Balallan and that’s Joan who still lives across the
road, with the dog. Her dad ran it also for some time. I am the littlest
one looking nervously at the dog as I was scared of them then! I must
say it looks a lot better now in your photo! My mum says that was 1968! I was 5!
Also turns out that my great grandfather “the Baker” (my granny in the hat’s father) built it!!!”

Although Kate now lives in Australia, she still has relatives in Balallan and visited the island earlier this year. I’m pleased to report she seems as happy with this more recent photo of the post office as she is with the one from her childhood: “The beautiful photo is here and in a frame and looks brilliant!!!! I Love it!!!” 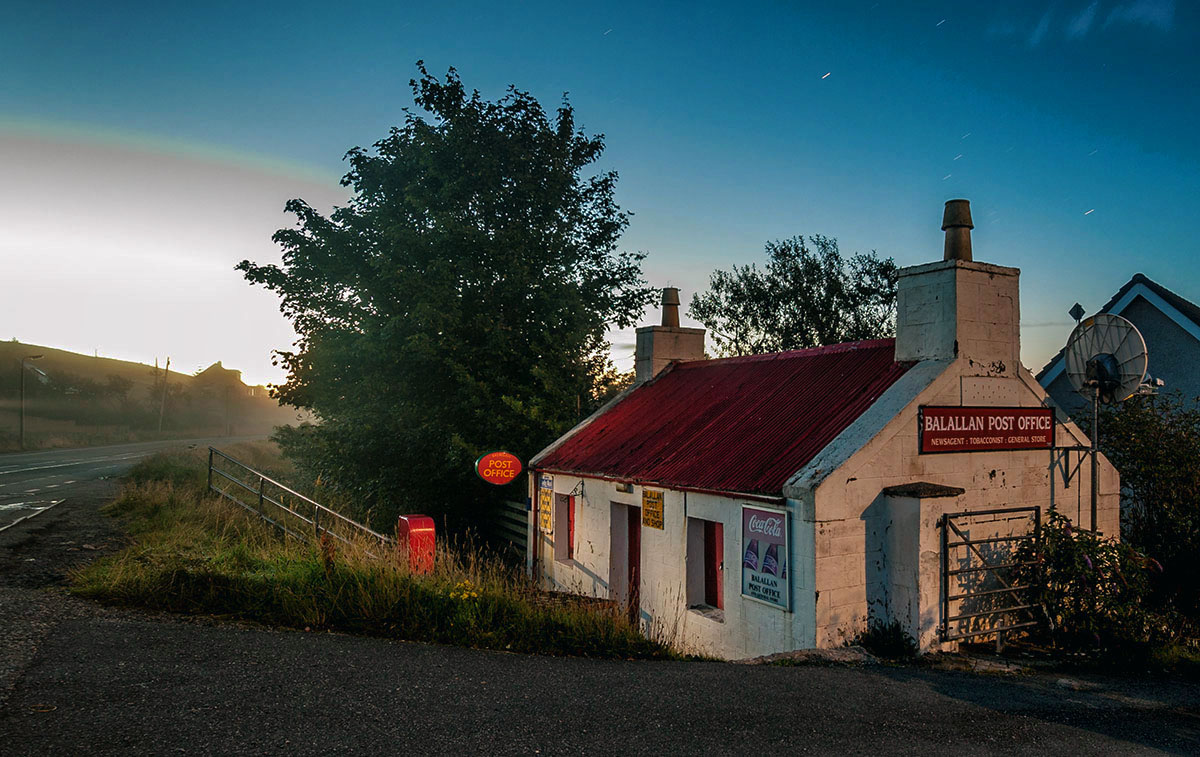 This photo of Balallan Post Office was shot during the early hours of August 26th 2010. I was heading home after spending a night photographing shielings along the Pentland Road, near Stornoway. I’d been after a moonlit shot of Balallan Post Office for a while but it seemed whenever I was passing by, either the nearby streetlights were bathing the building with their horrible orangey glow or the weather was against me. This time (just after 5am), all the street lights were off, the moon was bright and the clouds were few and far between. The skies were just starting to brighten – sunrise wasn’t too far away. This was a fair amount brighter than my usual night photo scene but all told, too good an opportunity to miss. On the way back from the Pentland Road I’d driven through several patches of low lying mist. You can see it rolling in to the left side of the picture. Within seconds of completing the shot, mist shrouded the scene, ruling out a second attempt.

Having trudged around a fair portion of Lewis for the previous six hours or so, I was tired and more than ready for my bed. It would have been so easy to drive on by, thinking ‘I’ll get that shot some other time’.  So glad I made the effort… otherwise I’d never have seen Kate’s old family photo, heard her story or have a copy of my photo hanging on a wall in Sydney, Australia!

A big big thank-you to Kate for giving me permission to share this great little slice of Hebridean history on the blog.