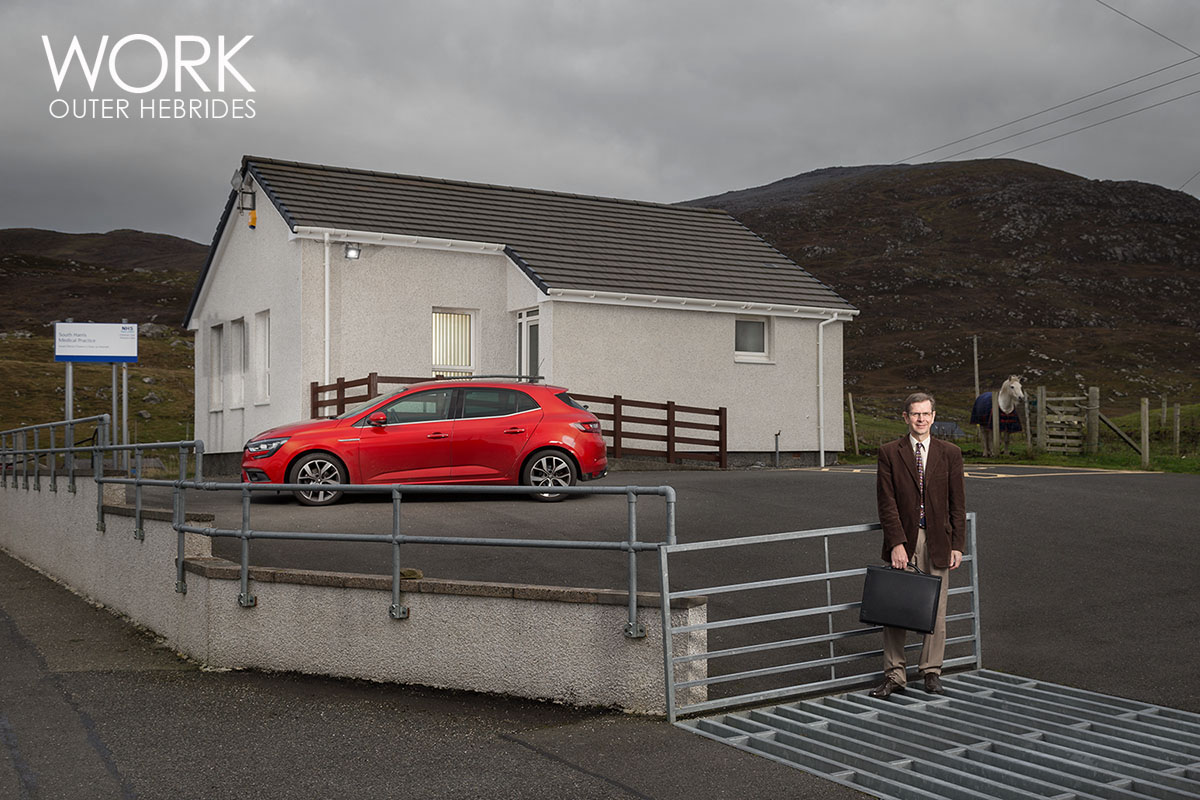 Above: Dr Naylor outside South Harris Medical Practice, Leverburgh. In the background, Roneval (the tallest peak in South Harris at 460 metres) and Charlie the horse checking out what’s going on.

Dr Naylor moved to the Isle of Harris in 1989. His surgery in Leverburgh is one of the smallest practices in Scotland. He’s one of the UK’s few remaining single-handed general practitioners.

In 2016, Dr Naylor was awarded an MBE in recognition of his ‘above and beyond’ commitment to medical services for 600 patients scattered across the southern end of the Isle of Harris. He operates a ‘no appointments necessary’ system, going out on call-outs any time of day or night, in all weathers.

Living close to the surgery, patients sometimes call at his house when he’s off duty. I’ve been guilty of that myself; Dr Naylor has fixed me up on a few occasions outside surgery hours. First time was a 5am call-out, not long after I first moved to the island. I was writhing in agony with gallstones. I got a shot of something or other for the pain and was packed off to hospital. A couple of years later I was knocking on his front door one wet and windy Sunday afternoon, having smashed my face into the steering wheel of a RIB while jumping waves in the Sound of Harris. The very next day I needed another head wound patching up after an incident with a metal bar and a hydraulic press. In my defence, I’ve managed to stay relatively accident-free after my initial ‘welcome to Harris’ string of disasters. Fingers crossed! 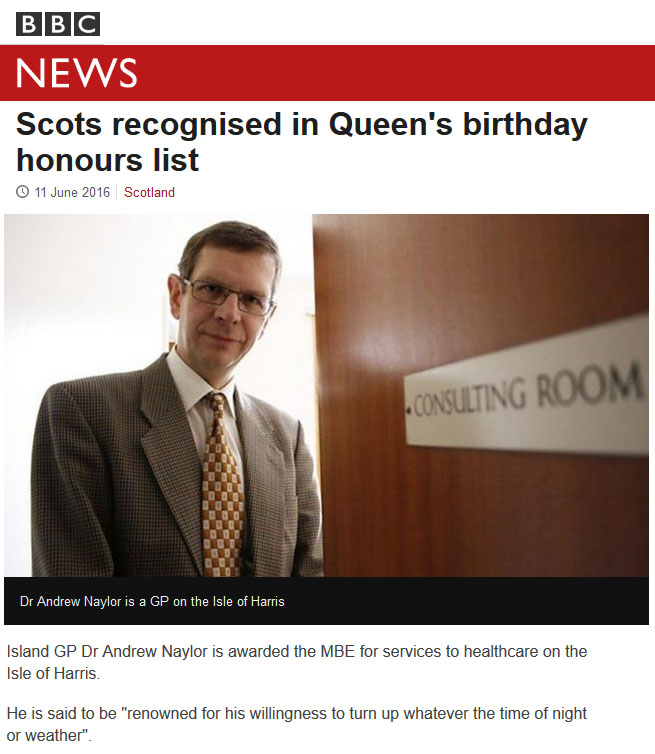 News of Dr Naylor’s MBE, as reported by the BBC

Going of on a slight tangent… in 2015 I dug my drum kit out of hibernation and spent several long weekends in Newcastle with my old buddies Pauline Murray and Rob Blamire, from the punk rock band Penetration. We were recording a new album, Resolution. A doctor friend of Pauline and Rob heard I was living on the Isle of Harris. She mentioned she’d trained with a colleague who moved to the Outer Hebrides after they’d both qualified.

A couple of days later she handed me a copy of Andrew’s entry in their year book. Apparently he had a keen interest in hot air balloons. Interesting! I’ll ask him about that one day.

Skip forward to October 2017: I was walking past Dr Naylor’s house. I spotted him in the garden. I was already planning to ask if he was prepared to be photographed for my WORK: Outer Hebrides project.

“Hello. This might sound a bit weird, but are you into hot air balloons?”.

He explained the hot air balloon reference came about as a result of a TV programme called ‘Balloon Over Yorkshire’. It was made by the BBC in 1982, while Andrew was at university. It follows film maker Sid Perou’s quest to  shoot aerial footage over Yorkshire, while dangling from a rope secured to the top of the balloon. Andrew was one of the three man recovery team. Their job was to track progress of the balloon from the ground, navigating a jeep and trailer through country lanes to locate the eventual landing spot, then dismantle and pack everything away.

Here’s a still from the programme showing Sid hanging off the side of the balloon with his film camera: 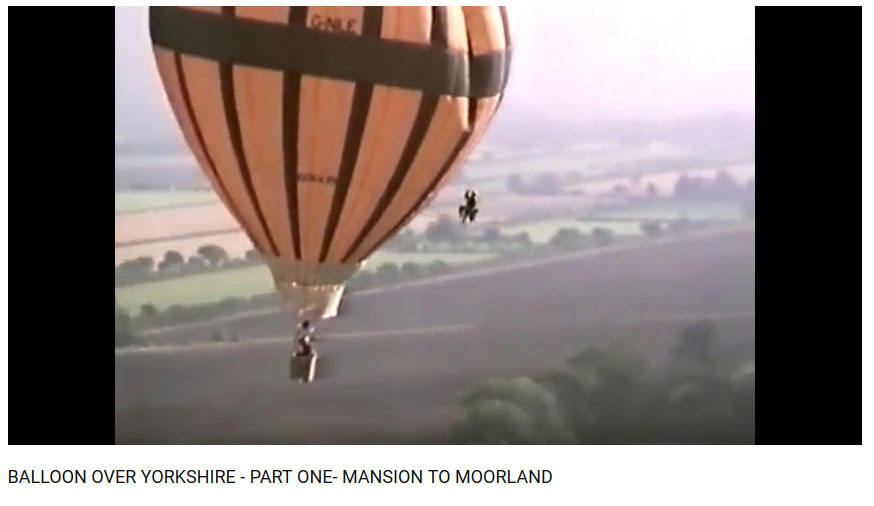 I’ve saved the best til last! The clip below starts with a young Andrew delivering his only spoken words in the 30 minute documentary. By his own admission, it’s not Oscar material, but I’m sure some his patients in Harris will find it interesting!

As with everyone who’s taken part in this photo series so far, a big thank you to Dr Naylor for his cooperation. Speaking as one of his patients, I think it’s safe to say everyone he looks after in South Harris would agree his recognition in the 2016 honours list is well deserved. We’re lucky to have him as our doctor.

The final image was made from a combination of eight separate exposures: 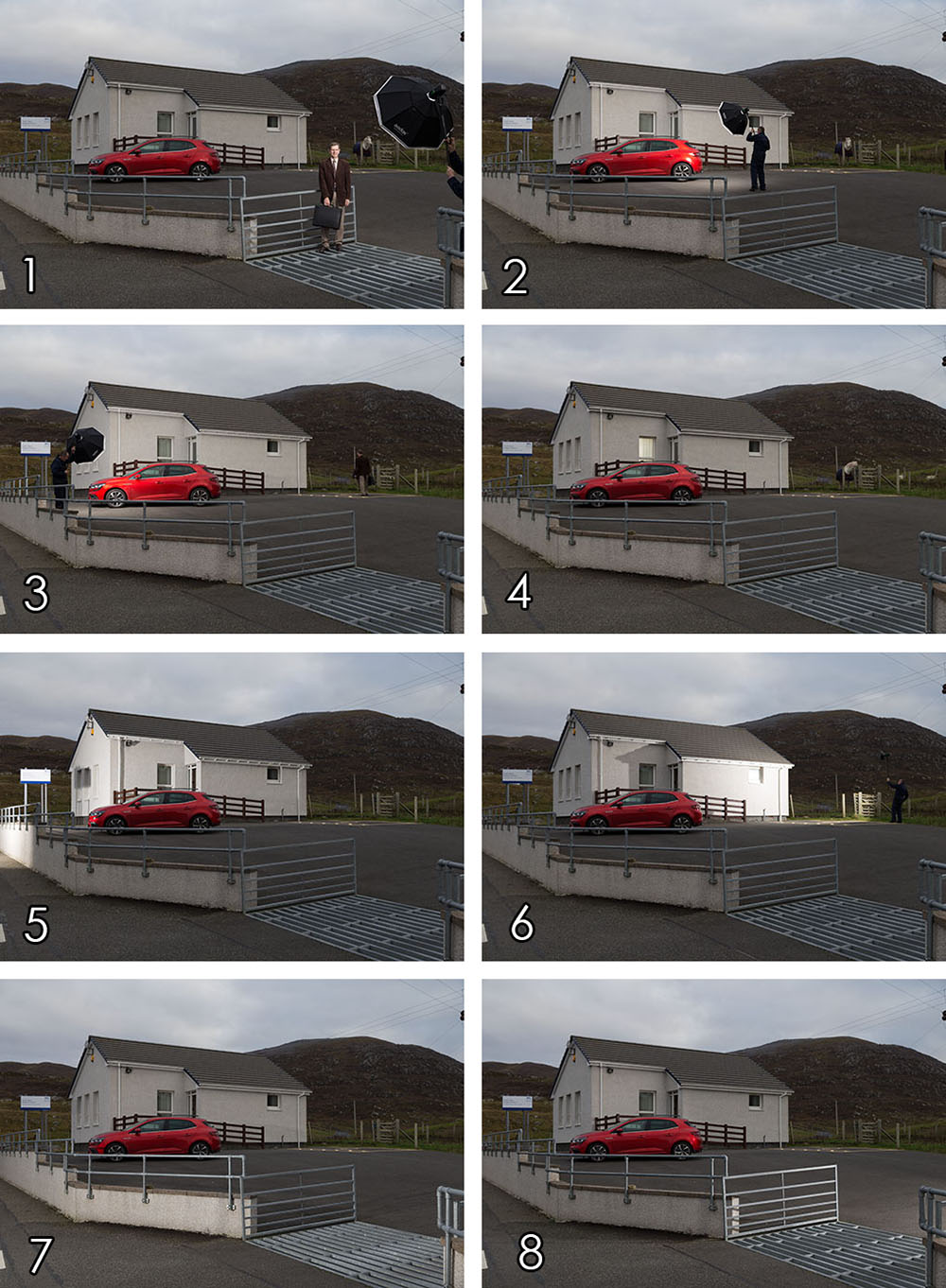 #1: First in the series – I was concentrating on getting the right light level on Dr Naylor. It took three attempts, dialing down light power on the 600 watt strobe fired into the Octabox until I was happy with the result. Dr Naylor was free to go.

#4: Switching to a beauty dish in place of the Octabox, I went inside the surgery to light the waiting room area – check the window above the roof of the car.

#5 & #6: Lighting the left and right sides of the surgery building (Charlie the horse got tired of hanging around by now).

#7: Some light on the wall and railing near the cattle grid from camera left.

#8: Lighting the cattle grid and railing from camera right.

After piecing all of the above together, this is the final result: 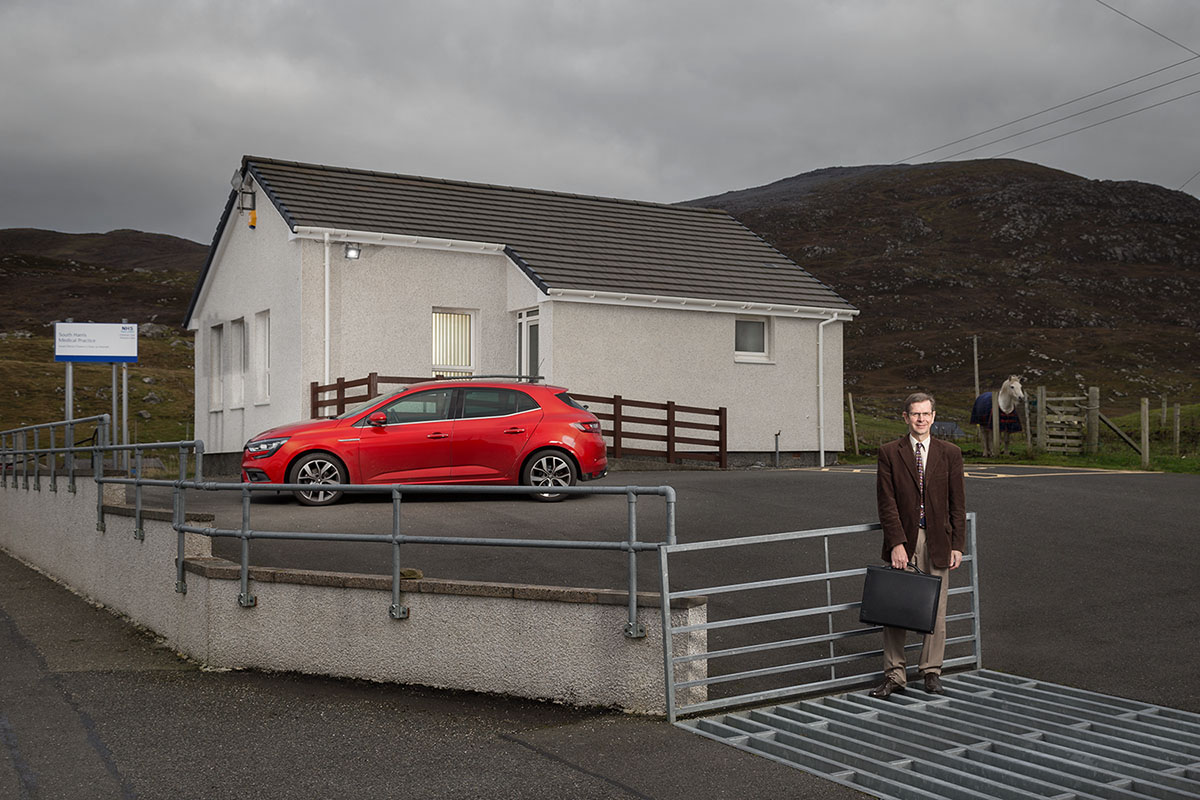