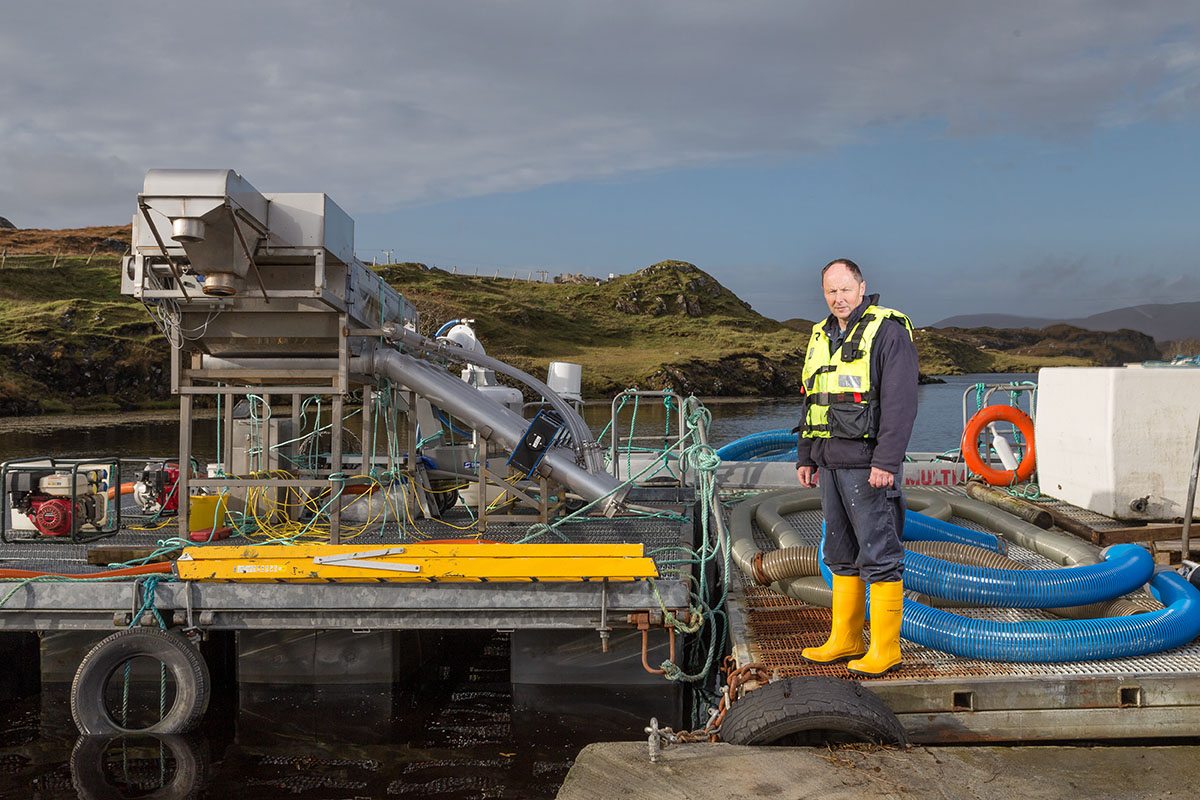 Ken has worked in the fish farming industry for over 30 years. He manages the salmon farm based at Loch Langavat, which is on the road between Leverburgh and Finsbay, Isle of Harris. He also oversees operations at Loch Huamavat – a couple of miles up the road from their Langavat base – which is where I took the photo above.

I’ve driven past Ken and his workmates literally hundreds of times over the past 15 years. I’ve seen all sorts of activities taking place both onshore and on the loch but never knew exactly what was taking place, until Ken gave me the lowdown while I was setting up the shot…

The diagram below shows the life cycle of a typical farmed salmon. When Ken takes delivery, the fish weigh approx 20 grams – referred to as Parr. 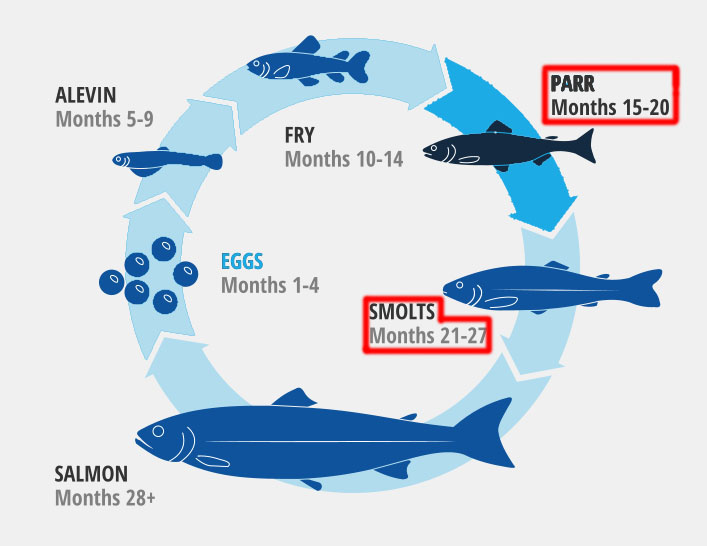 They stay in the fresh water loch until they’re Smolts, weighing approx 80 grams. The large, vintage sci-fi looking contraption in the left of the photo above is a ‘grader’. The fish are taken in at one end, then automatically sorted into four different weight categories. The smaller fish are fed accordingly, allowing them to catch up with their greedier cousins. The grader sits on a floating pontoon, which can be towed out to the various fish pens in the loch.

When the smolts have reached their target weight, they’re transferred from the fresh water loch to a ‘well boat’, for their next stop-off: a sea water pen. A helicopter is used to carry the smolts from the loch to the well boat, which was moored a few miles away near Geocrab. 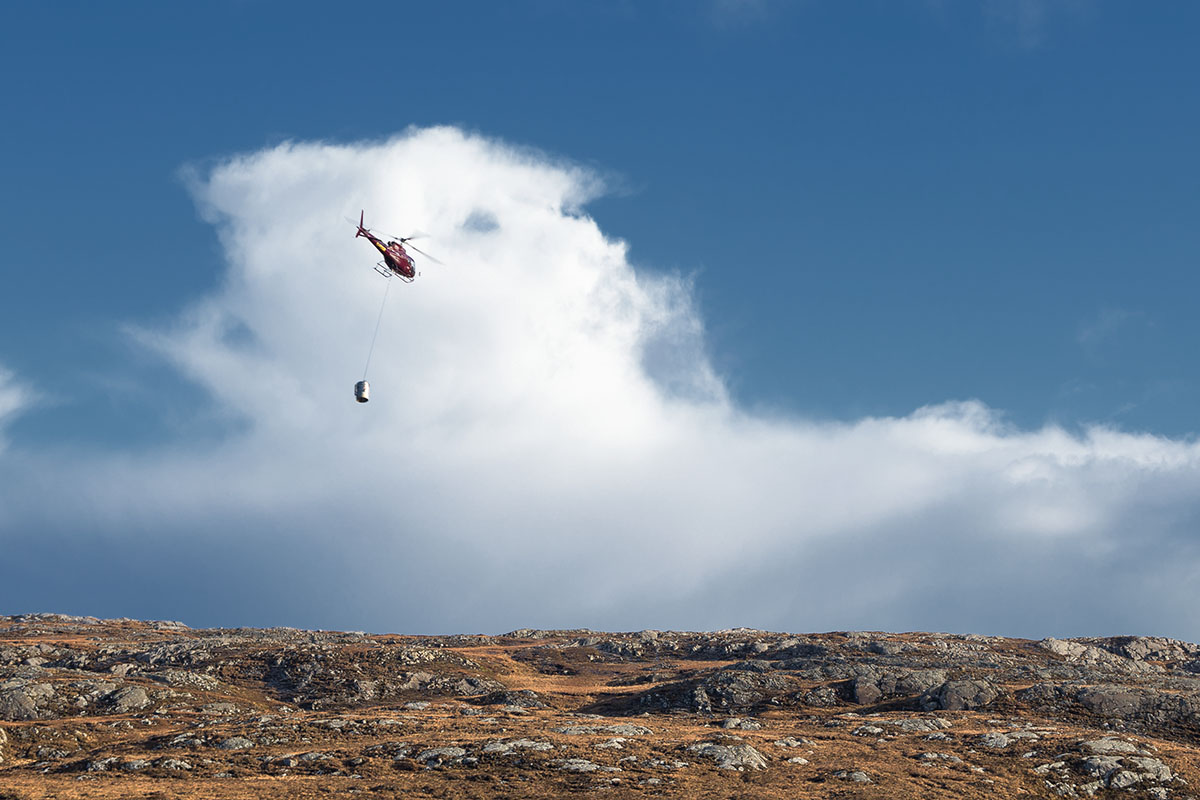 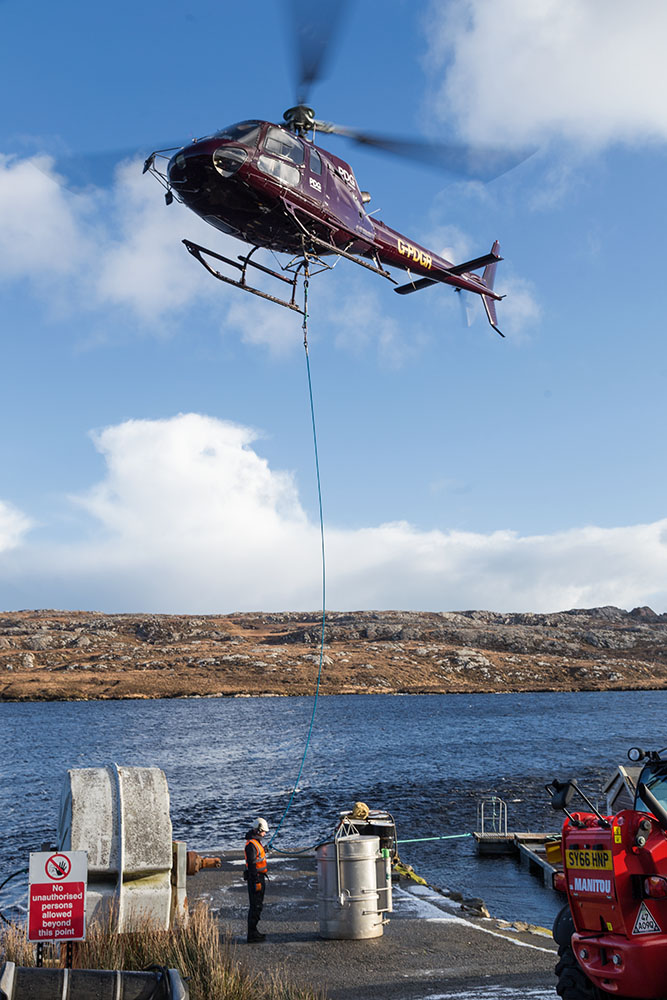 Setting off to fill an empty ‘bucket’ with smolts, for transfer to the well boat, moored a few miles near Geocrab

As mentioned earlier, I’ve driven past this place hundreds of times. I stopped off a few times when I was first experimenting with long exposure night photography. In the photos above, you can see a large circular object at bottom left. It’s one of two net washers that I photographed on a winter night in 2010: 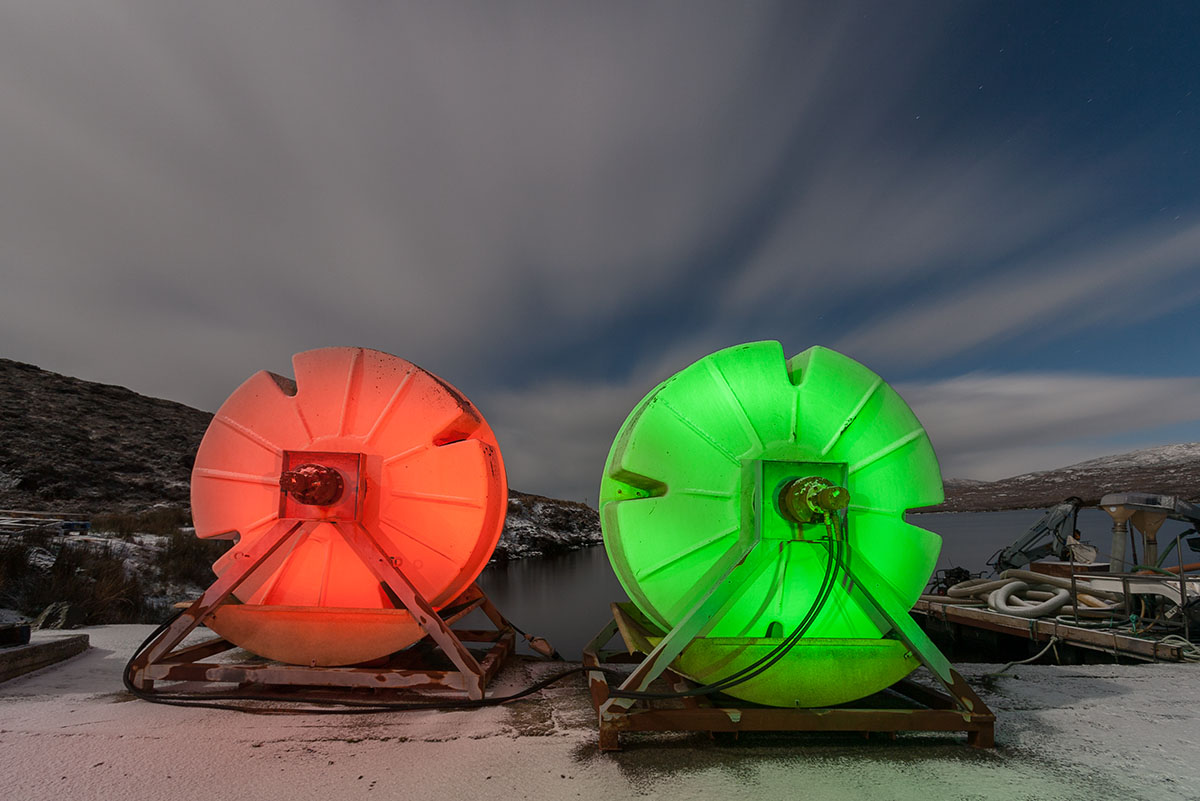 I also got a shot of their Manitou – a multi-purpose vehicle seen on many of the fish farms around the islands. They replaced this one a couple of years ago, but as you can see in one of the pics above, they remained brand loyal. 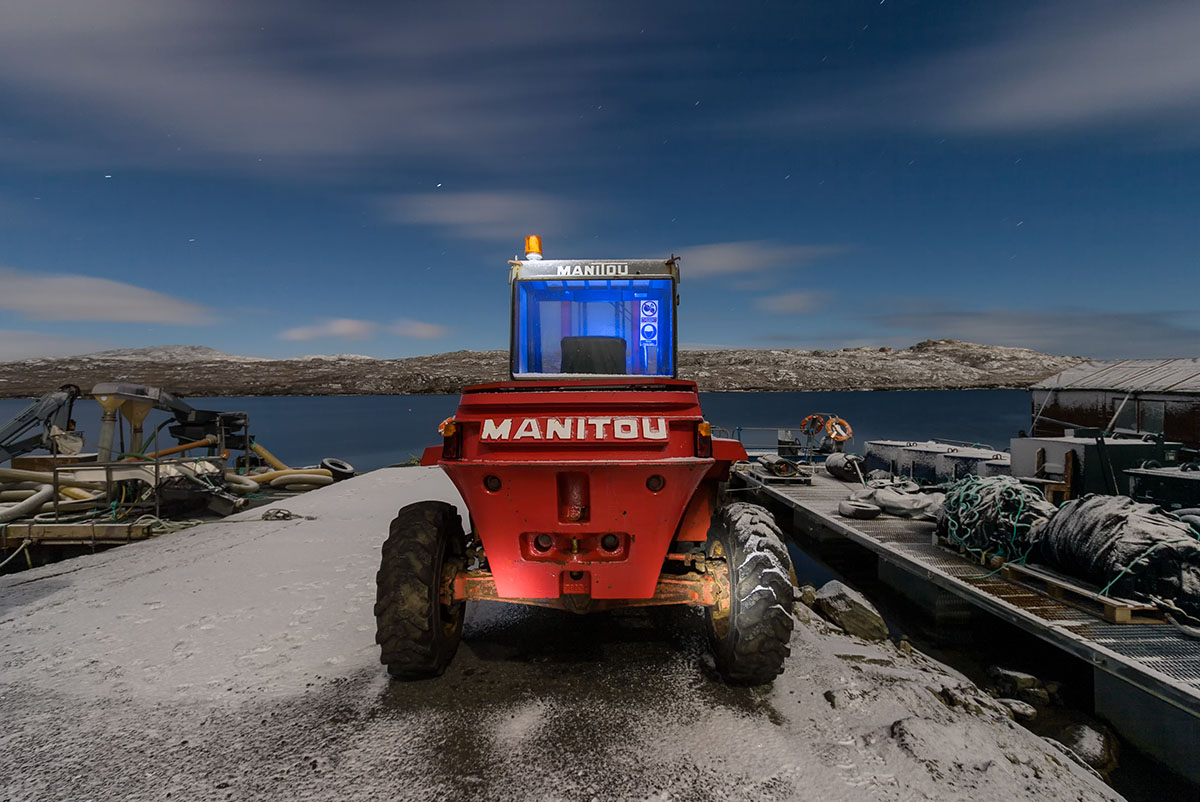 And to finish, a couple more night photos of the Loch Langavat fish farm from 2010: 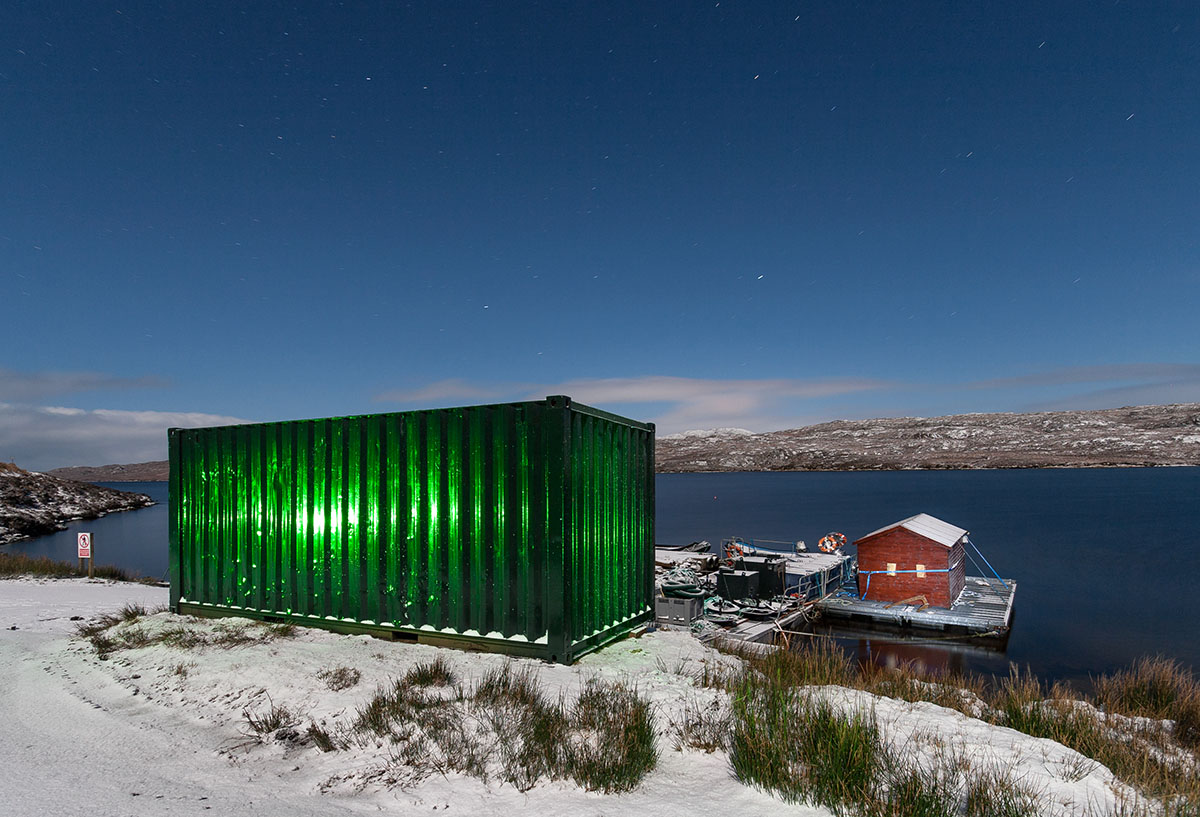 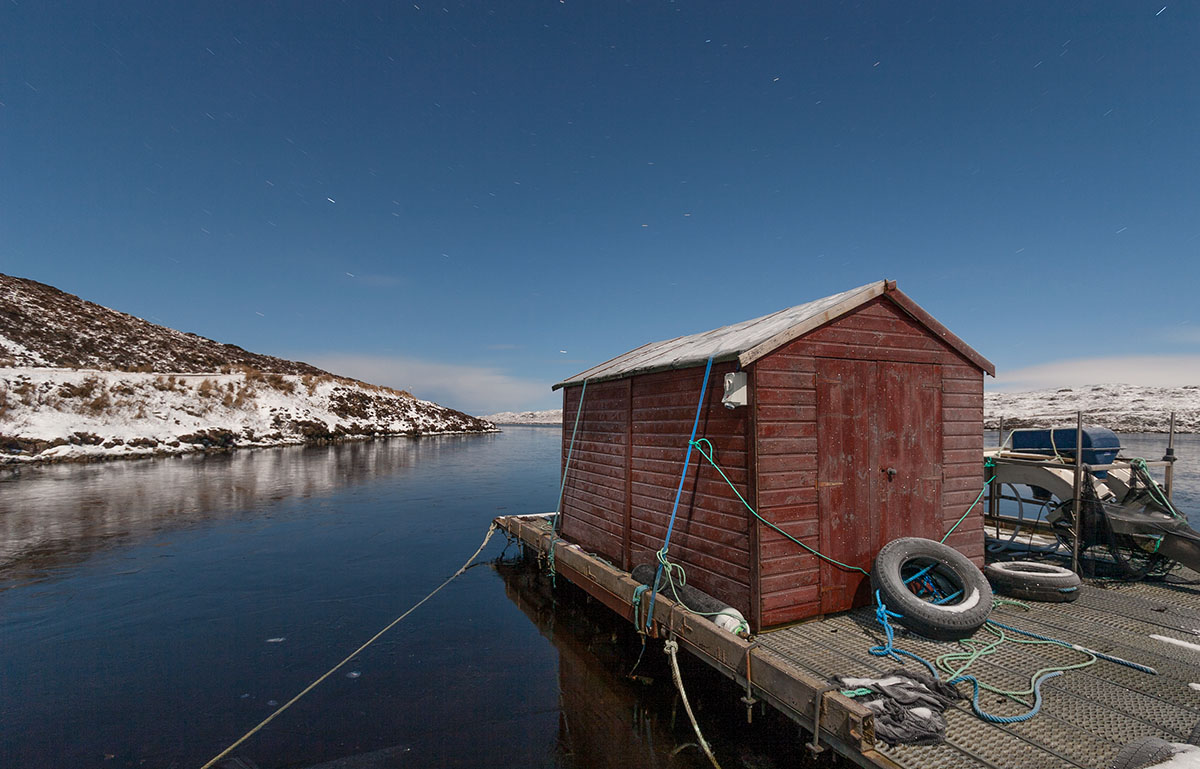