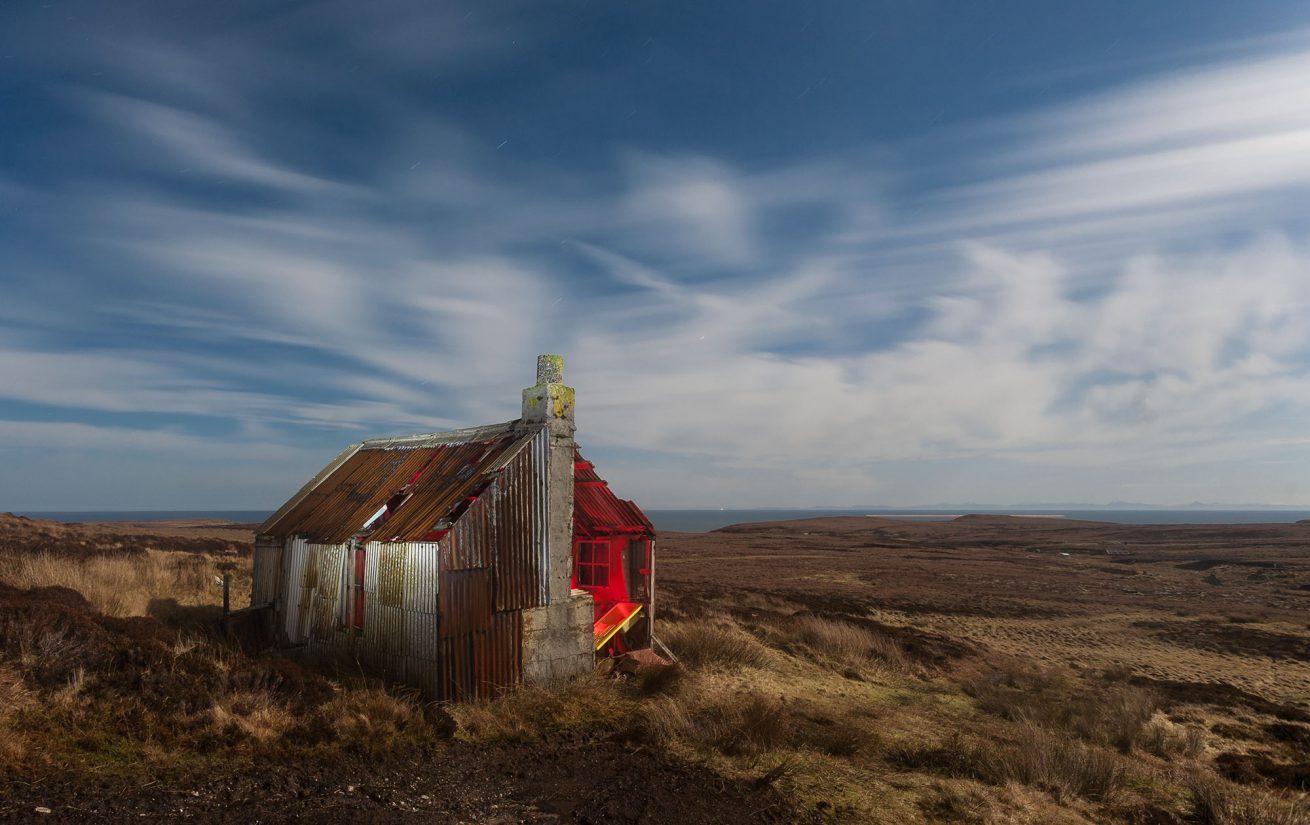 An Lanntair’s annual open art exhibition, Grinneas nan Eilean, opens tomorrow (Saturday December 3rd) and runs until January 29th 2012. Grinneas is held annually and hosts work by sculptors, photographers and artists from around the Outer Hebrides. My contribution to this year’s exhibition consists of four limited edition prints, all shot at night during 2011. Three of the prints feature shielings at Cuishader, Isle of Lewis. The fourth is of a ruined stone house in Manish, Isle of Harris. The photos in question gained a little publicity in the Scottish media over the past week as a result of my association with the newly opened Grasshoppers Hotel in Glasgow.  The photos are shown further down this page, but first the hotel’s official press release:

A new luxury arts hotel in the heart of Glasgow is wowing guests with its striking images of Lewis and Harris.

Grasshoppers Glasgow, a new penthouse hotel overlooking the city’s Central Station, is showcasing works by former Buzzcocks drummer John Maher, now a Harris based photographer – one of a series of artists promoted by the hotel.

Maher became a hit with guests after Grasshoppers owner Barrie Munn invited him to showcase his work in the hotel. A selection of Maher’s night time images of Lewis and Harris adorn the hotel’s corridor walls, alongside engravings of Glasgow produced by well known Scottish artist Ian McNicol, screenprints by Glasgow based artist Rachel Duckhouse, and striking images of Glasgow’s Buchanan Street by Ayrshire artist Michelle Campbell.

Three of Maher’s evocative photographs are on display – two of ruined Sheilings at Cuishader, Ness on Lewis, and another of a derelict stone house in Manish, Harris.

He said: “It’s fitting that we should showcase artists from across the country at Grasshoppers because Glasgow is very much a gateway to the rest of Scotland, and has such a strong affinity with the Western Isles. We have an opportunity to promote Scottish artistic talent to guests from across the UK, Europe and beyond. Our art displays have become something of a talking point for guests, particularly John’s stunning night-time images of Lewis and Harris. When we explain that they’re the work of the former Buzzcocks drummer, now living in Harris, they’re amazed!”

Maher himself recently stayed as a guest at the hotel.

He said: “I think it’s wonderful that a hotel in the centre of Glasgow is choosing to showcase images of Lewis and Harris to its UK and international clientele. I was delighted when they asked if I would like to display some of my prints at Grasshoppers. It’s great exposure for the Western Isles. Having stayed at Grasshoppers myself, it’s good to see a Scottish hotel showcasing Scottish art in a way that reaches such a diverse audience.”

The 30 bedroom boutique hotel is located on the sixth floor of the city’s historic Caledonian Chambers building, overlooking Central Station, built by celebrated Glasgow architect James Miller, the visionary behind many of Glasgow’s best loved buildings.

The derelict top floor of the building was painstakingly refurbished and transformed into a £1.25 million boutique hotel, in a joint venture with Network Rail.

The stylish, comfortable bedrooms enjoy views across Europe’s largest glazed roof overlooking Central Station and across the city to one of Glasgow’s masterpiece buildings by Charles Rennie Mackintosh, the Light House.

The hotel’s central location, sandwiched between Buchanan Street and the International Financial Services District, and its focus on service, style and value – rooms are available from just £85 per night – have proved a winning formula with business travellers and holidaymakers.

The new hotel has become a firm favourite on TripAdvisor, overtaking leading international brands to become one of the top rated hotels in Glasgow.

Mr Munn said: “We are amazed and very humbled at the response we have received from our guests, who have really warmed to the Grasshoppers approach of providing service, comfort and value for money.

“In a market dominated by international chains, it’s difficult for smaller, independent hotels to make their mark. We’ve tried to create a different kind of hotel, with many of the comforts of a traditional luxury hotel but where the feeling of home is central to the hotel experience. It is essential to Grasshoppers that our guests feel at home throughout their stay.”

Councillor Gordon Matheson, chair of Glasgow City Marketing Bureau and Ayrleader of Glasgow City Council, said: “Glasgow has an outstanding range of top-quality hotels, and I am delighted by the success of Grasshoppers as one of the latest additions to this roster.  As the city becomes an ever more popular tourist destination, our ability to offer a range of hotels becomes very important, and a penthouse hotel such as this plays a vital role. I wish Grasshoppers Glasgow every success in the future.

I made Cuishader Green larger than the others because I wanted people to see the ‘happy faces’ carved into the  concrete scratch coating on the walls. It was only when I was viewing the photo on my monitor the day after I took the photo that I noticed the figures on the wall. They don’t show up on an A3 print but you can see them on the 36″ x 24″ print. Here’s a close-up:

Happy Faces on the wall at Cuishader

By way of contrast, I’ve included one photo shot during daylight hours, albeit indoors and using a couple of flashguns. It’s a framed print of  an abandoned house in Geocrab, Isle of Harris:

“One day son, all this will be yours”

If you’re in Stornoway on Saturday Dec 3rd, come along to the official opening at 5pm and check out the happy faces.