A tale of two cinematic controversies – with more than four decades between them – are the start and finish points for this short photo tour of Stornoway town centre. Some religious and film references scattered throughout. 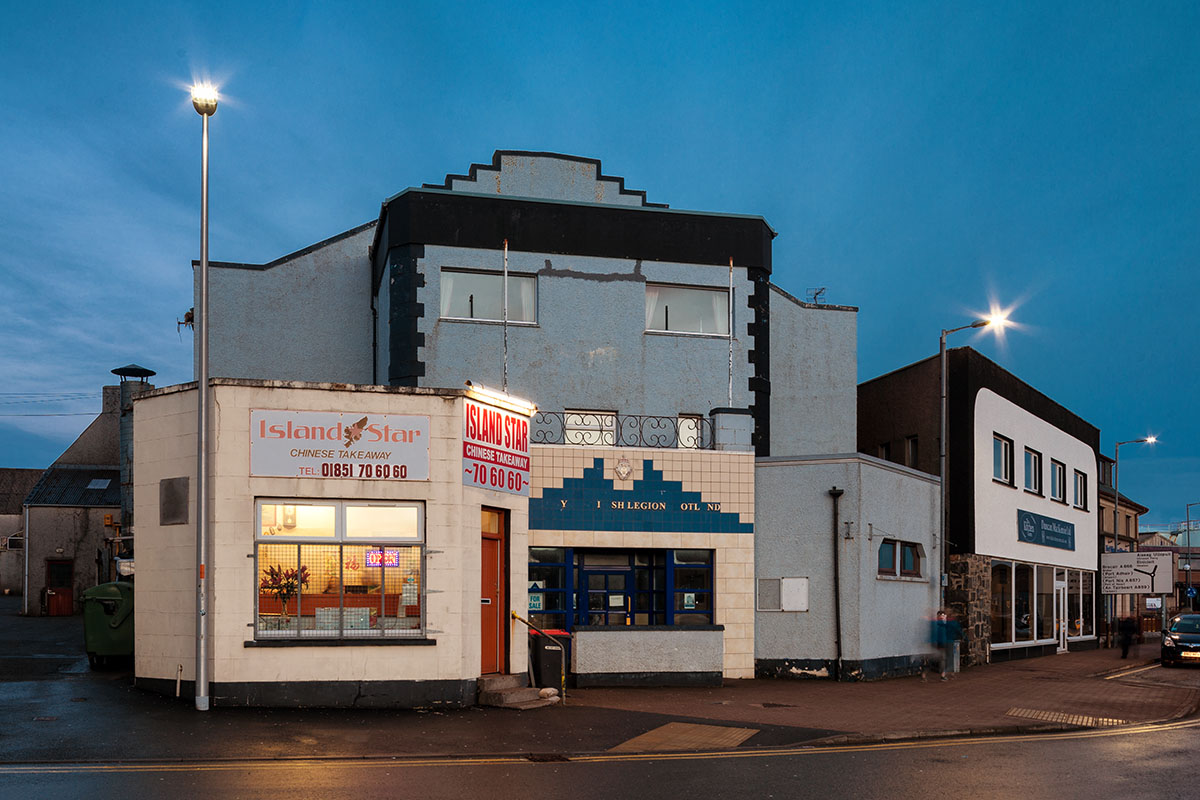 Stornoway’s Playhouse opened in 1934. Popular myth has it that the cinema went out of business in the mid 1970s, shortly after a  Free Presbyterian minister put a curse on the theatre manager, following his refusal to cancel performances of the latest blockbuster movie of the day, ‘Jesus Christ Superstar‘.

Cutting from the Stornoway Gazette at the time of the controversy

The letter from the minister stated: “I have a message from God for you: ‘If any man love not the Lord Jesus Christ, let him be anathema maran-atha’.

“That awful curse lies upon you now. It will lie upon you at death and to all eternity. Your breath is in the hand of Christ, the one to whom you must render your account – for we must all appear before the judgement seat of Christ. He is the one who says ‘I am he that liveth and was dead, and behold I am alive for evermore and have the keys of death and of hell.’

Your only hope is to cancel immediately the blasphemous film ‘Jesus Christ Superstar’ and to cry to Christ for mercy. Repent and turn from all your transgressions, so iniquity shall not be your ruin.”

After the showing of the film, the manager said attendance had been as usual.

Shortly after the Jesus Christ Superstar incident, new fire regulations were introduced. The cinema’s owners decided to sell instead of spending money to carry out the necessary upgrades. The new owners ran the cinema for several years before selling the building to the Royal British Legion.

So while the issuing of the so-called ‘minister’s curse’ actually took place and captured the headlines, it wasn’t the reason for the cinema’s closure. 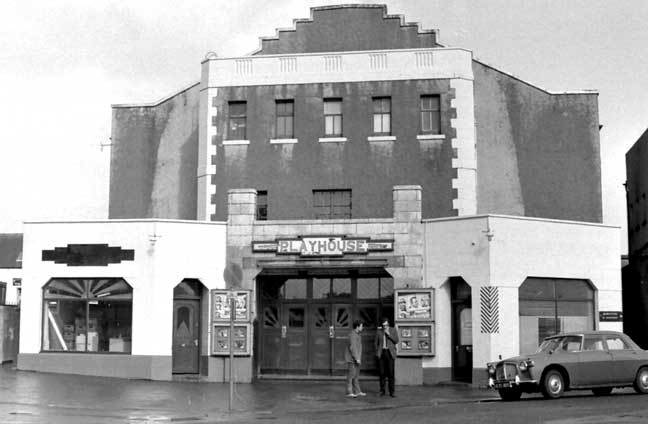 Stornoway Playhouse in 1973 – prior to the ‘curse’. Photo: www.scottishcinemas.org.uk

The next stop on my 30 minute twilight trip around town was at the junction of Point Street and Cromwell Street – a pedestrianised part of town known as The Narrows. 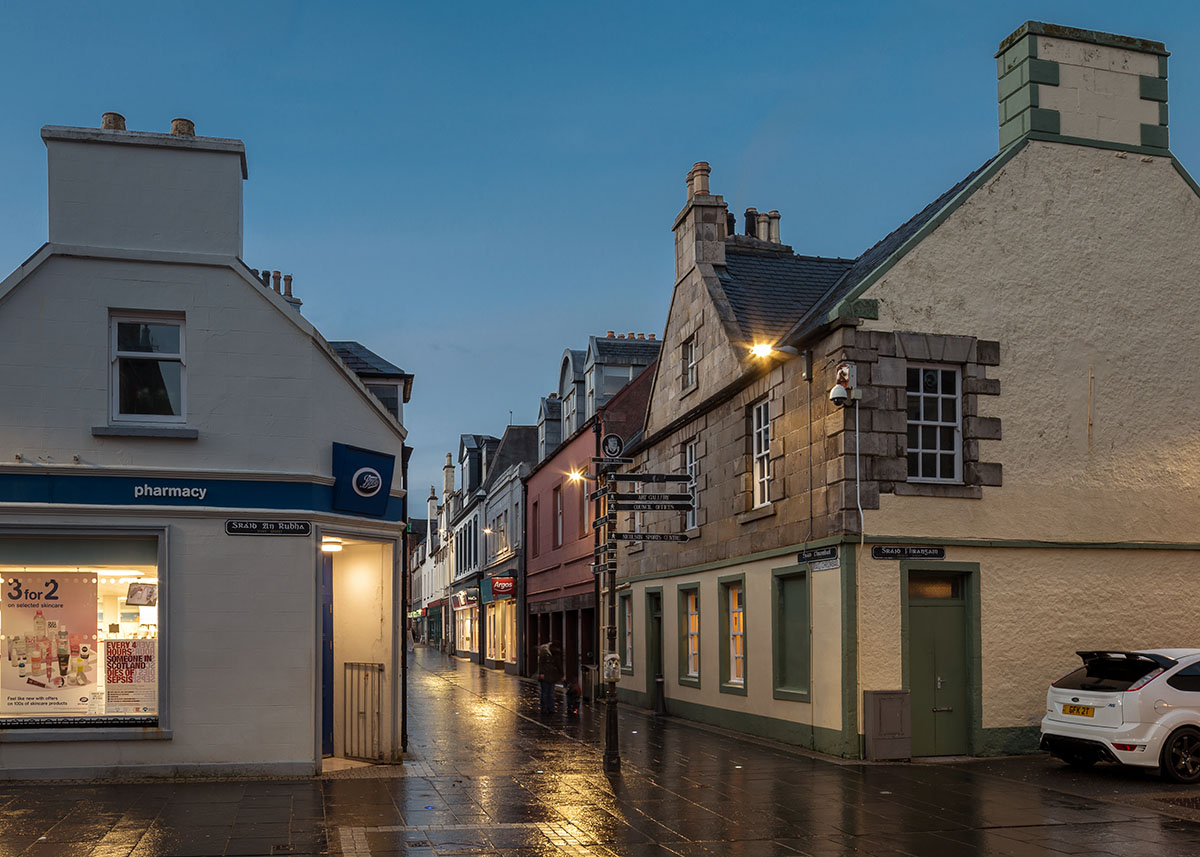 I don’t have a cinematic (or religious) reference for this shot, although the location does appear in Peter May’s novels, The Lewis Trilogy.

A little further up Point Street is another great looking pub, The Criterion, more often referred to as ‘The Crit’: 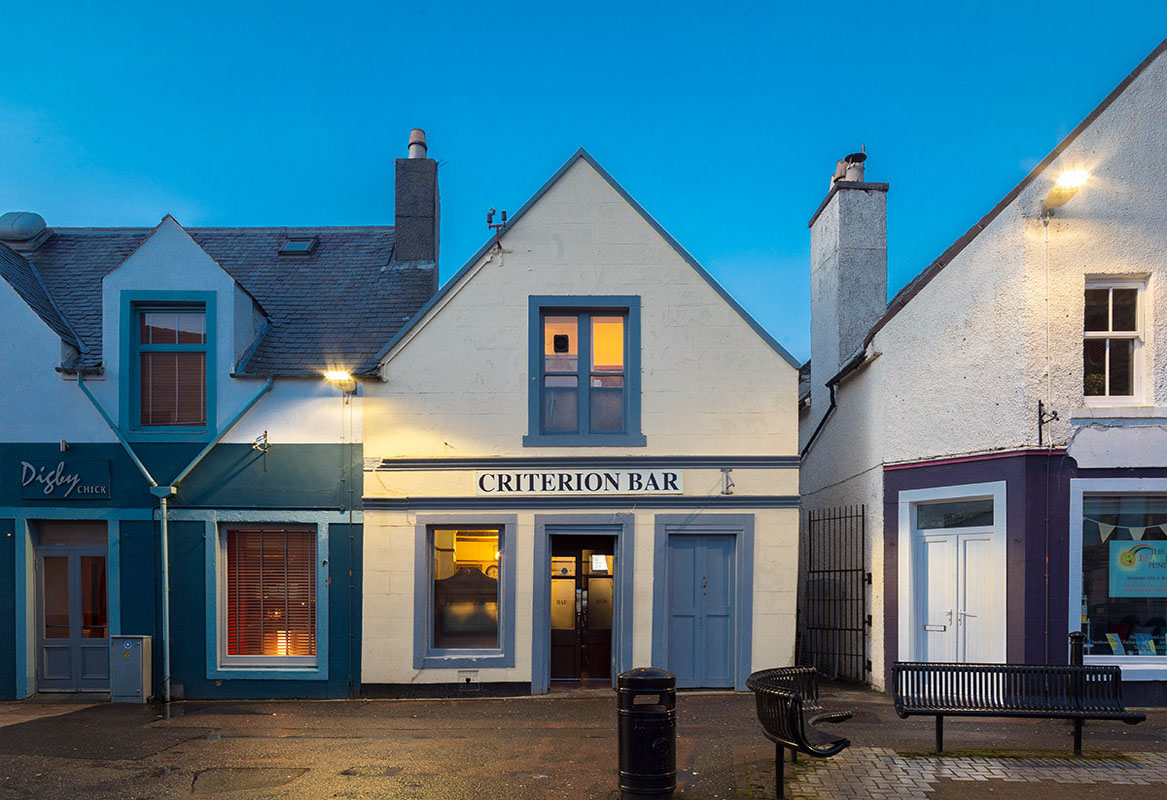 The Criterion – aka ‘The Crit’. Point Street

I’ve already mentioned this is a pedestrianised part of town – I was shuffling my tripod around in the middle of the street, trying to do all the arty-farty stuff it takes to frame the shot how I wanted. Before I was done, a police van cruised into the scene from camera left, by Digby Chick’s restaurant (excellent food by the way). I picked up my camera and tripod and moved to one side to let the two policemen drive by. The van pulled up beside me. The driver wound down his window.

“What are you doing?”

I glanced at my camera. “Take a wild guess”¹, I replied.

I heard a faint snigger from the direction of the passenger seat. Fortunately I wasn’t arrested and charged with being a smart-arse. He wished me good luck with the rest of my evening, then the pair of them continued about their business.

Moving on, my next stop was Iceland: Stornoway’s latest supermarket. Cue corny jokes about the price of alcohol and geezers. 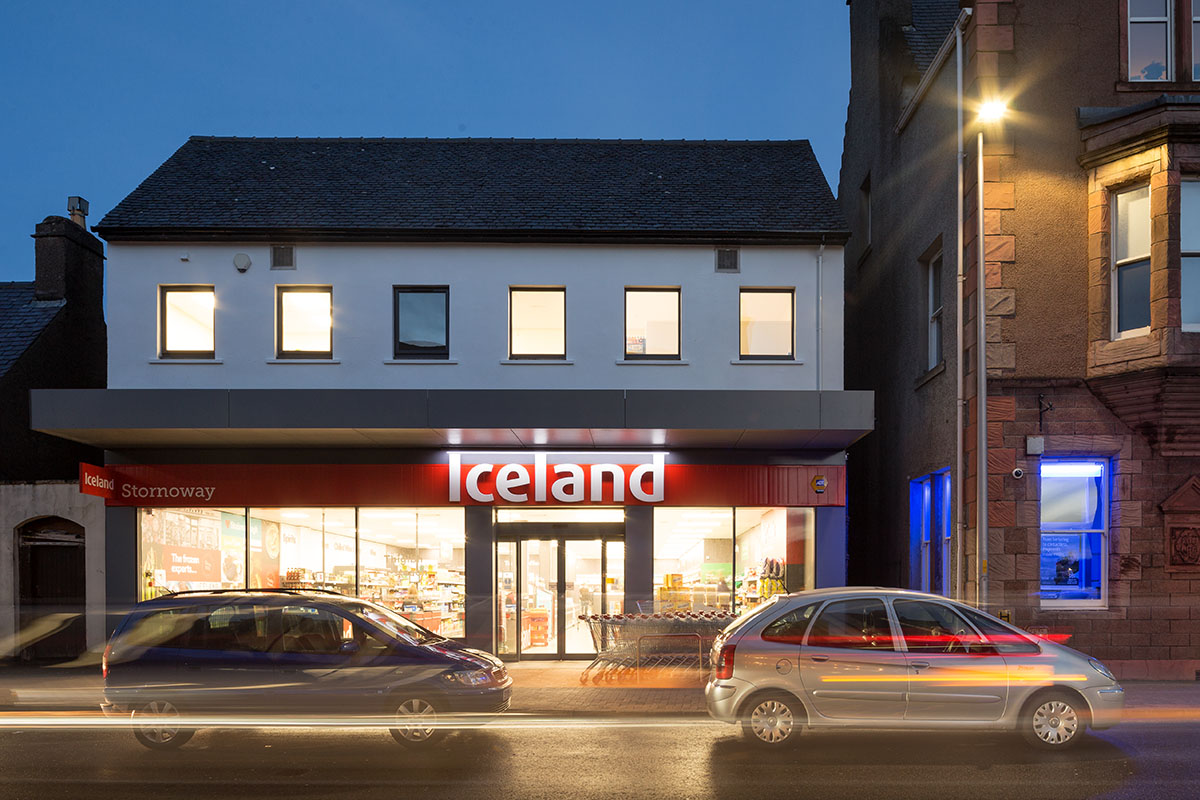 Walking a little further up Cromwell Street from Iceland, I turned into Church Street and past the police station. Next door is the second Chinese takeaway of the night: Peking Cuisine. 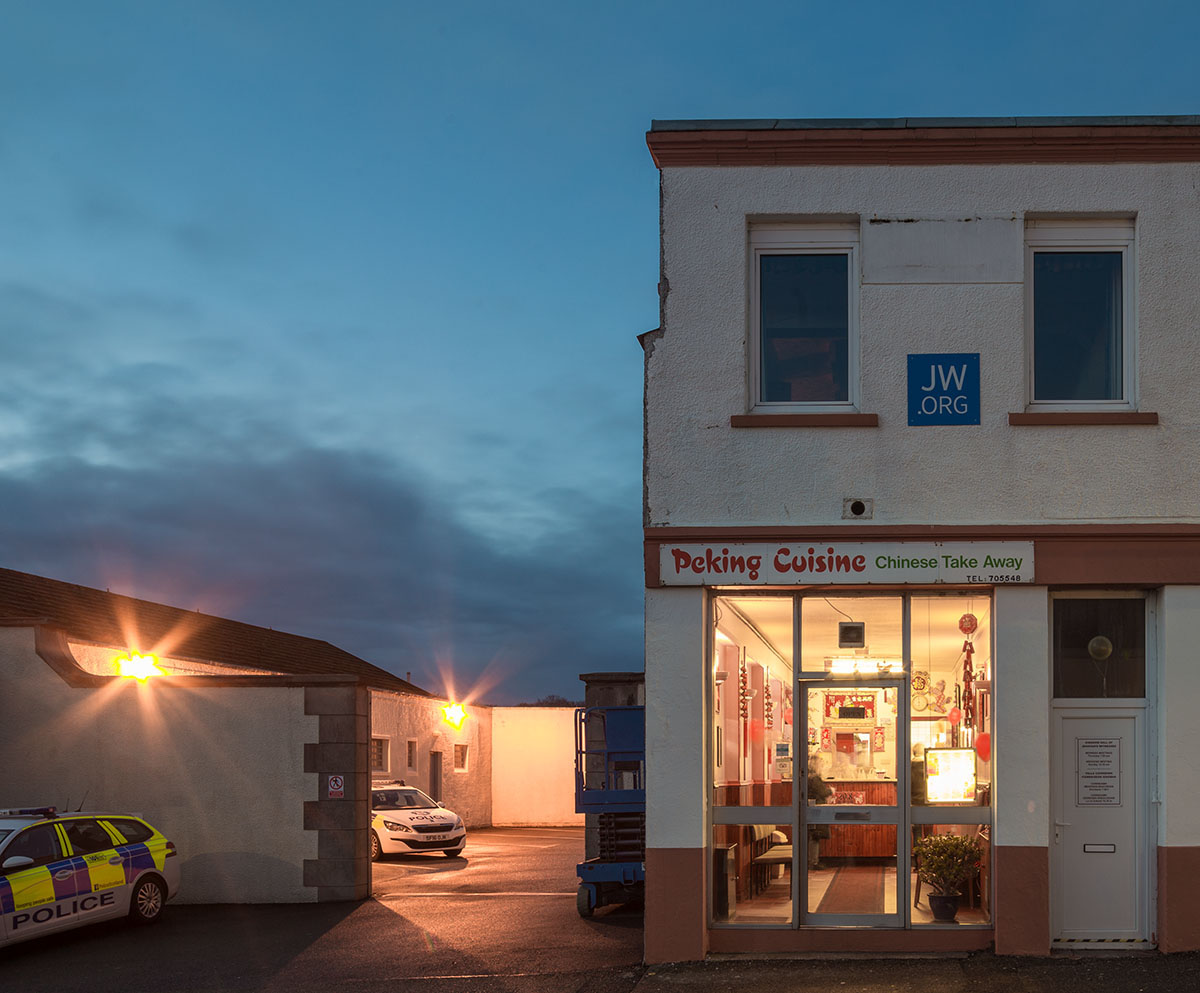 I’ve walked past this shop countless times before but this was the first time I noticed that square blue sign between the two first floor windows. There aren’t many domain names with just two initials, so it must be something special. I typed it in to the browser and voila! It takes you to the home page of the Jehovah’s Witnesses website. Could come in handy for the police and the folk running the takeaway having them on the doorstep, so to speak.

It was starting to get a little too dark now. In another ten minutes or so the I’d lose that hint of blue that was still visible in the sky. A few yards from the police station, there’s a charity shop on the corner of Church Street and Kenneth Street. 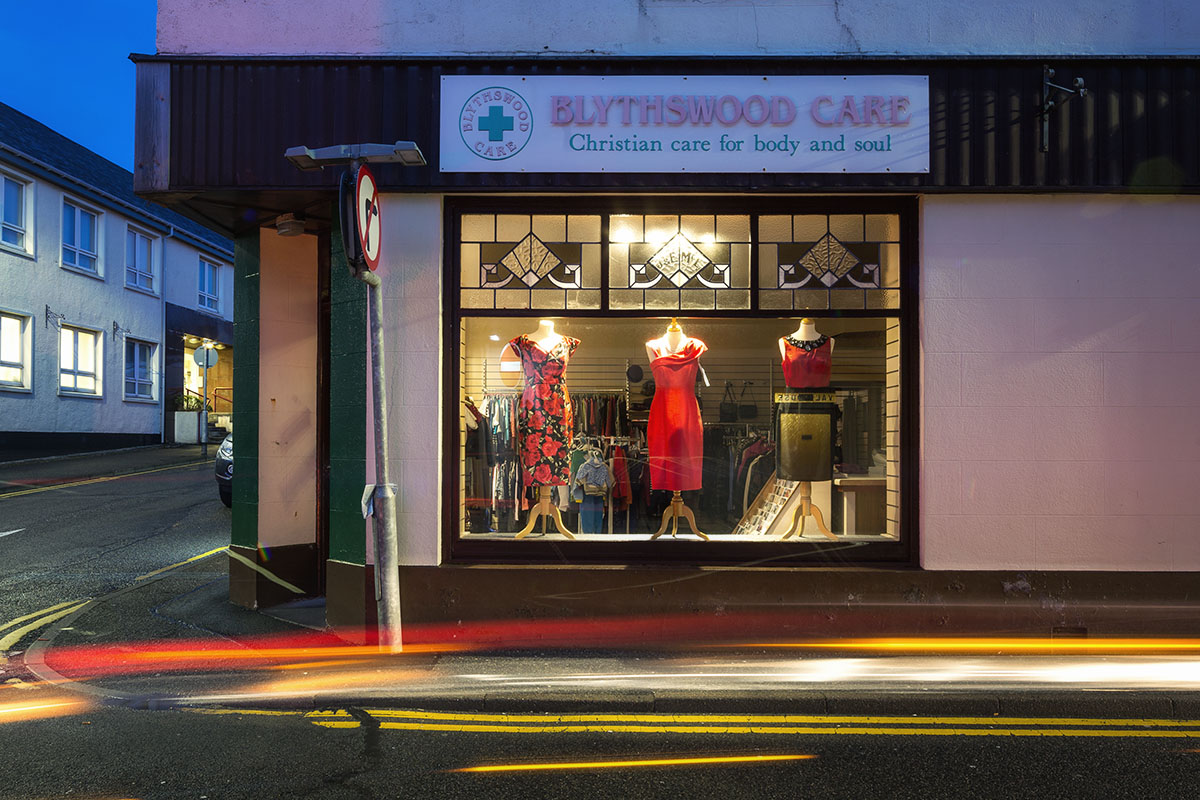 Back in the day it was a bakery. The original windows still feature the owner’s initials: ‘J & E McL’. At a stretch, there was a kind of Edward Hopper – Nighthawks thing going on, but with mannequins.

Sticking with the film theme, and having recently seen the Oscar nominated ‘Three Billboards Outside Ebbing, Missouri‘, [spoiler alert: implausible script, totally overrated], I came up with a low budget local version: ‘Three red dresses inside a charity shop, Stornoway’.

From here, it was a short walk down Kenneth Street to load everything back into my van. But not before passing An Lanntair, which is literally across the street from the old Playhouse where I started this tour less than half an hour earlier. 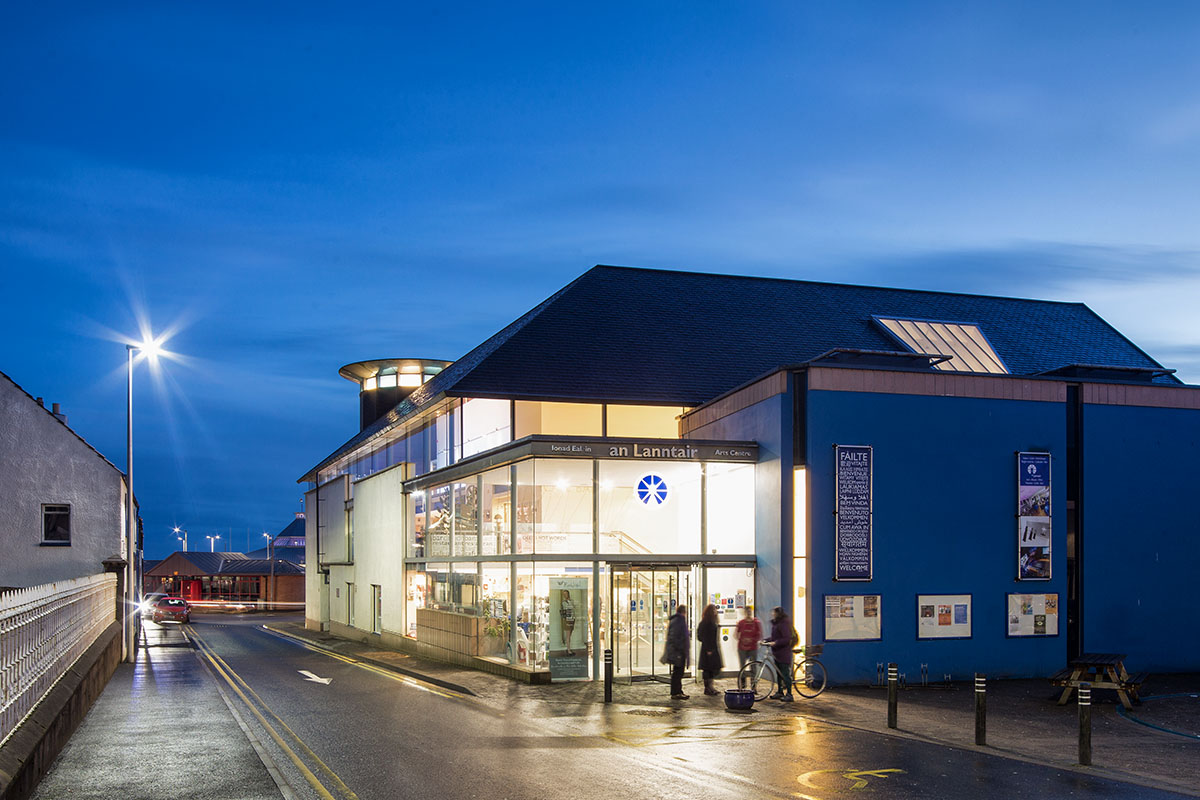 In common with it’s now defunct next door neighbour, An Lanntair has been involved in a much more recent row centred around religious beliefs and the screening of films. This time it’s not about a specific movie. Instead, the controversy arose over An Lanntair’s decision to run trial screenings on a Sunday – a first for the island. The pilot took place at the end of January, when they showed ‘Star Wars: The Last Jedi’ to a full house. No curses have been issued (to the best of my knowledge), but as with the introduction of Sunday ferries and Sunday flights, the spat has attracted its fair share of media attention, both locally and nationally. 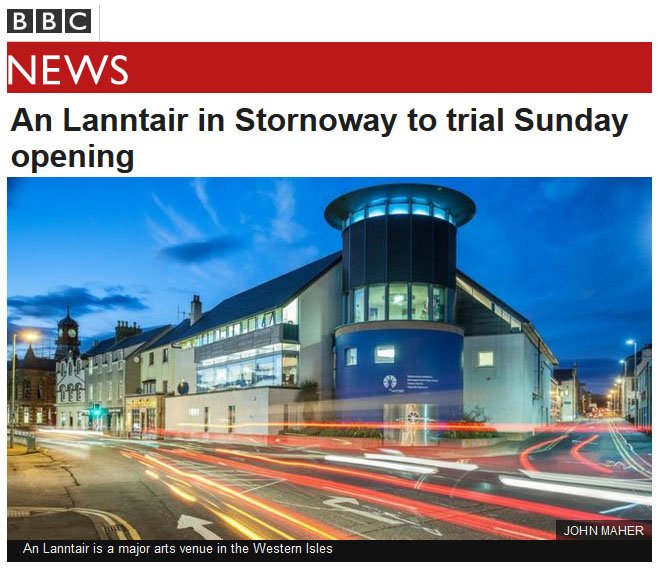 An Lanntair to trial Sunday opening

The whole matter has been the subject of heated debate on social media, various blogs and even on TV. The BBC were good enough to use one of my photos of An Lanntair to illustrate the story.

If you insist on delving deeper, here are a few links for starters:

BBC News: An Lanntair in Stornoway to trial Sunday opening
Hebrides Writer: An Lanntair must not become a beacon for the Secular Society
The Guardian: God knows, a day of rest is not to be sneered at

If you’ve made it this far, you may have noticed I’ve steered clear of declaring my own thoughts on the matter. Until now.
Having read many of the arguments on both sides, including veiled ‘local’ vs ‘incomer’ threads, the well meaning ‘voice of reason’ posts and everything else in between, I’ve discovered I have something in common with the vast majority of participants in this conflagration i.e. I am not prepared to budge one fraction of a millimeter from the stance I adopted more than forty years ago…

Jesus Christ Superstar and Star Wars are both rubbish!