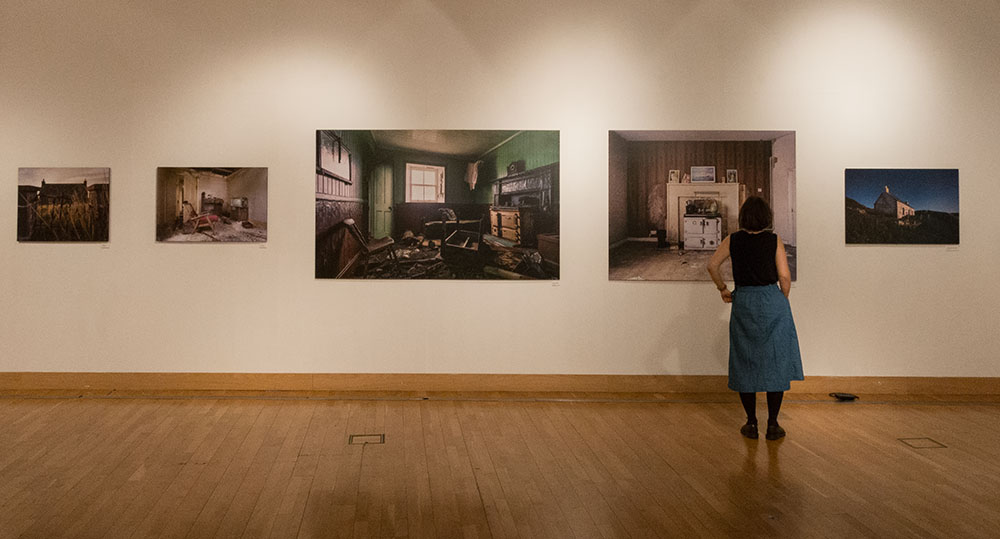 52 hours in Glasgow: a tale of two radio interviews, an exhibition opening, chatting on the telly and wasting time in the clouds above Benbecula.

Wednesday July 20th
6.00am: set off to Stornoway airport to catch the 8.25am direct flight to Glasgow. The plan was to arrive in Glasgow at 9.25am, head straight to The Lighthouse to oversee and help hang all the prints for the official opening of Nobody’s Home the following day. I get to Stornoway airport in plenty of time, only to be told the flight has been cancelled for ‘technical reasons’. No big deal – I’m put on a flight to Benbecula instead, to catch a connecting flight to Glasgow, which will arrive three hours later than the original schedule. Coming in to land at Benbecula, the pilot aborts the landing due to poor visibility. He announces we have sufficient fuel to circle above Benbecula for 30 minutes, in the hope conditions will improve. Fifty minutes later he’s back on the tannoy. Apparently the weather has worsened. We have to return to Stornoway.

Eventually land in Glasgow at 2pm. I get a taxi to The Lighthouse and spend 15 minutes figuring out where each print should be hung before being taken to the BBC Scotland studios at Pacific Quay for a live interview with Janice Forsyth on her Culture Studio radio programme.

Coincidentally, as you’ll hear in the interview, it’s 40 years to the day since Buzzcocks played their first gig – supporting the Sex Pistols at Manchester’s Lesser free Trade Hall.

Thursday July 21st
Back to The Lighthouse to continue the job of hanging prints. My thanks to Michael, who was hired in by Architecture & Design Scotland for a couple of days to do all the hard work. He did a great job! Also had a team meeting with The Lighthouse staff to tell them a little about the images in the exhibition, so they could pass on info to inquisitive visitors.

The doors open at 6pm. All 100 tickets to the opening were snapped up in advance. The event was introduced by Karen Anderson, chair of Architecture & Design Scotland. My talk was followed by an excellent presentation from Brian Whitington, project manager of Tighean Innse Gall (the Western Isles’ housing body). Brian is the man behind using my images to attract the the Carnegie Trust and a grant of £50,000 to kickstart a project that aims to put some of the abandoned homes scattered around the Outer Hebrides back into use.

This little booklet, Living Demonstration Homes for the Western Isles, neatly summarises the scheme. Based on recent discussions I’ve been a part of, it’s looking increasingly likely work will start on the first house in the near future.

Living Demostration Homes for the Western Isles. This 12 page booklet summarises the project.

Brian also showed this short video, which was put together by the project’s architect, SBA Architects, to illustrate how one of the derelict houses could be transformed to provide super insulated, energy efficient housing.

Following Brian’s presentation, we had an informed and entertaining Q&A session with an enthusiastic crowd. It was a great event!

Friday July 22nd
Up bright and early for a radio interview with Gary Robertson on Good Morning Scotland. Surprised to hear the interview start with a verse and chorus from Orgasm Addict, considering this was being broadcast live by the BBC at 8.40am!

An hour later, I get a call from BBC reporter Huw Williams. He wants to do something for that evening’s TV news, Reporting Scotland. We meet at The Lighthouse and film a short piece about the photos and the renovation project. While I’m waiting for Huw and his cameraman to turn up, a little old lady taps me on the shoulder and asks if I’m the photographer. She’d heard that morning’s radio interview, and hearing mention of the ‘Outer Hebrides’ decided to check out the exhibition, never having visited The Lighthouse before.

TV interview over, I had just enough time to visit Street Level Photoworks, Glasgow’s main photo gallery and workshop before heading for Glasgow airportand the flight home. After a guided tour of SLP, director Malcolm Dickson guided me round the corner to peer through the window of Mohair: a barbershop specialising in beards only. City life.

No flight delays on the way home. Departed Glasgow on time at 5.25pm, arrived in Stornoway at 6.30pm. I stopped off at the Co-op before driving south to Harris. I was reminded of my scheduled appearance on that evening’s news programme, when a woman came up to me at the checkout and said: “Just saw you on the telly. It was good.”

[message_box title=”SPECIAL THANKS…” color=”red”]… to Morag Bain, Anja Ekelof, Danny McKendry and the rest of the team at Architecture & Design Scotland for all their hard work in making this exhibition happen. Thanks also to all the staff at The Lighthouse – a cracking venue, right in the centre of Glasgow.[/message_box]

To round off, a selection of photos I took in and around The Lighthouse during my brief but enjoyable stay in Glasgow.

View from the top of The Lighthouse’s Mackintosh Tower

Nobody’s Home, at The Lighthouse

Nobody’s Home, at The Lighthouse

4 thoughts on “Nobody’s Home in Glasgow”