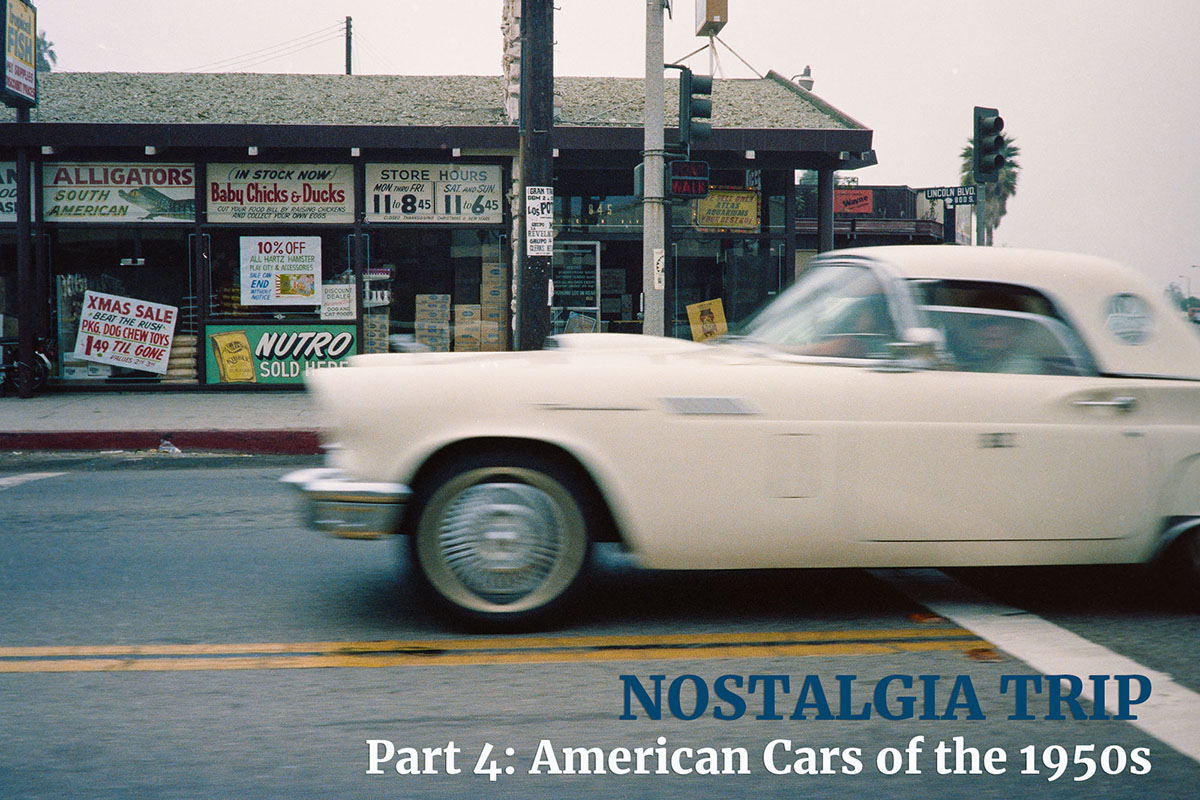 Part 4 of a nostalgic look back at a collection of photographs I took with my Olympus Trip camera while touring America in 1979 and 1980.

Looking through the 200 or so photos I took during while touring America, a fair portion of them feature cars. I’d been a fan of 1950s American cars for a while. Shortly before our first US tour, I purchased a couple of books that covered vehicles from this era. I spent hours studying the contents, familiarising myself with the various makes and models produced during the golden decade of American motoring. By the time we landed at JFK in August 1979, I was a dab hand at identifying both the make and year of manufacture of most fifties’ cars I spotted on our travels, especially those produced between 1955 and 1960. It was a solo pursuit – nobody else in the band or crew was impressed with my new found knowledge.

Revisiting these photos 40 years later, I’ve discovered my car spotting skills are a little rusty. Fortunately I’ve still got my well-thumbed copy of Tad Burness’s ‘American Car Spotter’s Guide 1940-1965’ to assist in re-identifying some of the early 50s cars in my photos.

Unlike motor manufacturers in the UK, the majority of the US motor industry introduced new body styles on an annual basis, which pins each model to a specific year. Built in obsolescence and capitalism personified.

Starting with 1950, here’s my personalised version of a decade’s worth of American autos, as captured on 35mm film during our travels across the USA. I’ve got gaps in 1951 and 1954 but by way of compensation, I’ve double and tripled up on later years…

From my viewpoint in the back of the van I spotted a Pontiac Chieftain on a garage forecourt while we were driving through Los Angeles. I didn’t realise another car got in the way until I got the film developed.

My favourite period. The styling was becoming more adventurous, taking inspiration from both the space age and the jet age. I was hoping to see the star of one of my favourite road movies, Two-Lane Blacktop. The car, a stripped out, hot-rodded, grey primered 1955 Chevrolet, is one of the stars. Denis Wilson (Beach Boys’ drummer) and James Taylor make their only movie appearance. A classic.

Unfortunately I didn’t get to photograph a 1955 Chevrolet during our three tours of the US in 1979-80, but I’ll sneak in a couple of superb examples I found at the first annual El Segundo Main Street Car Show in 1998. I was on my second camera by then – a Canon EOS 300N, so the two shots below aren’t Olympus Trip images but still shot on 35mm film.

Although I didn’t see any ’55 Bel Airs in 79/80, I did find a couple of other cool cars from that year – a DeSoto Fireflite and a Mercury Monterey.

Another great year for Chevrolet. I found a couple of ’56 Chevys. The top of the range Bel Air has distinctive long, sweeping chrome side trim and two-tone paintwork, while the entry level models have the same body but are single colour with simplified chrome trim. The Bel Air below was parked outside Lawrence Airport’s Cessna Pilot Centre in Kansas. Mildly customised, with Moon Disc wheel trims and louvred hood.

While walking the streets of LA, I came across one of Ford’s offerings for 1956: a Fairlane Fordor Victoria.

The last of my set for 1956 could have literally been the last… if the guy who appeared when I was taking the photo below carried out his threat. I went walkabout the morning after we’d played the Opera House in Lawrence, Kansas. Down a side street I spied one of my favourite fifties’ American cars, an Oldsmobile Super 88, parked next to a trailer. While I was checking it out, a man appeared in a nearby doorway. He shouted: “If you’re threatnin’ to sue me, I’m gonna shoot ya!”.

I told him I loved ’56 Oldsmobiles, I was from England and I’d never seen a Super 88 in the flesh before. he calmed down a little. I mustn’t have thought he was going to shoot me because I’ve got more photos of this particular car than any other on the tour.

Yet another great year for Chevrolet. The 1957 Bel Air is an absolute classic. For years I idly dreamed of owning one. The first one I saw was from the back seat of the van as we were heading out of San Francisco. We were running late, so my pleas to pull over were ignored.

A couple of days later I saw this blue ’57 Bel Air cruising down Hollywood Boulevard.

As with Chevrolet’s less expensive ‘150’ option in 1956, they did a similar thing in 1957. The ‘210’ was the stripped down entry-level version of the Bel Air: single colour paint and basic chrome trim. Otherwise, the body was identical.

Los Angeles was a good hunting ground for classic ’57 cars. While walking down Lincoln Boulevard, a white Ford Thunderbird cruised by. Reminded me of the scene in American Grafitti, where Richard Dreyfuss sees the woman of his dreams pull up alongside the car he’s riding in.

Coincidentally, the 1957 white Ford Thunderbird I snapped as it cruised past Allen’s Aquarium and Pet Center was also being driven by a beautiful blonde woman.

In 1959 twin headlights were all the rage…

… and tail fins were getting bigger…

For the ultimate example of tail fin excess, look no further than the 1959 Cadillac. By now the cars had not only got longer, lower and wider, but the ’59 Caddy took things to a whole new level. I didn’t find one to photograph during our 79/80 tours, but there was an amazing example in one of the books I brought home with me. ‘Grease Machines’ featured Larry Watson’s custom painted ’59.

The only 1959 car I managed to photograph was this Dodge Custom Royal, which I found dumped by the railway tracks in Washington DC. Twin headlights were still in fashion…

… but Dodge’s tail fins were positively tame in comparison to that year’s Cadillac.