A Phone Call from the Outer Hebrides 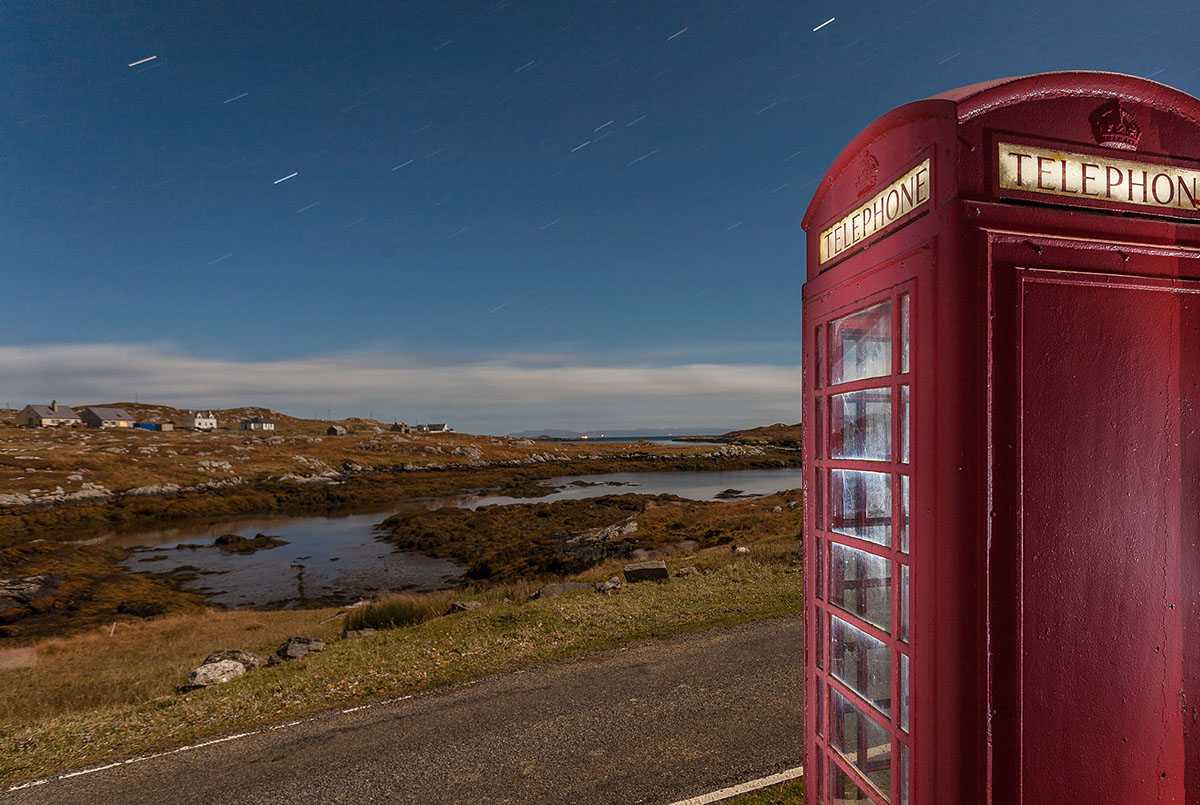 Outer Hebrides’ K6 telephone boxes, in all their magical and modified glory.

One of my first ever night photography subjects was the classic red telephone box above. It stands beside a former Post Office, overlooking Loch Finsbay on the east coast of the Isle of Harris. I later discovered many of the local residents referred to it as the ‘magic phone box’.

In the mid 1990s, the phone next to Finsbay Post Office developed a fault. It didn’t prevent you making a call – quite the opposite – for 10p you could dial anyone, anywhere in the world, for as long as you liked. Your money never ran out! It didn’t take long for word to spread, and for the best part of a year, many a long distance phone call was made from this picturesque location.

A woman who had emigrated to Trinidad and Tobago was visiting her brother on the Isle of Harris. During her stay, she developed an obsession with Radio 4’s long-running, self-styled antidote to panel games, ‘I’m Sorry I Haven’t A Clue’. When it came time to return to her Caribbean home, she asked her brother to record the remainder of the series. This he did, but instead of posting the tapes by airmail as originally planned, he chose an alternative method of delivery. He took his portable cassette player to the magic phonebox, placed a long distance call to Trinidad and Tobago, inserted 10p when his sister answered, then sat back and admired the view for thirty minutes while his distant relative soaked up her latest fix of Humphrey Lyttelton and Co. All thanks to the (unintended) generosity of British Telecom.

A brief history of the K6 telephone box

Before my next story, I’ll share a little phone box knowledge I’ve gained as a result of taking these photos.

There were eight designs of red phone kiosk produced between 1926 and 1983. The model featured here first appeared in 1936. It’s official name is ‘Kiosk Number 6’, more commonly known as the ‘K6’. It’s by far the most popular British phone box ever made. 60,000 K6 kiosks had been manufactured by the time production ceased in 1968. Approximately 11,000 K6s still survive, with fewer than 2,500 still in service. Here’s one of them…

Christmas 2010: Scarista Post Office opened for a few hours each week, mostly for older folk to call in and collect their weekly pension. In common with most island post offices, there was a K6 phone box nearby. You can’t see it in the photo above but I noticed Scarista’s phone box didn’t have the usual one piece door: instead it was fitted with two narrow doors. The top half of each door had a single pane of glass, while the bottom half was a solid steel panel.

I didn’t give it much thought until I stopped by Scarista Post Office a few years later, this time making sure to get a shot of the K6’s double doors, although they’d deteriorated since my last visit, the lower steel panels having almost completely rotted away. I posted my photo on our local Facebook page, mentioning the unusual double doors. This led to an interesting discussion.

Someone who used to live in the house next door to Scarista post office recalled her father placing a large rock against the K6’s original single door whenever a strong gale was forecast – otherwise the violent clanging, banging and slamming of the door would keep the family awake at night.

Another contribution came from a retired BT engineer who used to make periodic visits to service and repair the islands’ phone boxes. The Outer Hebrides was the only place he’d seen the K6 double door modification, Scarista’s K6 being one of them. He suggested the doors were made specifically to cope with the extreme winds experienced here. This made sense – I remember passing a few K6 phone boxes on the island where the doors were either missing or lying on the ground nearby. Turns out they’d literally been blown off their hinges by the wind!

Our retired BT engineer remembered one other K6 double-door conversion. It’s located in Crulivig on the Isle of Lewis, about a mile before the bridge to Great Bernera.

And as I discovered earlier this year (February 2019), it’s still there, complete with double doors.

The rotting doors of Scarista’s K6 phone box have since been replaced with a standard issue single piece door. Does this mean the K6 at Crulivig is the only phone box in the UK featuring the extremely rare ‘limited edition’ double-door conversion?

At this point a museum archivist chipped in. Intrigued, he offered to contact the world’s foremost authority on K6 phone boxes, who is also the author of a recently published book on the subject. The story was also passed on to a senior curator at the National Science Museum, as well as a Professor of Telecoms at the University of Salford and the people who run the National Phonebox Collection.

We waited with baited breath for their response. Within a few days it came. Not one of the experts had ever seen or heard of the Hebridean K6 double-door conversion before.

This article first appeared on Caught By The River