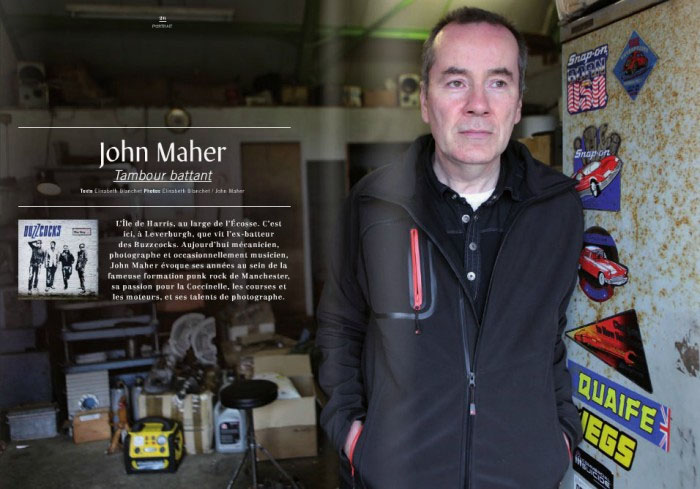 Photographer Elisabeth Blanchet called in for a chat and a few photos this summer. The results have just been published  in the latest issue of LM – a magazine distributed throughout Belgium and northern France. Unfortunately my command of the French language doesn’t extend to providing an accurate translation. I scraped an ‘O’ level pass in French a couple of weeks after my sixteenth birthday, just before I joined a punk rock band called Buzzcocks. I tried pasting the text of the interview into Google Translate but the results aren’t worth sharing. Reminds me of my last experiment with Google’s online translator: in this Dutch article, the word ‘Buzzcocks’ is magically transformed into ‘Zoomdicks’!

If your grasp of the French language is better than mine, checkout the full issue of LM Magazine Issue 101 for free. Here’s the article as it appears in the mag…

Click here to read the full article on the LM blog, complete with additional photos.

In brief, the interview covers the three main strands I might refer to as ‘my career’: drummer with Buzzcocks, my involvement with air-cooled Volkswagens (drag racing and building high performance engines) and my interest in photography since relocating to the Outer Hebrides.

Talking of photography, I’ve got to mention Elisabeth’s catalogue of work. I’d describe her style as ‘documentary’ and/or ‘photo-journalist’. Elisabeth is also a photographer with a conscience. Maybe you’ve heard of, or even seen Channel 4’s TV series ‘Big Fat Gypsy Weddings’. Elisabeth had been documenting the gypsy way of life for almost a decade. Channel 4 contacted her, asking permission to use some of her images to promote the upcoming series. She agreed. BUT when the series was broadcast and she saw the manipulative, exploitative, sensationalist approach C4 had taken, she pulled out of the project. In October 2012 the Advertising Standards Authority ruled Channel 4’s Big Fat Gypsy Weddings advertising campaign was “irresponsible, offensive and reaffirmed negative stereotypes and prejudice against Travellers and Gypsies”. Read the full story here: Big Fat Gypsy Weddings / The story behind the posters

More recently Elisabeth has been the driving force in setting up the Prefab Museum in Catford, London. She played a major part in a Kickstarter crowdfunding campaign to raise £15,000 to set up and maintain a unique living museum celebrating post-war prefab life through art and by sharing memories and archive.

The exhibition in one of the old prefabs on Catford’s soon to be demolished Excalibur estate, needed to raise £15,000 to remain open to the public until the new year. On September 23, with just hours to go until the close of the Kickstarter fundraising campaign, the museum was still well short of its target. Elisabeth, who had contacted everyone from Boris Johnson to magician Dynamo for support, explained: “We had a last minute donation from someone anonymous who pledges quite a lot of money so that saved us. Until the last minute it was really stressful.”

Thanking all the donors, Elisabeth said: “It’s great because it means we keep on going and got a bit of cash to manage our applications. Also we can stay open because we’ve got more and more people wanting to come.”

In a strange twist, reminiscent of a 1970s conspiracy thriller, the newly saved Prefab Museum was the victim off a mysterious fire:

After surviving 60 years of habitation and recent attempts by the council to demolish it, a prefab building in South London has succumbed to fire. Fortunately, the damage has been confined to the front bedroom of the prefab home, but as it is now the home of the prefab museum, the fire destroyed some equipment and art work. Also, the wall and ceiling were damaged.

Although the damage from the flames was confined to the bedroom, smoke damage has covered every surface in the other rooms.

After fighting to get the museum opened, then fund raising to keep it open in the face of persistent attempts to demolish the rest of the estate, it has been quite a blow for the organisers.

The museum is closed until further notice while they assess the cause of the fire and the cost of repairs.

2 thoughts on “Pardon My French…”