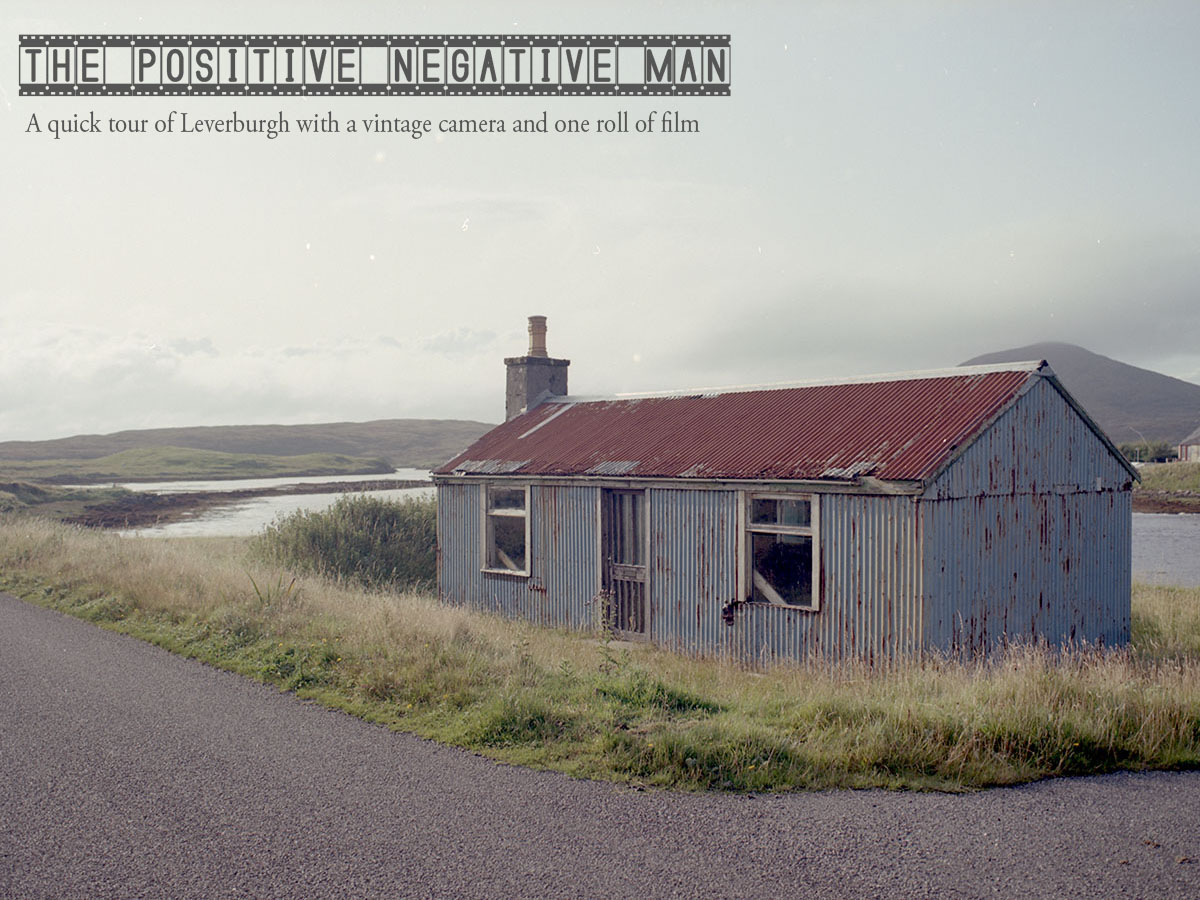 A short photo tour of Leverburgh – with a vintage camera and one roll of film.

I recently purchased a 1980’s Bronica medium format film camera. Back in the day Bronica was the affordable alternative to Hasselblad for thousands of wedding and studio photographers . The ETRS is a fully manual camera. No ‘Auto’ setting. No LCD preview. Shutter speed and aperture settings are determined by the user, not the camera.

I loaded a roll of Ektar 100 (good for 15 shots), grabbed my light meter and went walkabout in Leverburgh to waste some film. The next ten scenes are all within a mile of my workshop. 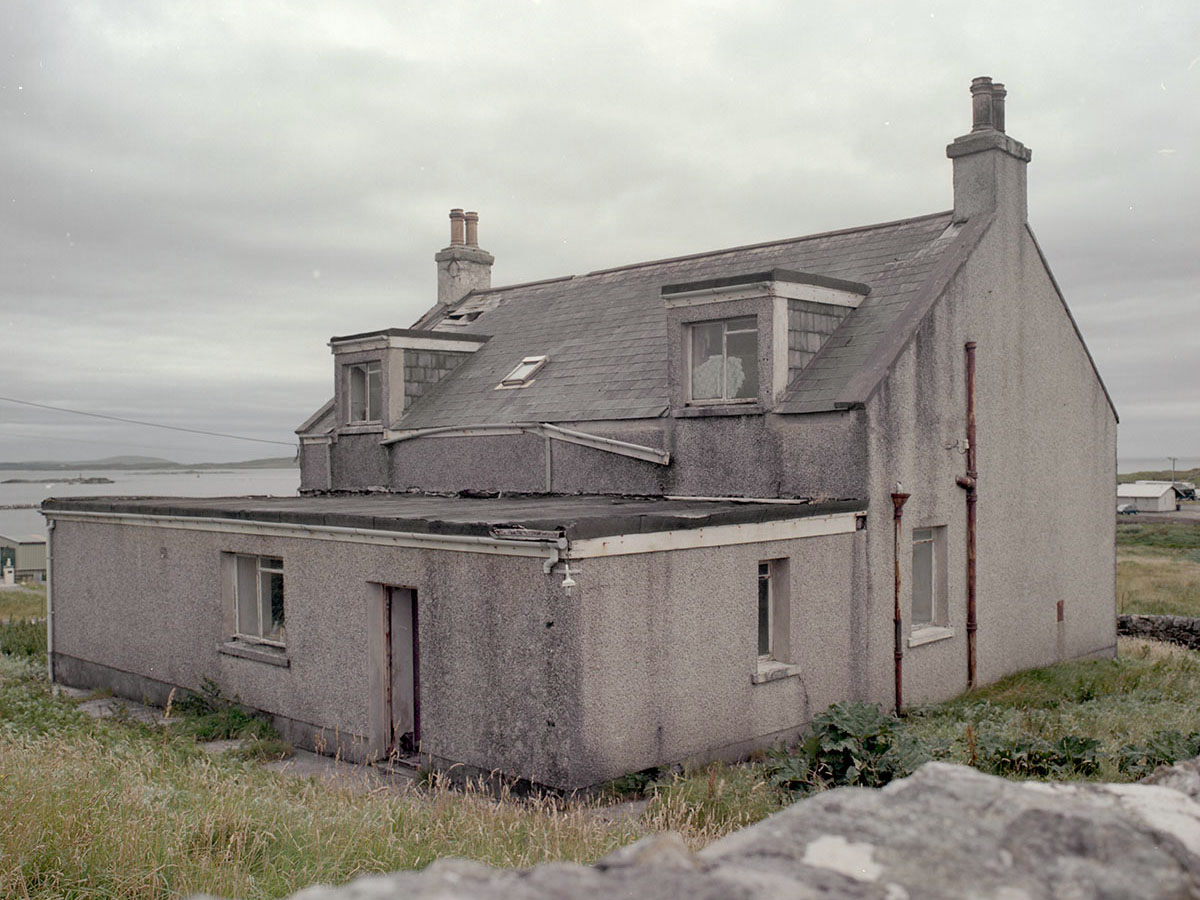 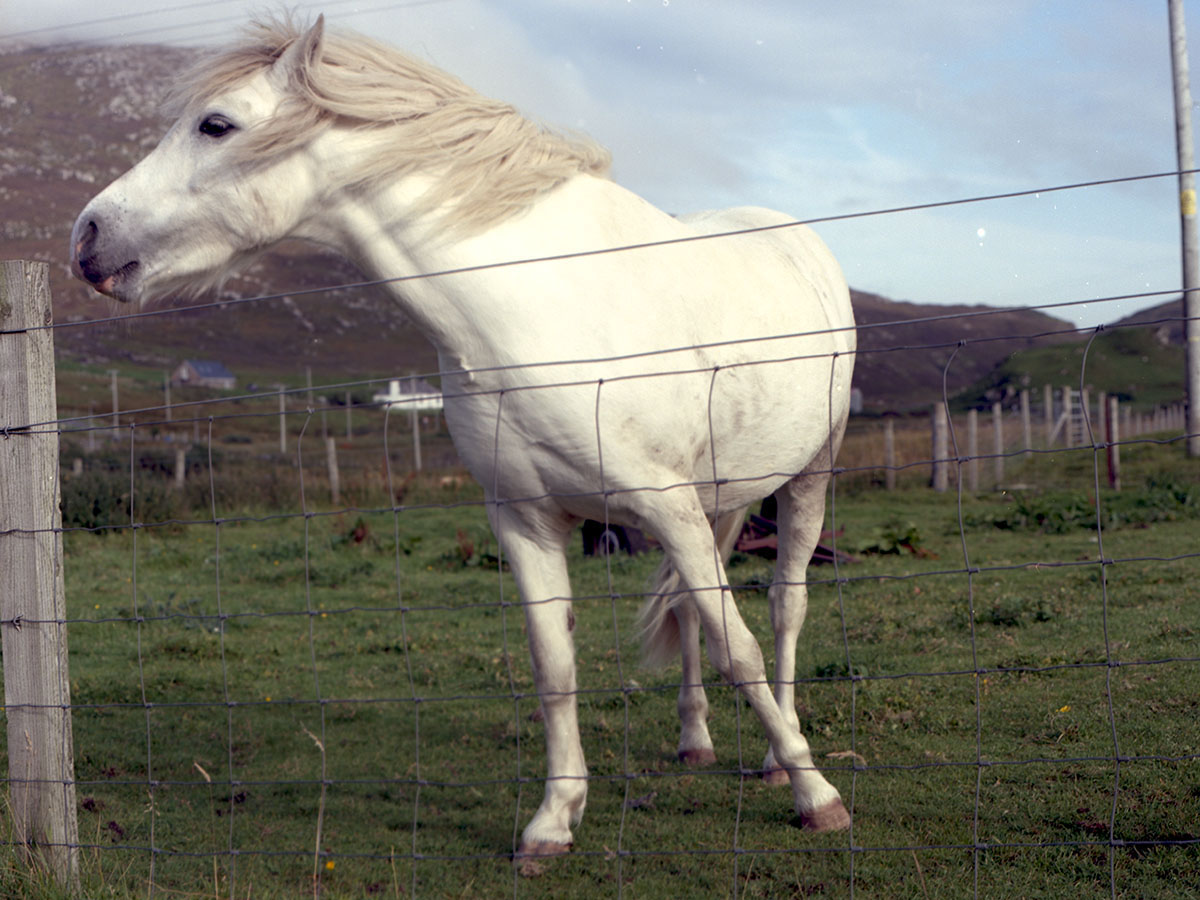 2. Charlie lives next door to the doctor’s surgery. He’s an MBE (the doctor, not the horse). 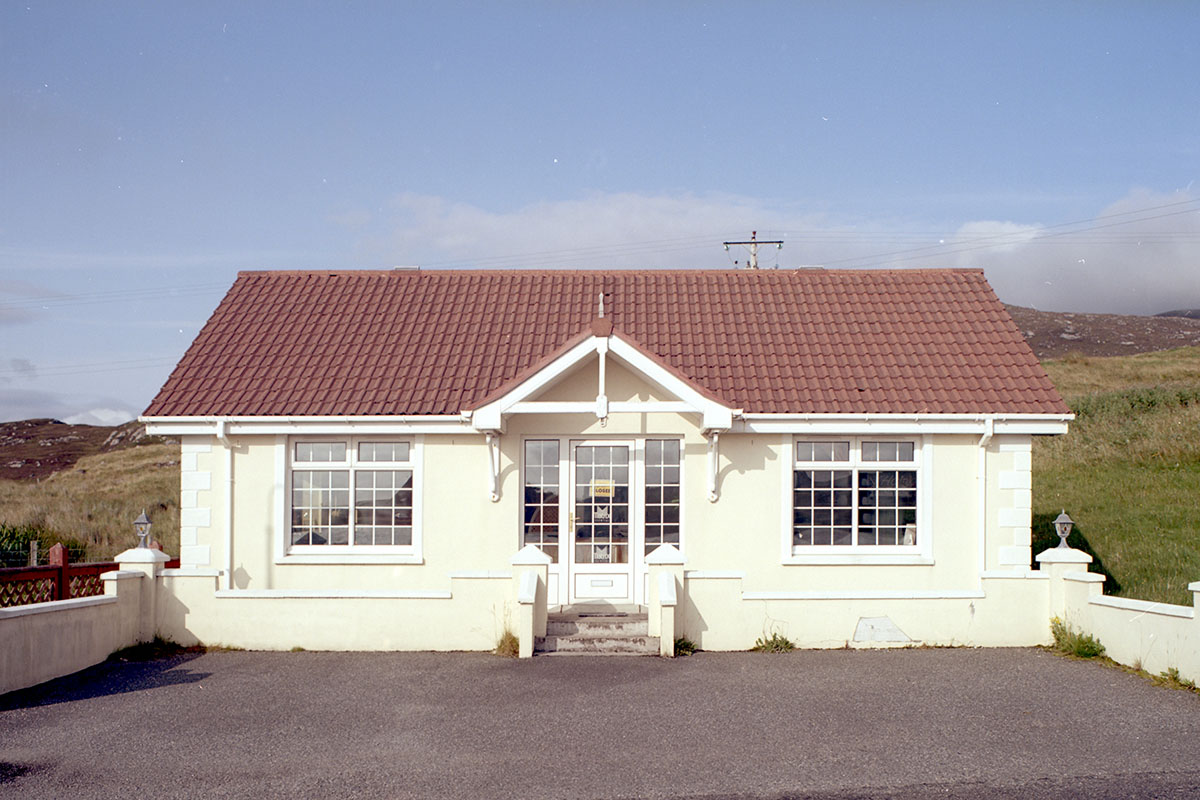 3. Silhouette: Leverburgh Hair Salon. £8 for a dry cut. Lasts me about 2 months. 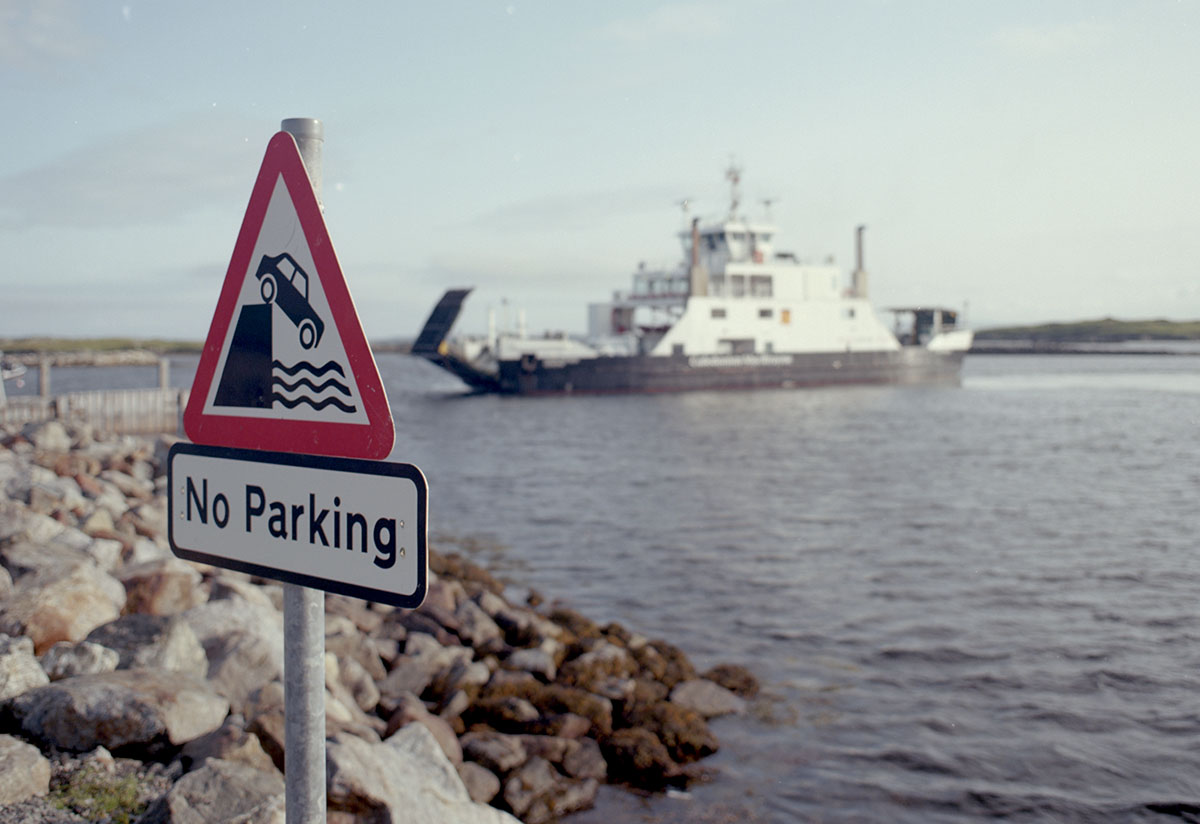 4. Car ferry MV Loch Portain sails daily between Leverburgh and Berneray. 4 times a day in the summer, twice a day in the winter. 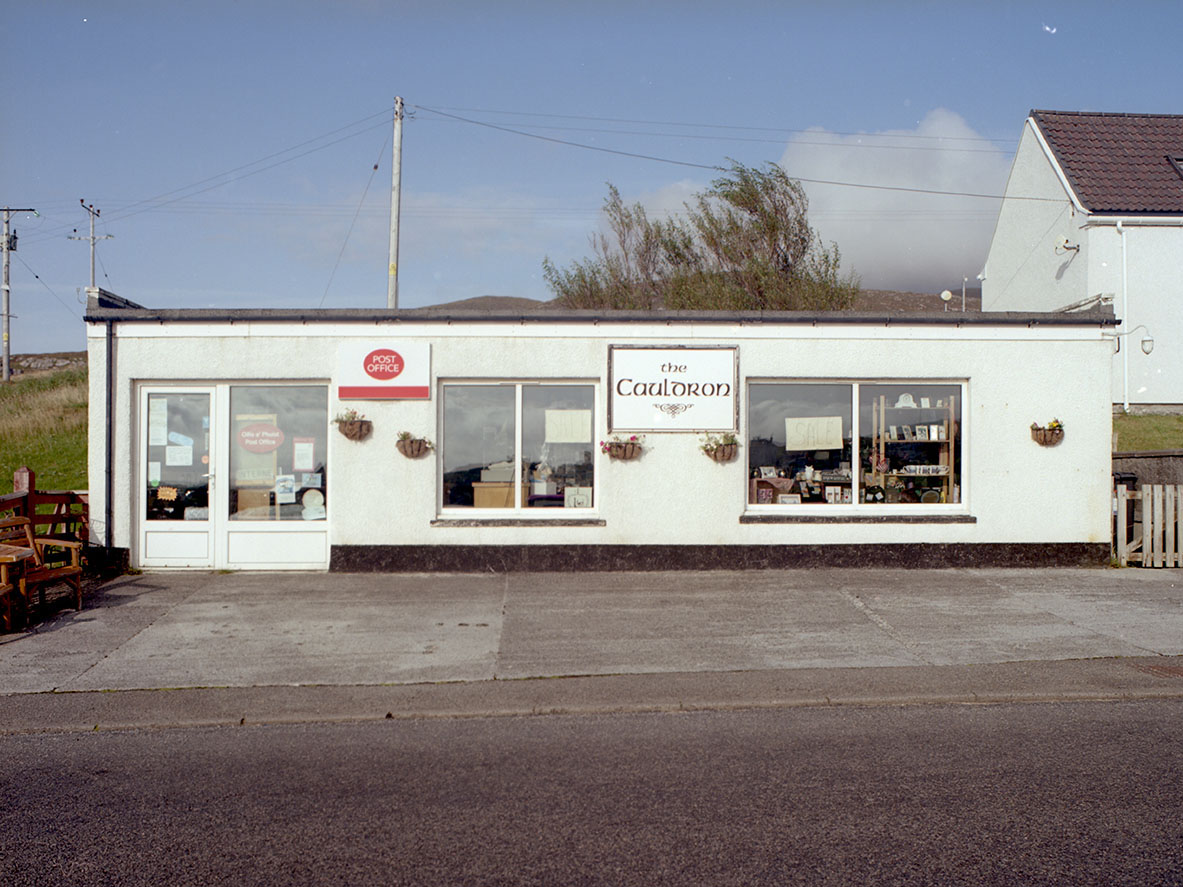 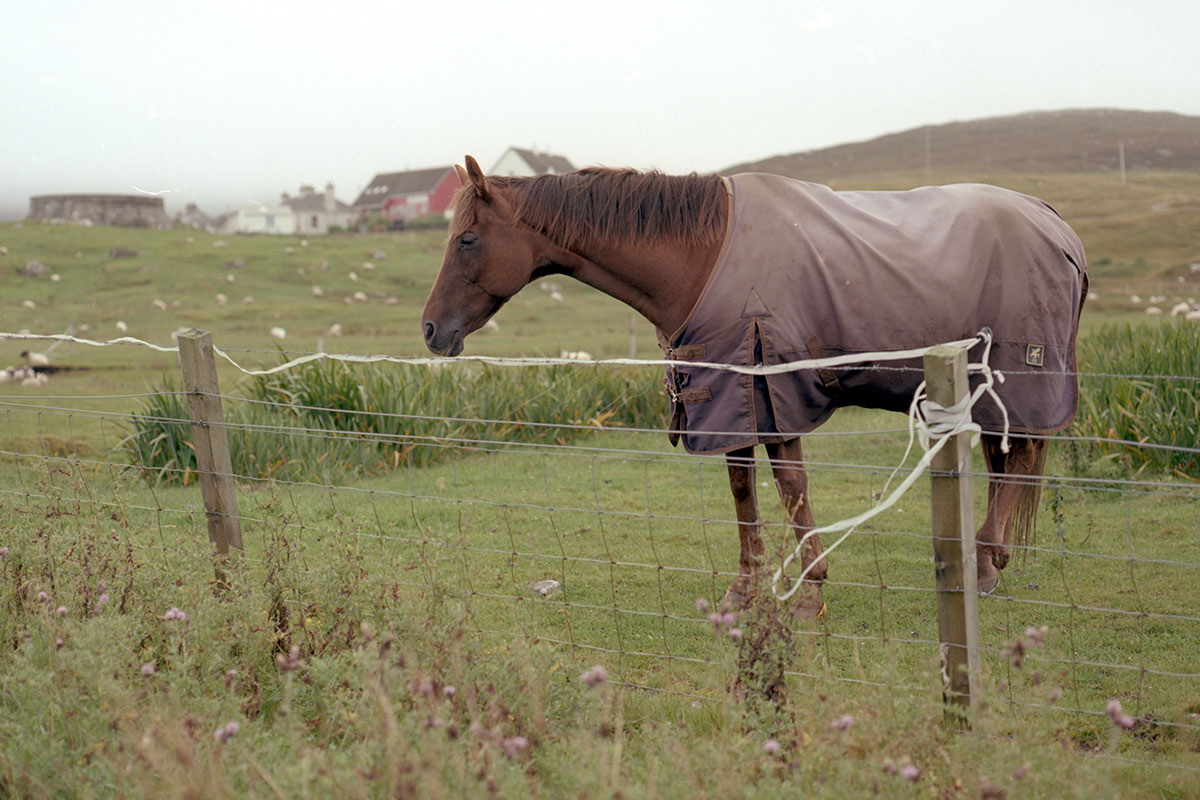 6. Mackenzie hangs out in the field behind my workshop. He predicts the weather on behalf of the Butty Bus 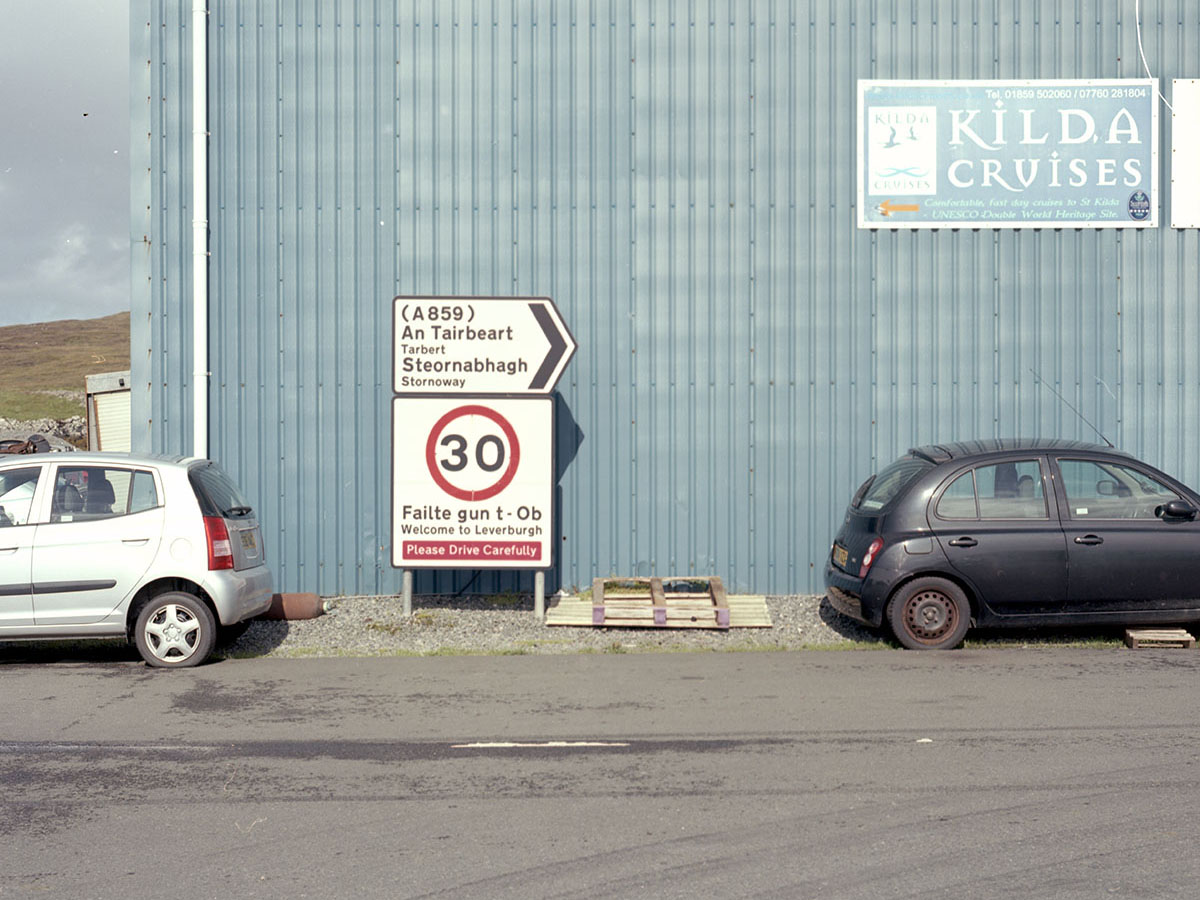 7. Welcome to Leverburgh. Shonny and Wilbur in the big blue shed do car repairs. They also stock animal feed, potatoes and peat. Multi-taskers. 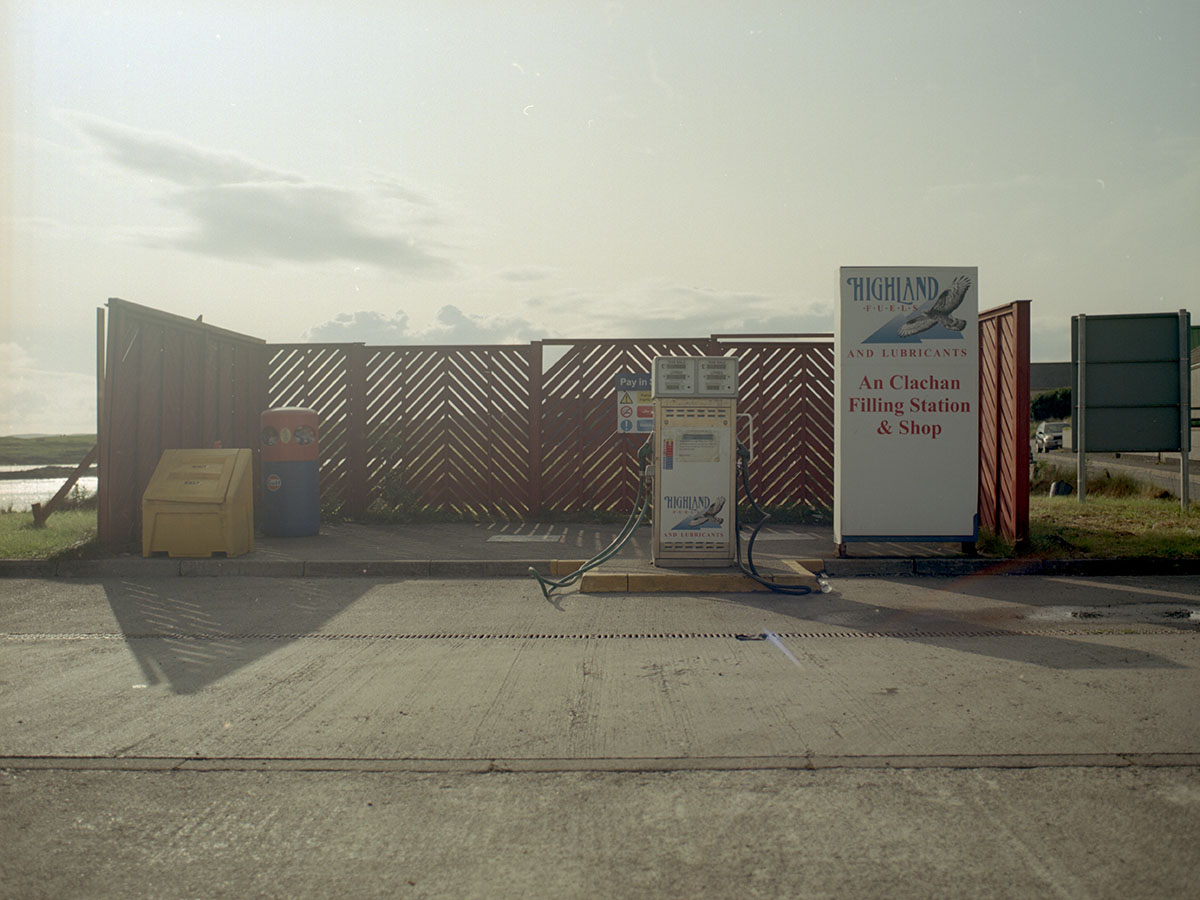 8. An Clachan – the local community shop. General stores and filling station. We’d be lost without it. 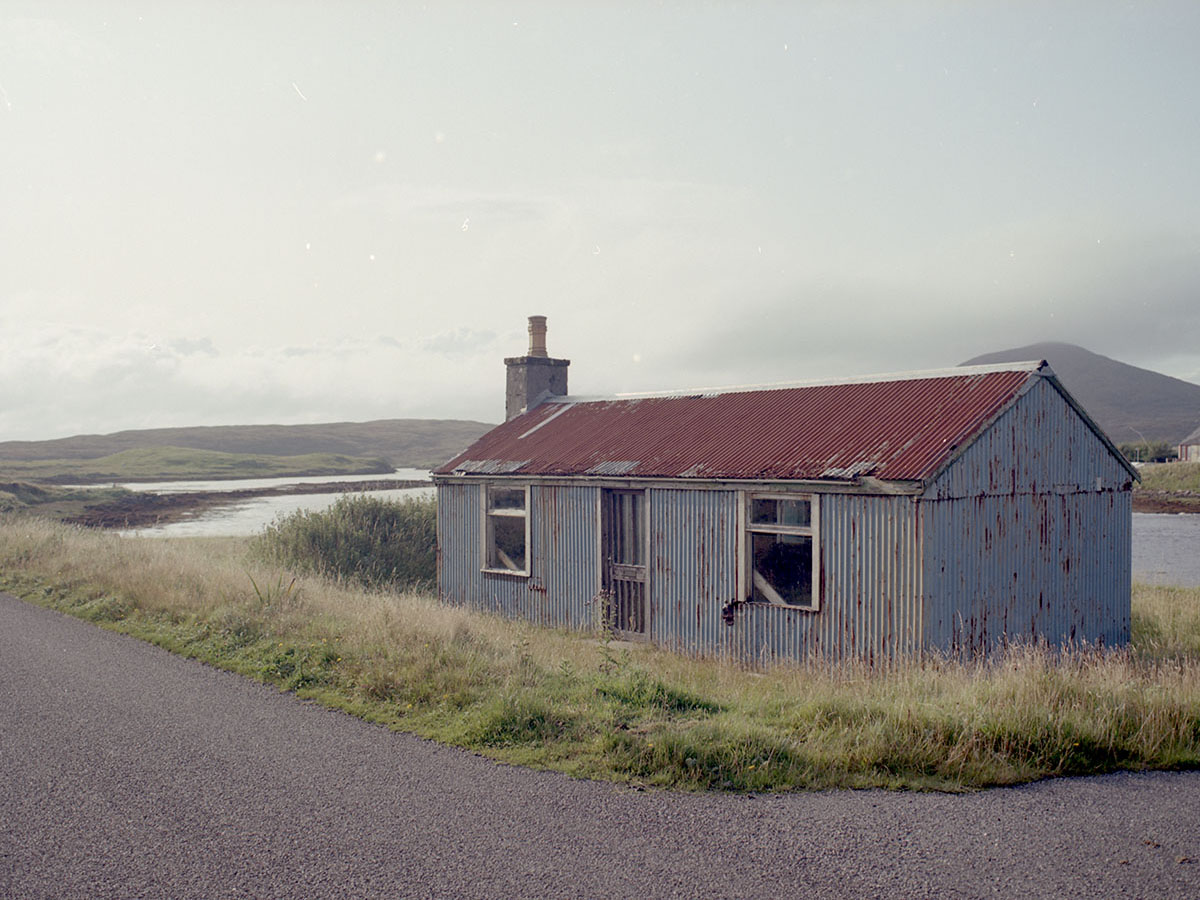 One of the things I like about these older, non-automated cameras, is the modular nature of their construction. With that comes a better understanding of what takes place when you click the shutter. Here’s my Bronica broken down into its constituent parts. You’ve got to admire the engineering skill and design that went into these non-digital cameras – everything still functions perfectly, decades after it left the factory. 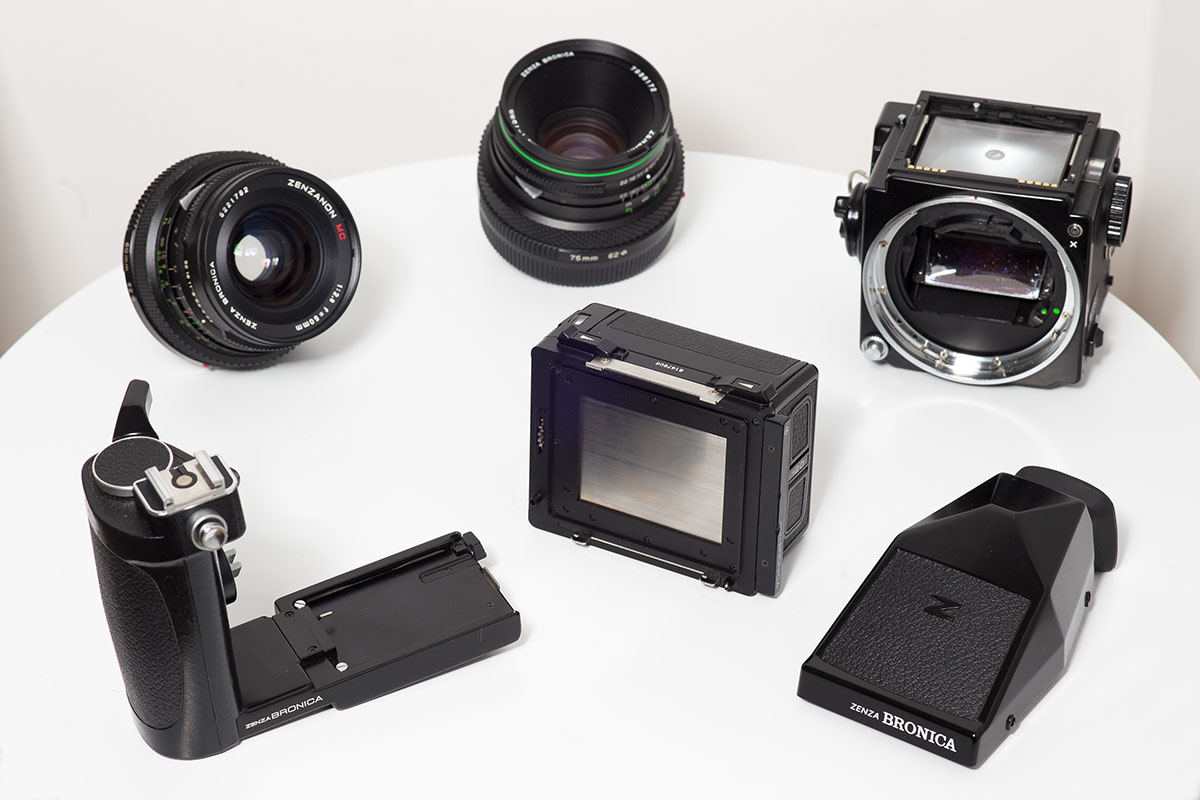 One of the attractions about this particular eBay listing was the inclusion of the accesory Speed Grip. Not only does it make the camera easier to use for handheld shots, it includes a film winder and hot shoe flash mount. The hot shoe feature is especially useful. I can mount a wireless flash transmitter and synchronise off-camera strobes at shutter speeds up to the lenses’ max shutter speed (1/500th sec). That’s impressive, considering my relatively new DSLR has a max sync speed of 1/160th sec. 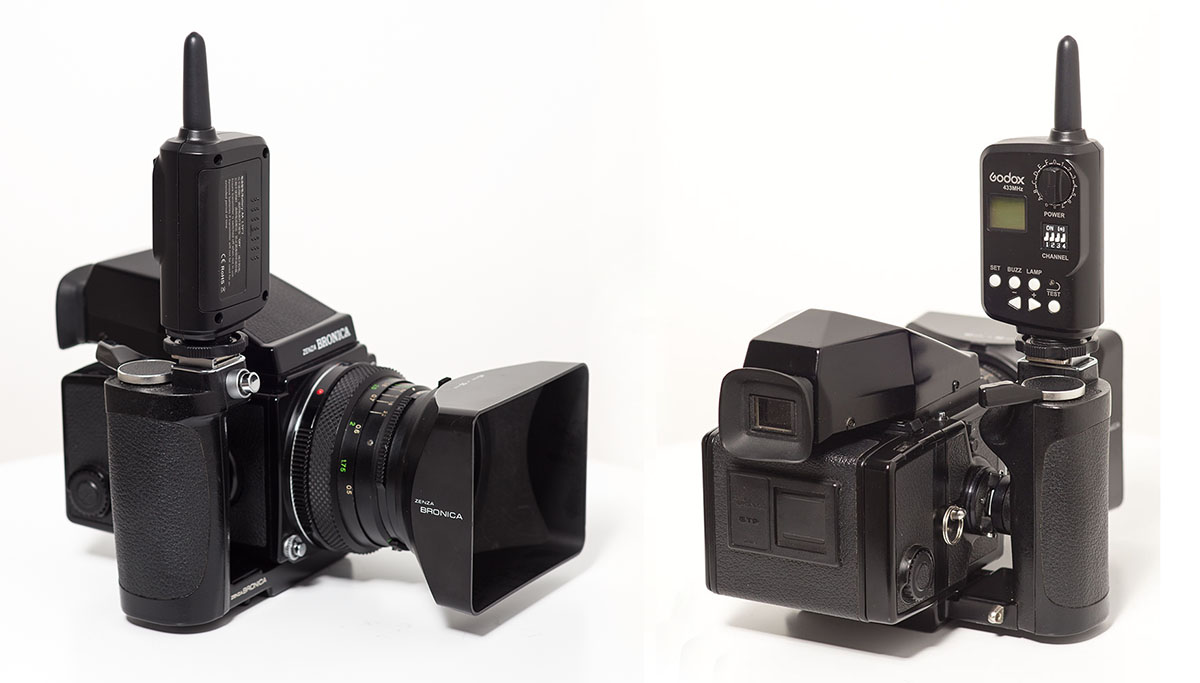 To test the hot shoe/wireless transmitter combo, I set up the shot below. Shutter speed was dialed in at the fastest available (1/500). I underexposed the overall scene by 1 stop (f/8) to capture some detail in the sky. I mounted a 600w strobe on a stand just out of shot, left of camera. Using my Sekonic flash meter I adjusted flash power to deliver f/8 on the ‘For Sale’ sign. Pop! 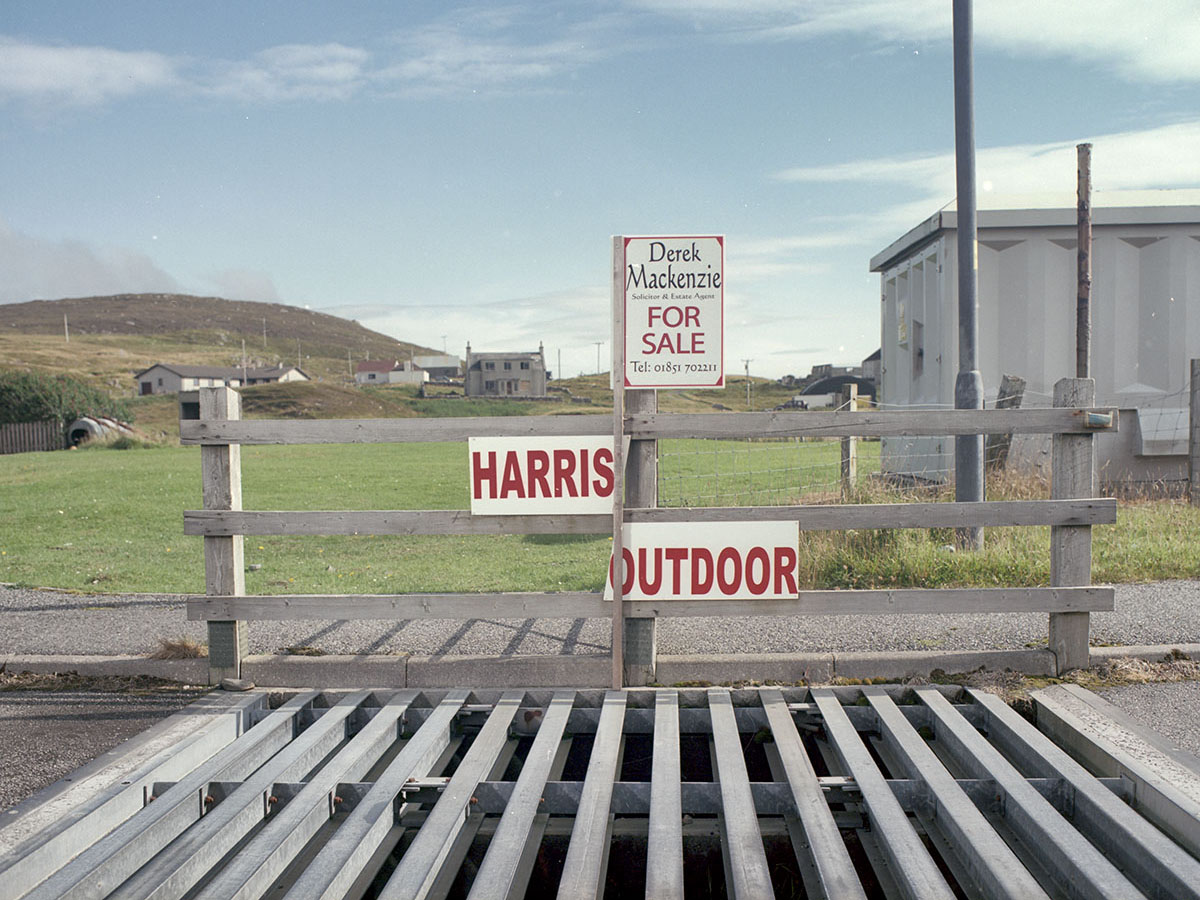 Having rattled off a bunch of shots around Leverburgh, I had two left. On the way home I snapped the bus stop in Finsbay and caught a telegraph pole’s reflection in a small lochan between Quidinish and Flodabay… 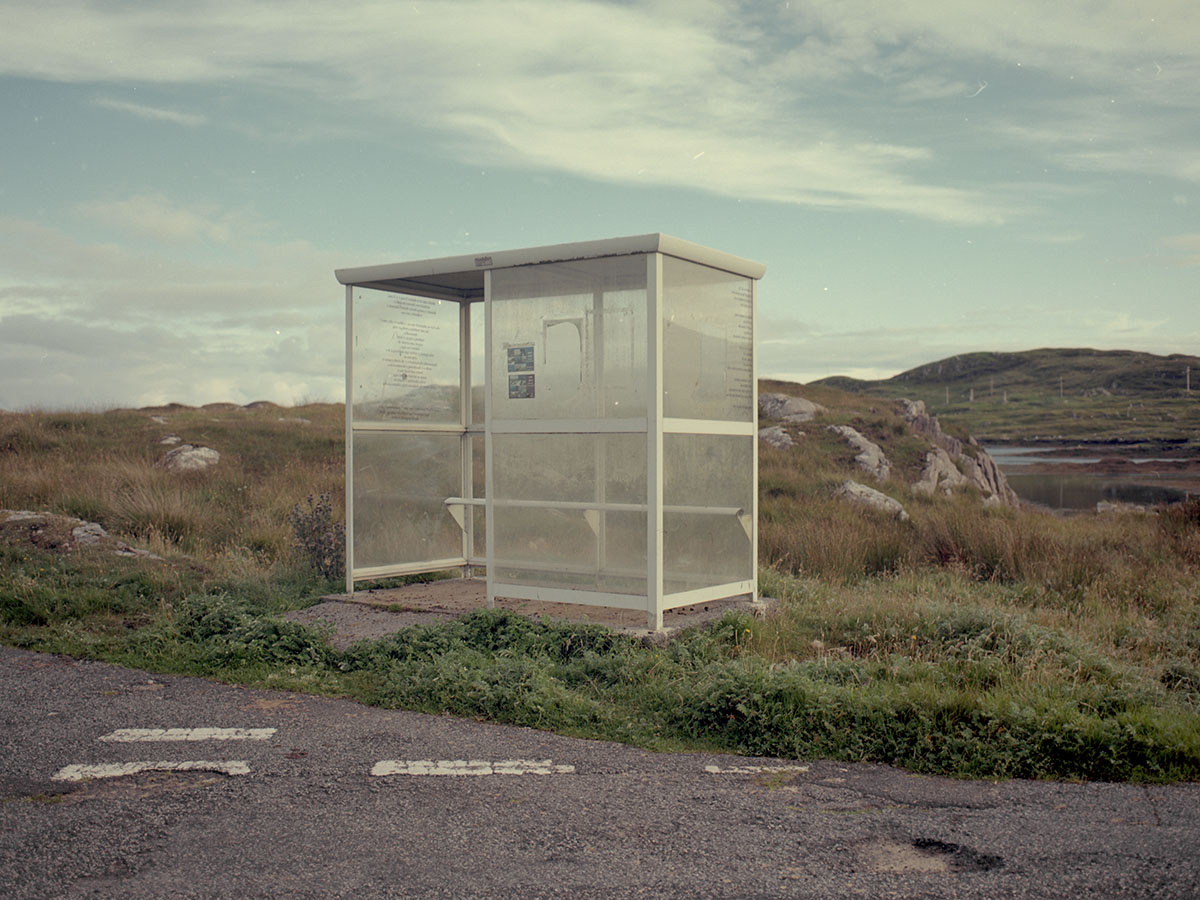 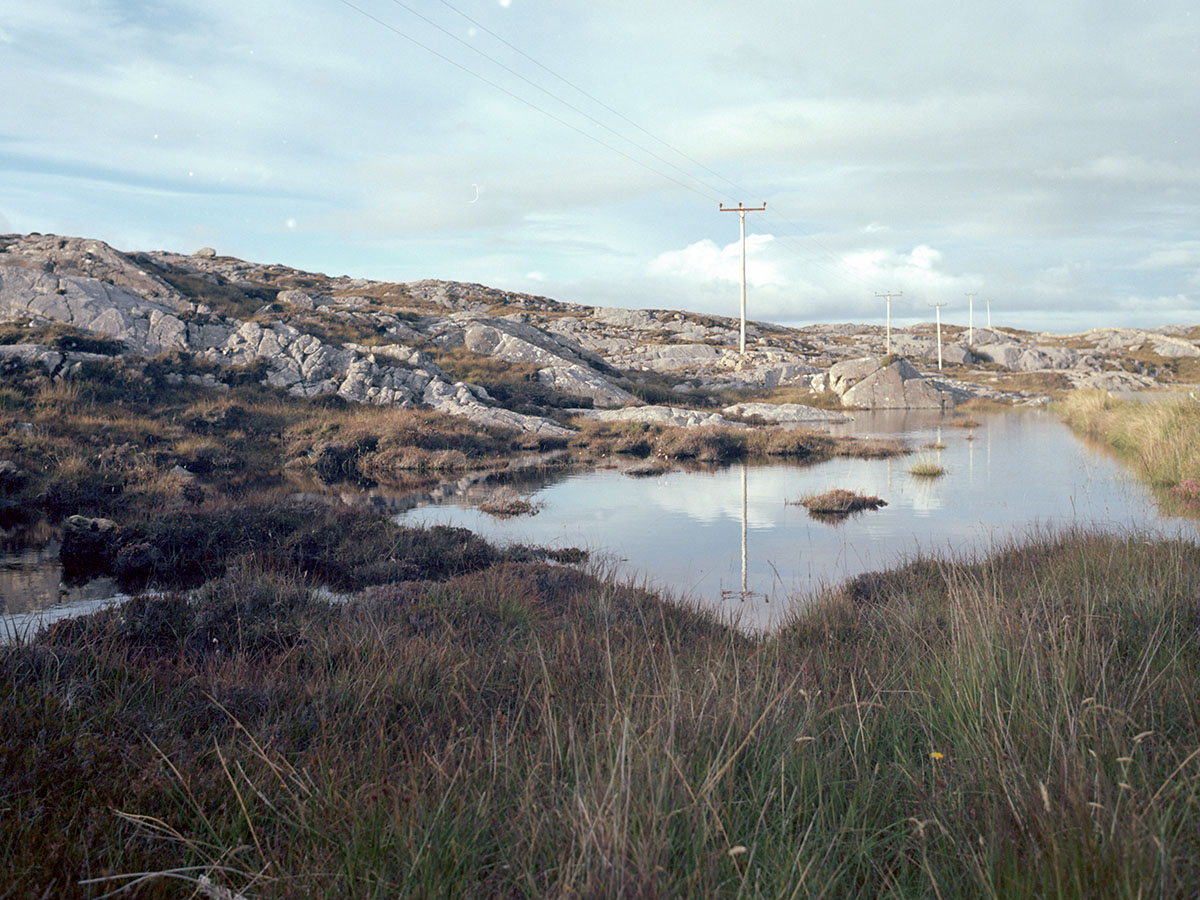 The images are nowhere near as sharp as those taken with my DSLR, although that could be a scanner issue, plus the fact most of the photos above were shot handheld rather than on a tripod. Further experimentation required. I noticed a similar lack of sharpness when proof scanning my Leaving Home/Nobody’s Home 5″ x 4″ negatives on the Epson V700, but when the same negatives were drum scanned by Tim Parkin, the results were tack sharp. However, the slightly softer appearance of this little collection looks OK in my opinion. Pixel peeping and obsessing over image sharpness often misses the point i.e. is the picture worth looking at? Plenty of digital shooters go to great lengths to emulate the look and feel of film. They should try shooting film. I am a Positive Negative Man.

PS. The title for this post was inspired by an episode of The Avengers.
Short clip: