Introducing Chris – proprietor of the Butty Bus – a fast food establishment parked at Leverburgh Pier. Chris modestly describes it as ‘a greasy spoon on wheels’ and ‘the only cafe on the island with four Michelin tyres’.

Chris comes from a long line of Harris folk. His family connections with the place go back generations. Born in Inverness, he moved to Harris for a brief period when he was 16, leaving shortly after to spend a decade working at sea in the Merchant Navy. Then after many years running a successful wholesale fish business in Inverness, he returned to the family home in Harris at the turn of the millennium. In 2010 he acquired the Butty Bus, a former on-location film and TV catering unit, and parked it on Leverburgh Pier. The Butty Bus has since become one of the most popular value-for-money eateries on the island. While most cafes and restaurants on Harris go into hibernation during the winter months, the Butty Bus remains open all year round.

I took the pic below in 2013. You can see the Leverburgh to Berneray ferry on the left side of the picture. Chris opens each morning (excluding Sundays) in time for passengers to grab a bacon butty and cup of tea before boarding the first ferry. 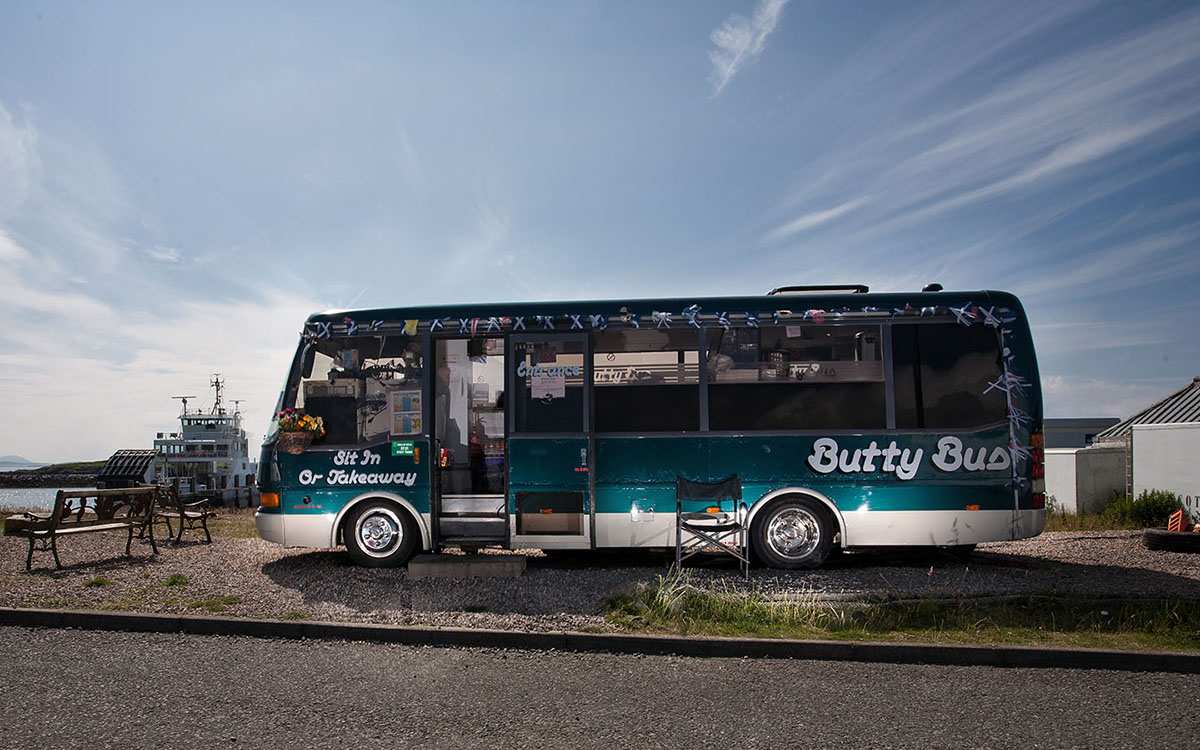 As Seen on TV

If you’re a fan of BBC’s The One Show, you may have seen Chris and the Butty Bus make an appearance on one of the two programmes they broadcast from the Outer Hebrides on July 19th and 20th. If you’re reading this prior to Aug 17th 2018, the episode featuring Chris is available via the BBC iplayer: The One Show 20/07/18

The One Show clip also shows Chris wearing one of his other hats – working as Lifeboat Operations Manager for Leverburgh RNLI Lifeboat. It’s a shore based role that comes with numerous responsibilities, including authorising launch of the lifeboat. Chris also provides navigational training for the crew when required. All of the work Chris and the crew carry out for the RNLI is done on a voluntary basis. You can see the lifeboat on its mooring in the picture at the top of the page.

Celebrities in the Hebrides 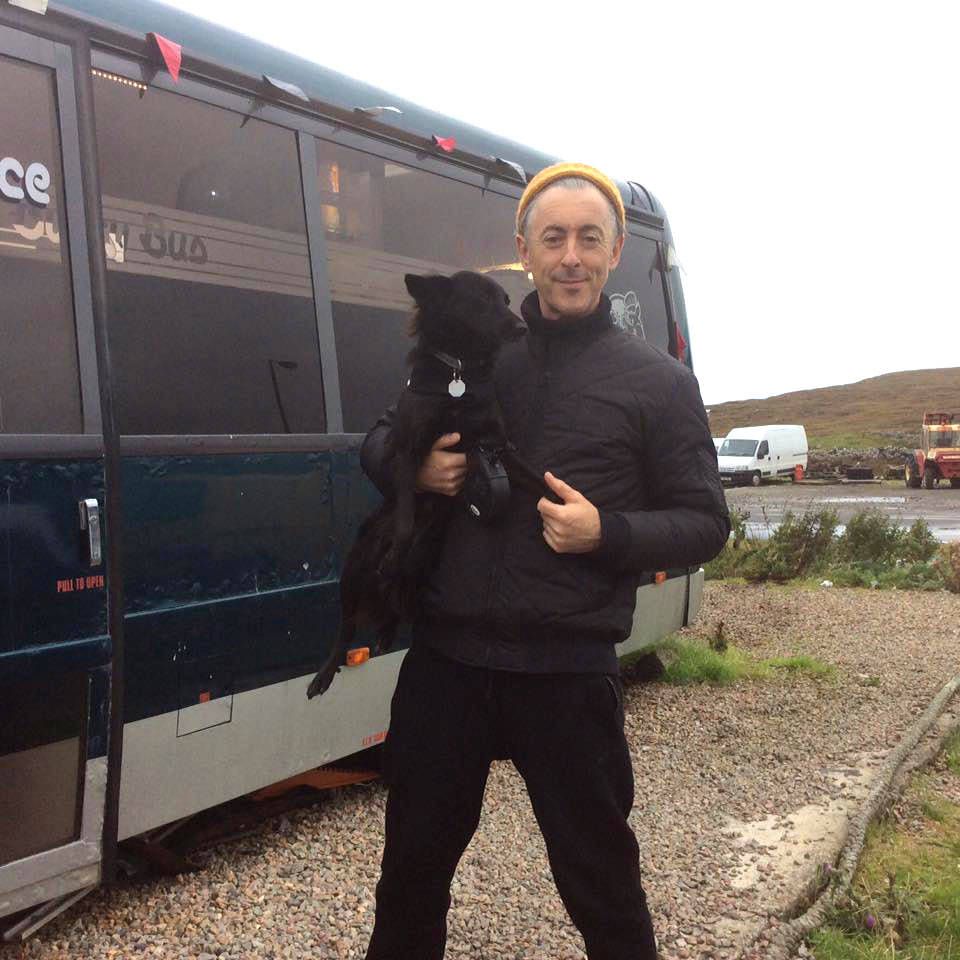 Princess Anne called into Leverburgh while sailing around Scotland with her husband. He’s a top bod in the RNLI, so he and Chris got on like a house on fire. A few minutes after they departed, Chris realised the Princess and Mr Princess had left without paying for their bowls of soup. Fortunately one of  her minders appeared with the readies before he put out a shout for the debt recovery crew. An honest mistake.

I was on the bus one lunchtime when Will Self clambered aboard. He was about to head out to St Kilda with his buddy Anthony Gormley. A few weeks later, he related his Butty Bus experience in a column celebrating roadside eateries in the New Statesman.

But when it comes to celebrity status, Columbus the cat knocks all members of the royal family, Hollywood actors, verbose authors and people who like to make cooking sound complicated completely out of the park. Columbus made the headlines in 2016 when he attempted to escape from Leverburgh by stowing away in a kitchen cupboard aboard a visiting yacht. When the boat arrived in Oban, he was captured before he could make good his escape.

Columbus, the ‘Steve McQueen of the cat world makes it into the pages of The Herald

The BBC provided more detail. Click the pic below for the full story… 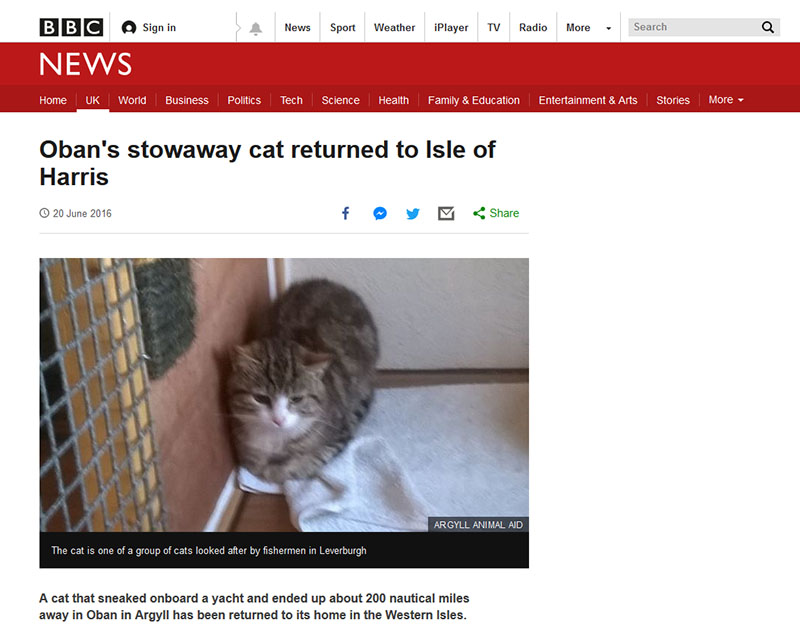 Various do-gooders launched a social media campaign in a bid to return Columbus to the place he so desperately wanted to escape, but not before having his knackers and the tip of his left ear removed. The neutering process is standard procedure when rescuing stray cats and the ear tip thing is carried out to make identification of neutered cats an easier process.

Inspired by the plight of Columbus and his crew of feral cats, I made what will probably rank as my only ever attempt at wildlife photography. I set up my camera near the Butty Bus, scattered some food on the ground and retired to a safe distance with a remote shutter release. I was hoping the whole crew would show up but most were wary of the camera. No problem for Columbus though… he’s the one on the right. 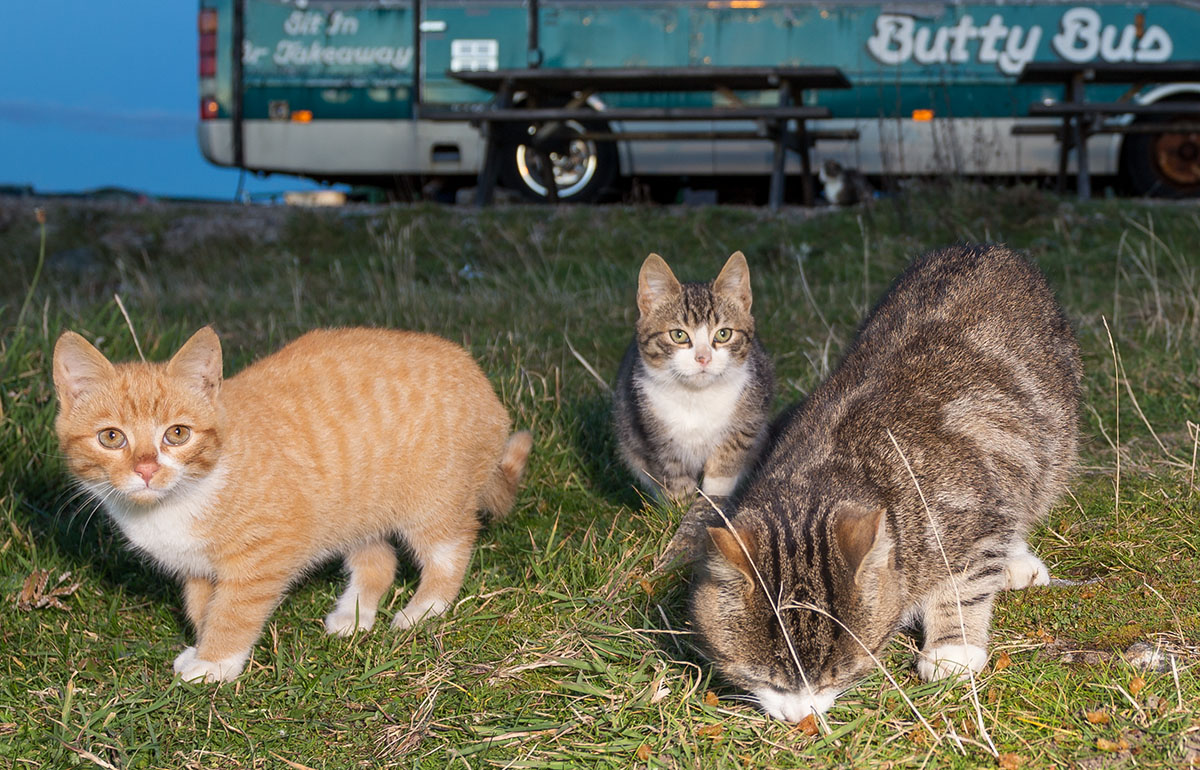 Columbus and his clipped left ear, with a couple of young trainees

One year after Columbus attempted to escape to Oban, he made another unsuccesful bid for freedom. Story courtesy of Isles FM:

Columbus the celebrity cat from the Leverburgh Pier feral colony has been on his travels once again, this time on a fishing trip to the Monach Isles. Columbus hit headlines last summer when he stowed away at Leverburgh on a visiting yacht and was put ashore at Oban, needing combined efforts from Argyll Animal Aid and island visitors to repatriate him to his Isle of Harris home. This time he joined the fishing vessel Valhalla and spent a few days with them off the shore of North Uist and the Monach Islands, returning with the crew when they landed back at Harris. He’s been described by locals as ‘the Steve McQueen of the feline world’ and is an important part of the Leverburgh fishing community – keeping rats and mice down around the pier area – but he obviously also has a taste for fresh fish.

A couple of weeks later, Columbus was plotting yet another escape… 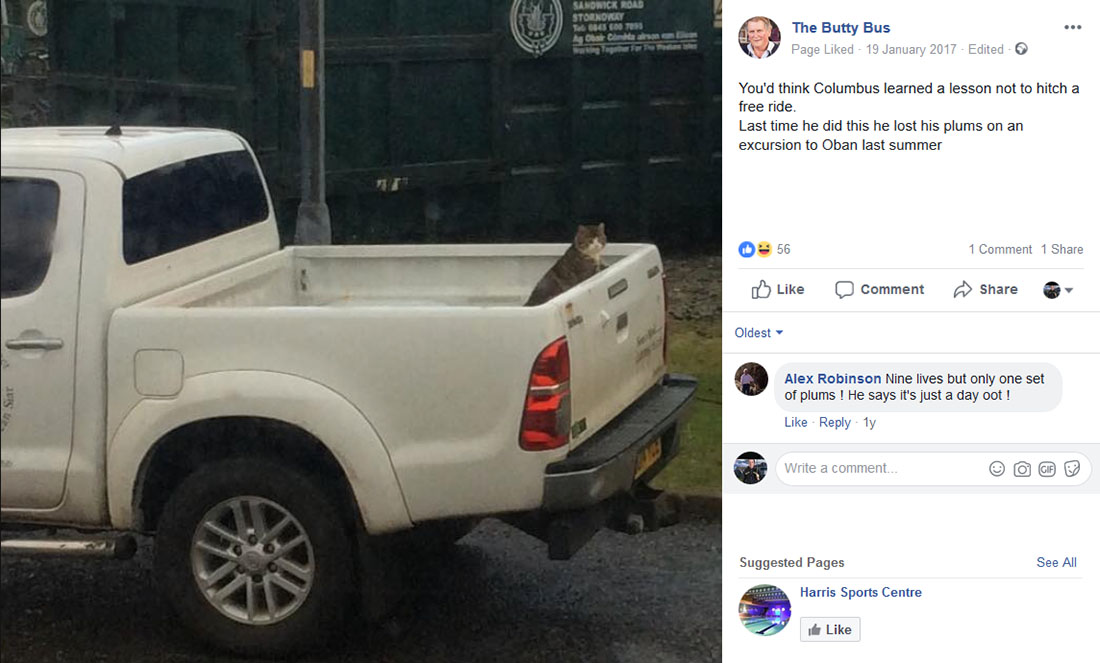 McKenzie and friends – talking about the weather

McKenzie is a thoroughbred horse and Butty Bus accomplice. He lives in the field at the back of my workshop. He channels his amazing weather predicting abilities via the Butty Bus facebook page, frequently assisted by his pals Columbus and Shonnie the Pug. Here are a couple of examples of McKenzie and his chums in action: 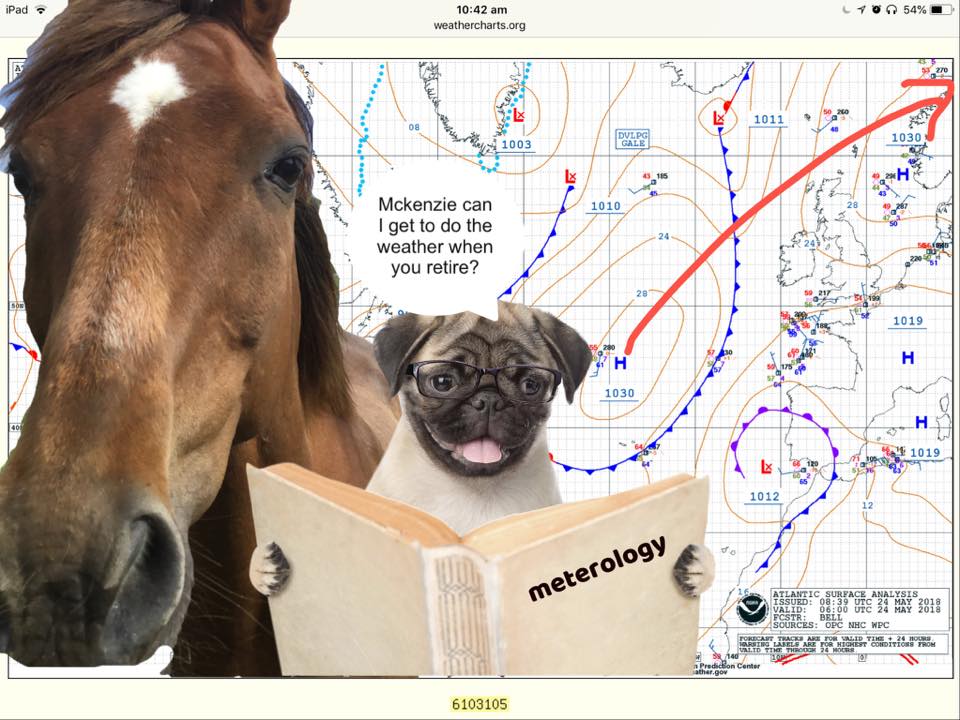 Meanwhile, Columbus isn’t overjoyed with another animal stealing the limelight in Leverburgh… 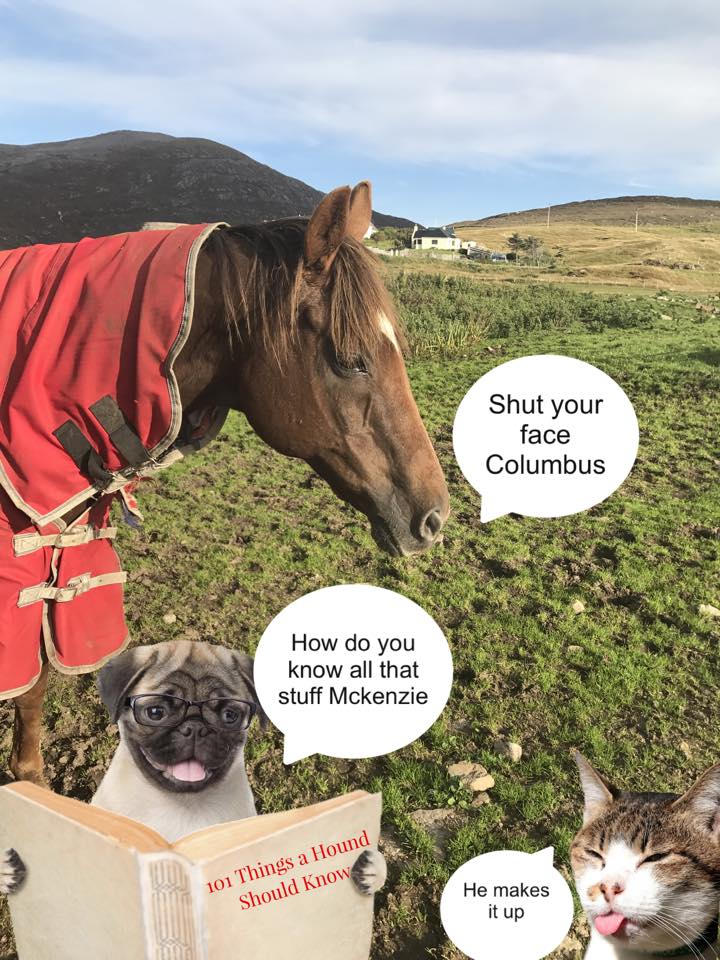 McKenzie, Shonnie the Pug and Columbus. Despite the bickering, they all love each other really.

Having established McKenzie’s and Columbus’s credentials I should point out Shonnie the Pug is also a real life character. He’s a frequent patron of the Butty Bus. Here’s Shonnie with his favourite human i.e. Neillie – the person who buys him his regular dose of Lorne sausage. 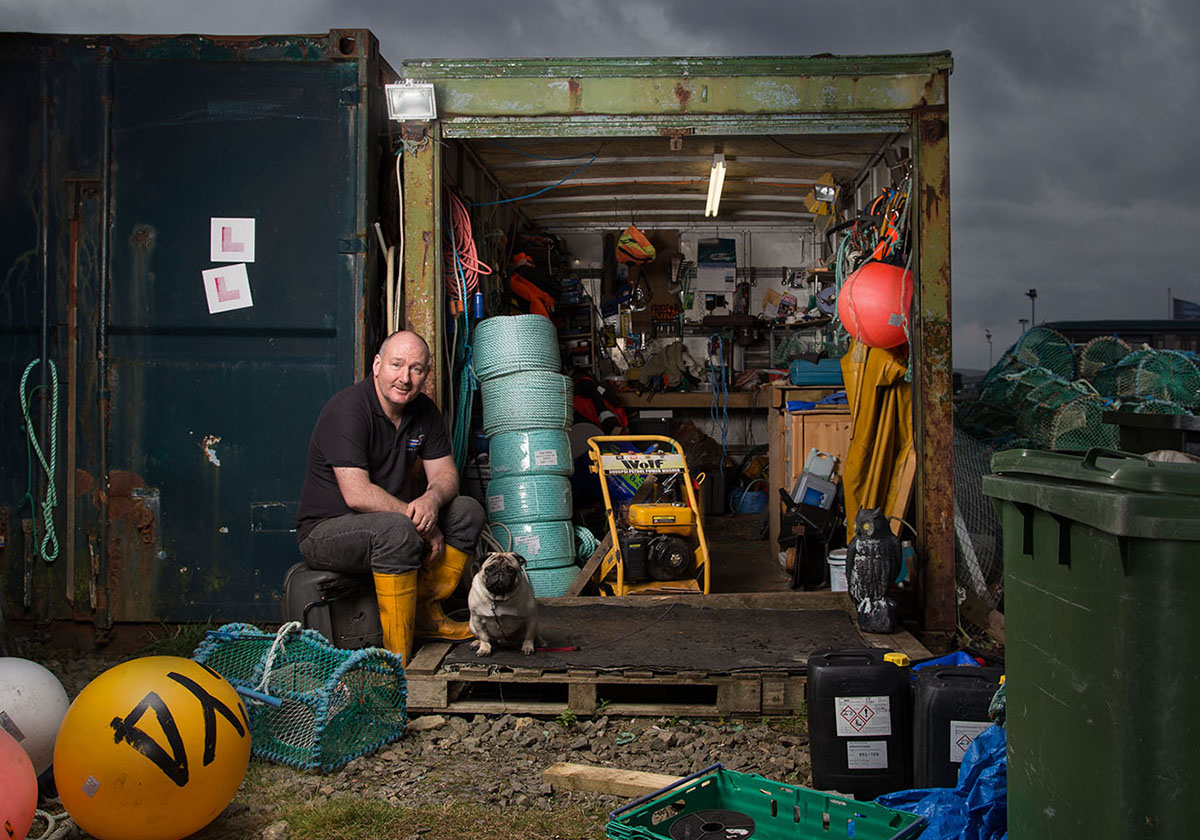 Note: all of the above took place within a 50 metre radius of the Butty Bus. There’s no need to travel far and wide for a sense of adventure, eh Columbus? 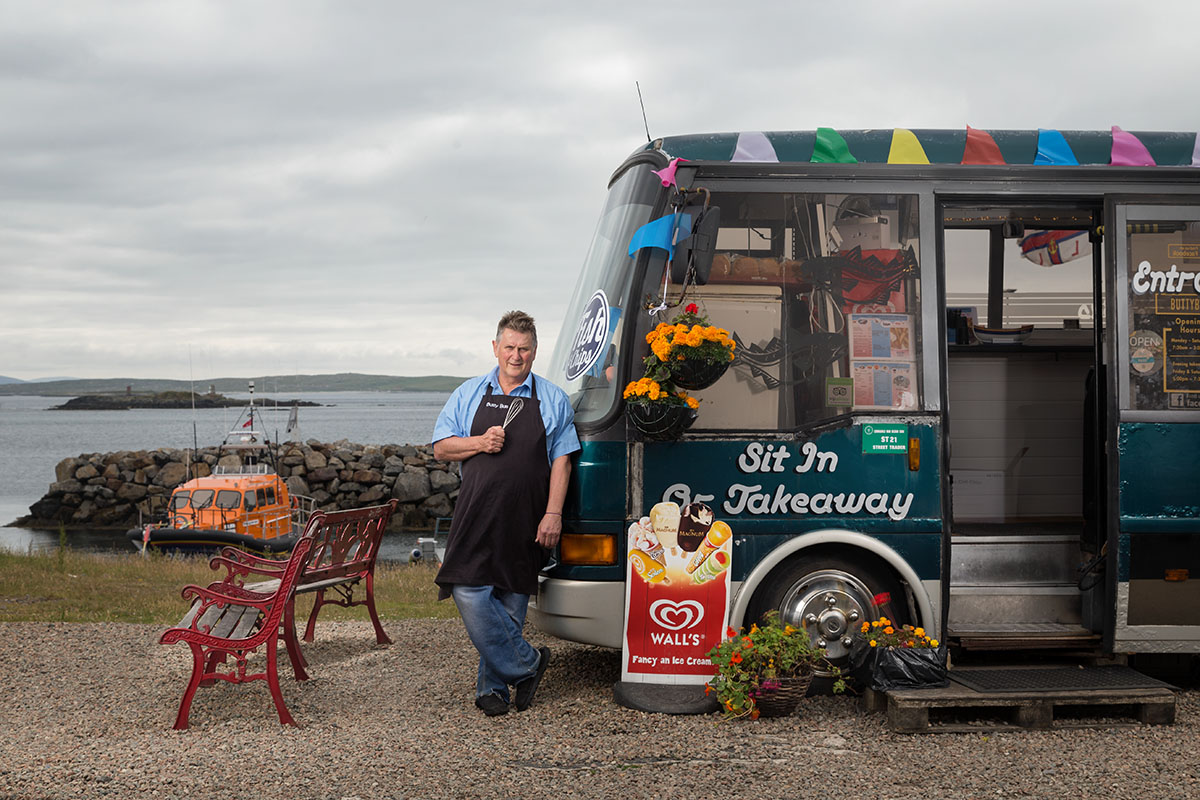