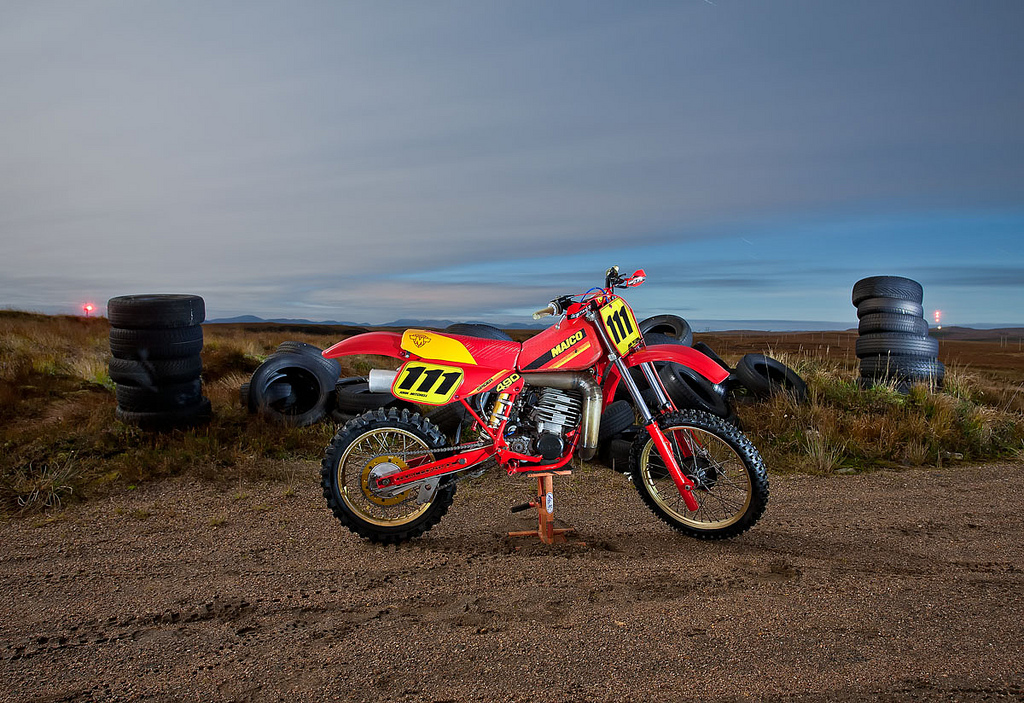 Earlier this year I was asked to do a moonlit photo session featuring John Neil Mitchell’s championship winning quadcross bike. John recently won the UK title for the third time (more info here). This month (October) was the first opportunity to get the job done – in part due to poor weather in previous months during the full moon period and also timing the shoot to coincide with both us being available. A few days prior to the shoot, I was visited by an Italian photographer, Loris. He’s been visiting the Outer Hebrides twice a year since 2005, capturing stunning sunsets, sunrises and landscape images all the way from Barra to the Butt of Lewis. He was familiar with my night work and asked if he could come along on a night shoot.

Wednesday, the day after the full moon, saw clear sunny skies all day, so plans were made to visit the off-road track in Stornoway where myself and Loris would meet up with John Neil and his race machinery at 10.30pm. If the skies remained clear, a good shoot was on the cards. Heavy cloud had rolled in from the south and was covering Harris by the time I was ready to leave. A quick call to John Neil, 60 miles north, confirmed skies were still clear in Stornoway. Time to set off and hopefully get to the track before the clouds rolled in….

Called round to the Am Bothan bunkhouse in Leverburgh to collect Loris, then pedal to the metal for Stornoway. Got there 10 minutes early so dug out a brand new lens that arrived in the post that afternoon. It’s an ultra-ultra wide angle 14mm prime, made by South Korean company Samyang. It’s a manual focus lens so I knew it’d take some practice and experience to get best results. Set up outside the Creed Recycling Plant for a couple of test shots so I could evaluate them on the computer when I got home.

In the above pic, I lit the container with a red gelled LED torch during the exposure. I  also used the Samyang 14mm for the shot below featuring the Maico motocrosser, racing quad and race marshall’s lookout post (garden shed). The lights either side of the Maico’s handlebars are a fluke –  a car drove by shortly after starting the exposure. The twists, turns, ups and downs in the road conspired to aim its headlights directly at the lens in those two positions.

At this point, I switched from the 14mm lens to back my regular Canon 17-40mm – I didn’t want to run the risk of coming back home with a whole set of out of focus images. As it happened, the Samyang worked fine. I’ll post a review in the near future, including details of a DIY modification that makes focusing a whole lot easier than relying solely on the camera’s viewfinder and poorly calibrated distance scale.

My favourite of the night is at the top of the page: John Mitchell’s restored 1983 Maico 490. Red lights either side of the tyre stacks were provided by one of the Arnish Moor wind turbines (left) and the distant transmitter mast at Eitsal (right).

In the next shot we hung a racing shirt on the side of the shed. The bottom half of the shirt flapped around a little in the breeze during the 4 minute exposure, hence the blurred ATV logo. Another car drove by adding the twinkly lights either side of the tyre stack:

In the next pic, you can see the clouds had most definitely caught up with us. Heavy cloud cover really kills the quality of ambient light, so this next shot relies heavily on additional light (LED torch):

Cloud cover effectively wrote off the remainder of the session, making it impossible to shoot the quad in a style I’d intended. We decided to call it a night. Another attempt to capture the quad is on the cards for next month, weather permitting.

Not sure what our Italian photographer, Loris, thought of it all…. he’s thousands of miles away from home and enjoys photographing beautiful landscapes during daylight hours. I’ve taken him to a dirt bike track, next door to a recycling plant, where he gets to stand around in the dark, cold and increasingly cloudy night for three hours, watching me shine lights on a motorcycle, quad bike and a shed. He won’t be back in his bed at Am Bothan until 3am and he’s got a ferry to catch at 8am. He didn’t say much on the way back!

I think he liked it 😉