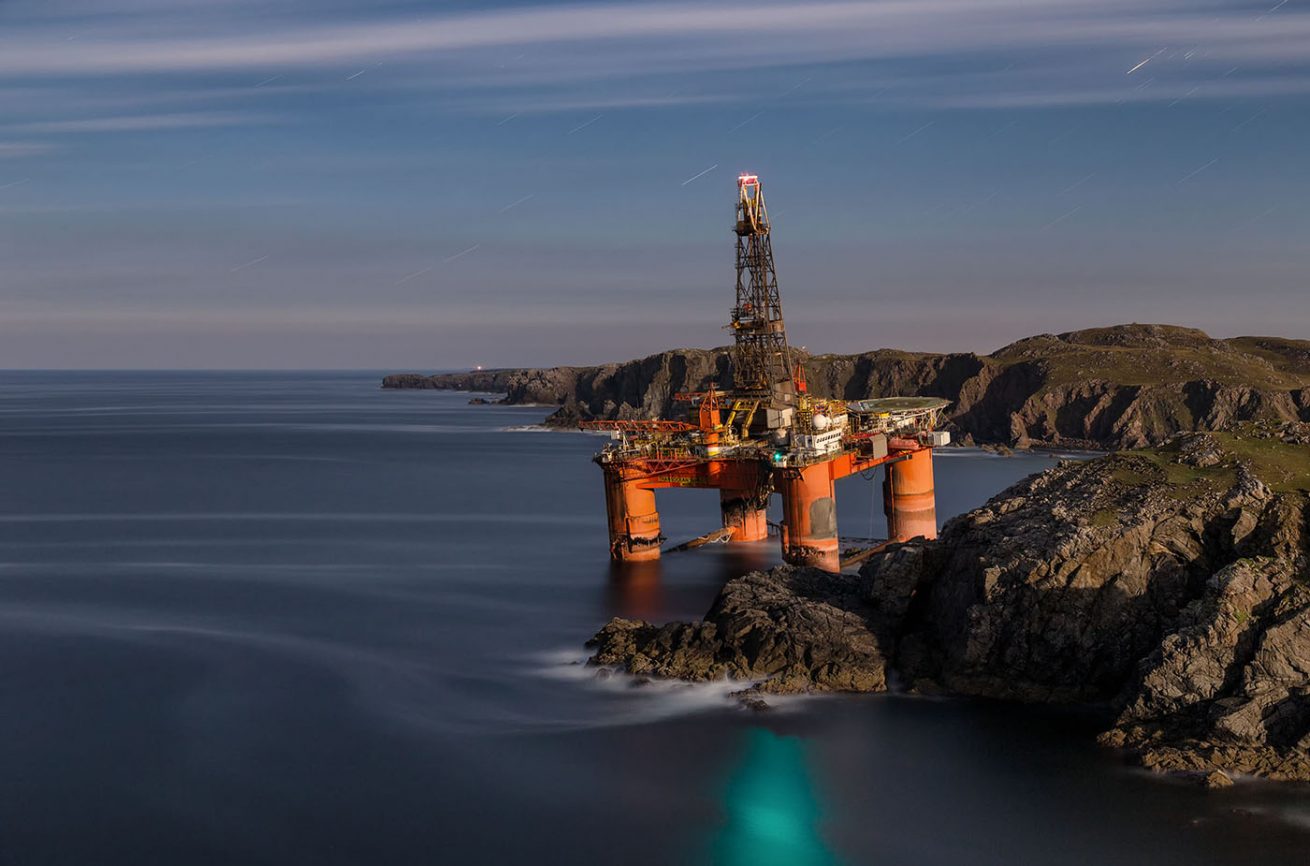 In August 2016 a decommissioned oil rig was being towed from Stavanger, Norway to ‘Blowtorch Beach’ in Turkey. Things didn’t go to plan…

The following morning (Tuesday Aug 9th), I got a phone call from one of the national tabloids. They were looking to buy a “spectacular” photo of the oil rig – something along the lines of one of my long exposure night time shots. I’d already checked when the next full moon was due. It was more than a week away,  which didn’t fit in with the newspaper man’s schedule i.e. the rig story wasn’t likely to be a hot news topic in a week’s time. The journalist asked if I could get a pic that night. No chance! Current conditions were awful and the forecast for the next few days was no better.

The approaching full moon was over a week away; Thursday August 18th. The long range weather forecast wasn’t great. Tuesday the 16th, two days before the full moon looked like the only night offering a possibility of clear skies. First port of call was online app The Photographers’ Ephemeris. I needed to know what direction the moonlight would be coming from so I could figure out the best vantage point. What I had in mind was a 2 hour long exposure to capture extended star-trails circling the rig. That would look pretty “spectacular”! I also checked tide tables for the area. I knew one of the flotation tanks at the base of the rig was hooked over rocks. There was a possibility the rig might rock around at high tide. If it wasn’t absolutely stationary, over the course of an extremely long exposure the rig would dissolve into a total blur. Low tide was the safest bet. Things were looking good: it turned out that being in position around 2am gave the best combination of circumstances i.e. low tide with moonlight coming over my right shoulder to illuminate the rig. All I needed was  some decent weather… 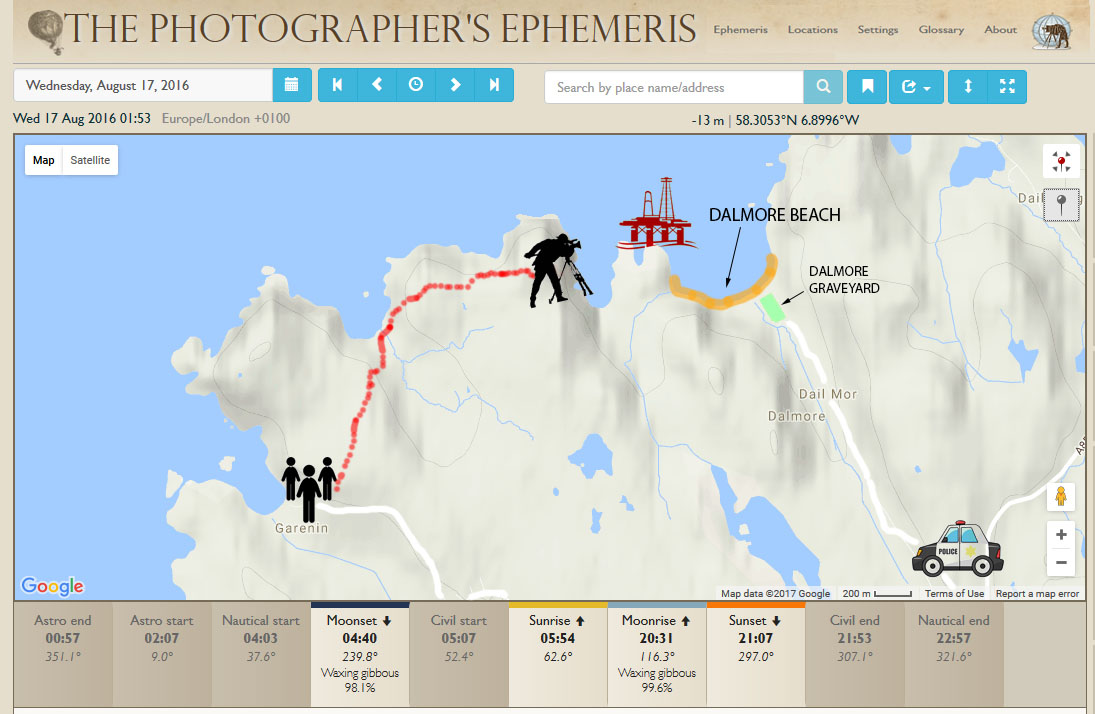 By now, Transocean Winner was the main topic of conversation across the island. Several people asked if I’d been to photograph it. When I mentioned I was planning a trip to Dalmore on Tuesday night, I soon found I had two accomplices willing to come along for the ride.

Fast forward to Tuesday 16th. By now a land, sea and air restriction zone had been placed around the rig. Hikers were forbidden to walk the fringing coastal paths and fishermen were told to keep their boats at a distance. The most direct access was via the road to Dalmore cemetery (see map above) but I’d heard police were patrolling the road entrance around the clock. We set off from Harris shortly after 10pm. Sure enough, when we reached the turn off for Dalmore cemetery around midnight, there was a police car and occupant stationed at the junction. Our contingency plan was to head to Garenin Black House Village approx 3 miles west. From there, a coastal footpath across the cliff tops would take us back towards the rig. It took about an hour of stumbling around in the dark, crossing streams, sinking knee deep into peat bog, climbing across fences and walking close to the cliff edge before the rig came into view.

Weather-wise things didn’t look too promising. It wasn’t raining but the (almost) full moon was regularly obscured by heavy cloud. When it did make an appearance, the skies were hazy. The prospect of capturing a 2 hour long star-trail shot was out of the question. Having come this far I set up anyway. Focusing in the dark was a matter of guess work and hoping for the best. I ran off a few 6 minute exposures. The pick of the bunch is at the top of the page.

To the naked eye, the greenish-turqouisey reflection in the water wasn’t as apparent as you see in the photo. Zooming in reveals it’s the result of a navigation light on top of the cabin that operates one of the anchor chains located inside the platform’s legs. 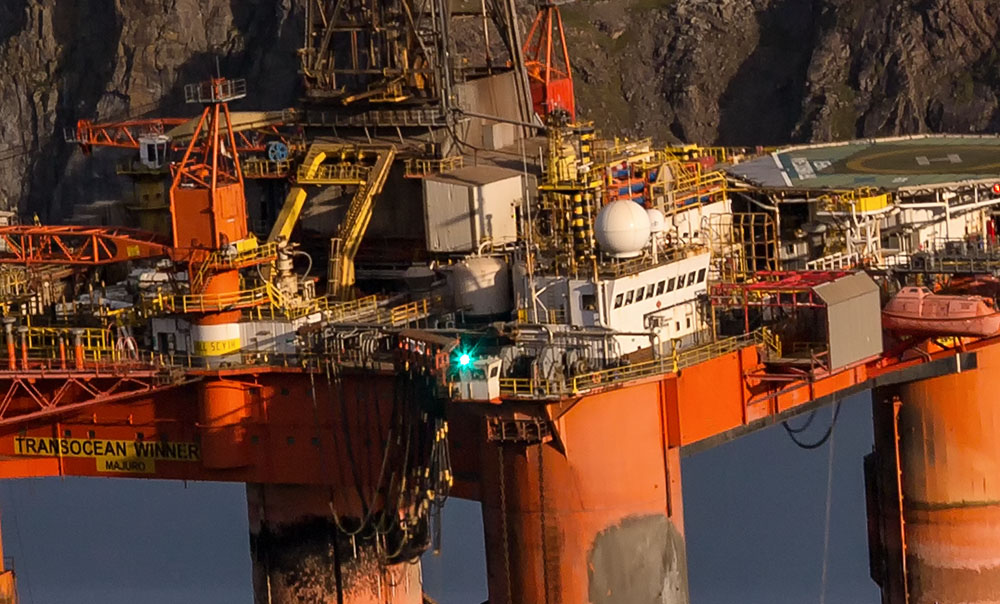 I emailed my photo to the journalist who’d originally contacted me. As expected, Transocean Winner was already old news as far as the tabloid press were concerned and they weren’t interested in purchasing the image. A few hours later I shared the pic on facebook. Within minutes I was contacted by the crew who were now aboard the rig, carrying out prep work for the attempted refloat.

Every cloud has a (diesel stained) silver lining

Transocean Winner was boosting the island’s economy: hotels and B&Bs benefited from an end of season flurry of activity: “Would you like a room with a view of the rig?” Locals were employed to ferry salvage workers to and from the rig; some on standby rates of £900 per day.  Sylvia Tervoort, enigmatic salvage officer who oversaw the Transocean Winner’s rescue operation, became something of a local hero.

If Ealing Studios still existed, the amazing story of Transocean Winner’s visit to Hebridean shores would be coming to your local multiplex very soon!

PS. More than you ever wanted to know about the Transocean Winner incident in this excellent piece by Tom Lamont: Where Oil Rigs Go To Die

PPS. ‘Where Oil Rigs Go To Die’ is also available as a podcast.