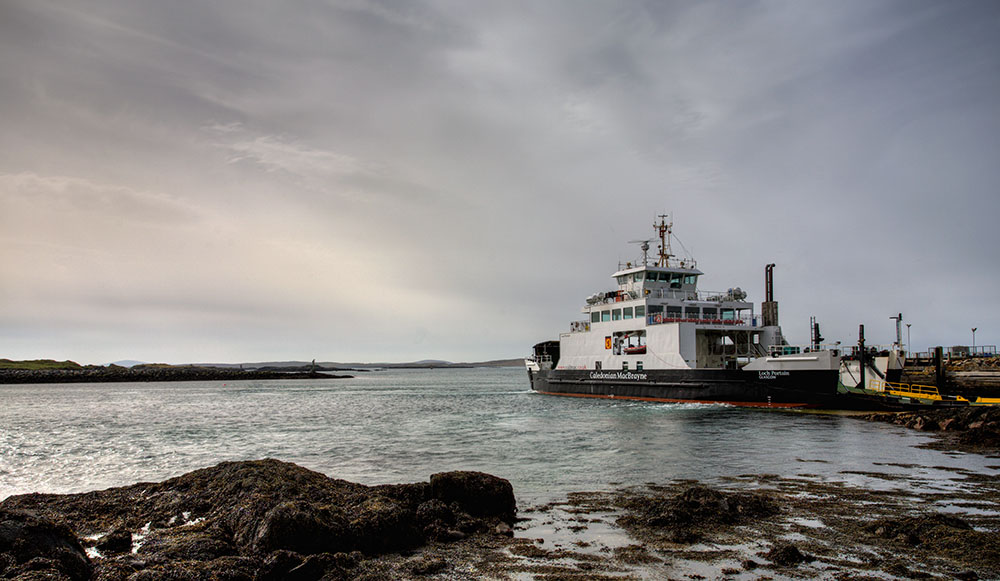 The second part of the War Memorials project saw me depart from Leverburgh aboard the MV Loch Portain, across the Sound of Harris to Berneray. Continuing south through North Uist, Benbecula, South Uist and Eriskay, followed by another ferry crossing to Barra.

Landing on Berneray, the first war memorial of the day was about a mile from the ferry terminal. I had to ask someone where it was. Although I’ve visited Berneray several times before, I had no recollection of seeing a war memorial. Turns out it’s right beside the road, next to the doctor’s surgery. It’s not a grand affair – a modest pillar surrounded by a nondescript metal railing. Kind of tricky to find an angle that allowed me to separate the monument from its surroundings but with some extra light thrown on the subject, I was happy with the result:

Next stop, the North Uist war memorial sited above the A865 near Clachan na Luib on North Uist.

With it’s elevated position, the memorial offers good views to the north, east and south. This next shot looks north towards Lochmaddy:

Continuing south again and across the causeway to Benbecula. After a brief diversion into Balivanich for supplies, I headed back to main road and stopped off at the memorial commemorating the men of Benbecula who lost their lives in WW1 and WW2.

Three memorials in a row, the contents of the inscriptions have an effect. As if to compliment my frame of mind, the wind picked up. Moody looking skies replaced fluffy clouds as I headed for the South Uist memorial. In addition to the men of South Uist, the engraved plaques also list the names of men from Eriskay.

When I first visited the Outer Hebrides in the early 1990s, Eriskay was only accessible by boat. In 2000 it was connected by causeway to its nearest neighbour, South Uist. There were concerns the local shop may be forced to close due to residents driving north to the larger Co-op store on South Uist. If anything, the opposite is true, with people from South Uist crossing the causeway to visit Eriskay’s community shop. Result!

As mentioned above, the men of Eriskay who died in WW1 are included on the South Uist memorial. Eriskay doesn’t have its own dedicated memorial. I had some spare time before boarding the last ferry of the day to Barra. I headed for St Michael’s church. Under normal circumstances a ship’s bell sits outside the church. When I arrived on the scene it was missing. I’ll explain in more detail in my next post but to summarise, the bell from German warship SMS Derfflinger was on loan to a council in England as part of their own WW1 commemorations. Here’s an iPhone pic of the bell as supplied to me by St Michael’s parish priest, Father Donald MacKay:

Next, a 40 minute ferry crossing to Barra. The Barra war memorial is on the road to Vatersay – itself a small island, which like Eriskay was connected to its nearest neighbour by a causeway in 1991. My initial plan was to photograph the Barra war memorial at dawn but I decided to pay it a visit prior to bedding down for the night in the back of the van. Although the evening light was fading, I decided to break out the strobes and give it a shot (or ten).

You’ll have to look really close but I managed to capture Kismul Castle in the background. The angle of the shot was also influenced by the position of a recently built house i.e. I positioned the camera to hide it behind the monument.

Next stop was  Borve camp site, a couple of miles outside Castlebay – overlooking Seal Bay and the Atlantic Ocean. I didn’t need electrical hook-up and would be heading off early in the morning for the 7am ferry to Eriskay. “That’ll be £7”, the owner said. “Bargain” I replied, handing him a tenner. Heated up a tin of soup on the one ring camping stove. Fired up the Kindle and read a couple of pages of John Steinbeck’s Travels with Charley before falling asleep to the sound of waves crashing on the beach below.