Welcome to Barra and Vatersay 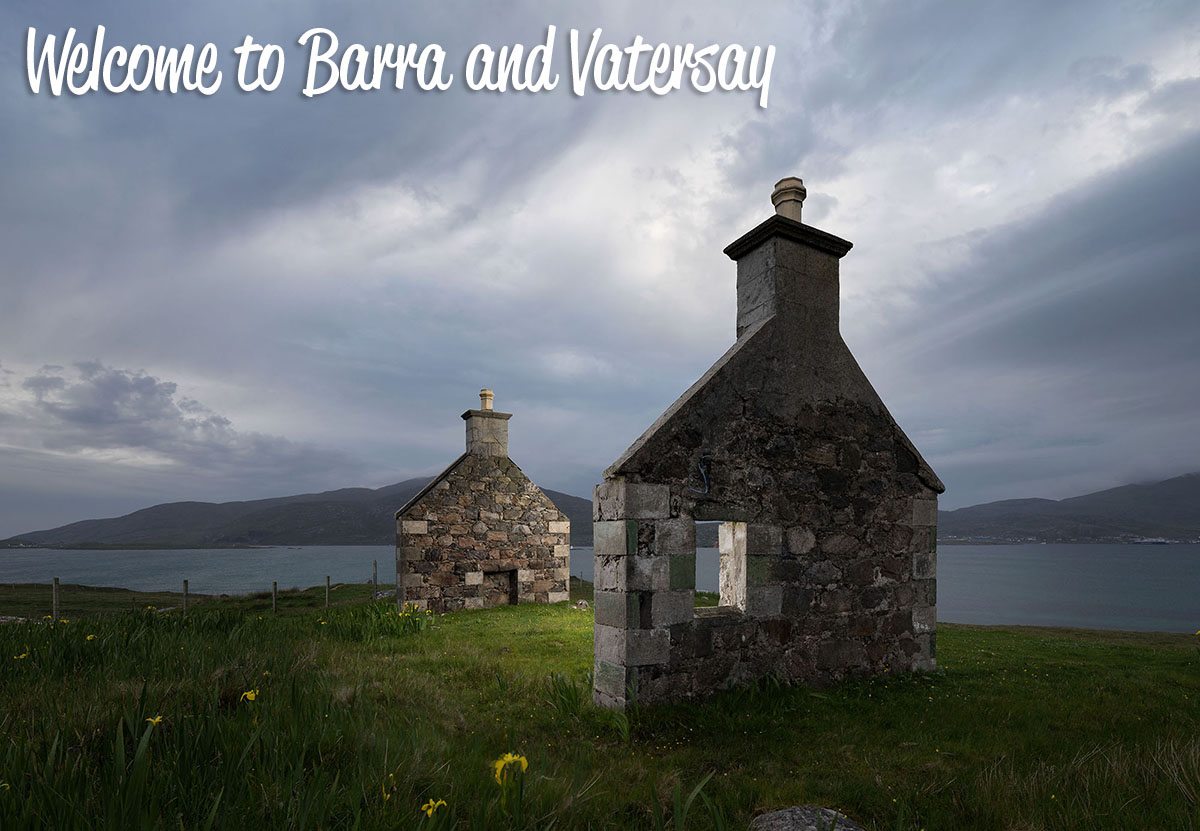 During 2017 I took my camera on several road trips, photographing buildings old and new for a multi-agency funded project entitled the ‘Western Isles Architectural Trail’.

Over the next few months I’ll share some of the stories and photos from my travels.

I’ll start at the southern end of the chain of islands that make up the Outer Hebrides.

The Isle of Barra is probably best known for having the only airport in the world where scheduled flights use a beach as the runway. Tràigh Mhòr (Big Beach) has three runways, set out in a triangular formation. This allows the 18-seater Twin Otters that serve the airport to always land into the wind. Flight times are determined by the rise and fall of the tide. I bumped into a man and his dog while taking this shot of the runway – a heart surgeon from Manchester, on holiday with his dog Jagger. 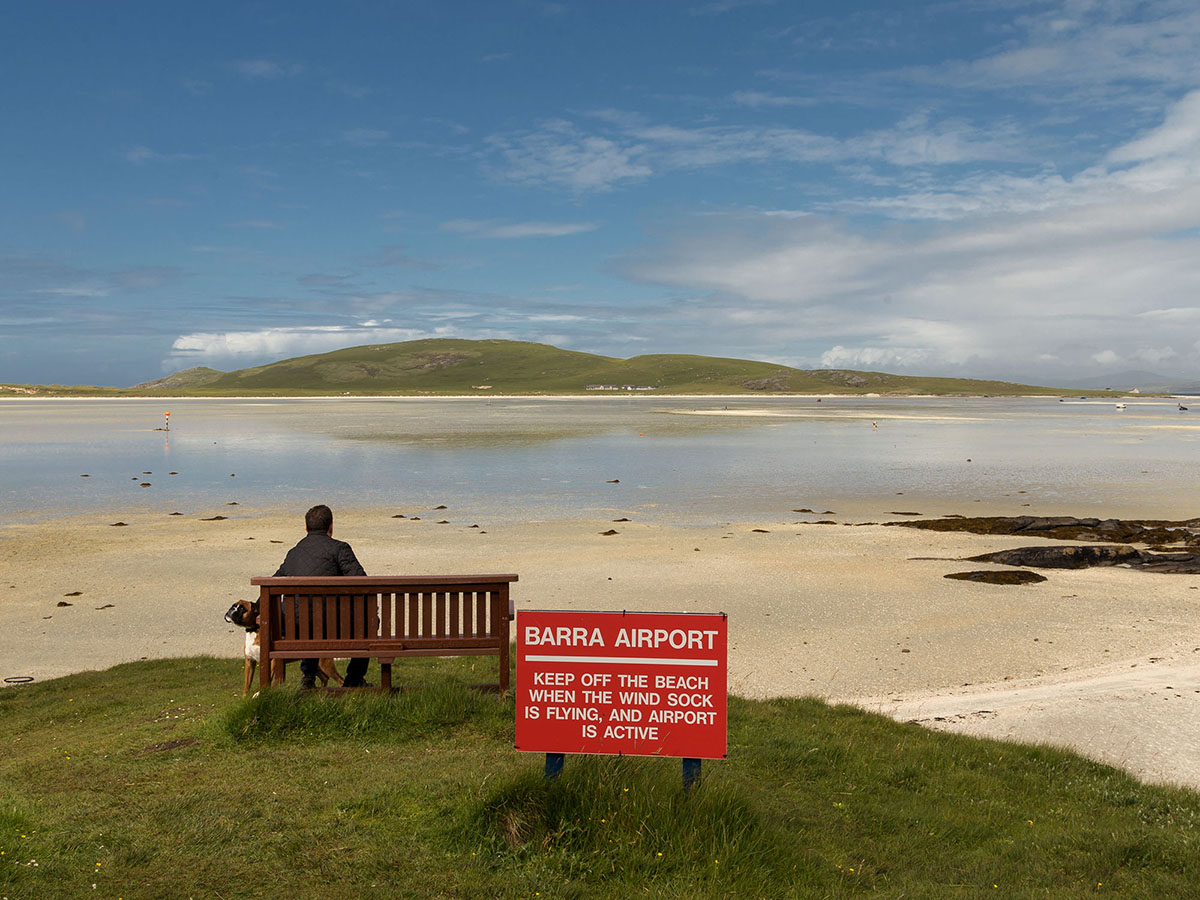 Next, I headed to the airport building for lunch. Barra Airport Cafe also serves duty as check-in, security gate and departure lounge. Arriving air passengers collect their luggage from a six bag-capacity conveyor belt housed inside a small perspex shed beside the control tower. It looks like a cross between a bus shelter and snoutcast refuge, minus the dimps. 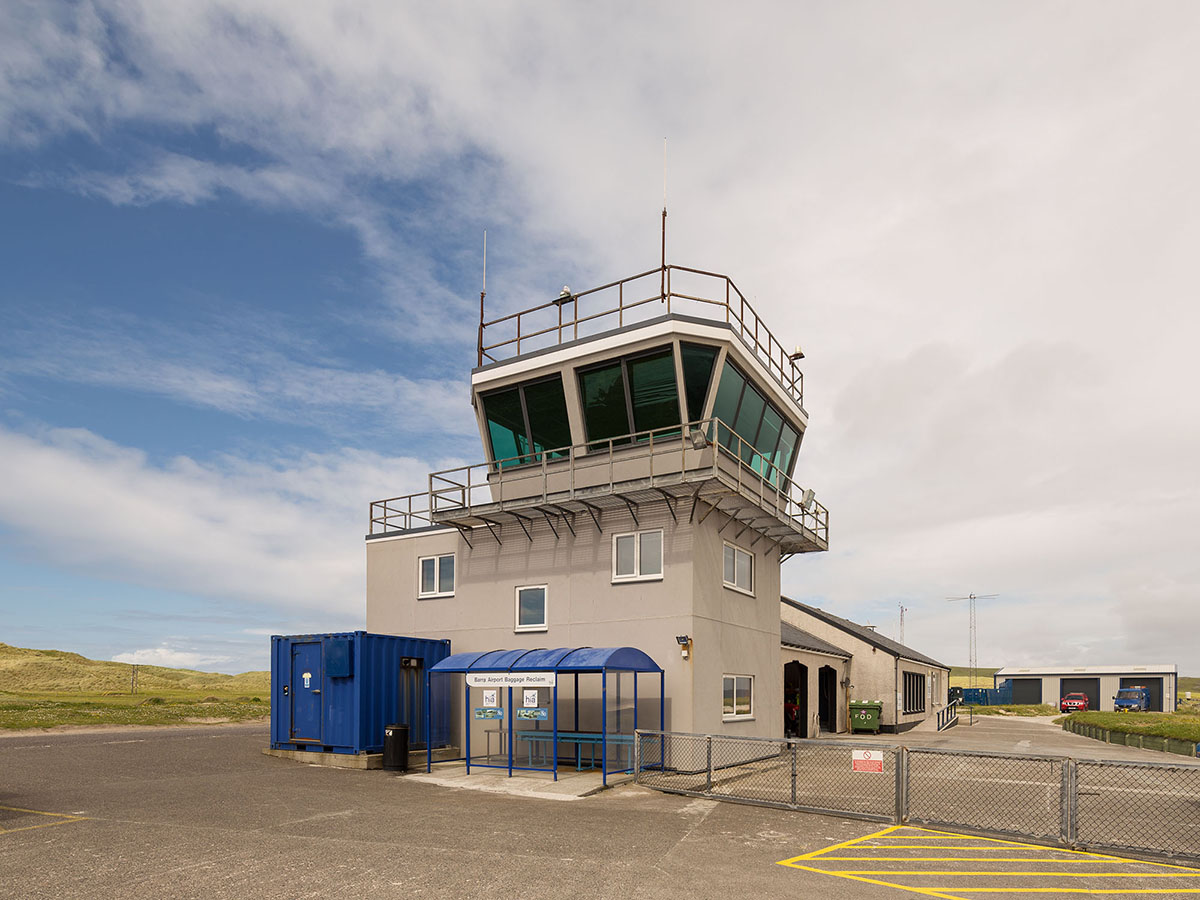 I was still dining when the flight from Glasgow arrived, but I made sure I was back outdoors in time to watch the plane taxi along the beach, out of sight to its designated take-off point. 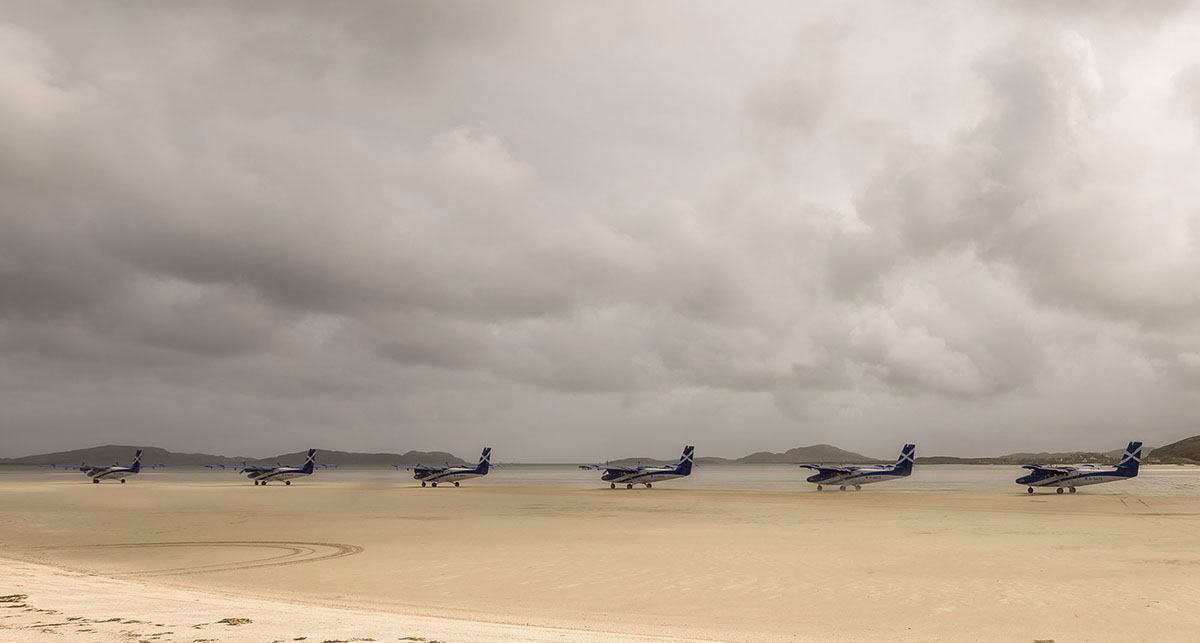 Minutes later it reappeared, already heading for the clouds. 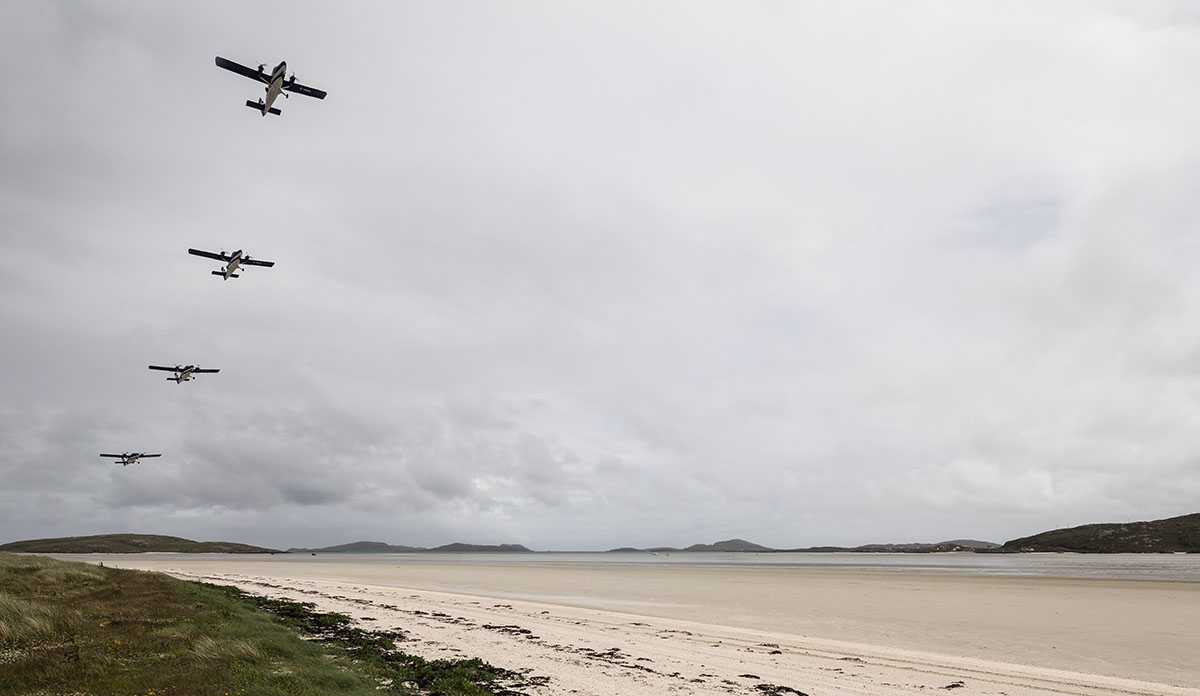 A couple of days after my visit, Barra Airport was in the news. The airport cafe’s facebook page shared a post detailing their experience dealing with a coachload of obnoxious tourists. Little did they know their post was about to go viral. Several newspapers picked up on the story. In this age of people bending over backwards to encourage favourable Tripadvisor reviews and the so-called ‘customer is always right’ (even when they’re not) attitude some visitors use as an excuse to act unreasonably, it was absolutely delightful to see thousands of people voicing their support for the staff of Barra Airport Cafe. 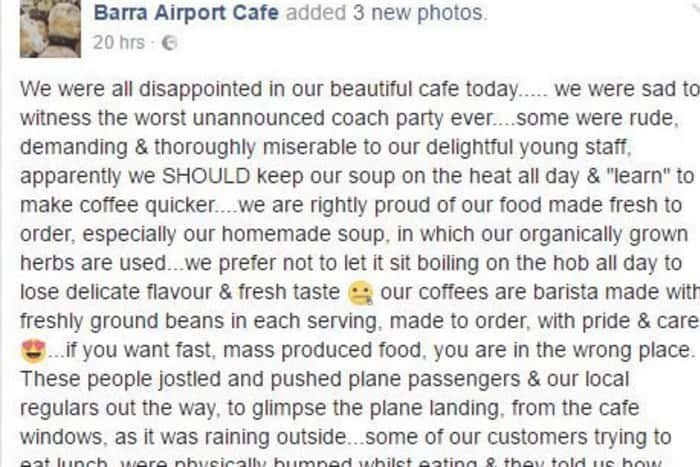 Leaving the airport, I headed to the south end of the island. Castlebay is home to the majority of the island’s shops. Overlooking the village from on high is a 19th century church, Our Lady Star of the Sea. From its vantage point there’s a good view of Kisimul Castle in the bay and the village’s main street: 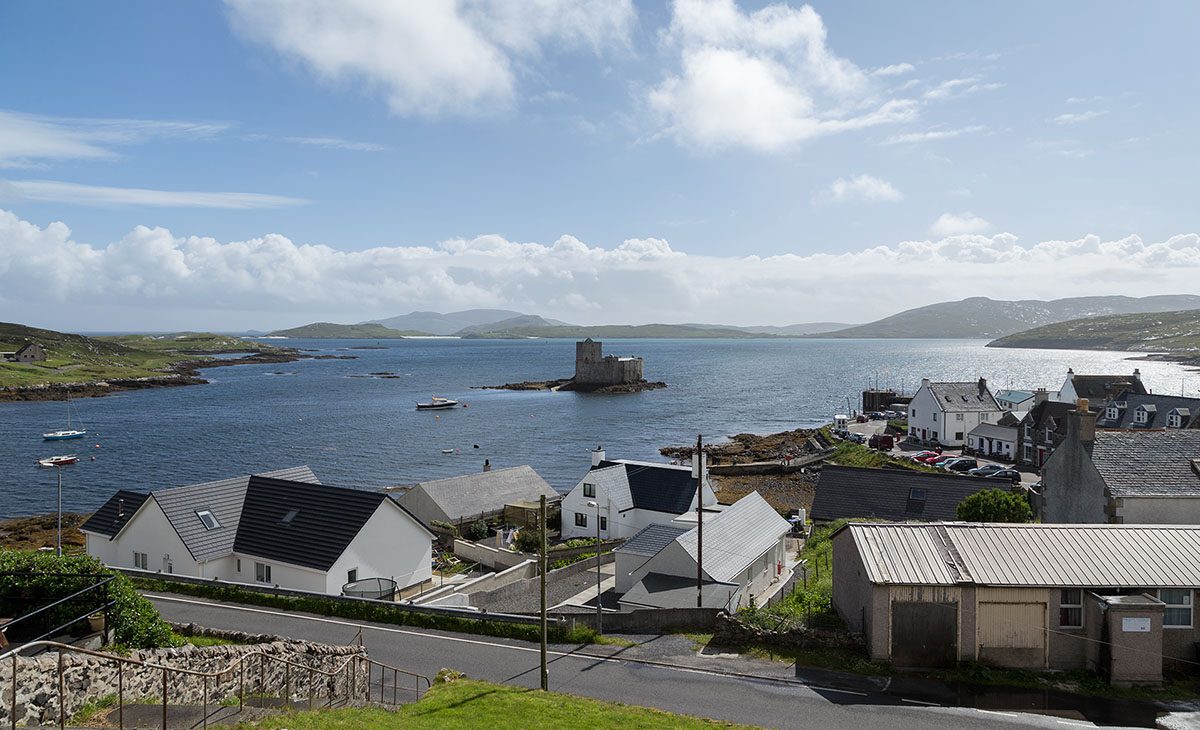 Our Lady Star of the Sea was on my list of buildings to photograph for the Architectural Trail: 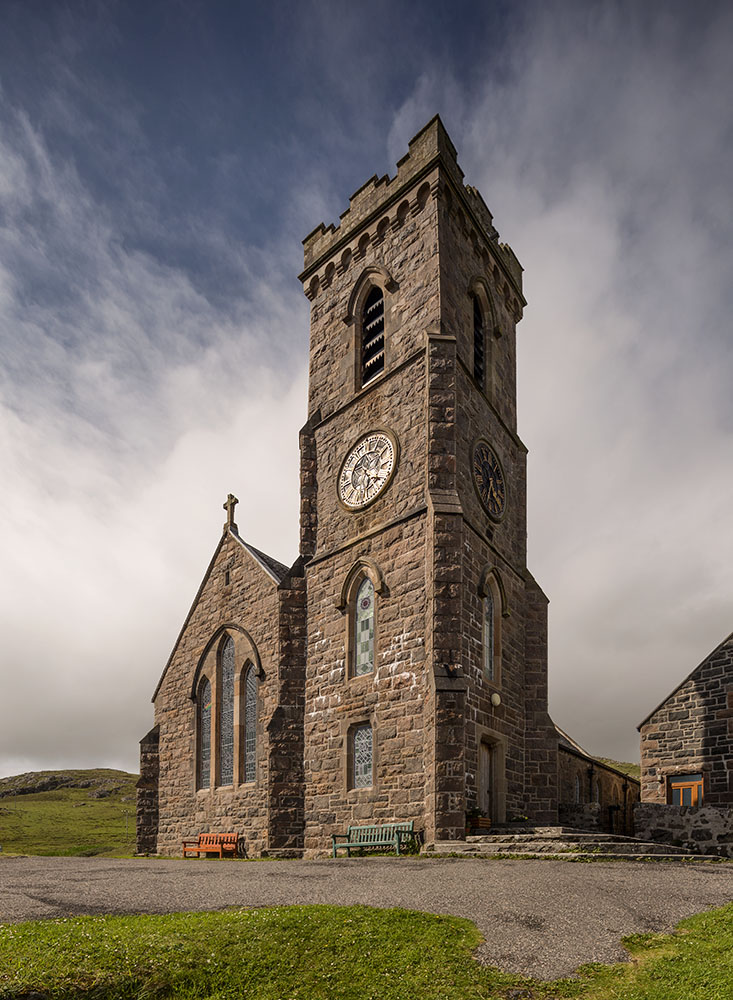 After taking a few shots of the exterior I went inside. On a table in the vestibule, a photo on the cover of the Scottish Catholic Observer gave me a stark reminder of the Manchester Arena bombing. The terror attack (which had taken place the previous month), claimed the life of Eilidh MacLeod – a 14 year old girl from Castlebay, Barra. The newspaper’s picture showed her coffin being carried to the church I was standing in. Eilidh’s funeral took place on June 5th, 2017 – the week before my visit. Eilidh lost her life in my home town. Now I was visiting hers. 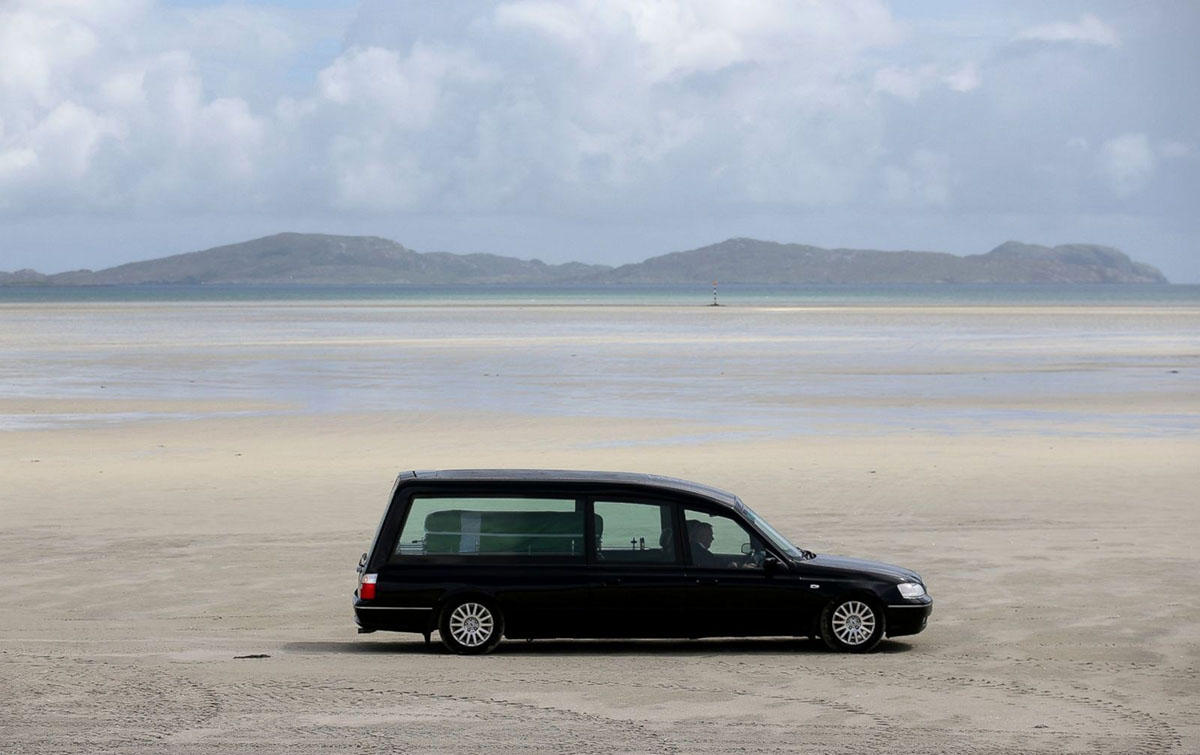 I walked down the hill to the main street, passing by the petrol pumps and Castlebay branch of the Royal Bank of Scotland – the only bank on the island. In a bid to save costs, the bank is currently under threat of closure. Our MP for the Western Isles, Angus Brendan MacNeil (a Barra man), is fighting to keep it open.

Turning right at the bottom of the street, I spotted the Screen Machine mobile cinema setting up on the pier. The Screen Machine tours many of the remote regions of the highlands and islands of Scotland, including regular visits to the Outer Hebrides. I called in to say hello to Iain, the driver, projectionist, sound man, box office attendant etc. If you ever get the chance to climb on board, you really should. It’s a superb 80-seater cinema. Once the titles roll, you completely forget you’re sitting inside a truck. It’s a brilliant service. Long may it continue. 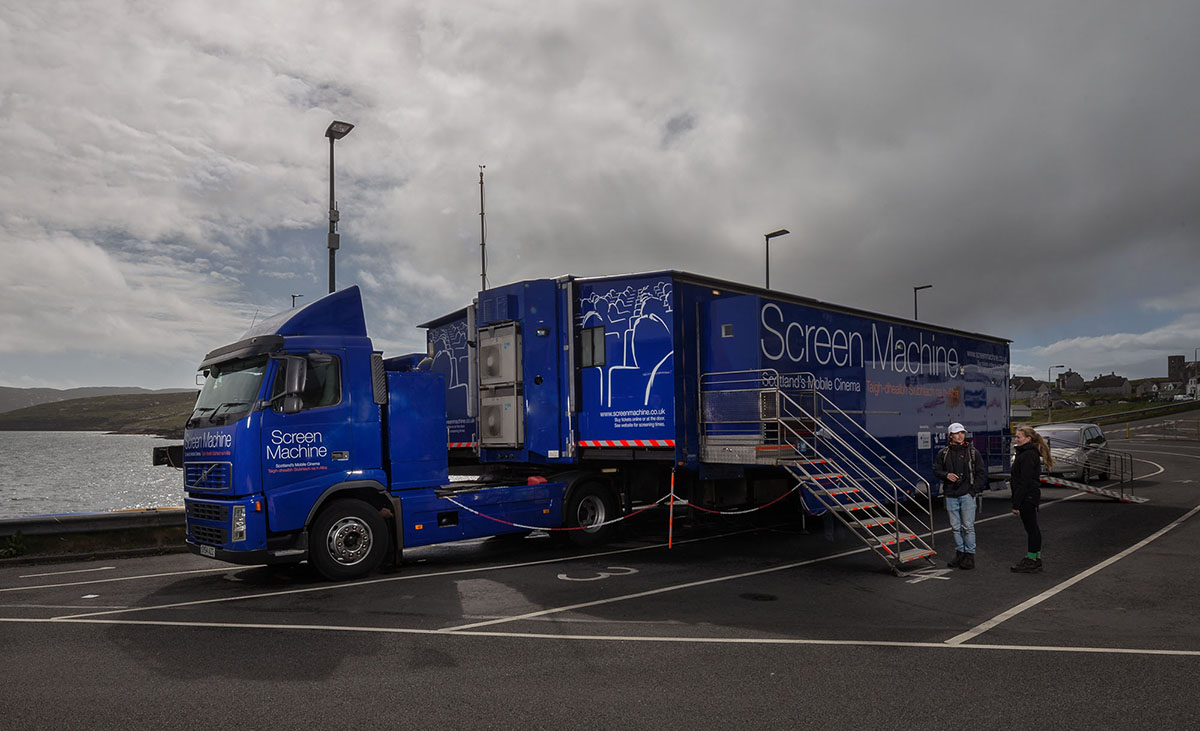 Shortly after sunset I set off from from Castlebay to the island of Vatersay for my last photo before heading back to Harris early the next morning. Vatersay is the southernmost inhabited island in the Outer Hebrides (population: 90). The 250-metre causeway connecting Vatersay to Barra was completed in 1991. I had a specific location in mind as I wanted to do my interpretation of a much photographed scene: the gable ends of an old croft house in the tiny village of Uidh. While figuring out how to frame the shot, inspiration struck. The lone gable ends reminded me of two giant headstones – a reminder of a former way of life. 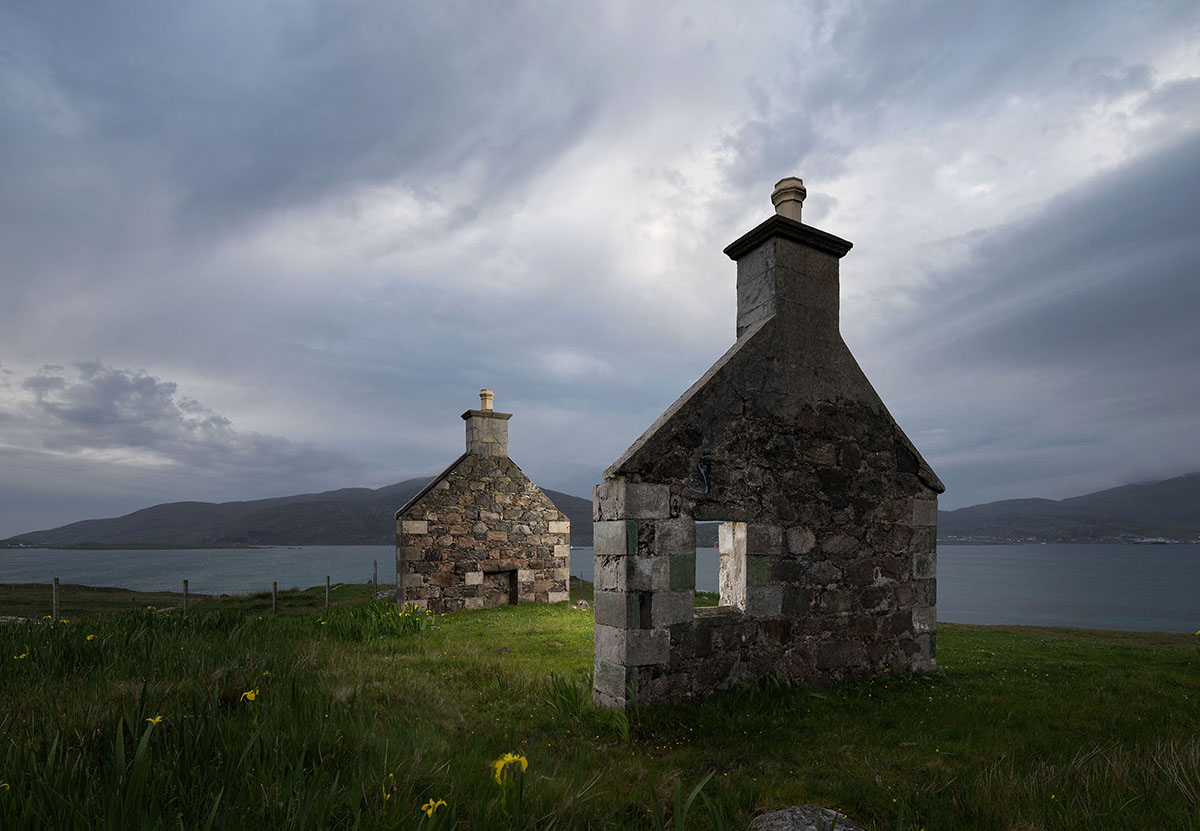 I’m sure my visit to Our Lady Star of the Sea a few hours earlier played a part.
I was trying to put the lights back on.

Note: this article was originally published on Caught by the River (May 2018).
If you haven’t visited their site already, take a look. Lots of great articles from a host of contributors.

Caught by the River “is an online meeting place for pursuits of a distinctly non-digital variety: walking, fishing, looking, thinking. Birdsong and beer. Adventure and poetry. Life’s small pleasures, in all their many flavours. It was – and still is – about stepping out of daily routines to re-engage with nature. Finding new rhythms. Being.”

2 thoughts on “Welcome to Barra and Vatersay”