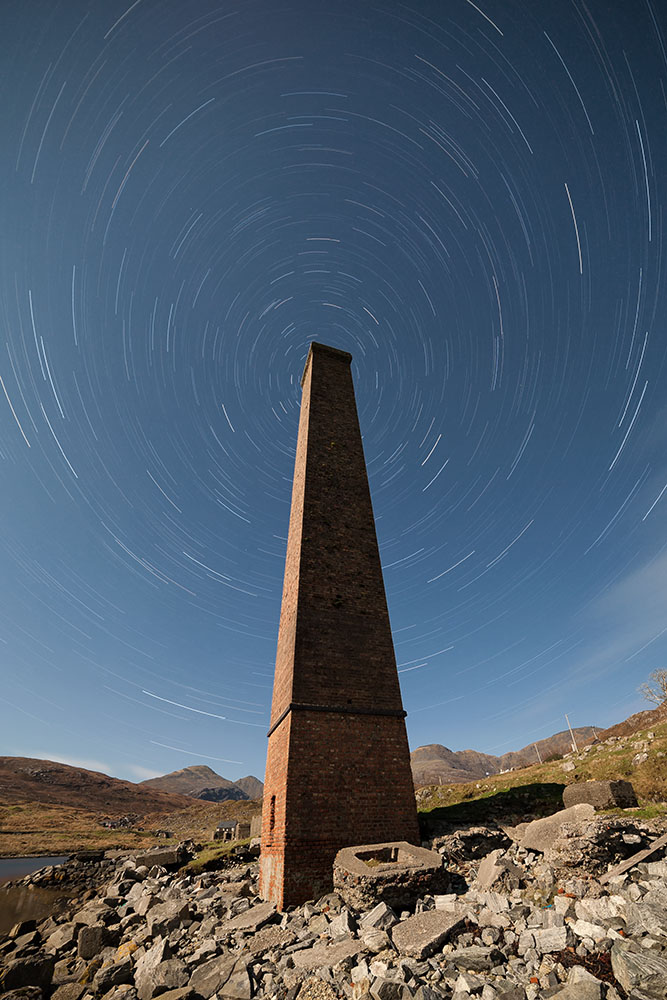 A very brief history of the Isle of Harris whaling station: in the early 1900s, a  Norwegian family ran a whaling station at Bunavoneader (Bun Abhainn Eadar), North Harris. After the First World War, Lord Leverhulme took over, and Lever Brothers ran things until its closure in 1929, following Leverhulme’s death. The station re-opened in 1950 for a few years. It was closed for good in the late 1950s.

I’ve been trying to get a decent night shot of this place for the past 2 years. 2011 has been a poor year in terms of clear skies coinciding with the full moon, therefore severely limiting photo opportunities for the aspiring night photographer. This month came up trumps and the night of November 10th and into the early hours of November 11th saw a super bright full moon accompanied by almost cloudless skies.

Following a drive around the Bays of Harris, taking several shots along the way, I figured a trip to the old whaling station could be worthwhile. I’d attempted a couple of long exposure shots here during August’s full moon which came out kind of OK but there were enough clouds around to make it less than ideal. Despite hanging around for a couple of hours, waiting for the skies to clear and let the moonlight through, things only got worse. Here’s the best of the two shots from August….

This time around, there wasn’t a cloud to be seen but the moonlight was coming in from the sea side of the tower, ruling out a shot from the same angle as the one I took in August.  While I was wandering around the foot of the tower looking for a good angle, I spotted the Big Dipper (aka the Plough). Using my very limited knowledge of the night sky, I could pinpoint the location of the North Star, also known as Polaris. See the diagram below:

To locate the North Star, extend an imaginary line from the two stars furthest from the ‘handle’ section of the Big Dipper. Your imaginary line needs to be approximately four to five times longer than the distance between the two ‘dipper’ stars. This will take you straight to the North Star.

It’s a quirk of the solar system that a line drawn through the earth’s north-south axis interects with the North Star. As a result, night photographs using long enough exposures will record startrails rotating around a point that happens to coincide with the position of the North Star. The southern hemisphere doesn’t have an equivalent so this only works for photographers sited north of the equator.

Most of my night photos are in the 3 to 4 minute range, which is sufficient to record the stars leaving brief light trails as the earth rotates. I’ve occasionally run to much longer times which in turn records much more dramatic trails.

Because the Outer Hebrides lies at a relatively northerly latitude compared to most (57° plus in Harris), the North star appears much higher in the sky than it would to someone a little closer to the equator (like Cornwall 😉 ). Because of this, it’s difficult to squeeze the North Star into the frame if you’re also trying to include a decent portion of  ground level subject matter in the foreground.

The whaling station chimney is one of  the tallest structures in Harris – we’ve got very few buildings higher than two stories!  Now the plan formed… find a spot for the camera that aligned the North Star with the top of the chimney. There’s only one perfect spot and I could see the angle would require positioning the tripod close to the shoreline. After a bit of precarious scrambling around and eyeballing the North Star’s position in relation to the top of the chimney stack, I settled on a spot and set up for 60 minutes’ worth of exposures.

It’s always a gamble committing to such a long exposure – there’s no guarantee it’ll work, plus you’re  giving away an hour of precious moonlight time that could yield a far greater number of shots. I loaded a pair of fully charged batteries into the camera, programmed the timer and hit the button. Time: 3.35am. I hung around long enough to check the second exposure kicked in after the first six minutes had passed by. It looked like everything was working as it should. I spent the next 54 minutes wandering around the nearby ruined buildings and foundations, went back to the van for a shot of coffee, listened to the radio, looked at the sea and pondered the meaning of life 😉

Got back to the camera just before the 60 minutes were up. Everything was still working OK, no condensation on the lens. The signs were good. All over at 4.35am.

The image at the top of the page is the result.

I used an interval timer and set it to take 10 x 6 minute exposures, with an interval of 1 second between each. If I’d simply locked the shutter open for an hour, the image would have been massively over exposed. I used a free Photoshop plug-in called Dr. Robert’s Stack-a-Matic to layer the images on top of eachother. By setting the blend mode to maximum, the programme reveals only the portions of the underlying images that are brighter than those above. Because everything effectively remains the same throughout, apart from the stars’ movement, the final image reveals the hour long startrails. What you’re actually seeing is how far the earth has revolved relative to the stars in that hour.

The final picture of the tower with the stars radiating around its top reminded me of something.
Remember this?