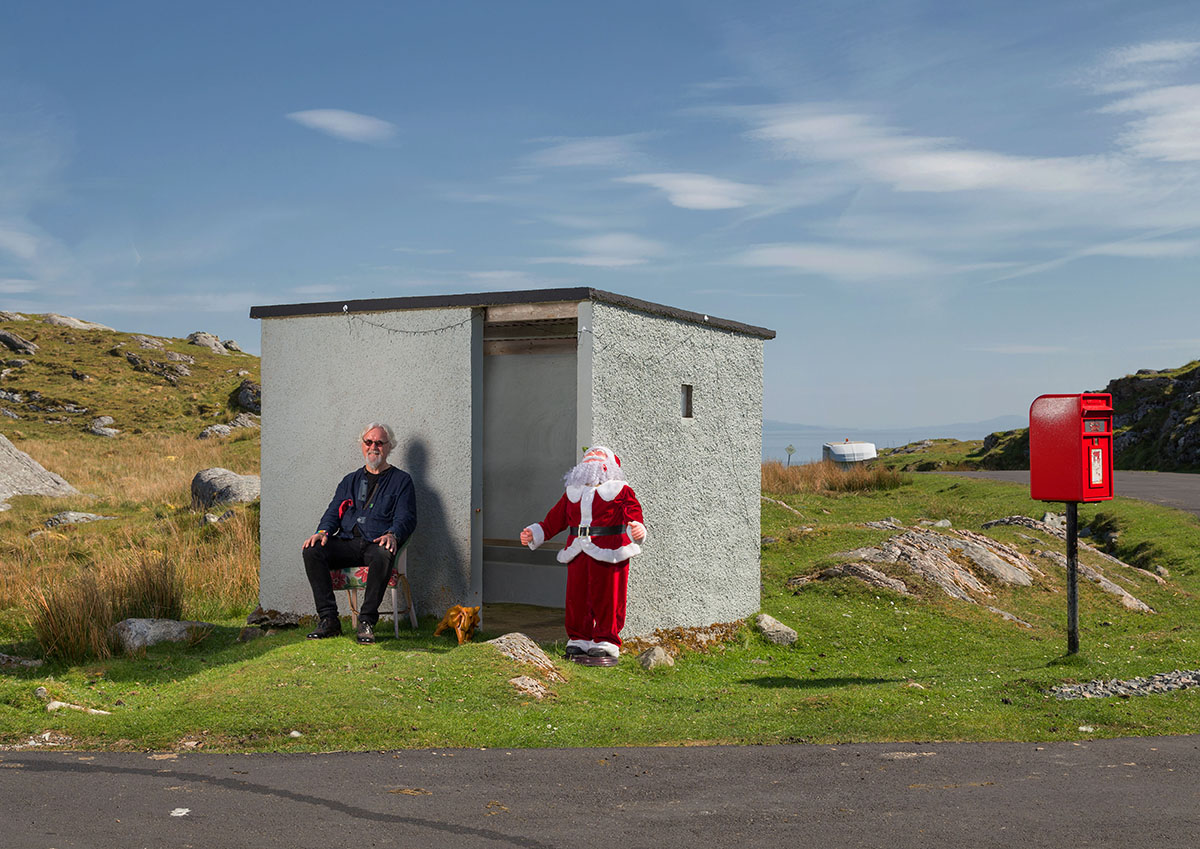 May 2018: I was contacted by the TV production company 7 Wonder. They were about to start work on a two-part documentary series for BBC 2, following Billy Connolly as he travels around Scotland and has various encounters with folk along the way. The makers were keen to include some Hebridean content, so in addition to pieces they’d lined up on Harris Tweed, Lews Castle and the Rocket Post, they were interested in featuring some of my photography. I met up with director Mike Reilly when he came to Harris on a pre-shoot recce. After showing Mike some of the portraits I’d taken as part of my ongoing WORK: Outer Hebrides project, he asked if I’d be up for photographing Billy in a similar style. YES!

We needed a location. I started describing a small concrete bus shelter in Manish, on the east coast of Harris and explaining how a four foot tall Father Christmas had been living in there for the past few years. It had a couple of chairs and a nice red post box outside. As I was describing it, I couldn’t help thinking ‘there’s no way he’s going to buy this’. “Sounds perfect!”, said Mike. 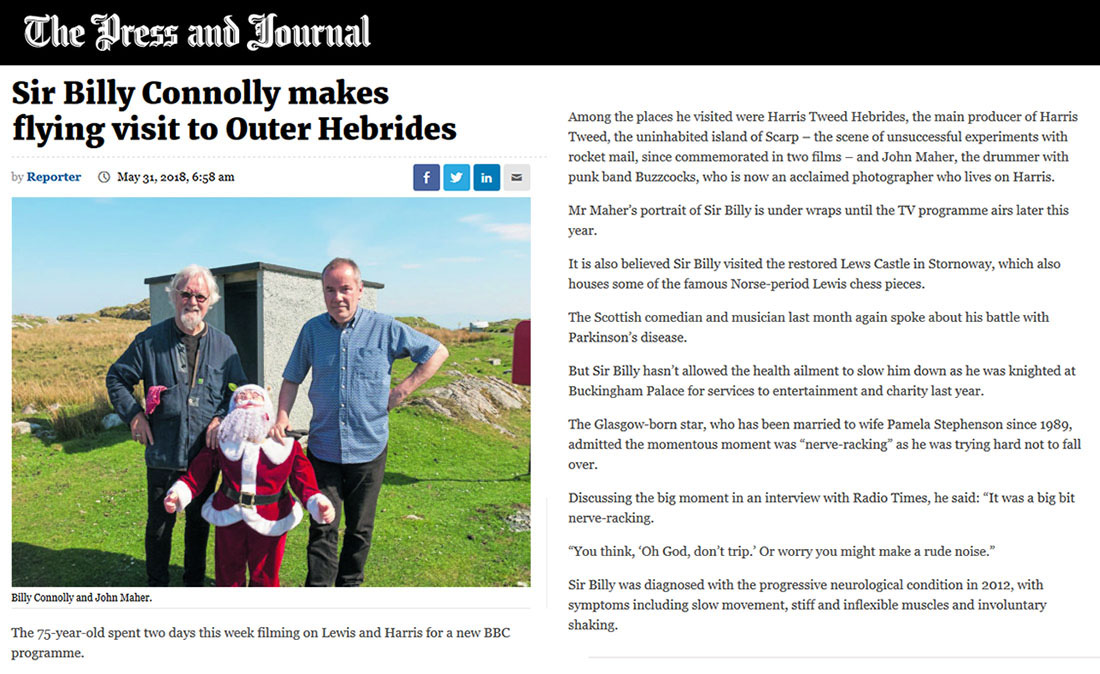 Press and Journal report Billy’s visit to the Outer Hebrides

The scene basically amounted to me being filmed while setting up the shot, photographing Billy and the other shots that went into the final image you see at the top of the page.

To quote the man himself:

A couple of outtakes… 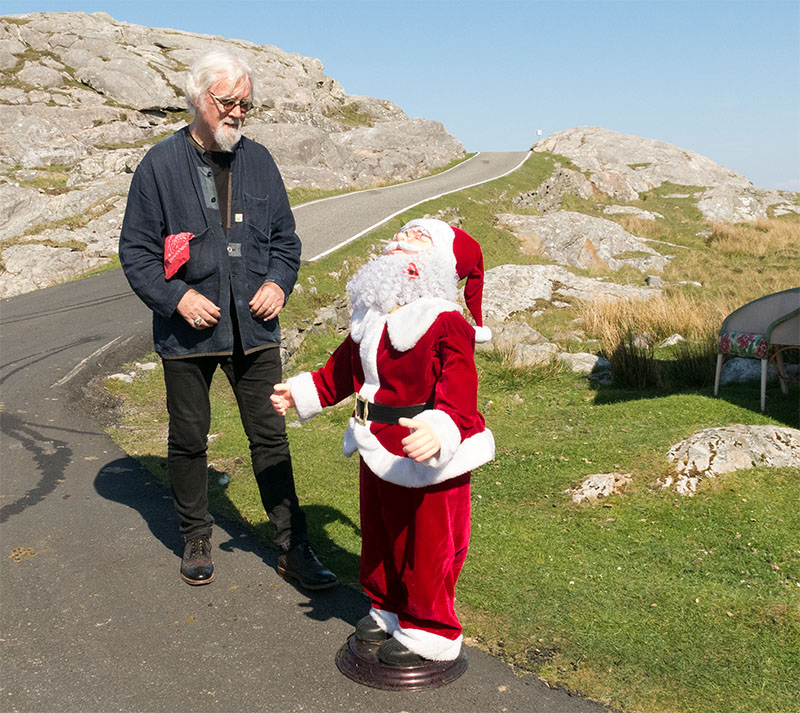 Billy and Santa rehearsing their lines 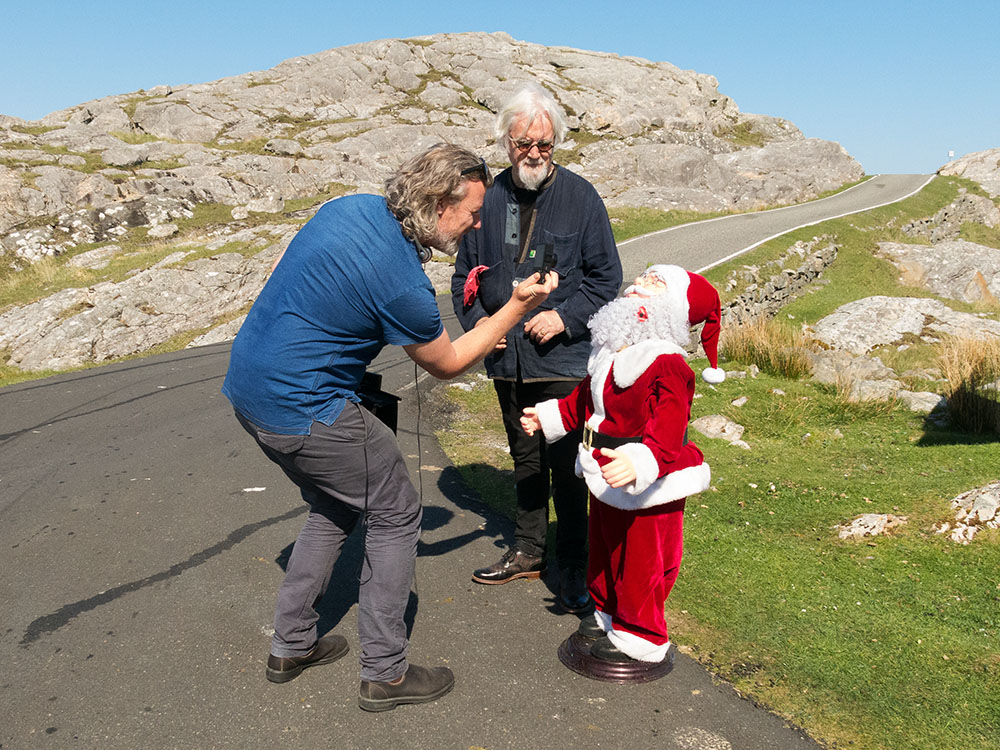 I’ll get my coat

Portrait shots in the can, Mike wanted to revisit the Harris Tweed Company shop in Grosebay – he was kicking himself for not buying a jacket he’d tried on there a couple of weeks earlier when he was up here on his pre-shoot recce. Billy headed back to the hotel in Stornoway, while I led a three vehicle convoy along mile after mile of single track road, skirting the east coast of Harris, arriving in Grosebay just before closing time. Despite having lived on the island since 2002, I’d never set foot inside the shop before. It’s an impressive setup with some very high quality gear! Twenty minutes later we departed, but not before the Harris Tweed Company’s takings for the day had been substantially increased! 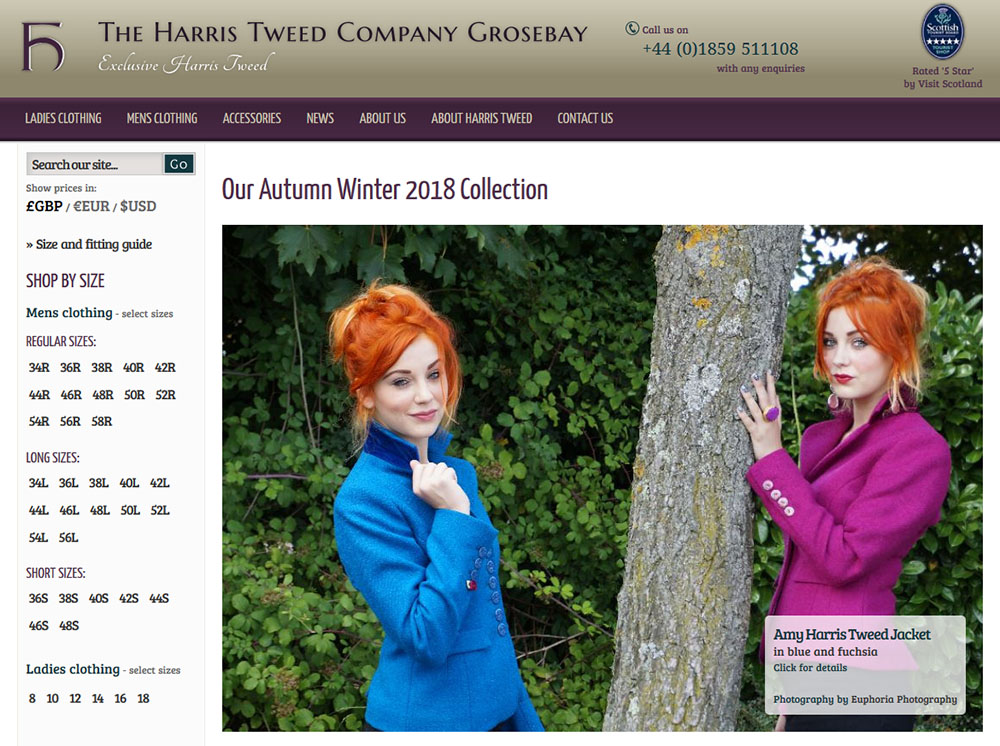 Get out the drum kit

With Billy already on the road to Stornoway and the crew’s shopping spree over, I thought that was a wrap. But Mike said he’d like to shoot a little more footage, ideally with me sitting behind a drum kit, bashing away to Ever Fallen In Love With Someone You Shouldn’t’ve. Hopefully my playing would somehow synchronise with the original track at the editing stage. So Mike (the director), Jacqueline Houston (series producer) and myself headed for Leverburgh, dragged out the drum kit and proceeded to annoy the neighbours (including Mackenzie the weather forecasting horse) for a while.

Couldn’t resist taking a stab at syncing some of Jacqueline’s iphone footage with a Top of the Pops appearance from 1978. 40 years apart!

Also, thanks again to Mike and Jacqueline for sending me a couple of on-location pics from the day – I’ve used one on the front of the video clip above. By the way, that house in the background behind the drum kit, is the same one featured in this post about wee Matilda. 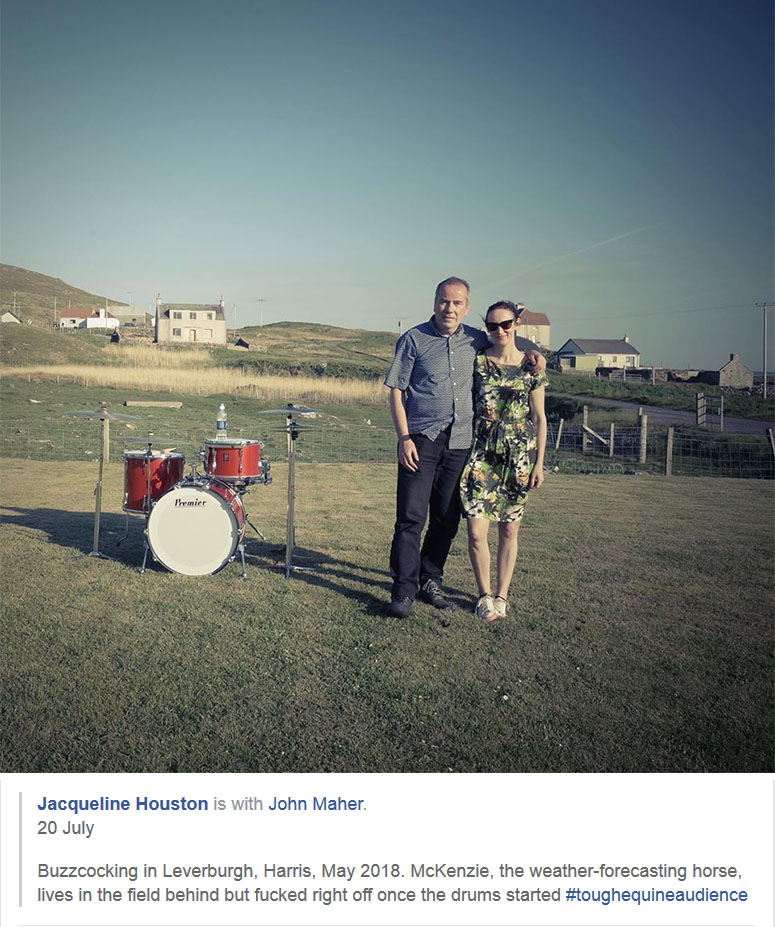 As with many TV shows, this one has an interesting plot twist. Skipping forward a few months, Mike and his team edited, compiled and presented the two finished episodes to the BBC. At this late stage, someone at the Beeb insists they add contributions from a host of celebrities. They had to make room, so Santa, myself and no doubt some others, got the heave-ho-ho-ho.

The missing sequence consisted of Mike and his team filming me as I went through the process of photographing Billy. As with many of the other portraits from my WORK: Outer Hebrides series, the final image is made up of several exposures, with light added to different sections of the scene. I don’t have access to the footage Mike and his crew shot on the day so I’ve compiled a short slideshow with captions, to show how the individual shots were lit. It’s not a patch on what Mike & Co did but hopefully it’ll give you a rough idea of how the photo of Billy and Santa came together.

I called in to see Santa on Christmas Day. He was safely back home after a busy night’s work, a bottle of his main sponsor’s tipple in hand, packet of Spirals tucked into his belt and looking forward to a long spell out of the limelight. 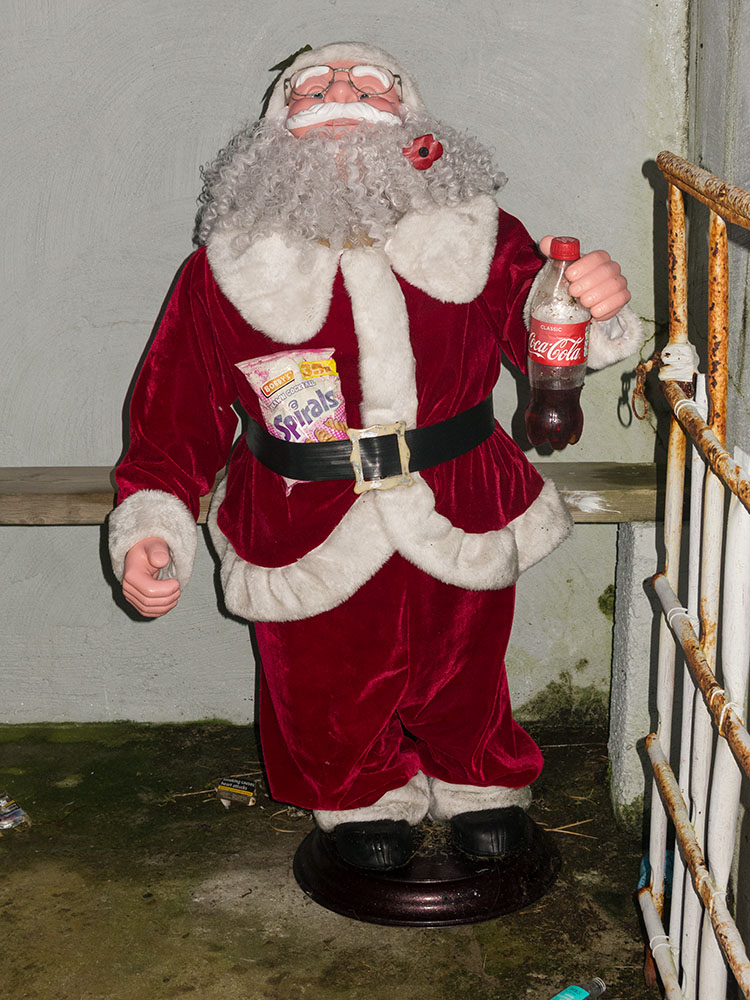 Yes, it’s a shame the photoshoot footage got the chop but I still had a great day working with Billy and all of the 7 Wonder crew. Best wishes to you all for xmas and the new year. Santa and myself will be tuned in, interested to see if all those hastily added celebs are up to scratch. If not, we’ve agreed we’ll both join the growing number of people in the Outer Hebrides who supposedly own black and white TV sets. If that doesn’t make any sense, check this article I wrote for Caught By The River. 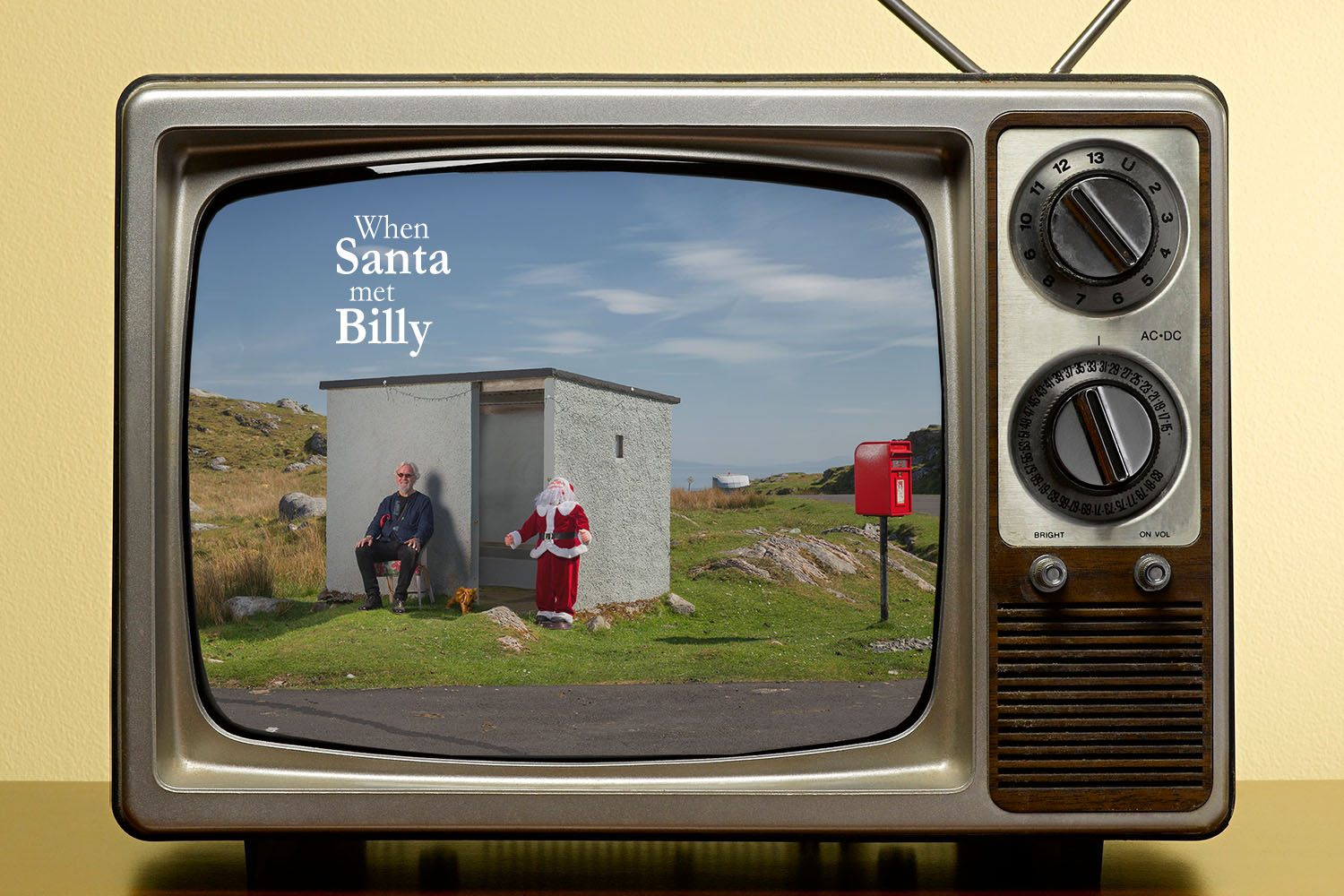 As Not Seen On TV

One thought on “When Santa Met Billy”