Presenting my latest photo project (this time it’s personal): a series of portraits featuring people who live and work in the Outer Hebrides.

It’s taken me a while to get the ball rolling – I first decided to do this two and a half years ago! It’s not an original idea. Celebrated American photographer Paul Strand visited the Outer Hebrides in 1954, capturing images of a community whose traditional way of life was about to be disrupted by a Cold War invasion of the US military. Two decades later, English photographer Gus Wylie started documenting islanders and their way of life. He continued to do so for the next 30 years. Wylie’s books ‘Hebridean Light’ and ‘The Hebrideans’ (both currently out of print) are classics. More recently, Ian Lawson published his epic collection of photographs centered around the production of Harris Tweed, From The Land Comes The Cloth.

I’m not going into this with the intention my photos will be ‘up there’ with the works of those mentioned above. My motivation is more along the lines of what led me to photograph abandoned croft houses, which also started as a personal project, then evolved into the Leaving Home/Nobody’s Home exhibitions and involvement with the Carnegie Trust etc. At this stage there’s nothing planned for this series of portraits beyond the aim of accumulating a collection of photos depicting ordinary people going about their daily business. Currently, the only outlet for this collection of images is via social media (facebook, twitter and instagram) and here on the blog. It’s very much a work in progress.

Going back to my motivation… the Outer Hebrides are most often presented to the outside world as a place of beautiful unspoilt beaches, turqouise blue waters, sea eagles, otters and mile after mile of uninhabited terrain etc. All of the above are part and parcel of the landscape, but the tourist brochure, theme park viewpoint glosses over the most important thing of all: the islands’ inhabitants.

On the rare occasion the media acknowledge the presence of people on the islands, more often than not they focus on weavers and crofters. That’s fair enough, because they make up a significant percentage of the population, but I want to focus on a more representative cross section of the workforce who help make this place tick. That includes the crofters and weavers, but also the shop assistants, council workers, waiters and waitresses, delivery drivers, fishermen, hospital workers, teachers etc. It’s about people doing ordinary things in an extraordinary place.

From a technical point of view, it took me a while to figure out how I’d like to approach this (lighting equipment, lenses etc). The goal is to capture the subject whilst also portraying their line of work.  From the outset I knew I wanted to use additional light. I feel it’s something that gives the images an extra lift and it’s become an integral part of my photographic style. I want the photos to look a little more special than a casual ‘point and shoot’.  I’ll come back later in the series with a technical description of how I lit particular images.

In the meantime, here are the first three pictures in the series: 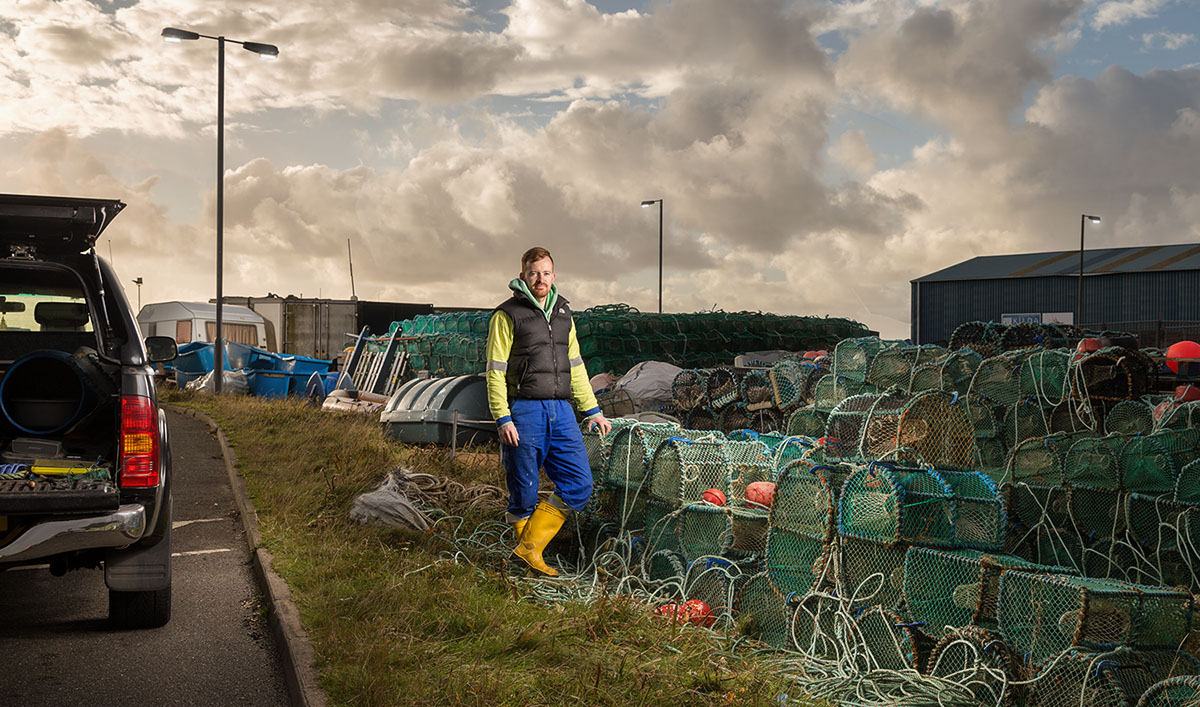 Neillie works five weeks on/five weeks off as a Second Officer and DPO (Dynamic Positioning Operator) aboard an offshore supply boat. When he’s back home in Harris, he’s often out at sea again, fishing for lobster and crab. Neillie’s also a crew member of the local retained fire brigade. I caught up with him while he was mending creels at Leverburgh Pier. 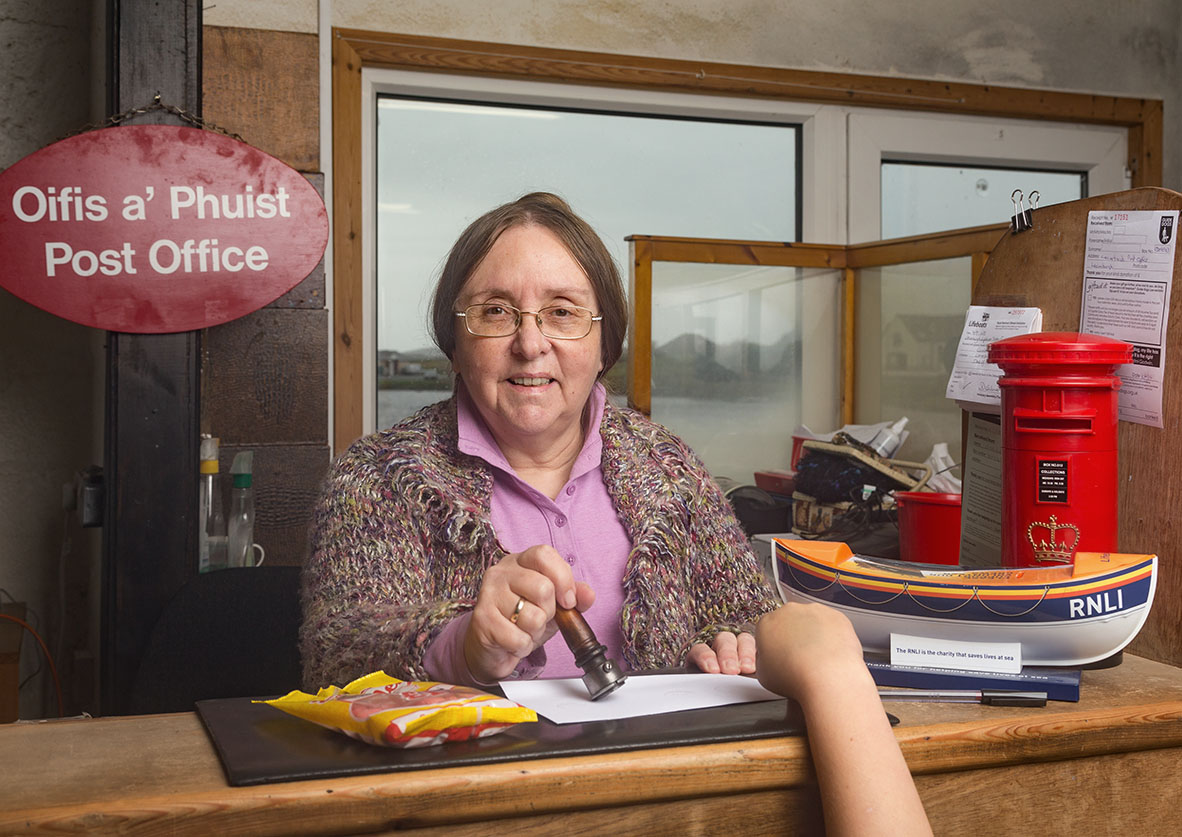 Diane worked behind the counter of Leverburgh Post Office & Cauldron Gift Shop from 1994 until its closure last month (September 2017). I called in to witness the shop’s last ever sale: a ‘One £Pounders’ bag of Cinnamon Creams. 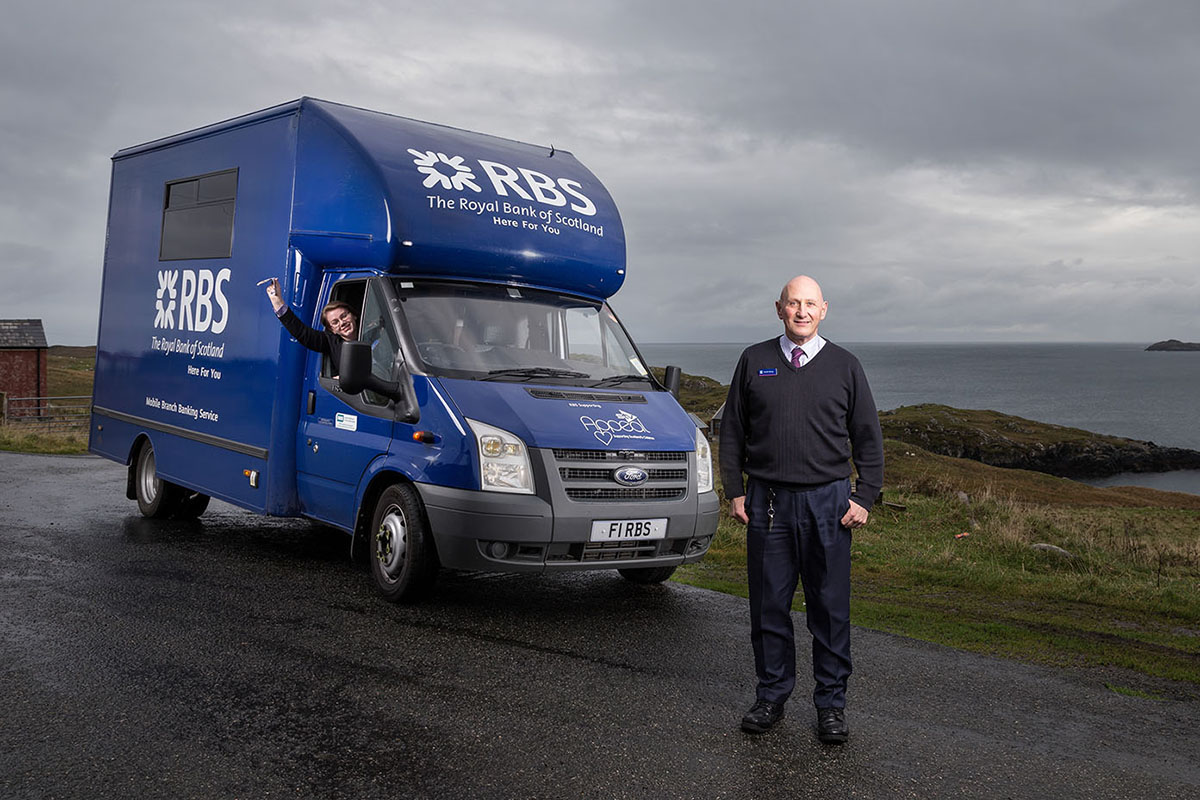 Roddy and Jessica work on the mobile bank. Every Tuesday they drive down to Harris from their Stornoway base. They’re on the lookout for the A4 dayglo pink signs their customers display when requiring their services. It’s the bank that comes to your door step! This particular Tuesday, I had a cheque to pay in. While I was on board I asked Jessica if she and Roddy could spare five minutes to pose for a photo. First time I’ve held up a bank!

Jessica told me they were getting a brand new mobile bank before the end of the year. They’re asking customers to choose a name for the new vehicle from a shortlist of three: Sandy, Tweedy or Smithy. It’s obvious where the Sandy and Tweedy names came from, but Smithy…? It’s in honour of Kenny Smith – the first ever driver of the Stornoway based ‘Travelling Bank’, and possibly the first mobile bank in the whole of the UK. The service began in late 1946 and Kenny continued until 1976, when he retired after 29 accident-free years. ‘Smithy’ got my vote*. Not only did I get to pay in my cheque, I got an education!

PS: that’s my cheque book Jessica’s waving in the air – I left it behind after getting distracted by the photo shoot and history lesson.

Some of Scotland’s previous mobile banks

*UPDATE: I picked a winner! When the customers’ votes were all in, the newly liveried mobile bank was christened ‘Smithy’.