A few weeks ago I was contacted by Jason Caddy of Green Leaf Design & Build. I first met Jay when he commissioned a photo shoot of the new guest lodge he and his team had built for Findhorn Ecovillage, in Moray, Scotland. That was back in November 2013. 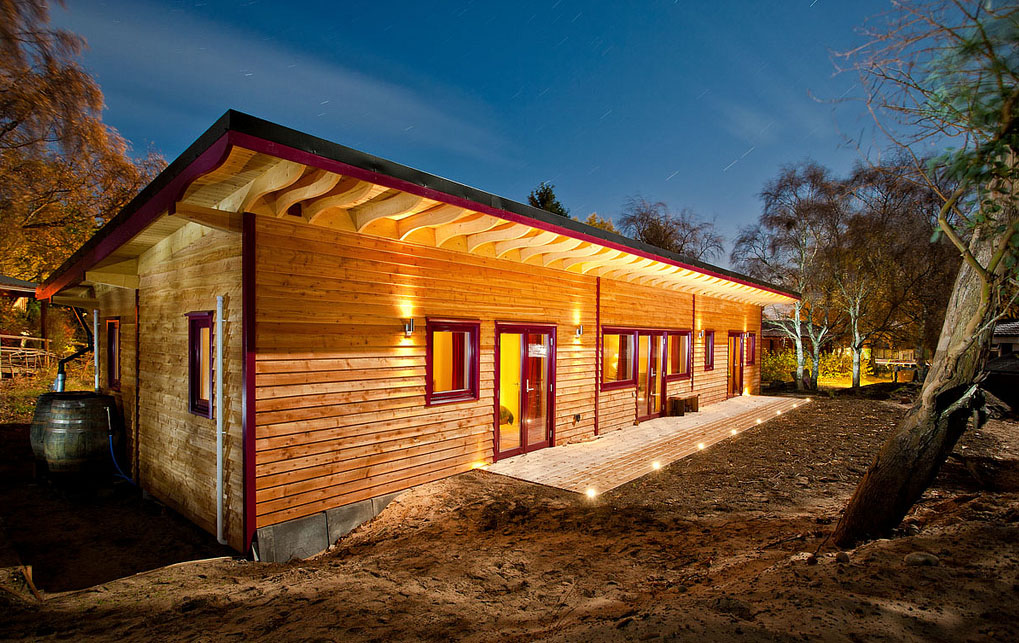 Jay and his team have been busy ever since. He wanted me to head back to Findhorn to photograph some of the buildings they’ve designed and built since my last visit, in particular the cluster of six one bed apartments they’d just completed on behalf of Park Ecovillage Trust (PET). PET represent the Findhorn Ecovillage and associated Community. Their stated aims are to make a real environmental difference and improve the lives of the growing Findhorn Community by

The block of one bed apartments featured in this post are part of that plan. Green Leaf Design & Build started work in May 2017. They delivered on time and on budget. The keys were handed over to the new tenants today (Dec 1st 2017). 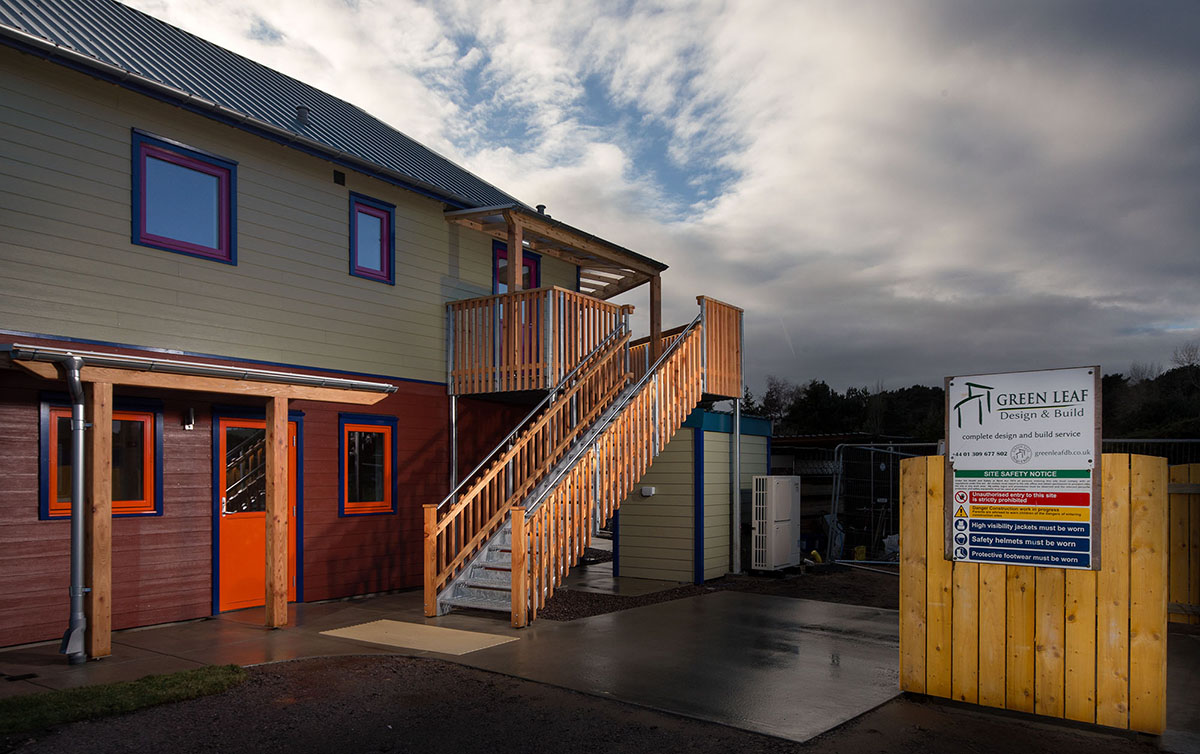 While I was on site I also took the opportunity to photograph some of the other buildings Green Leaf Design & Build have constructed since my last visit, including a row of six houses that were completed earlier this year. All are now fully occupied. These new homes are also part of PET’s Vision 25:25 project.

I was invited indoors to photograph some of the interiors: 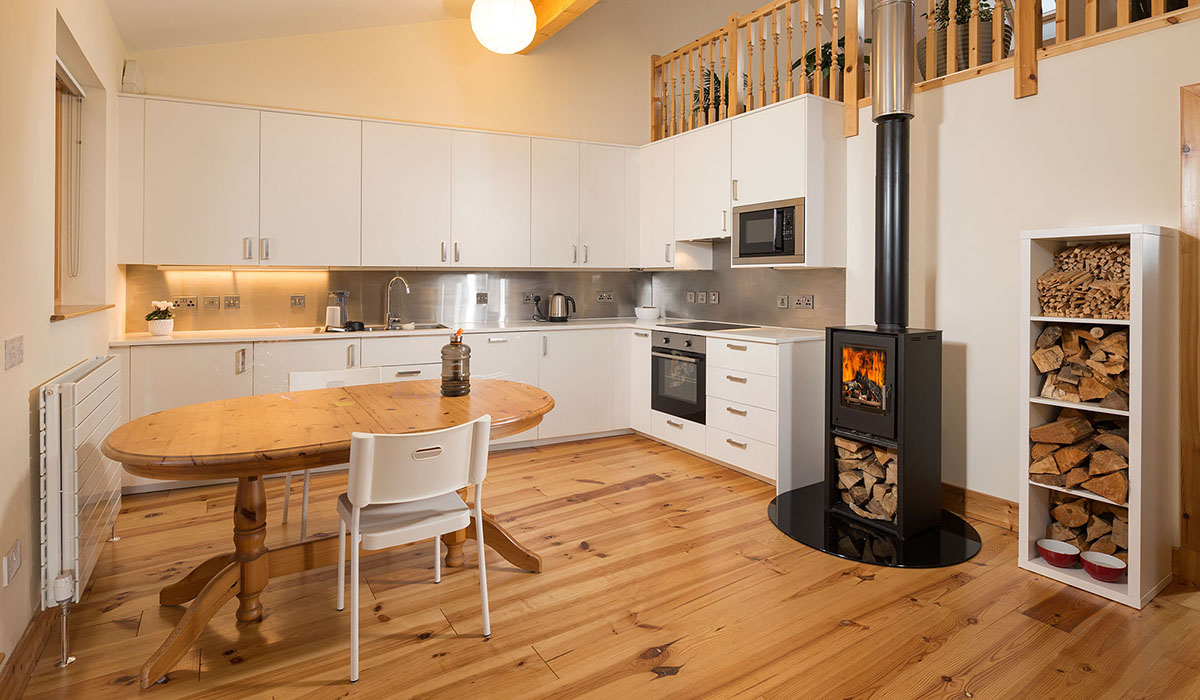 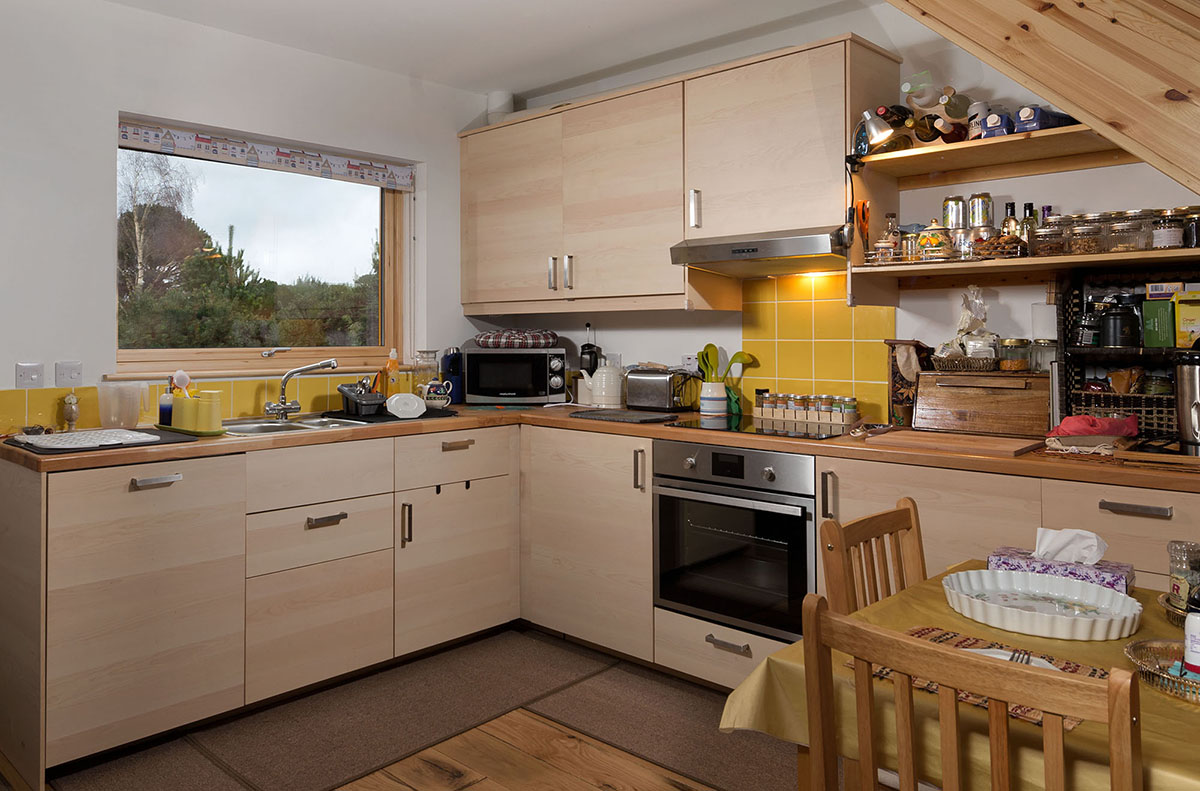 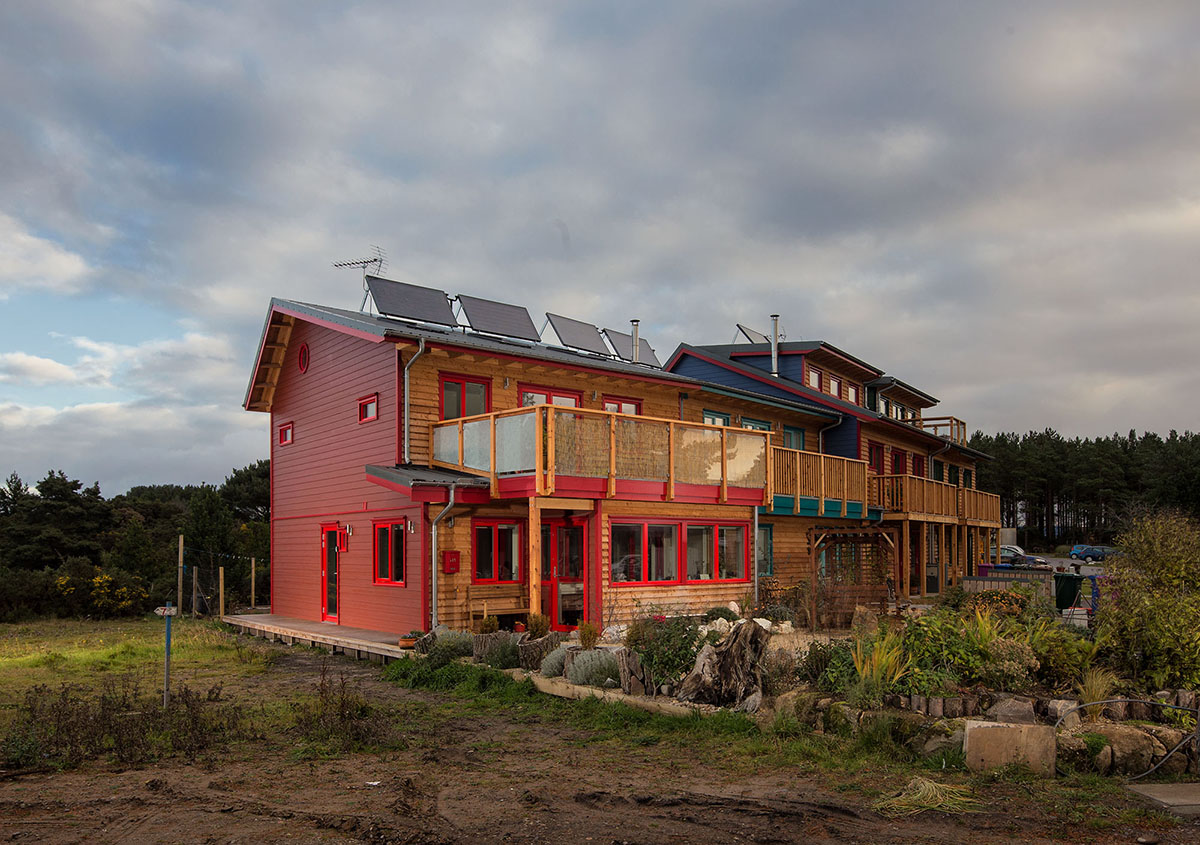 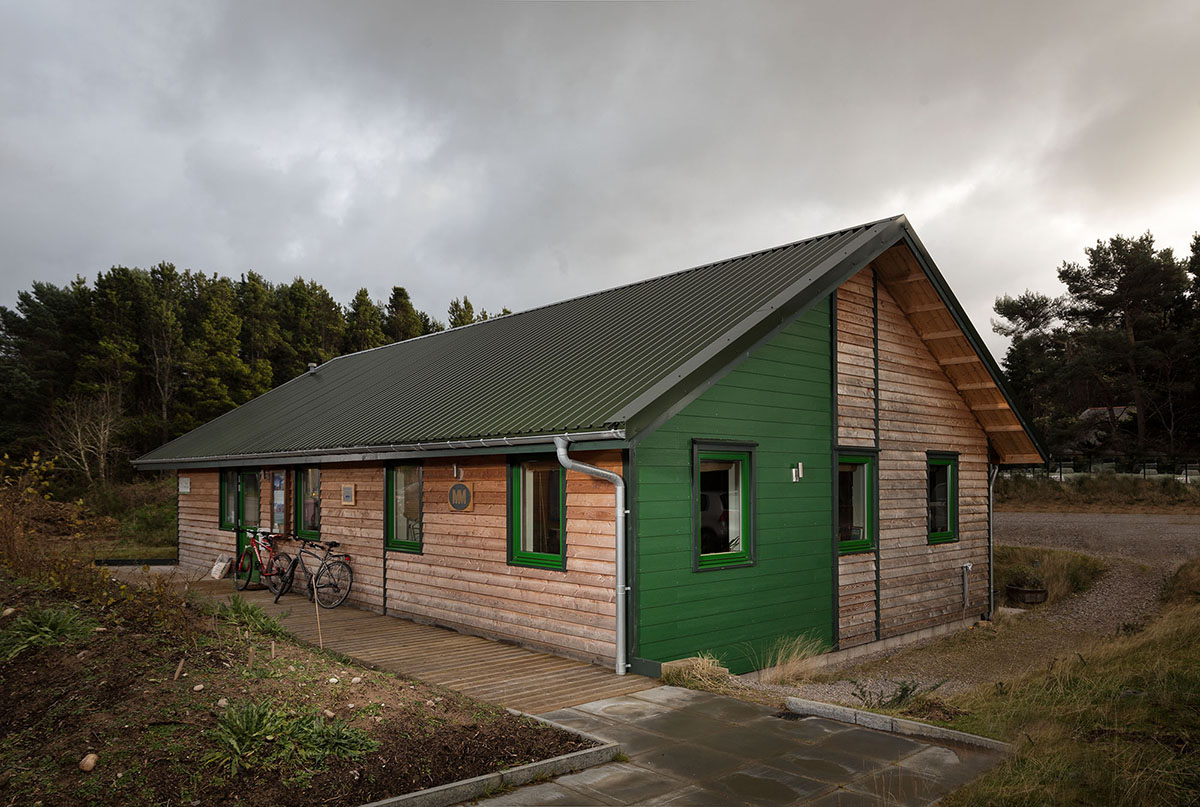 Trees for Life offices – another one by Green Leaf Design & Build 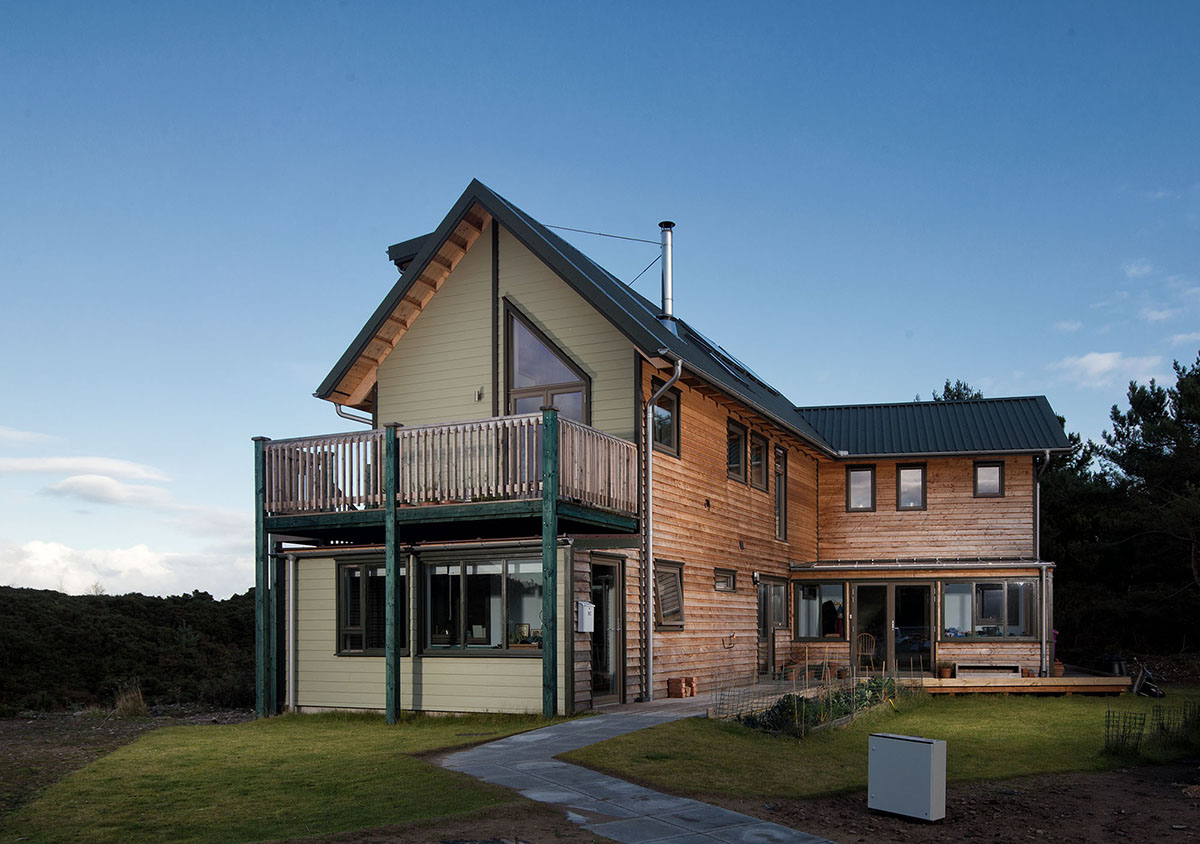 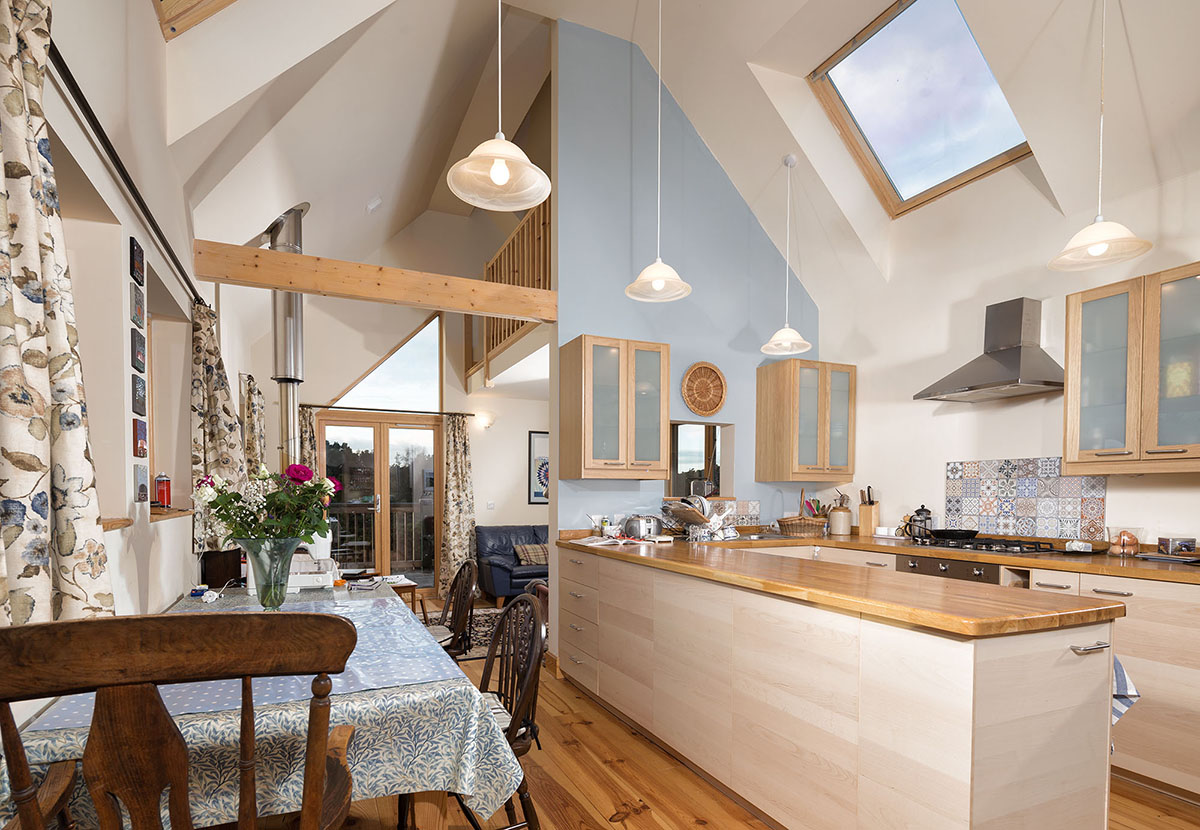 This photo shoot took place over several days. The image at the top of this post was taken on day one. I half-jokingly said to Jay that a cherry picker would be handy tool to get a better perspective on the new block of six apartments. He said: “We’ve got one!”.

Sure enough, their ground-works contractor had a cherry picker on site. When I turned up the next day, they’d set it up in front of the new apartments. I confessed my irrational fear of heights, but it had to be done. I climbed aboard and took the platform to a level I felt gave me a good perspective on the building. 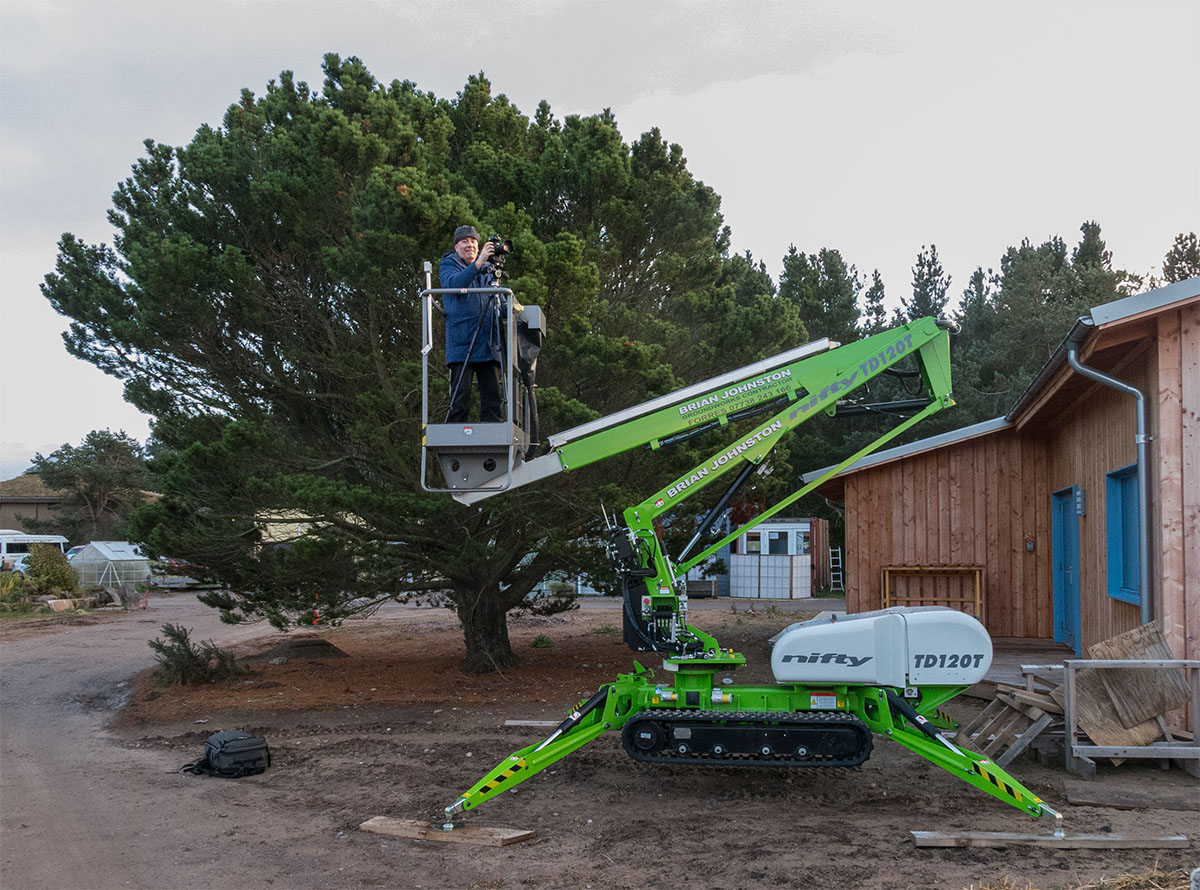 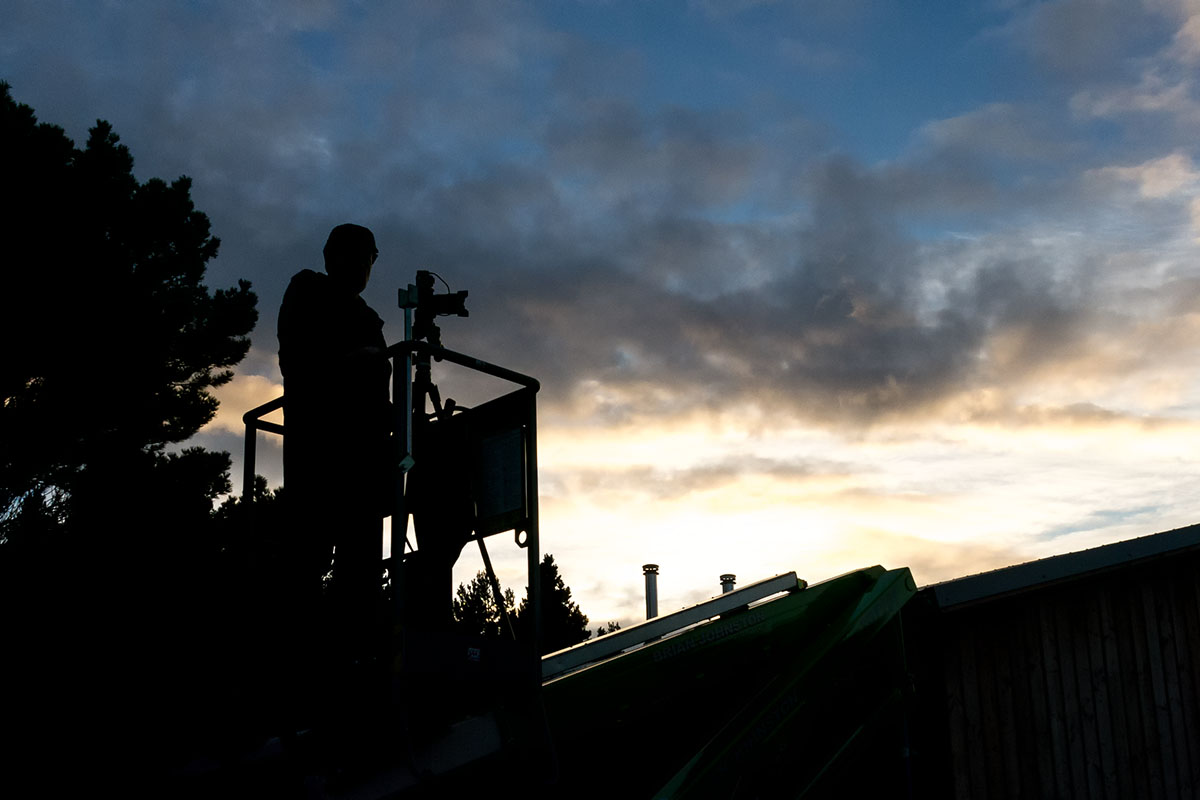 That’s me aboard the cherry picker. Thanks to Jay for the photo.

While I was on high, Jay took care of the lighting – aiming a portable 600 watt strobe at various angles on the building and the surrounding landscaped ground. I pieced together 24 separate exposures to produce the image below: 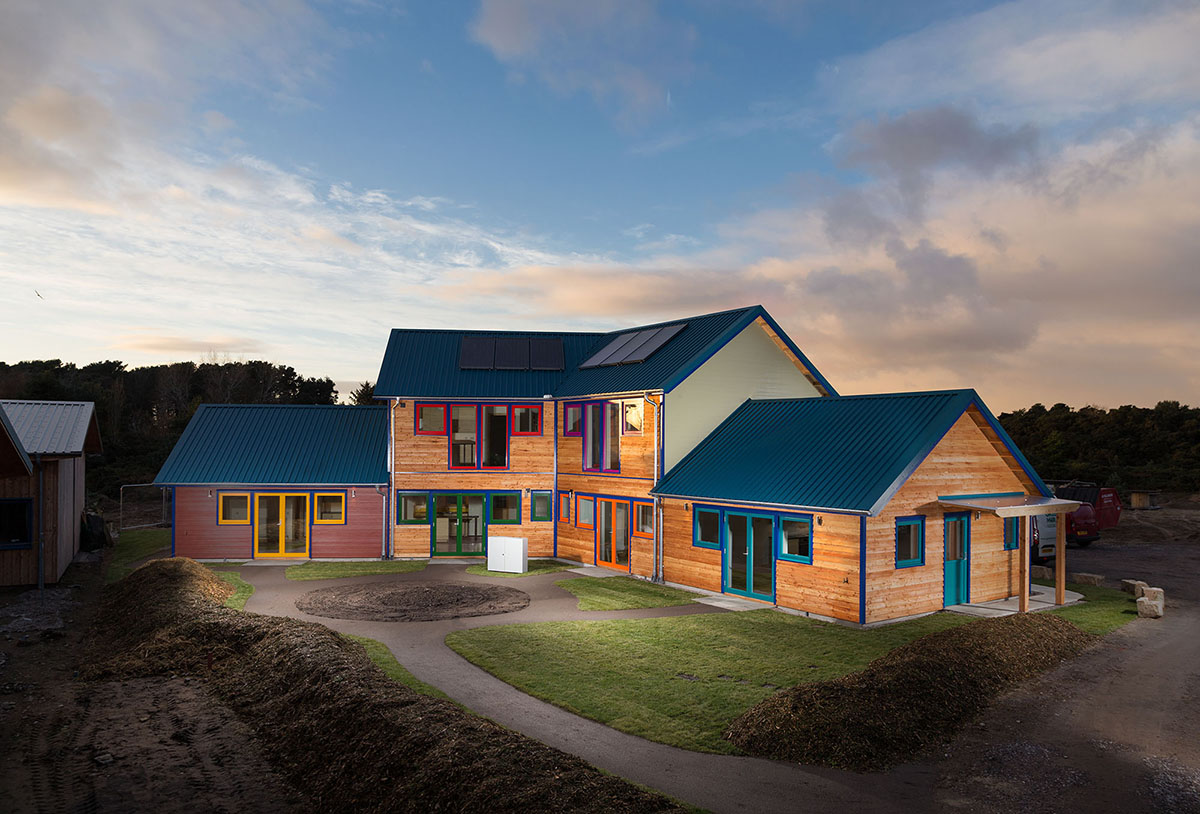 After my stint in the cherry picker, Jay wanted to try a max height shot. I said: “You’re welcome. You do the camera, I’ll take care of the lighting”.

He took the cherry picker as high as it would go, I ran around with the light. Here are four of the images (from a total of twelve) that were part of the final ‘high elevation’ shot: 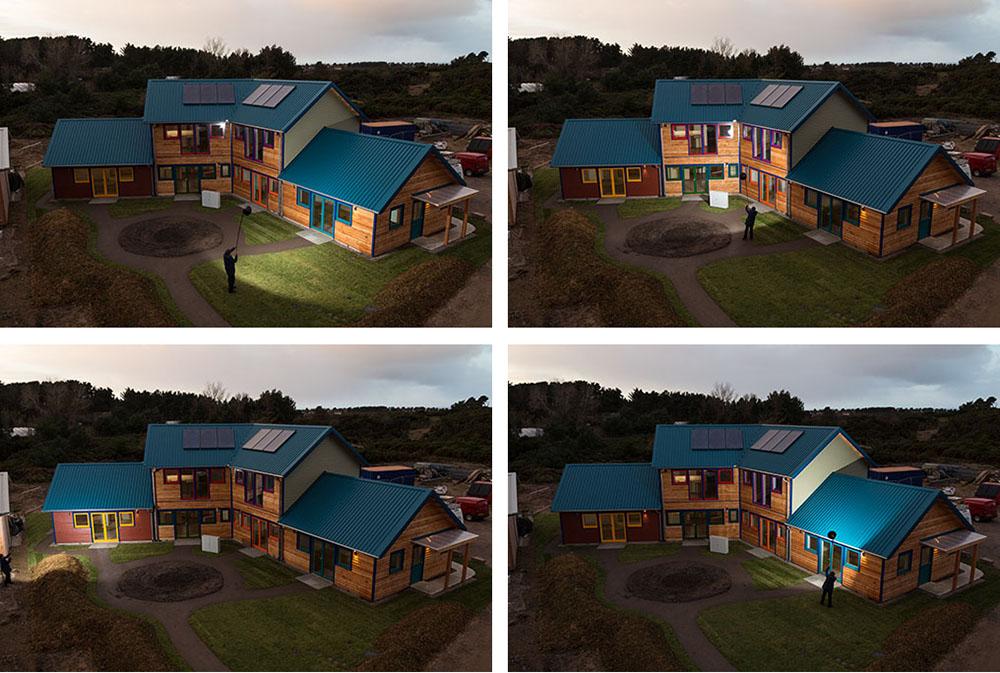 And the final result… 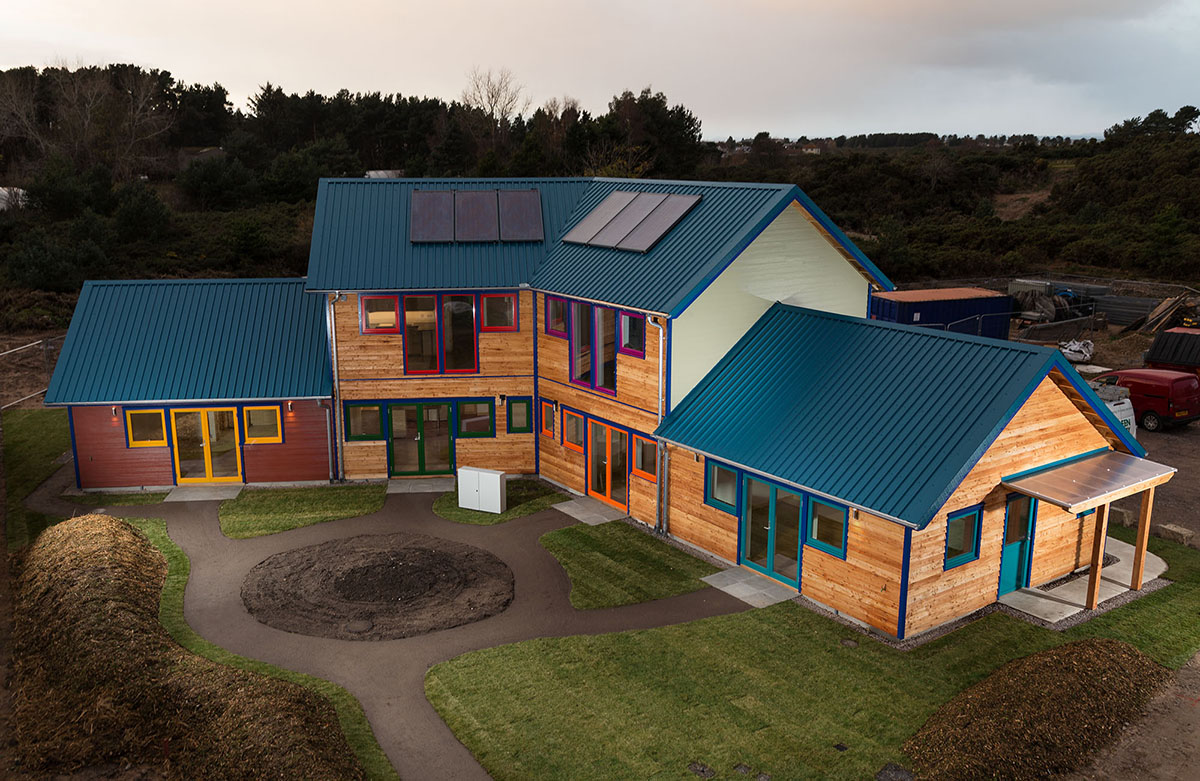