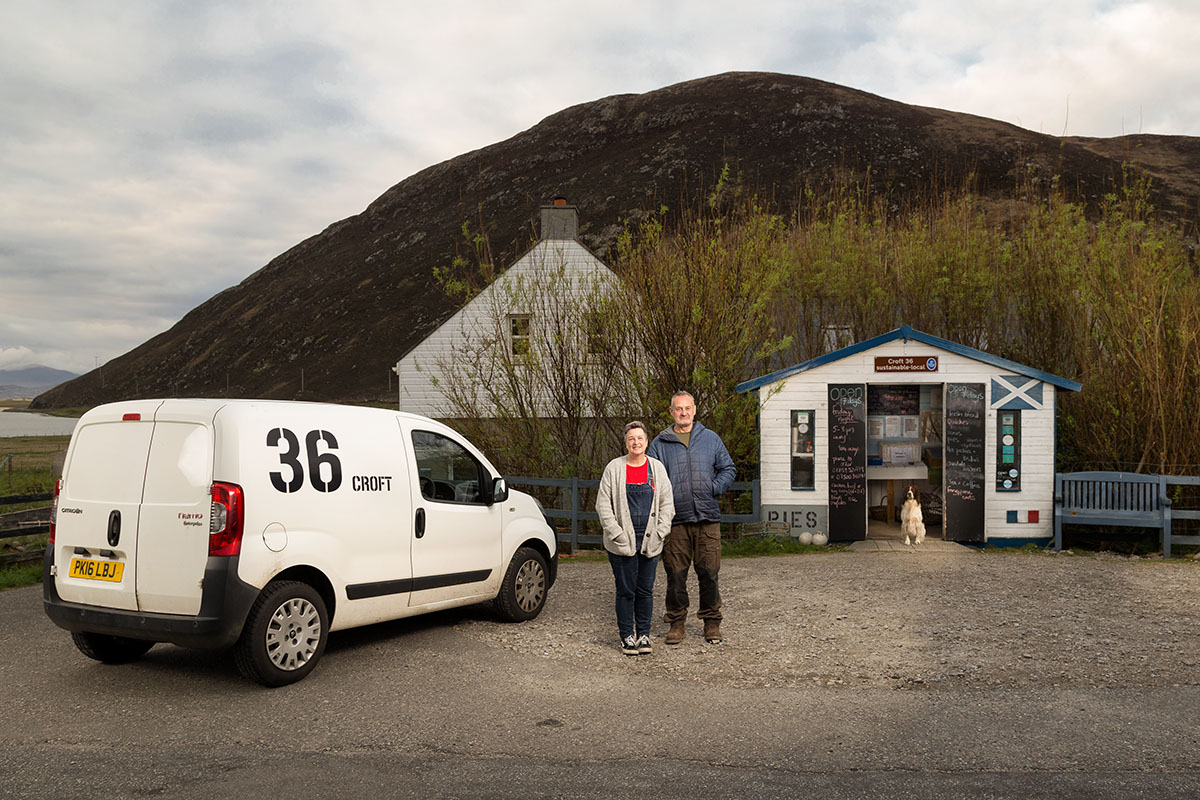 It’s been 20 years in the making, but Julie and Steve Olley are now running one of the most popular and “quirky” food establishments in the Outer Hebrides. A quick glance at some of the hundreds of 5 star reviews visitors have posted on tripadvisor will give you a flavour of what Croft 36 (Northton, Isle of Harris) is all about, and why so many people absolutely love it… 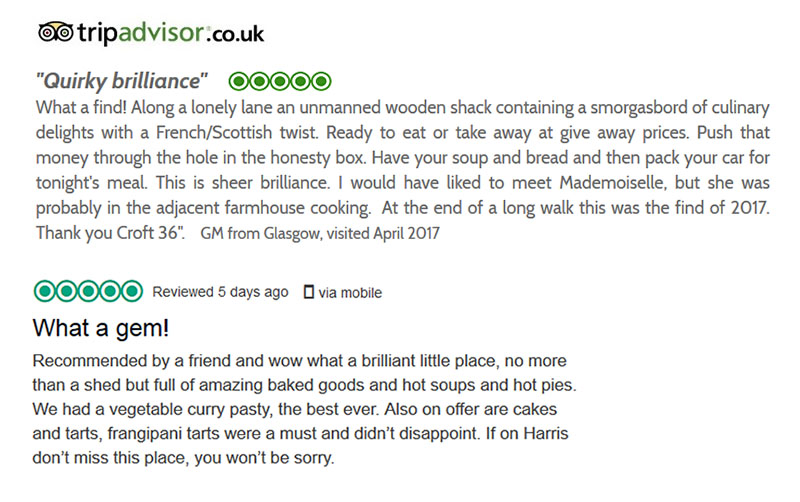 There are hundreds more rave reviews for Croft 36 on tripadvisor

Before setting off to Northton to photograph Julie and Steve outside their shop, I called ahead to make sure the little white Croft 36 van was also available for the shoot. The large Nascar style race car numbers were Steve’s idea – making the van look like a character from a Pixar movie when you see it travelling around the roads of Harris. It had to be in the shot!

Also, while setting up for the photo, their dog Gus was keen to get in on the act. Steve instructed him to sit calmly in the doorway of the little shop. What a good boy!

Take a peek inside:
(photos courtesy of Croft 36 website) 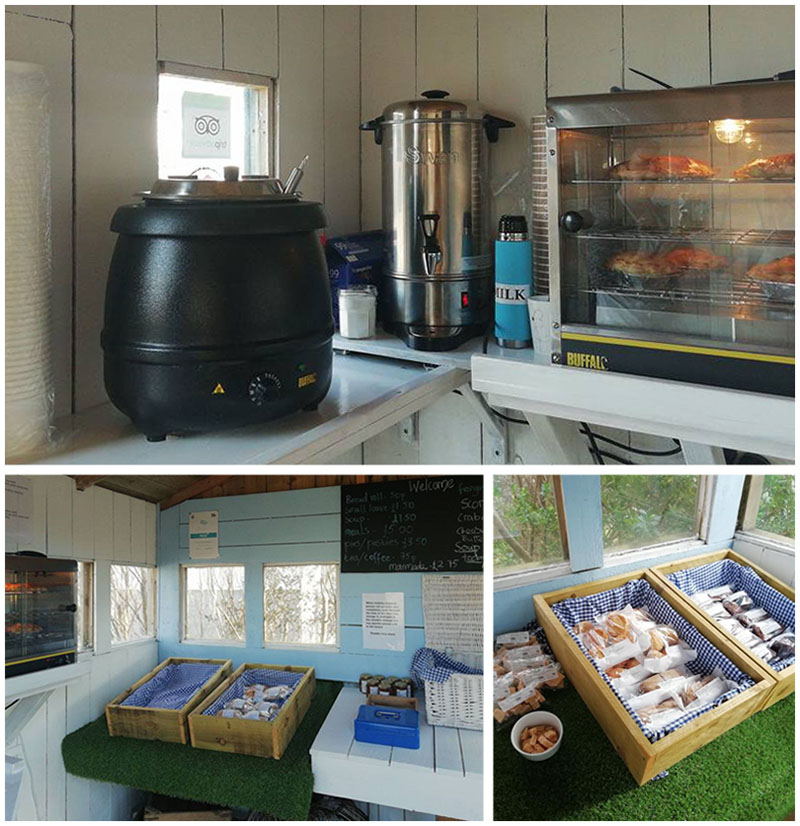 Before packing up my camera gear, I was about to scribble down a few notes to accompany this photo story; you know, the usual stuff.. when did you move to the island? How long has Croft 36 been in business? etc. etc. Instead, Steve offered to write up a brief history of Croft 36. Many thanks to Steve for allowing me to share his story here…

“Julie and I were at Bangor Uni, she doing French and me Agriculture. Julie having lived in France before, whilst I had worked in or studied agriculture/ land management most of my life. We had two children Jonny and Edith. On holiday in the Outer Hebrides in 1998 we were so taken with the Islands we made enquiries about finding somewhere to live and perhaps starting a horticultural business. Following a conversation with John Smith crofting officer we had a look at crofts, (never imagining a croft would be available) our attention was drawn to croft 36 Northton by our then neighbours, Morag and John Willy Mackinnon. The croft belonged to Sammy and Joey Morrison, Taylor Hill Leverburgh.

Negotiations with Sammy and Joey and a relatively small sum of money [borrowed] we became the proud owners of a croft complete with a ruined but beautiful stone house, which we intended to restore.

Two weeks before moving to the Islands our daughter Edith died in an accident.. a truly dreadful time.

We moved to Lewis and looked for a house to live in, to enable us to start work on the croft and house. Without money or work we moved to Strond into a rented house, we luckily found work, Julie in home care, hospitality and more care work, me in grass cutting, building, seafood processing, winkling and Mink trapping. Our daughter Etta was born. 2000.

I drained the croft and was able to plant vegetables of which we had a ready market including the just started Stornoway farmers market. Finlay was born 2002.

With financial assistance from the crofters grant and loan we were able to think about the house. The ruined house was condemned as unfit by the council, so I designed our dream house. Unable to get a mortgage due to fact that we were not in steady employment I decided to build the house myself (I had experience of bricklaying working in landscaping). The house eventually took 7 years to build. During this time we also had our youngest Ellen in 2003. I was once again employed a mink trapper which gave us capital but restricted the hours I was able to work on the house.

Moving into the house we eventually started a business (about 2011), delivering hot seafood based meals mostly to holiday cottages and tents. We also started selling dressed crabs from a small kiosk in our car park, this was quite successful and we added home baking including bread. We discovered that the kiosk was successful so decided to build the out of town shopping outlet shack which is still standing to this day.

Julie and I work together, she does the baking and I make the fillings, stews, curries etc.

Our eldest son Jonny now 29yrs old with a 9yr old daughter lives in Stornoway and makes creels, he left home before the house was finished.

Dedicated to the memory of Edith Olley

“I would like to thank all the peeps that have liked our potted history but would like to add that it sounds like I built the house single handed, I didnt! I had lots of help from friends and neighbours, most notably from Graham MacKinnon and the late but great Ron Stubbings. If not for them I would probably still be stuck on the roof.” 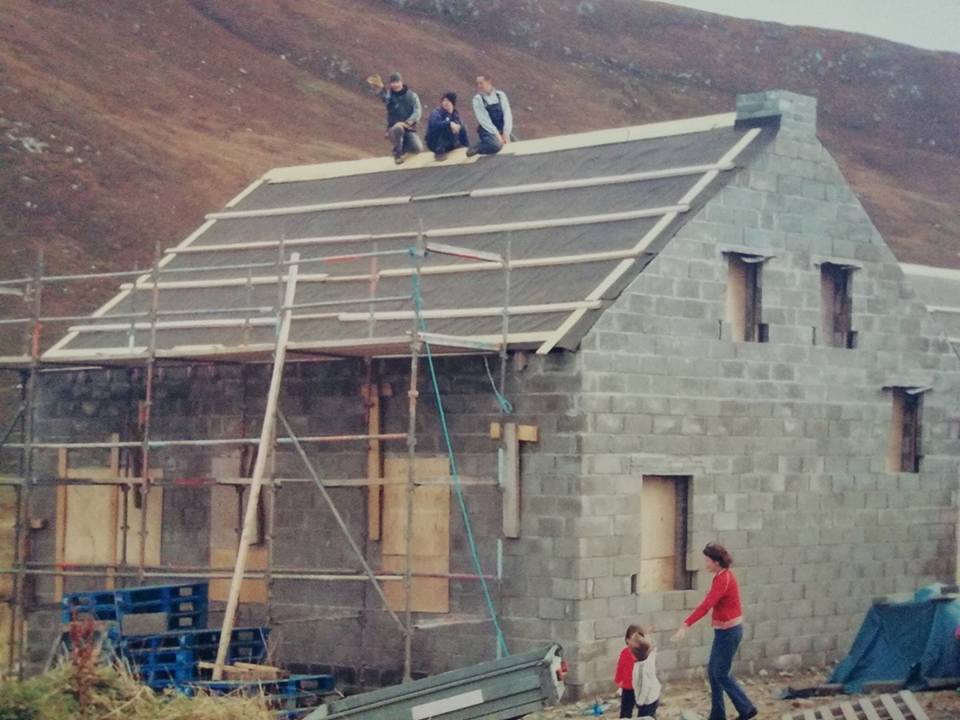 Steve and friends building the family home on Croft 36