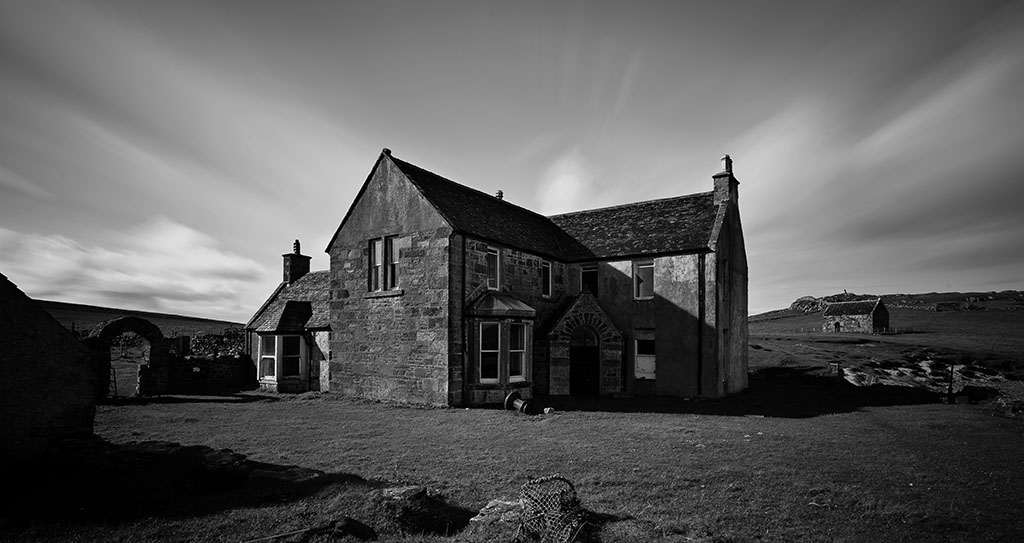 A brief history [nicked off the internet]: Ensay House dates from before 1805 (it appears in William Bald’s map of this date). Remodelled in the mid-19th century, the former tacksman’s house was described in the census of 1851 as “a gentleman’s seat” and by 1871 had 14 rooms with one or more windows. A visitor described the dining room walls as covered with “guns and rods, skulls and tusks…devoid of all ornament but the instruments and trophies of the chase “. The late medieval chapel to its east was restored as an Episcopal chapel in 1910. The chapel is part of the Episcopalian diocese of Argyll and the Isles, and requires an annual service in order to remain consecrated.

I was only on the island for a couple of hours so concentrated most of my efforts on the interior of the house…. 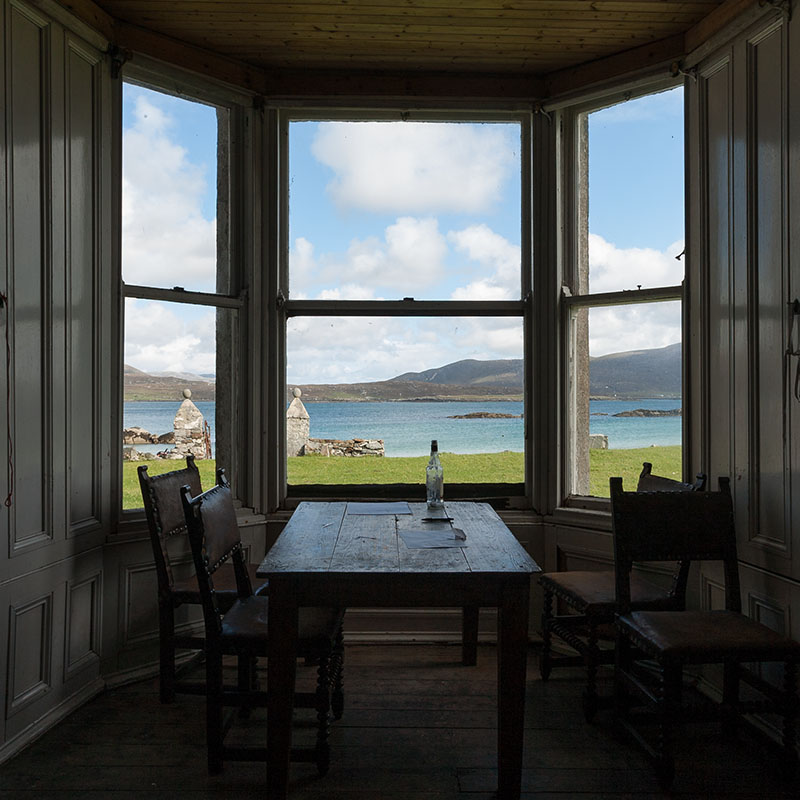 As you might expect, a house of this age that spends much of its time unoccupied shows signs of deterioration. Mix in some ancient artefacts, the stunning location and childhood memories of those who spent summer months on the island and you have the perfect location for an interesting photoshoot. 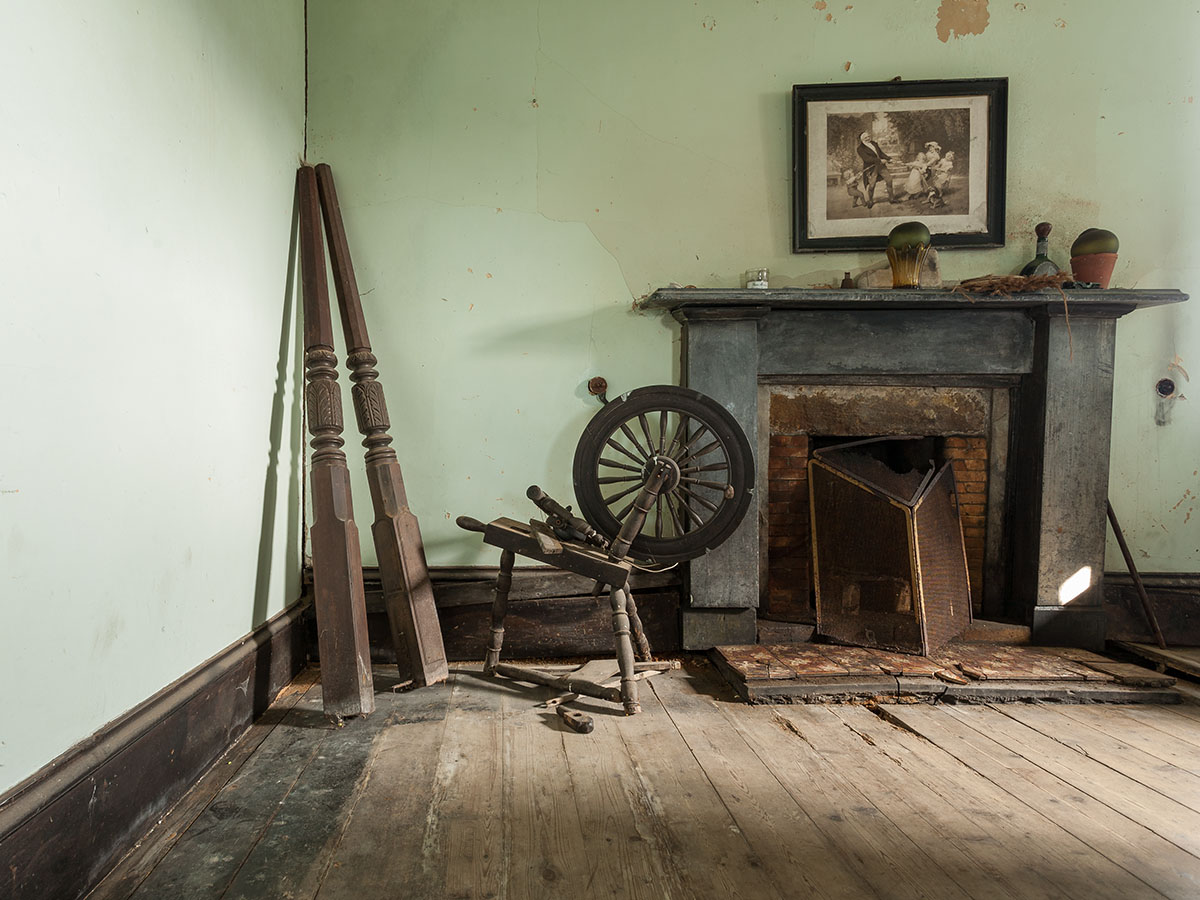 The old spinning wheel was in the second largest downstairs room. Apparently the two sisters who lived in the house during the early part of the 20th century would migrate from room to room as the day progressed, following the warmth of the sun.

“The bull went mad one day, starting charging at everyone – they had to shoot it”. Bully now spends his days peering down on everyone who enters, as well as terrifying the wee children who had to use the tin potty on the landing when the urge to ‘go’ during the middle of the night got the better of them.

The servants’ quarters were at the back of the house, the main hub of activity being the kitchen. My thanks to Heather Mackenzie for sharing some of her childhood memories of her times spent in this room during the lambing season, when she visited the island with her parents and grand parents: “Sat at the table, doing our maths schoolwork with a bag full of little counting blocks listening to Atlantic 252 – dogs asleep under the table – and a lamb in or alongside the stove trying to get heat to stay alive!” 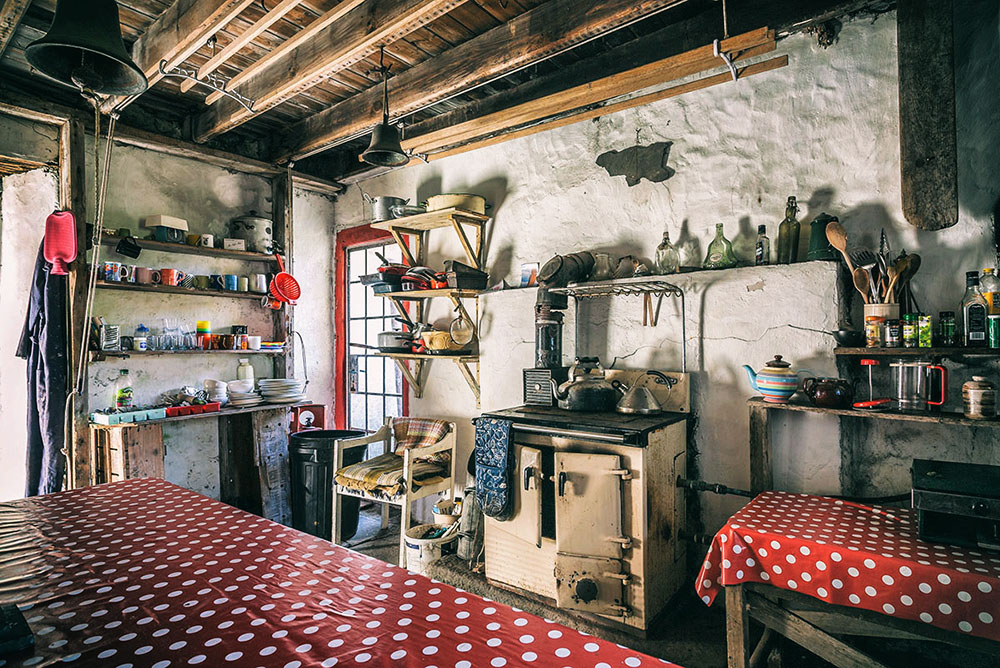 There are two sets of stairs. The narrower, darker stairway was presumably for the servants. When Heather and her friends stayed in the house, they were discouraged from using this stairwell by their parents. They were told the rats who lived under the stairs would drag them through the gaps into the darkness below!! At the top of the main stairway a stag’s head, dated 1919, hangs on the wall.

The main bedroom has a four poster bed and like many of the other rooms in the house there are sections of plaster that have fallen from the ceilngs and walls, exposing the timber lath beneath. At some stage an old wooden door has been placed across the top of the four post frame to protect the occupants’ heads.

Further along the corridor are a couple of smaller bedrooms overlooking the older chapel. Spot the bell pull for summoning the servants on the wall in each room.

A closer view of Ensay Chapel

And to finish off, a view from the beach in front of Ensay House, looking across the Sound towards Northton, Leverburgh, Strond and the hills of Harris: