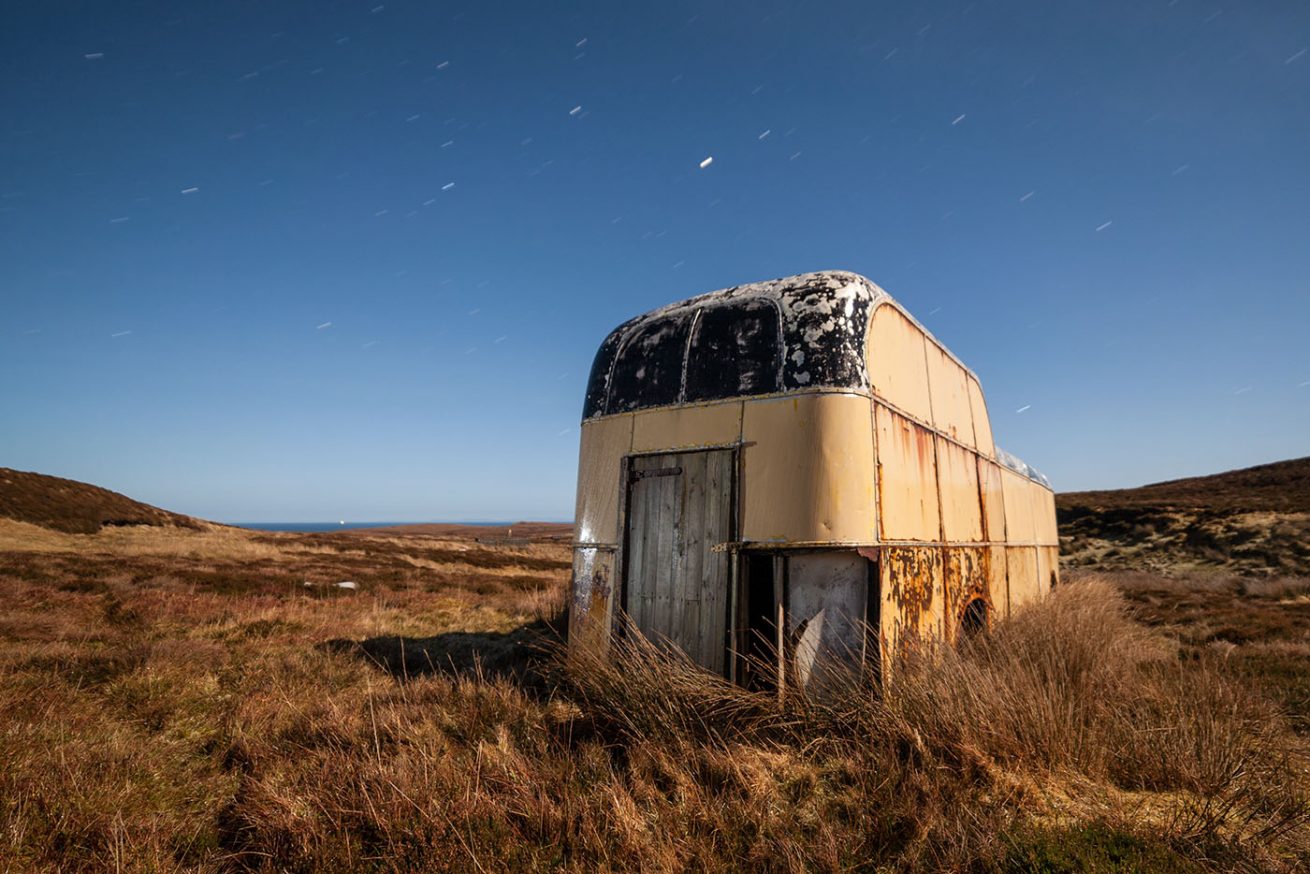 This strange contraption is living out the remainder of its days in the middle of a peat bog on the Isle of Lewis. I stumbled across it (almost literally), in February 2011 during a full moon night photography trek to the shielings of Cuishader. When bad weather cut my outing short, depriving me of a decent shot of this weird vehicle, I knew I’d have to return to complete unfinished business. In the meantime I dug up a little of the history behind the bus that was parked in the middle of nowhere.

Several people contacted me after I posted my first batch of Cuishader photos in Feb 2011, sharing their knowledge and experiences of this vehicle while it was plying its trade around the roads of Lewis. Piecing together various snippets of info, I’ve compiled what amounts to an abbreviated history of Jimmy Bullar’s Tea Hut. There may be a few errors in my story and no doubt there are many gaps to fill but it’s entertaining nonetheless….

Jimmy Bullar’s Tea Hut started life in the Outer Hebrides as a British European Airways passenger bus, operating between the centre of Stornoway and the island’s airport. It was one of approximately 300 Commer Commando Observation Coaches – often referred to as ‘half-deckers’ – built in 1947. This particular model was supplied to British European Airways (BEA) and was used to transport air passengers from the BEA office in Stornoway town centre to the airport, a couple of miles out of town. Courtesy of the good folks on Sy Cove here’s a photo of the very same bus parked outside the BEA office on Cromwell Street (now the HS1 cafe bar) in the early 1950s.

My neighbour remembers travelling on the bus between BEA’s Cromwell Street office and Stornoway airport in the 1950s and ’60s. The BEA office effectively served as a departure lounge, due to the airport itself consisting of nothing more than a runway and a few ramshackle RAF buildings dating from WW2.

Thanks again to the  people on Sy Cove for coming up with this photo from 1953. It shows the BEA half-decker at Stornoway airport. The two bi-planes had just returned from rescuing survivors of the sunken Hildena trawler.

When the bus retired from airport duty, it was put into service as a mobile shop, operated by Kenny Maclennan. At some point in the 1960s it was acquired by Kenny’s brother, Jimmy ‘Bullar’ Maclennan, proprietor of Stornoway Builders Ltd. It was used as a mobile canteen and accommodation unit for the firm’s employees, hence the ‘Tea Hut’ designation. Either before or during this time, it appears the engine ceased to function. Shortly afterwards the vehicle was converted into a trailer by extending the bodywork over the original engine compartment. It was towed from one building site to another by one of Jimmy’s trucks, serving as a canteen and sleeping quarters for the firm’s labourers.

I was sent this picture of the converted bus by Murdo Morrison:

As a child he remembers spending a summer holiday in the early 1970s at Horgabost in Harris – his father worked for Jimmy at the time and was loaned the converted bus for the family holiday.

In addition to operating Stornoway Builders Ltd, entrepreneur Jimmy, owner of the island’s first Rolls Royce,  built ‘The Acres’ hotel (now the Caladh Inn) in Stornoway in 1968. He managed to infuriate local Free Presbyterian Ministers by selling alcohol on the Sabbath. The Wee Free powers that be, used their not inconsiderable influence to bring the enterprising businessman down.

The hooded crows had their day, with the hotel being put up for sale in 1972. Meanwhile Jimmy’s building firm called in the receivers. In a separate incident in 1976, his house in Smith Avenue, Stornoway, was completely destroyed in a gas explosion. Dramatic times!

Following the collapse of Stornoway Builders Ltd, the ‘tea hut’ found a new owner and was ultimately transported to Cuishader, where it became a static home from home for some of the part-time peat cutters of Ness. 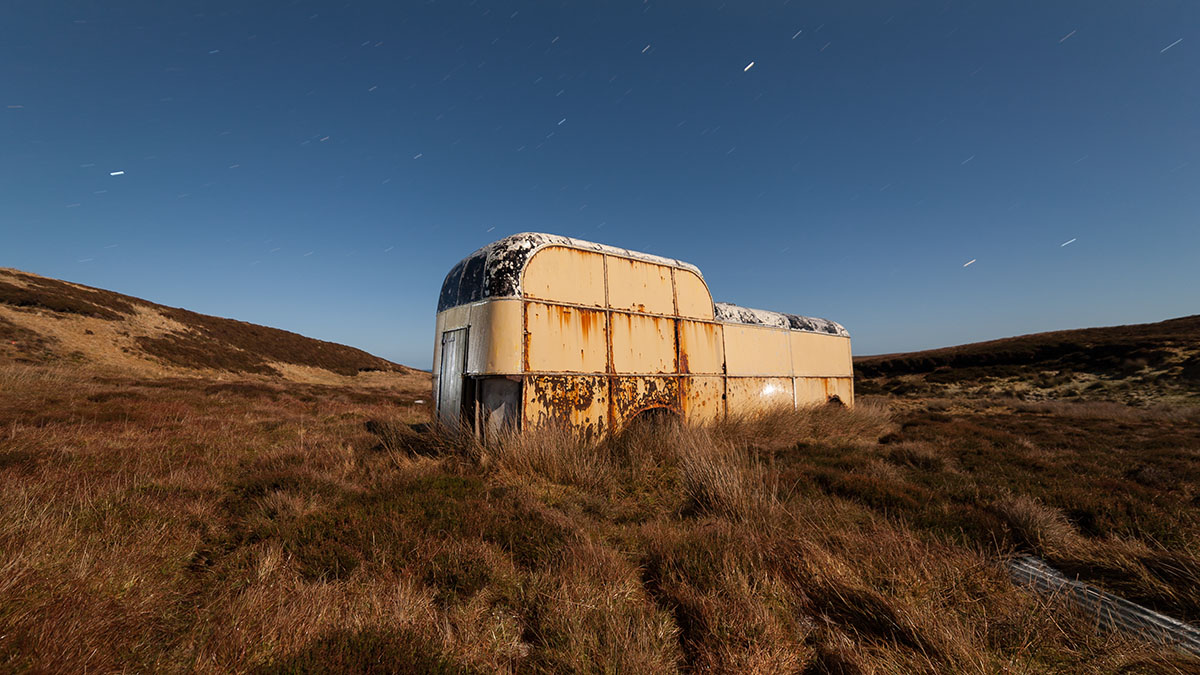 Above: another pic of Jimmy Bullar’s tea hut from my visit in February 2012

If further proof were needed of my fascination with this bus, here’s an image I put together to show how the bus was transformed from BEA passenger vehicle into builders’ tea hut. The roof-line was extended forward of the door pillars, boxing off the entire engine compartment flush with the front of the vehicle. Quite a skilled piece of sheet  metal fabrication, apparently carried out by one of the vehicle workshops in Stornoway.

A perfect example of islander ingenuity… from airport passenger transporter, to mobile shop, to builders’ mobile accommodation and tea room. Sixty five years after it first left the Commer factory in Luton, this slice of Hebridean history is seeing out its final days in the middle of a peat bog in Lewis…. or is it? 😉

Thanks to Iain Macleod for his help with the background to this story and also to the many people on Sy Cove for sharing their memories and photos.