On the road again? 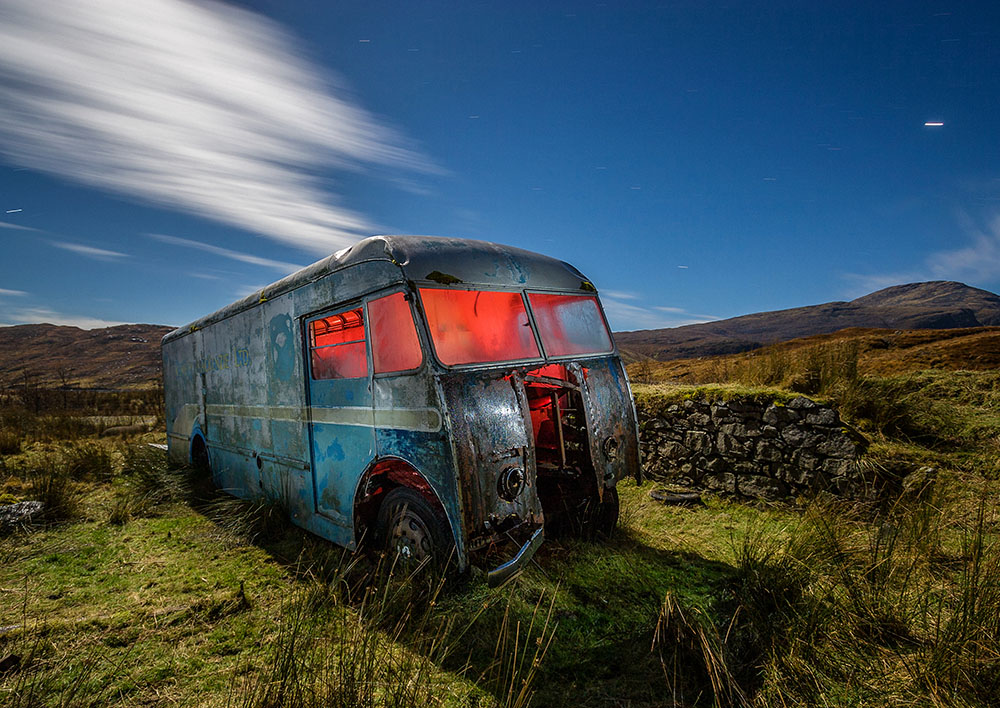 ON THE ROAD AGAIN?

Another piece of Hebridean history disappeared from view recently. Unlike some of the decaying subjects I’ve shot that are no longer with us, this one could be set to reappear. This 1957 aluminium bodied Albion truck was ordered by Kenneth Mackenzie Ltd of Stornoway, the islands’ largest Harris Tweed mill. It was delivered to the Isle of Lewis in 1957. A photo of it being winched off the ferry ‘Loch Seaforth’ made the front page of the Stornoway Gazette.

In 1970 the truck was taken off the road and parked near Ardvourlie in Harris, where it remained for the next 42 years. On May 18th 2012, the Western Isles Transport Preservation Group (WITPG), collected DJS 725 from its Isle of Harris resting place and transported it to their premises in Stornoway, where they plan to carry out a full restoration. More of the vehicle’s history here: Restoration plans for 50-year-old mill van

May 2012: a similar scene to the one above.  55 years later DJS 725 heads back to Stornoway for restoration

I first photographed the truck in April 2010. Despite the fact the truck had been sat by the roadside since 1970, the aluminium bodywork was still in reasonably good condition. Although much of the paintwork had faded considerably, the distinctive racing style graphics and “Kenneth Mackenzie Ltd” logos were still legible.

Around this time, Yorkshire buffoon Brian Haggas was a looming presence on the Harris Tweed scene. In December 2006, Haggas bought Kenneth Mackenzie Ltd, which at the time accounted for around 95 per cent of Harris Tweed production. In a controversial move he reduced the existing range of more than eight thousand individual Harris Tweed designs to a grand total of….. wait for it…… FOUR! He refused to sell the cloth to outside designers and limited production to off the peg men’s sports jackets, which like the man himself, are of  a spectacularly dated and uninspiring design. In May 2008, Haggas announced the redundancy of thirty six mill workers in Stornoway.

When I got home and checked out my truck photo on the computer, it resembled a scene from a low budget slasher movie. For some reason, the title ‘Who Killed Harris Tweed?’ came to mind. The truck being a symbol of the good times the industry had seen; the bloodbath imagery representing Haggas’s piss poor attempts to push it in a different direction.

Fortunately, Haggas’s efforts have had an unexpected but interesting side effect. Once dormant mills were kicked back into life to satisfy demand for the vibrant and colourful tweeds that were no longer available as a result of restricting the Kenneth Mackenzie mill output to the manufacture of Haggas’s unwanted sports jackets.

Seven months after I took the bloodbath pic, I revisited the Harris Tweed Truck on a clear November night and got a new improved photo of the old Albion. The tweed situation has also improved. Two years on from my ‘Who Killed Harris Tweed?’ photo, Haggas has a warehouse full of unsold Harris Tweed jackets. The Kenneth Mackenzie mill is in operation but at a much reduced level. However, the independent mills are thriving, with demand for their huge variety of designs running high.

In 2009, BBC4 aired a four part series about Harris Tweed, covering the situation at the time with Brian Haggas. I couldn’t find any youtube links to the programmes but there’s an excellent post on The Croft blog regarding the media’s smart-arse approach to covering an important island topic.

Photo credits:  thanks to Ronnie Cameron, Kenny MacAskill and WITPG for the b/w and recovery truck pics. No idea who shot Haggas.

PS… shortly after acquiring the Mackenzie tweed mill, Haggas commissioned a £1m Harris Tweed promo film. I found this shortened version on youtube. The director’s cut features a cameo by the great man himself. Share the link if you have it. WARNING: contains sickly sweet, sentimental  scenes shot through bottle bottom rose-tinted spectacles, accompanied by equally slushy soundtrack. May induce vomiting in those of a realistic disposition.

**[UPDATE (2014): since I first posted this piece, the Kenneth Mackenzie mill has closed for good. In 2009 Brian Haggas served redundancy notices on the 13 remaining members of staff – down from the 85 who worked there when he purchased the mill in December 2006. The whereabouts of his 70,000 unsold Harris Tweed jackets is unknown.]

**[UPDATE (2017): HARRIS TWEED TRUCK PRINTS are available in the online shop (limited edition of 70,000):
Prints only or framed and ready to hang

One thought on “On the road again?”