As Seen On TV 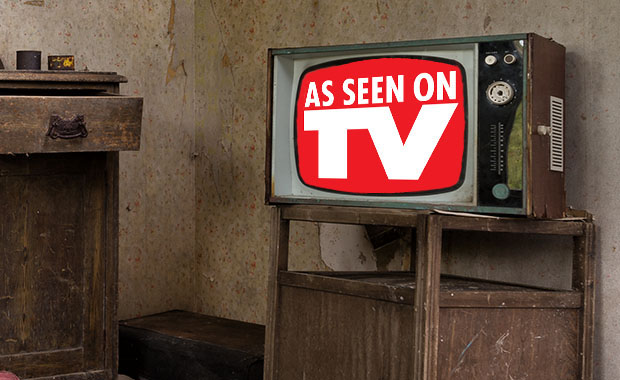 AS SEEN ON TV…

The knock-on effect of the Leaving Home exhibition continues… in recent months I’ve appeared on three BBC TV programmes, revisiting some of the houses I’ve been photographing over the past five years.

2. Landward
Landward is BBC Scotland’s equivalent of Countryfile. Series producer, Simon Cousins, contacted me shortly after Paul Murton first arranged the Grand Tours piece.  One of the programmes in the new series was going to be filmed entirely on the Uists. Simon asked if I could take them to one of the houses I’d photographed. The first that came to mind was an abandoned home near Lochmaddy, North Uist. I’d visited it twice before; first in 2012 with my DSLR and then again in 2013 to reshoot the main room with my large format film camera, which resulted in a 79″ x 48″ print of the image below…

Things didn’t quite go as originally planned. On the appointed day, I caught the early morning ferry from Leverburgh, arriving in Berneray an hour later. I’d arranged to meet up with Landward crew at the art gallery Taigh Chearsabagh in Lochmaddy at 11am, by which time producer Simon Cousins and cameraman Colin Maclure would have collected presenter Dougie Vipond from Benbecula airport. Dougie was flying in from Glasgow, touching down at Stornoway, before continuing to Benbecula. His flight left Glasgow on time but when it got to Stornoway, thick fog prevented it landing. The plane circled over Lewis several times, before giving up and heading back to Glasgow. Dougie was going to be a no-show.

However, the show must go on, so the programme’s producer, Simon, said we’d go ahead with the piece; he’d pose the questions and they’d dub Dougie in later. We drove to the house, which is situated approx 1/4 mile from the main road. First thing I noticed when we parked up… the roof was missing! We made the trek anyway. As we got closer, it became clear it had suffered some major damage since my previous visit in the summer of 2013. Slates and roof timbers were scattered all over the place. I entered the house and tried accessing the Green Room. I managed to open the door just enough to peer in. The ceiling had completely collapsed. Everything you can see in the photo above; the sheep carcass, upturned table, and the stove was buried under wood panelling, roof timbers and slates. Amazingly, the mirror was still hanging on the wall, totally intact.

Instead of the story being a TV recreation of my photo, it became something else. It illustrated the importance of documenting locations like this before they disappear completely.

There’s been quite a response as a result of the Landward piece, especially when it was aired in England. As a result I’ve sold many prints and have a few magazine features lined up. The power of TV!

3. Tighean Sinc (Tin Houses)
Series 6, Episode 1 of Trusadh for BBC Alba. A documentary about the proliferation of corrugated tin houses in the highlands and further afield. Trusadh researcher Shona MacLellan contacted me, asking if I could recommend a suitable house in Lewis or Harris. I suggested my favourite tin house, the one in Scalpay with the black and white TV set: 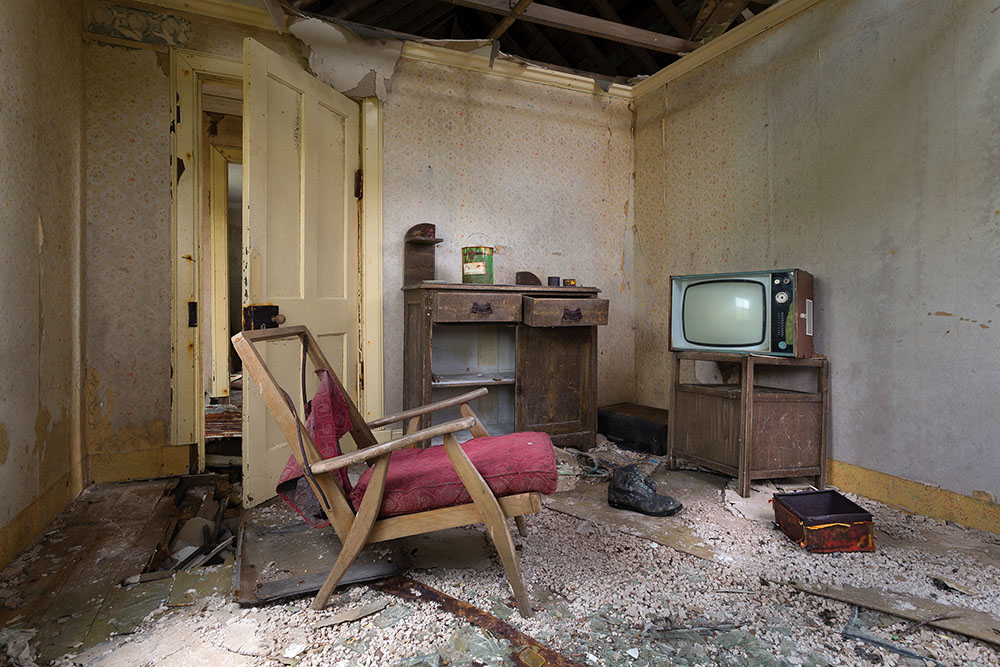 This house was one of the first locations I used my large format Sinar Norma camera. A 1960s plate camera, shooting 5″ x 4″ colour film. It was from one of those negatives I produced a 50″ x 40″ print that appeared in the Leaving Home exhibition:

There’s an odd story to tell about the TV set featured in the shot up above. Brief version: a year or so after my first visit to the  Scalpay tin house, I found the TV set abandoned on the pavement outside the Harris Hotel in Tarbert. I rescued it and stored it in my workshop, planning to return it to its rightful place one day. When Shona got in touch, this was seemed like the ideal time to complete the mission. Watch the TV clip to see what happened…

BBC Alba witness the return of the missing TV set:

There are rumours this house may be due for demolition soon by the council. In the picture below, taken by me in 2012, you can see all the sheets of tin on the front of the house are intact. Since then, one has gone missing (see above), presumably blown loose in a gale. If the house is deemed to be a hazard, it’ll have to go. Yet another reason why it’s important to document these buildings while they’re still with us. This little tin house has now been recorded both photographically and appeared on TV.

That’s probably the end of Leaving Home related TV coverage for 2015 but look out for another appearance in 2016 when Ian Paterson accompanies a Channel 4 film crew on a tour of the Uists, Harris and Lewis. More info as soon as it’s available.