The Dog, the Cat and Matilda 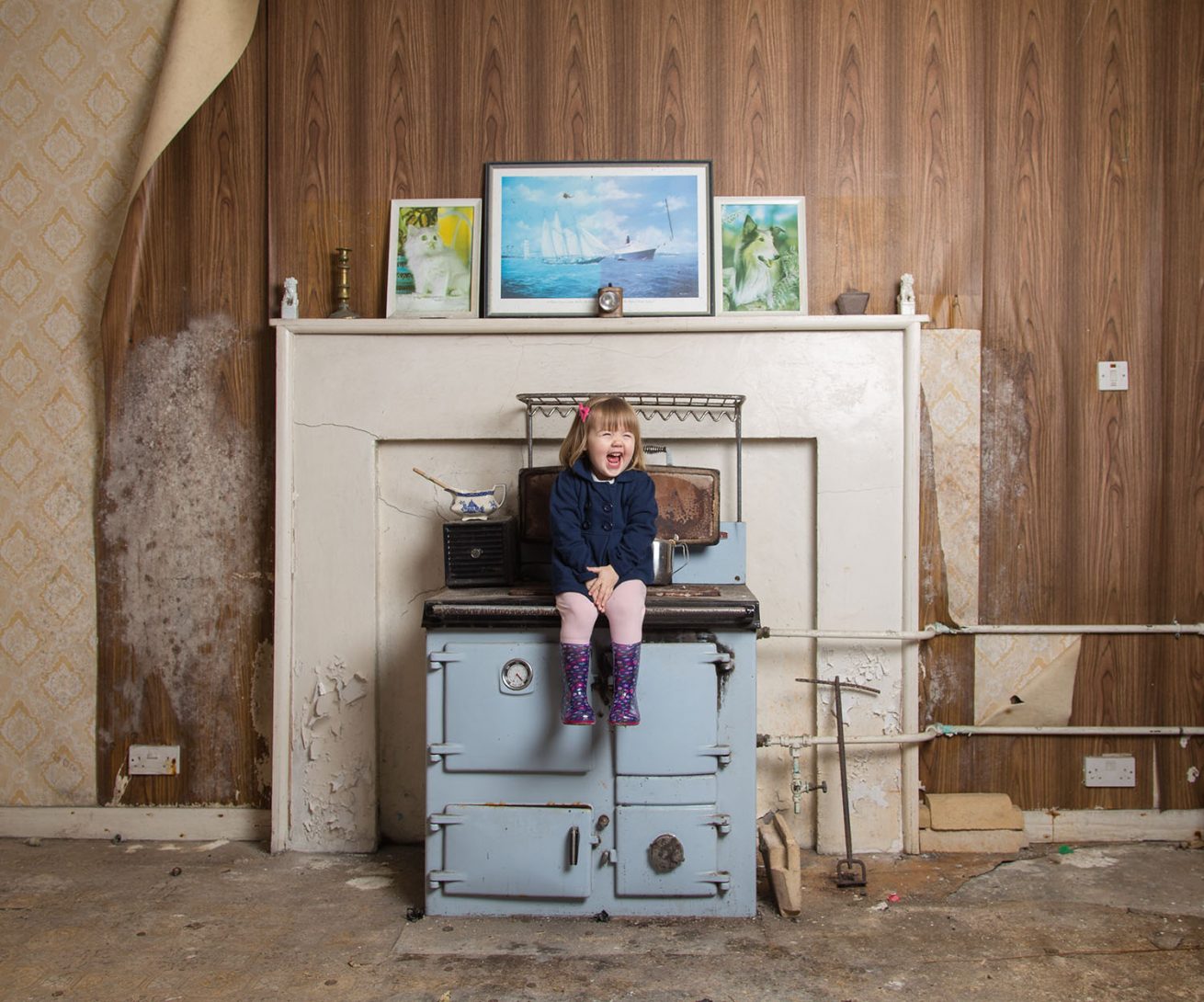 An abandoned house is set to become a home again.

In 2013 I exhibited a collection of prints with fellow photographer Ian Paterson. The exhibition was entitled ‘Leaving Home‘. All of our photographs shared a common theme – abandoned Hebridean houses.

One of my personal favourites was taken in 2013, in the house that’s the subject of this post. While setting up my camera, I noticed the skeleton of a small bird near the foot of my tripod. It was just out of the frame. I gave it a flick of my foot to nudge it into the scene. When I was reviewing the image at home, I had my title: ‘The Dog, the Cat and the Bird‘. 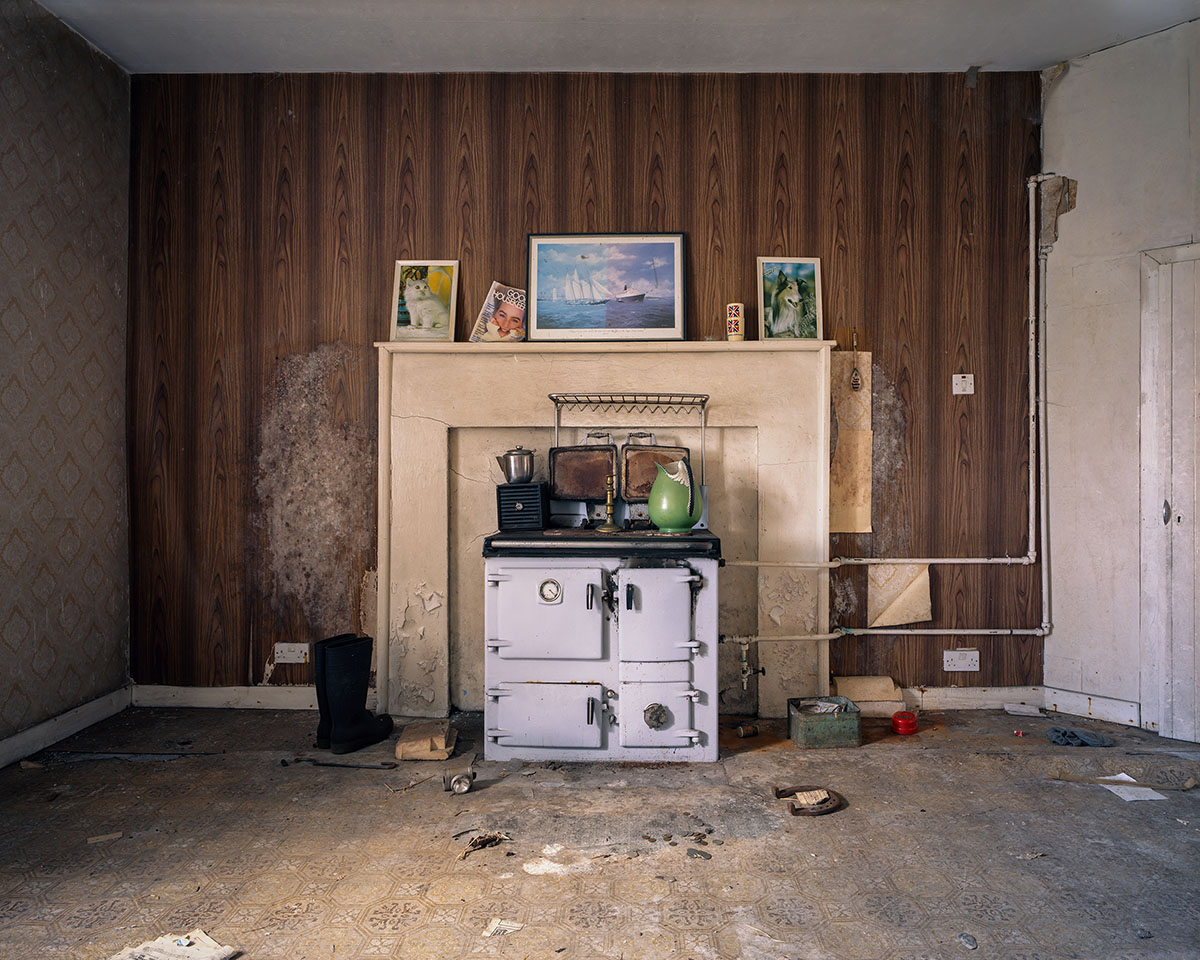 Since that first exhibition at An Lanntair in Stornoway, my collection of images has visited other galleries: the Andrew Carnegie Birthplace Museum in Dunfermline, Farfield Mill in Cumbria, The Lighthouse in Glasgow and an abridged collection in Talla Na Mara, Isle of Harris during May 2017.

In each location I’ve watched and listened in while people have stood in front of the 5 foot x 4 foot print. They’ve read the title. “I can see the dog and the cat, but where’s the bird?”. They always find it, eventually. Simple pleasures. 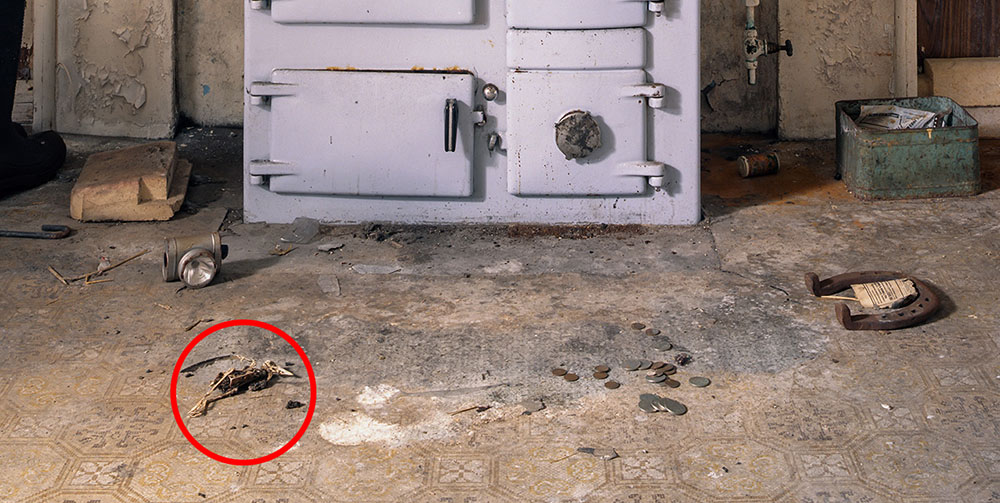 The little bird skeleton I pushed into place

When the photos were first displayed in Stornoway, Brian Whitington of Tighean Innse Gall was sufficiently inspired to try and do something about the large number of vacant houses scattered across the Western Isles. He got in touch and asked if it’d be OK to use one of my photos on the cover of the 2014 Western Isles Fuel Poverty Report, having explained the Western Isles had the highest levels of fuel poverty in the UK. “Go for it”, I said. 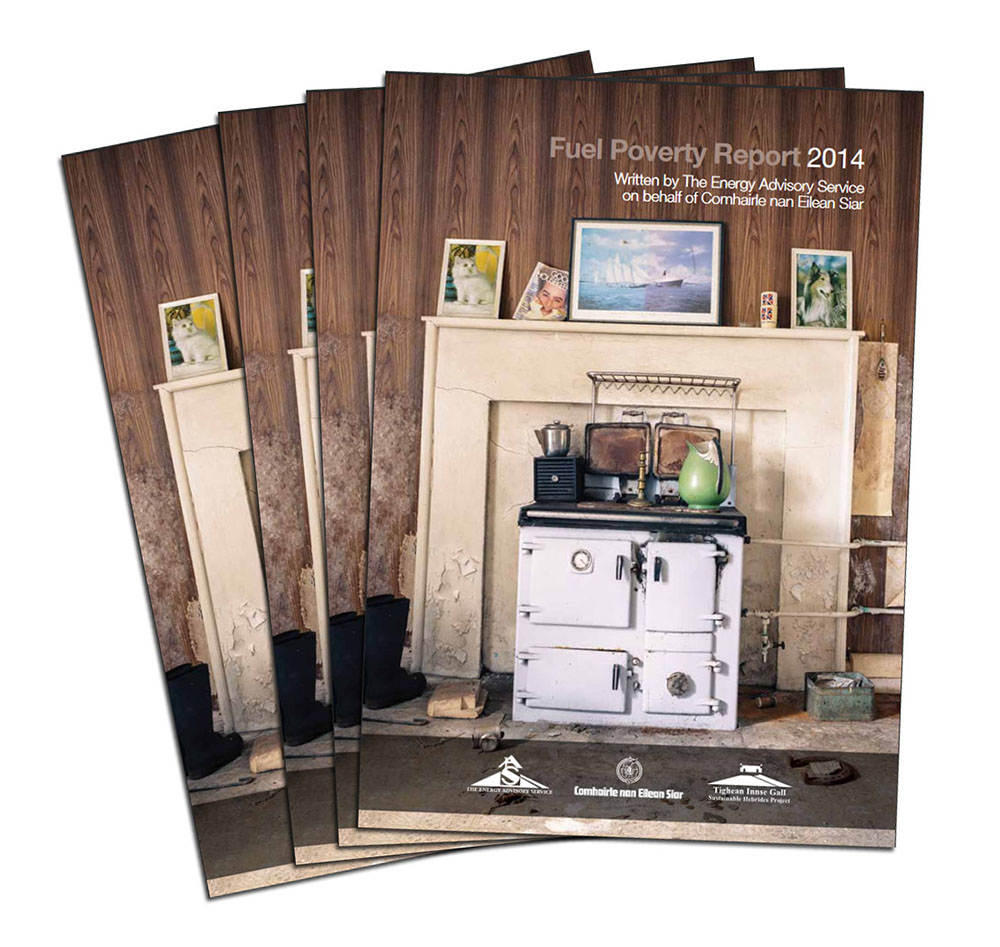 Brian then went to the trouble of targeting specific people he felt could make a difference. Copies of the report were sent to the home addresses of the various energy company directors. One of those directors took the contents of the report on board and set about writing off £40k worth of debt accumulated by those who were least able to pay. Some of the properties with the worst debt were visited and assessed by energy experts and advice was offered on how best to reduce their energy bills.

The next outing for my collection of abandoned houses was Dunfermline. The Andrew Carnegie Trust had taken an interest in Brian’s efforts to address the issue of fuel poverty and the high number of abandoned properties in the Outer Hebrides. They liaised with the William Grant Foundation, who pledged £50,000 to kickstart a project aimed at renovating one of the empty properties. This resulted in a certain amount of media coverage, including this front page headline on the Press & Journal… 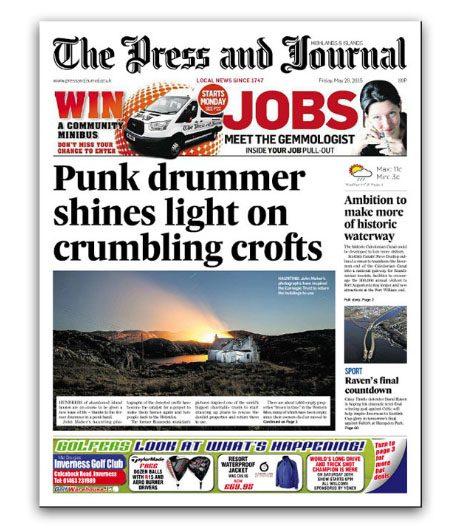 Press and Journal, May 2015. Click the pic to read all about it.

During the official opening of the Dunfermline exhibition, I was invited by Architecture & Design Scotland to take the exhibition to their space in The Lighthouse, Glasgow. That gave rise to a few more media experiences, including an interview with Janice Forsyth on BBC Radio Scotland, a brief appearance on the local TV news later the same day, then back into the radio studio the next morning for a chat on Good Morning Scotland.

STV news item from 2013. The only interview I’ve done while sitting on a vintage chemical toilet:

Q. Has any of this media hoo-ha resulted in the renovation of an abandoned house?
A. Err…. no.

There were a couple of potential candidates in Lewis and Scalpay but difficulties in establishing ownership, plus assorted red tape prevented progress. It’s a common story on the islands – houses left to relatives who may be overseas, unwilling to part with the old homestead. Many of the houses I’ve photographed are beyond economical repair. Some aren’t close to mains water and electricity. Being realistic, there aren’t many of these old buildings suitable for renovation – despite the ill-informed comments from Daily Mail Online readers (yeah, my pics made it on there too).

Of the many old houses I’ve photographed, this is probably the most sound. I’m told it dates from the late 19th century. Built from rock, as opposed to poured concrete, the main structure appears to be absolutely solid. It was probably one of the best quality buildings in Harris back in the day.

When I photographed the interior of Ensay House in 2011, there was an old map of South Harris on the living room wall. It listed Matilda’s new house as the ‘Temperance Hotel’. Many of the locals still refer to it as the ‘Coffee House’. I’m guessing that might have come about under Lord Leverhulme‘s tenure – he owned South Harris from 1919 until his death in 1925. He was a lifelong teetotaler and advocate of the temperance movement.

Bringing things up to date

A couple of months ago Donald called in to my workshop. He told me he’d bought ‘the dog, the cat and the bird’ house and about his plans to convert it into a home for his wife Catriona and their young daughter Matilda.

Donald told me they’d already started stripping out the place but they’d left the room with the dog and cat intact because they wanted me to take a family photo in front of that classic baby blue Rayburn stove. Yes, the dog and cat pics were still on the mantelpiece!

Here they are in their ‘new’ house: 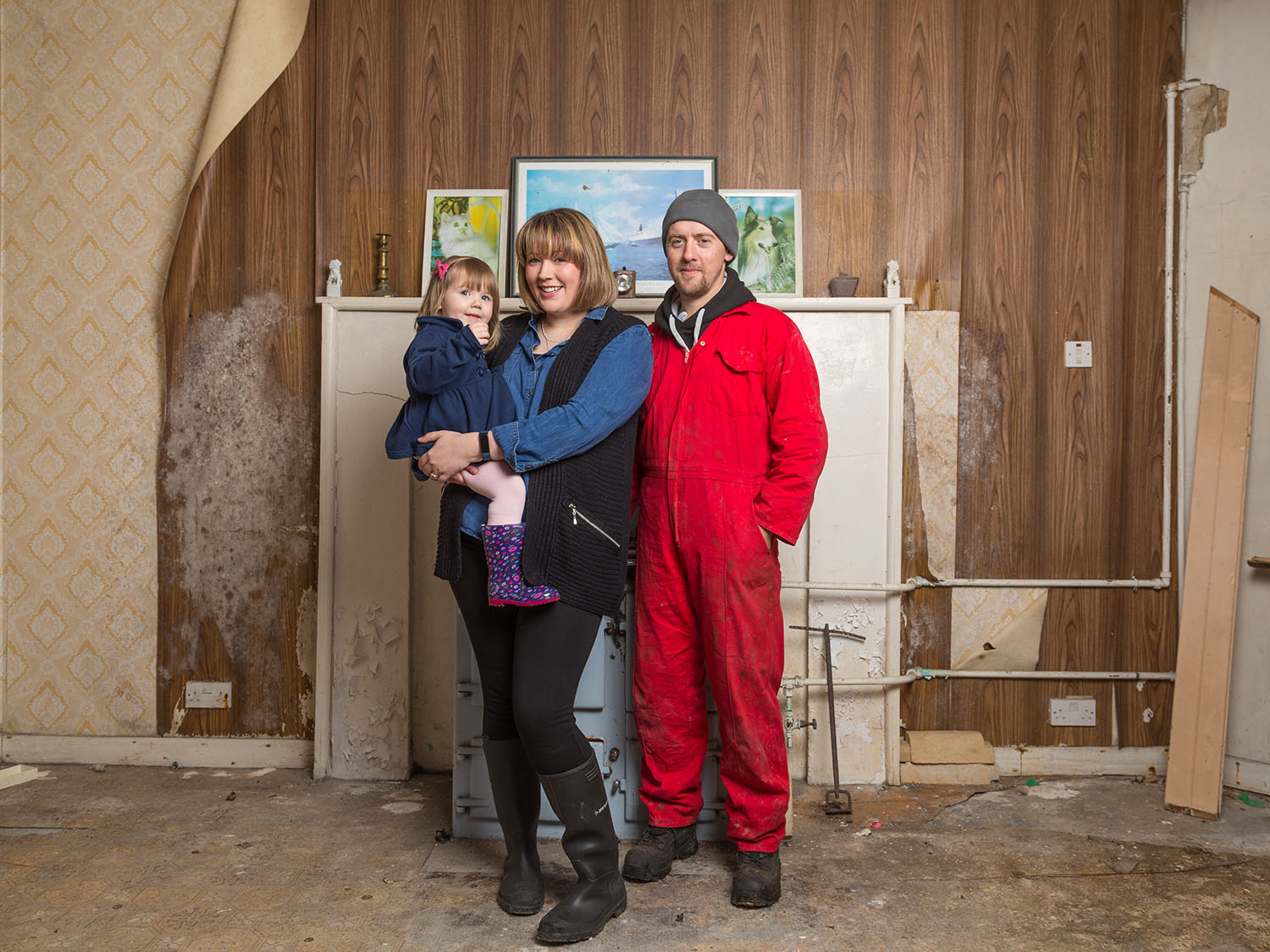 So… the truth is this outcome would have come about with zero involvement from myself, Tighean Innse Gall (TIG), the Carnegie Trust or any of the ‘punk drummer’ media nonsense etc. Brian and TIG tried their best to encourage owners of derelict homes to come forward and donate houses to the cause. In a bid to entice property owners into the scheme they were offering a complete eco-renovation free of charge, with title reverting to the owner after 10 years. Still no takers.

In the end it took a local family with local connections to make it happen.

While I was taking photos of Matilda and her mum and dad, four generations of the same family dropped in to see how things were going. As a non-native, it’s a good feeling to be invited into that circle.

Looking forward to going back for the next chapter in this series: Matilda, Catriona and Donald enjoying life in their fully renovated home. Donald’s promised me that will happen before Matilda finishes school!

PS.
Brian, TIG and Carnegie haven’t given up – the opportunity still exists! If you’ve got a derelict property suitable for renovation, get in touch with Brian via the Tighean Innse Gall website and he’ll explain the situation in more detail.

7 thoughts on “The Dog, the Cat and Matilda”