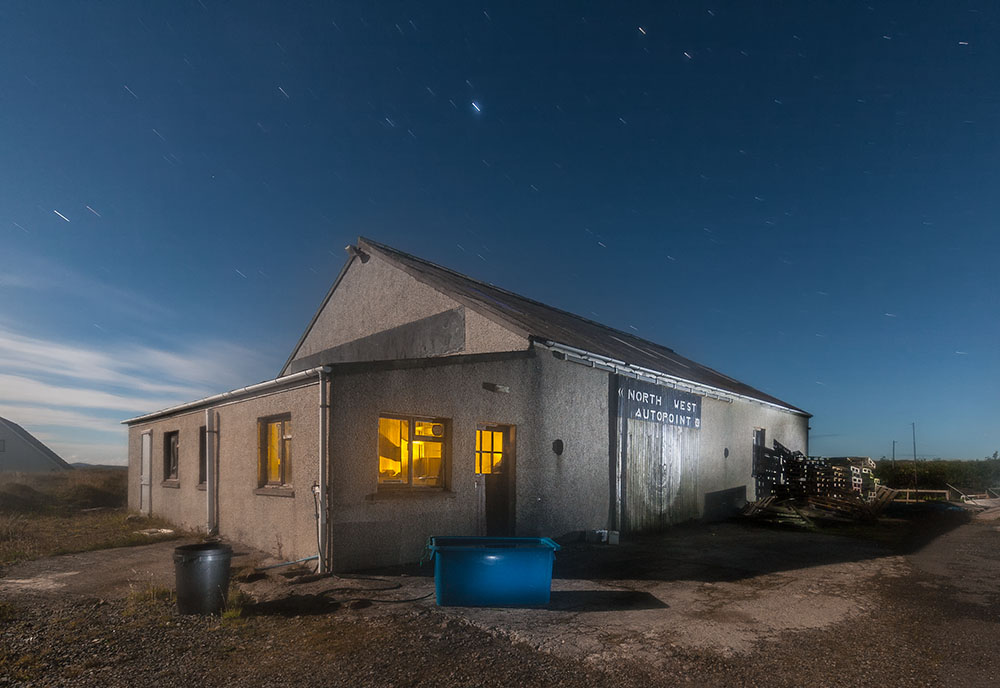 The death of Elvis Presley, the birth a new TV channel, the early days of punk and an abandoned petrol station on the Isle of Lewis.

Reading the weekly local rag today (Stornoway Gazette) and spotted  TV drama ‘Eilbheas’ is being aired again on Monday 23rd Jan  at 10.30pm on BBC Alba. If you ain’t seen it already, it comes with my personal recommendation. Yes, it’s subtitled but don’t let that put you off – if Danish drama ‘The Killing’ can keep viewers hooked for 30 x 1 hour episodes, just 60 minutes of high quality Gaelic TV drama is well worth the effort.

However, I have to declare a personal interest. I suspect like many others, my expectations of this locally made drama weren’t high but things looked promising from the off. Far from being the twee tartan-biscuit-tin-west-highland-terrier set piece I was expecting, just one minute in and the soundtrack is blasting out ‘Anarchy in the UK’. A couple of minutes later and I’m subjected to the strains of ‘What Do I Get‘ by Buzzcocks. Yep – I’m sat in front of the TV, on the Isle of Harris and I’m suddenly playing a part (albeit a very miniscule one) in the opening programme on the first night of my adopted home’s brand spanking new TV channel! I was hooked 🙂

Here’s a mini sampler from Eilbheas.
North West Autopoint, the subject of my night photo, appears at the 18 second mark

A little background… BBC ALBA is a dedicated Scottish Gaelic language digital TV channel, available on Sky channel 168, Freeview 8 (Scotland only) and Virgin Media 188. The channel was launched in September 2008. ‘Eilbheas’ had been specially commissioned to launch the new channel and would be BBC ALBA’s first ever programme proper. I suspect the majority of the programme’s budget had been blown on securing ‘big name’ actor Greg Hemphill (he of Still Game fame) to play the part of a recently deceased Elvis but it’s the island teenagers who steal the show IMO.

Anyway, my mini involvement aside, this is a genuinely good piece of TV drama. It’s a little clunky in places but the script is a clever piece of writing and the scenery, is…… well…… Hebridean; so either you ‘get it’ or you don’t. It’s a coming of age drama with a couple of clever twists. Like all good dramas, it merits more than one viewing and although some of the performances by younger members of the cast might be a little raw in places, that only adds to its charm.  I loved it.

“Eilbheas is based on Tonaidh, a 17 year old boy living on Lewis in the 1970’s. Alienated from his distant mother and alcoholic father he escapes into punk music. Suicide seems the only answer. He fails even at that and as he recovers from his overdose he sees Elvis. Tonaidh is not amused to have a mentor in the form of a man in a white jump suit, despite this Elvis touches his life. The character of Elvis glows against the stark island landscape in a tale which both touches the heart and makes you laugh. “Eilbheas,” written by Mairi Kidd and Torcuil Crichton, is a quirky comedy drama starring Greg Hemphill as Elvis and newcomer Sean MacLeod as Tonaidh.”

Fast forward two years… I was driving towards the west side of Lewis. A couple of miles past the Callanish Stones I recognised the abandoned garage forecourt of North West Autopoint, as featured in Eilbheas. Brakes slammed on, reverse gear engaged and long exposure night photo put into action: