The Happiest Bin Man in the West(ern Isles)?

Iain was born and brought up on the Isle of Lewis. He left the island when he was fifteen. Forty years later he returned home and took up employment as a ‘driver for the council’. One of his duties is driving the bin wagon, covering the whole of Lewis and Harris. Here’s how he described his job to me: “It’s magical! I’ve got the most scenic bin wagon route in the whole of the UK.”

I intercepted Iain and his crew mates on one of their weekly visits to Leverburgh Pier.

What follows is an overview of the equipment and techniques I’m using to light the people and scenes featured in this series of portraits. It’s not a step by step how-to. If you want to investigate off-camera lighting further, I’ve included a few links in the content below, plus there are plenty of articles and tutorials on the web that explain the more technical aspects in greater detail.

From the outset I planned to use additional light when creating this series of portraits. In my opinion it makes the images more visually interesting. It’s something I’ve been doing for years in my long exposure night photographs, and more recently with the interiors and exteriors of buildings. Adapting what I’ve learned so far, and using some of those techniques when photographing people requires a slightly different approach and some additional equipment.

First I’ll name-check a few photographers I’ve taken inspiration from. They’re all well known for their dramatic portraits. Joel Grimes and Dave Hill both rely on clever use of lighting (and specific light modifiers) to create a signature look. Another favourite is Drew Gardner. His website has several videos showing how many of his most famous images were created, including his ‘epic location’ water buffalo shot. I’m also a fan of Gregory Crewdson‘s work.

However, most of the work referred to above is created in a studio environment, or outdoors with a team of assistants, helping set up multiple lights to create the shot. In Crewdson’s case, sometimes complete sets are constructed with movie-size budgets.

Meanwhile I’m a one-man band with a single light, working quickly so as not to disrupt the subject’s day too much. I’ve had to work out a streamlined procedure in order to achieve a multi-light look that can be carried out quickly without a crew of helpers. I know I’m being over ambitious to think my low-tech approach could compete with the big budget boys but it’s worth a shot (or eleven).

Here goes…
It took eleven separate exposures to create the final image of Iain. To start, I set shutter speed to the camera’s max flash sync speed (1/160 sec for the Canon 6D), then adjusted aperture to make sure there were no blown highlights in the sky – the brightest portion of the unlit scene): f/10 at ISO 100. That leaves everything else in the shot looking very under exposed, but adding light will take care of that.

I got Iain to park the bin wagon so it formed a kind of corridor, with the almost matching yellow ferry notice boards on the left. I placed Iain in the centre of the corridor, but not before he grabbed a wheelie bin and propped himself against it. Perfect! I checked his positioning through the viewfinder, getting him to shuffle a little to the left so he didn’t have a lamp post coming out of his head. 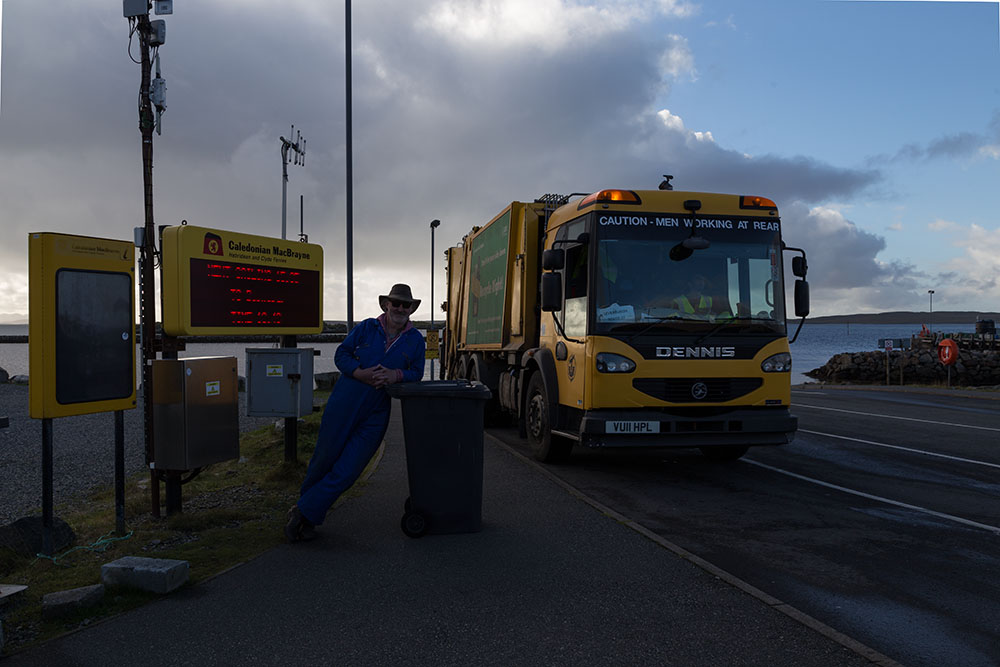 Let there be light
I used a 120cm Octabox with a 600 watt portable strobe to light Iain. The Octabox throws a very soft light on to the subject. It’s more flattering than a bare bulb flash, which creates very harsh, distinct shadows. The Octabox has two layers of diffusion material which has the effect of almost wrapping soft light around whatever it’s aimed at. It’s ideal for portraiture. The downside to using an Octabox outdoors is the high likelihood of itbeing blown over by even the slightest breeze when mounted on a light stand. My solution is to dispense with the light stand and hold it in position myself, as seen in the pic below: 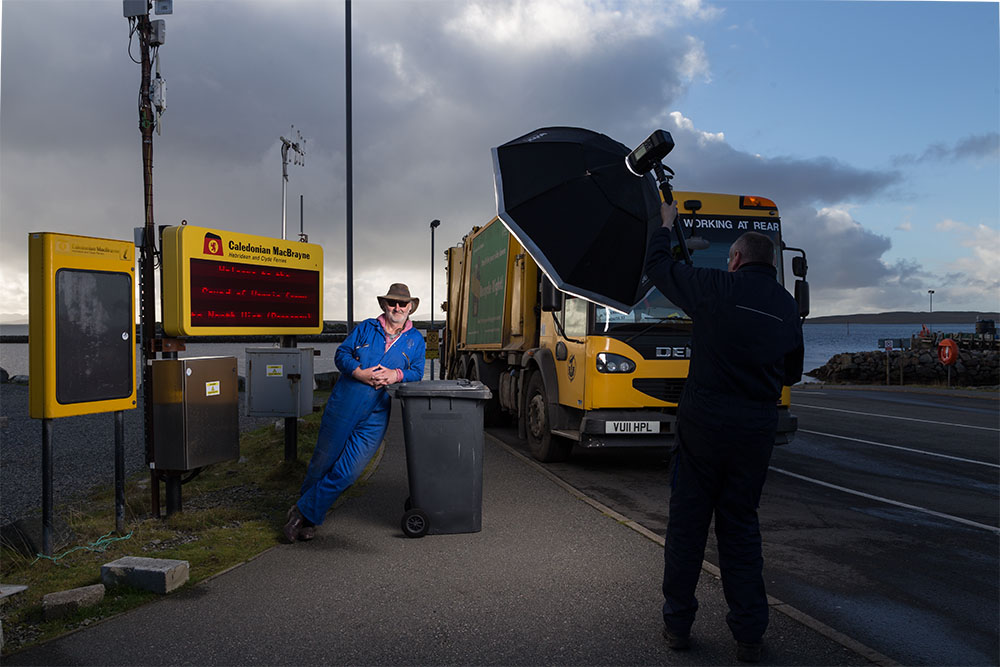 2: Lighting up Iain with a wireless 600w strobe fired into a 120cm Octabox

One problem: I now appear in the shot. But because the camera is solidly mounted on a tripod, I can layer a portion of the previous image (or one of the subsequent images) on top, and eliminate myself from the picture. Now Iain can exit the shot and I continue lighting anything else I want to highlight in the scene.

Having Taken care of the most important shot, I removed the Octabox and fitted a 22″ diameter ‘beauty dish’. It’s a lot easier to handle than the Octabox in windy conditions and because it has less diffusion, it throws out more light, making it effective for lighting larger areas, such as the side of the bin wagon. You can see the beauty dish mounted on front of the strobe in the right hand side of the shot below: 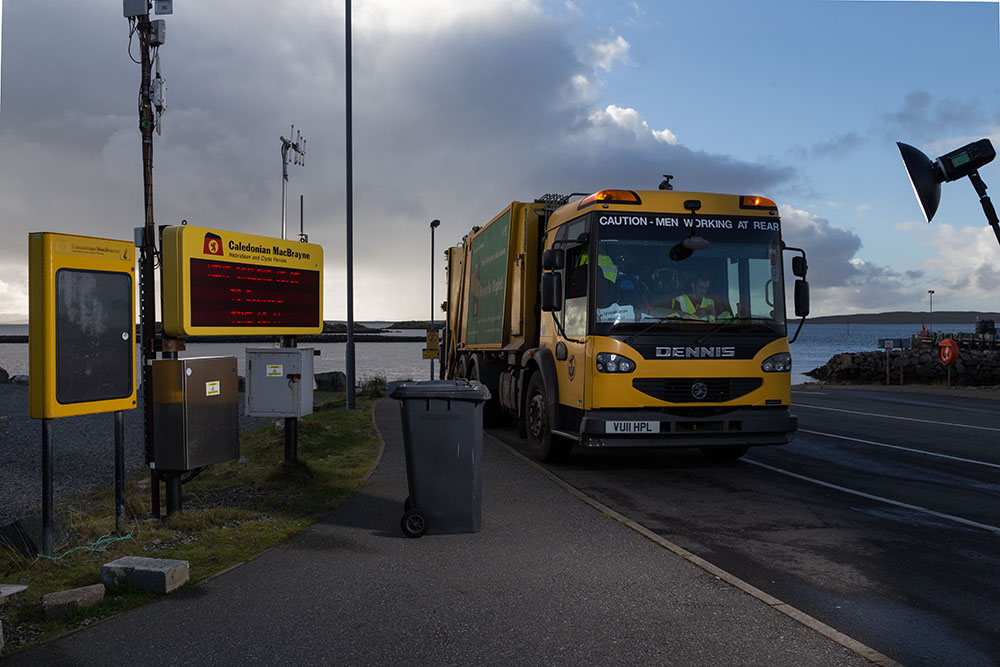 3: Using the beauty dish (far right) to selectively illuminate parts of the scene

I’m using a wireless shutter release to activate the camera (visible in my right hand in the pic below). The flash is also triggered wirelessly via a separate transmitter mounted on the camera’s hotshoe. That leaves me free to roam wherever I feel extra light is required. 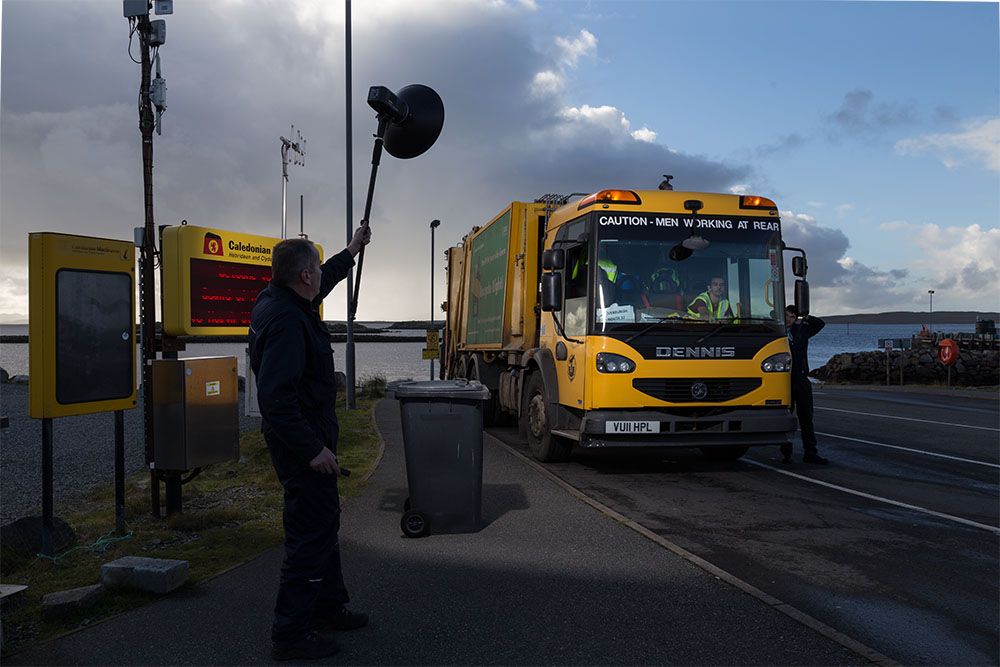 4: Activating the camera and triggering the flash via wireless remote in my right hand

It took two pops of flash to light up the side of the bin lorry, one towards the back, and another closer to the front. 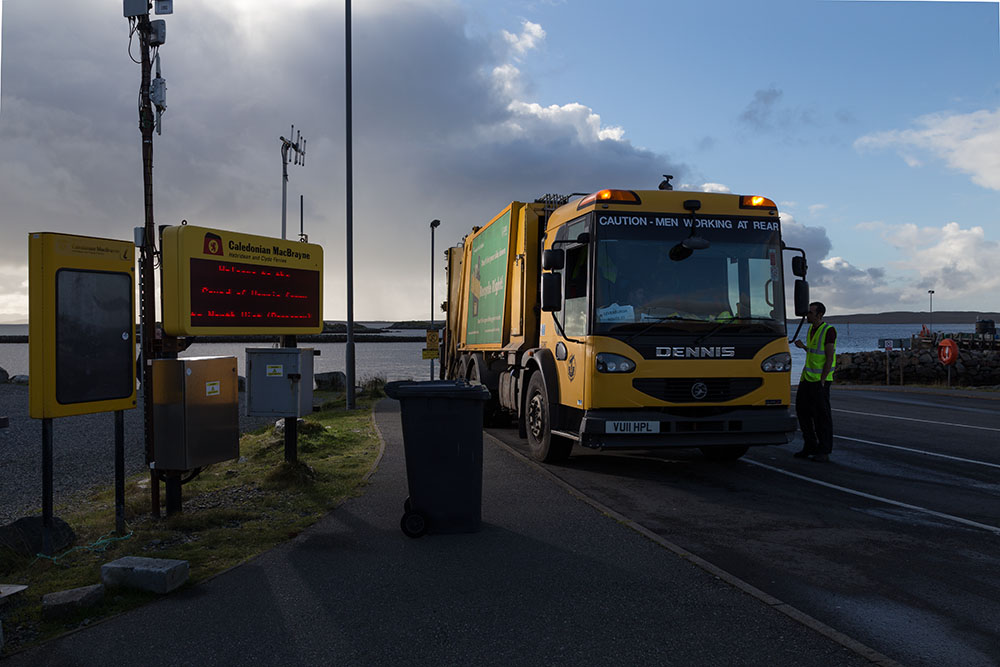 5: Lighting the side of the lorry. I’m tucked behind the digital notice board.

I asked Iain to switch on the bin lorry’s headlights: 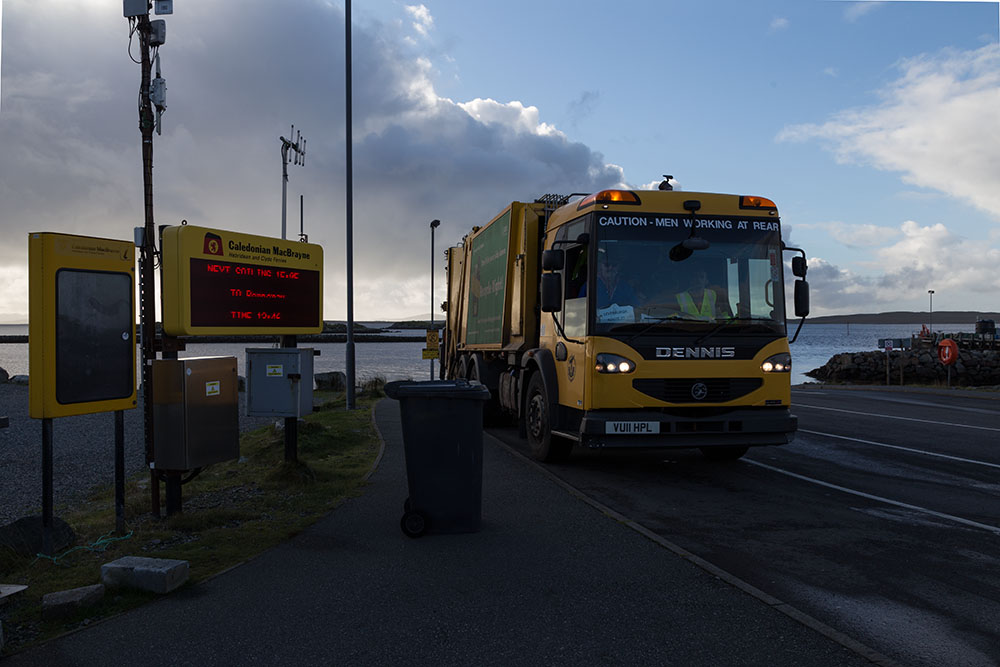 I’ve skipped a few, but you get the general idea. Here’s the last shot of the session – throwing some light on to the front of the lorry: 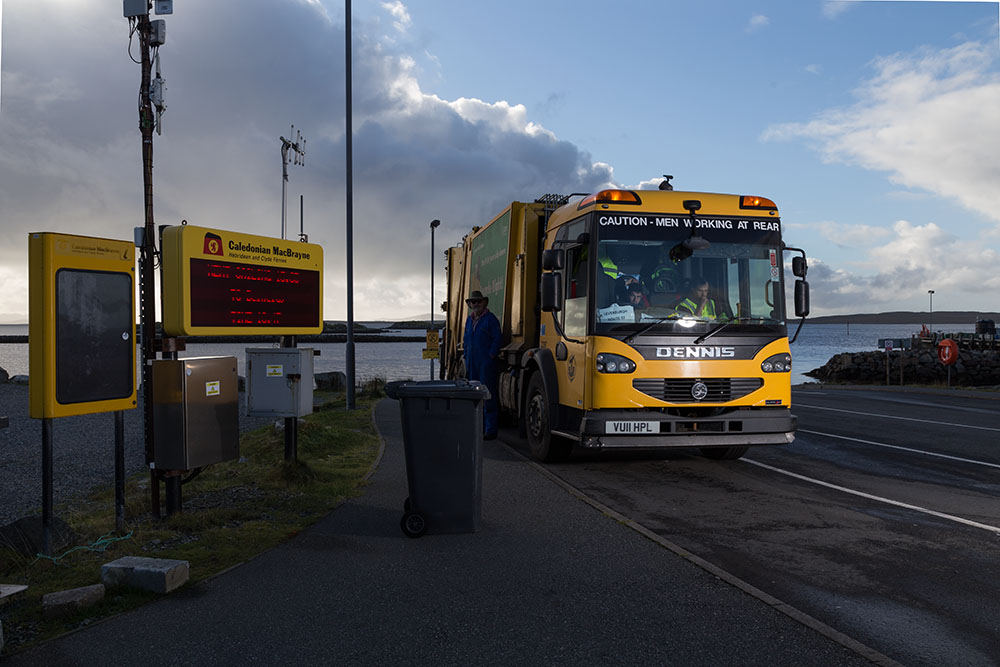 Having got the shots I wanted, I layered the images on top of eachother in Photoshop. I kept the pieces I wanted and eliminated the bits I didn’t, made a few tweaks to contrast and levels, then cropped the pic to centre Iain.

While I was editing the files, I spotted something I wasn’t aware of at the time: the letters on digital noticeboard were incomplete in individual shots – something to do with the frequency, compared to the shutter speed of the camera. I was lucky to find that by piecing together three or four different images I was able to fill in all the dots and make the sign readable.

One final thing, being conscious of the fact I was preventing the crew from getting on with their job, I checked EXIF data to figure out how long I spent doing this shoot. From the first shot with Iain leaning on the wheelie bin, to the final one, total time taken was just over four minutes. And that includes a bit of banter in between. Not bad! 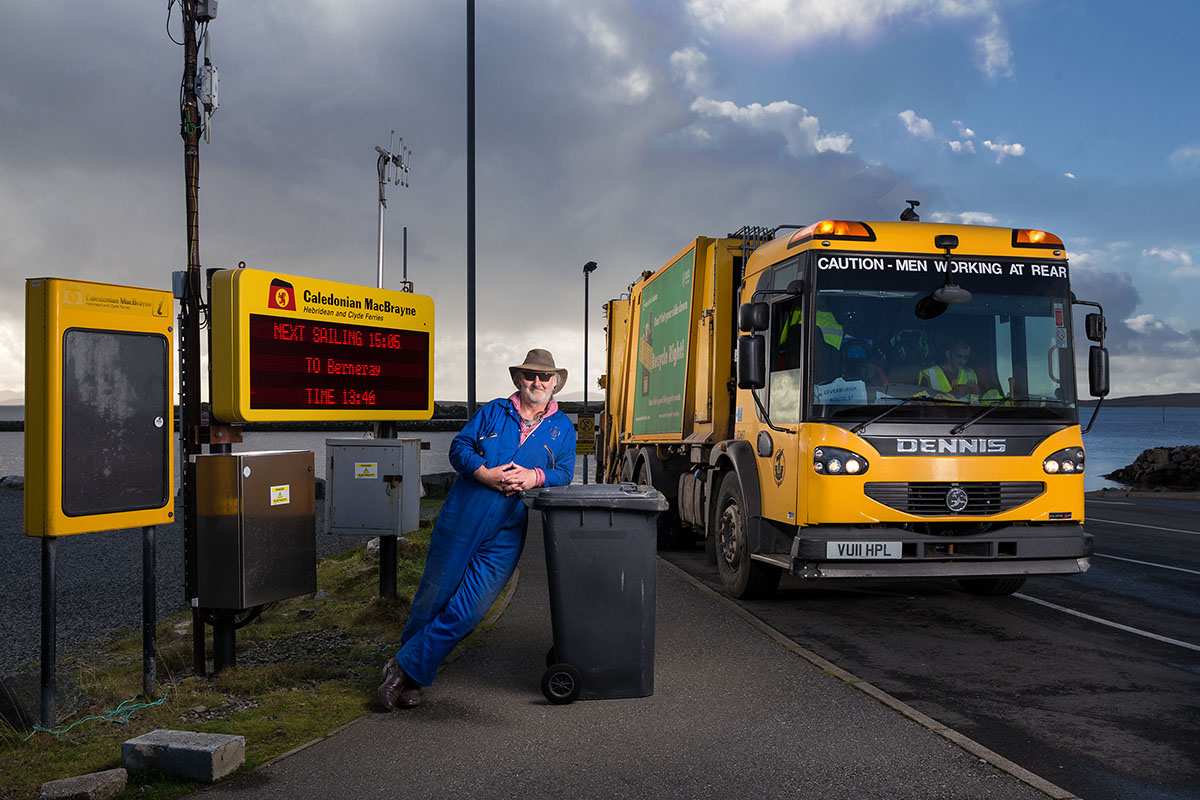 3 thoughts on “The Happiest Bin Man in the West(ern Isles)?”