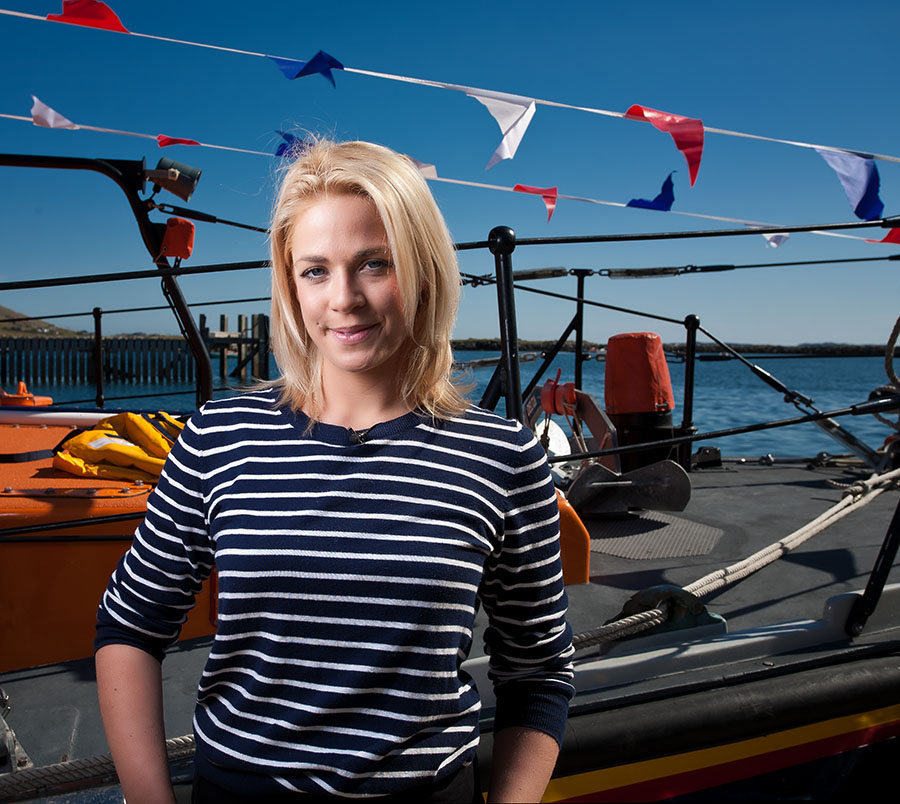 Overpowering the sun – on a budget!

A big event here yesterday (May 2nd, 2012). The village of Leverburgh, population 200, saw the official opening of its brand new lifeboat station – the first RNLI all-weather lifeboat facility in the UK for 22 years. I knew there’d be plenty of people snapping away so figured I’d try something a little different. I decided to concentrate on taking close-up portraits of the people in attendance. My plan was to get as many of the crew as possible and also target members of the crowd.

If you’d rather skip all the technical info and just look at the pictures, jump straight to the full gallery

In an effort to make the photos more visually interesting and avoid the traditional ‘mugshot’ approach, I knew I’d have to do something other than rely solely on the light provided by the sun. This would take some doing with the basic kit I had at hand, but if you don’t try….

I dug out a 60cm square softbox. It came with a bracket designed to accept a single flashgun. With the mid-afternoon sun being so bright, it was unlikely a single flash would deliver enough light to give the effect I was after. I taped and zip-tied a second flash on top of the first.

Lighting rig in action. The softbox/flashgun assembly is being held by my lovely assistant Helen, aimed at the shaded side of the young fisherman. Thanks to Donald Hodgson for supplying this photo.

The flash bracket restricted the sight of the second flash slightly, resulting in a total of approximately one and two thirds worth of flashgun firing into the softbox. With a wireless transmitter mounted on the camera’s hotshoe, I attached a matching wireless receiver to one of the flashes. The second flash was set to slave mode, meaning it would be triggered by the flash below. A couple of test actuations proved it was all working as it should. I mounted the whole double flash assembly and flash bracket onto a monopod. Fortunately it wasn’t too breezy – unusual for these parts – otherwise the softbox would be tricky to handle.

Now to put theory into practice. To make the subjects ‘pop’ in the photo, the background would have to be under exposed. By underexposing in this type of bright sunlight, the sky would look a more pleasing deep blue but without additional light, the subjects would be too dark. The trick is to add more light but to the subject only, leaving the background slightly underxposed.

Tech stuff: I set an ISO of 100 and shutter speed of 1/200th of a second – the maximum flash sync speed allowed by my camera. The only means left for adjusting exposure would be lens aperture. A few trial shots and things were looking promising. As long as I positioned the softbox close to the subject, I had enough flash power to effectively overpower the sun, albeit over a relatively small area. Hence the reason for the majority of these shots being head and shoulders – I’d have needed a much bigger light source to provide adequate coverage for full length portraits or group shots. In fact I was able to reduce flash output to 1/2 power on each flash, meaning I could probably have got away with a single unit at full power. The advantage of running two flashes at 1/2 power meant I’d have longer battery life and it would take less time for the flashes to recover between shots, plus I’d have fire power in reserve if needed.

This was done on the opposite side to which the sunlight came in. If I got my settings right, this cross lighting effect would see the flash throw a nicely diffused wash of soft light on to the subject’s face. The doubled up blast of flash was brighter than the sun (overpowering the sun). This creates a nice shadow on the far side of the face, with the sun acting as a free source of slightly less intense fill light. It’s hard to explain but if you check out the pictures, the brighter side of each person’s face was lit by the softbox and the slightly darker side lit by the sun. In most instances I fired off three shots, making adjustments to aperture to control background exposure level and then positioning of the softbox to get the kind of light balance I was happy with. It had to be a quick process – keeping people hanging around while fumbling with camera and light settings makes people uneasy and comes across in the shot. I had to work fast if I wanted to capture some of the spontaneity, excitement and atmosphere that was present on the pier that day.

Bare flash would also work in this situation. It’d be a lot easier to carry around a couple of flashguns than the softbox rig I was using but bare flash throws out a very harsh form of light, casting clearly defined, hard shadows. This is far less flattering than firing the flash(es) through some form of light modifier. The larger surface area of the softbox diffuses the light and is more flattering to the human form than the ‘trapped in the headlights’ effect you see when using a small concentrated burst of light from a bare flash.

I’ll round off with a few more of my favourite shots from the session: