Scottish Field, Jan 2016… behind the scenes 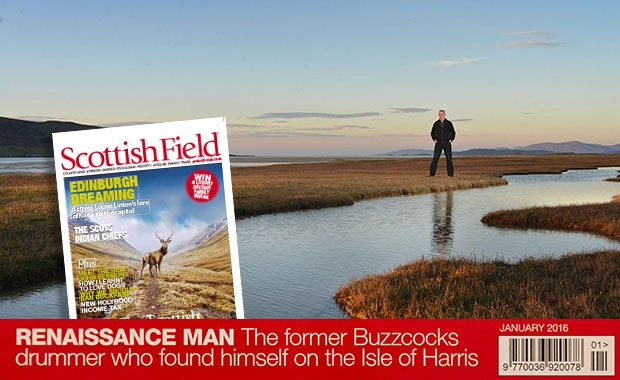 SCOTTISH FIELD, JAN 2016… BEHIND THE SCENES

A behind the scenes look at the Scottish Field article, including some of Angus Blackburn’s photos that didn’t appear in the mag. It’s in the shops now. See the published article here.

Must admit I was surprised when I got a call from Kirsty Smyth of Scottish Field a few months ago. She was looking to do a “lifestyle/culture” feature for the mag. I was aware of Scottish Field but I’d never actually flicked through a copy before – I had it down as a publication aimed squarely at the hunting, shooting and fishing brigade. Not exactly my scene! Nor was I expecting the kind of stuff I get up to, to be of interest to their readership. But Kirsty thought otherwise; she’d interview me over the phone and they’d send their senior photographer, Angus Blackburn, to follow me around for a day on Harris.

I met up with Angus outside the world-famous Butty Bus in Leverburgh on a sunny October morning. Our first port of call was one of the houses I’d photographed as part of the Leaving Home exhibition. It’s a couple of years since I last visited this house, so it was good to see things were pretty much as they were when I photographed the same room in 2013.

During our Butty Bus lunch break, a 1980s American cop car rolled up at Leverburgh Pier. Even more surreal, it was towing a 1960s Mk2 Jaguar. It looked like the police had collared the villains’ getaway car. Spotting a photo opportunity, Angus asked the owner if we could borrow the police car for a few photos. It wasn’t the first time I’d seen this particular police car. I’d spotted it in Lochmaddy (North Uist) in 2014, when I was traveling from Berneray to Barra to photograph war memorials for the Gaelic Arts Agency (more info on that trip here).

There was an hour to spare before the Sheriff’s car and Jag had to board the ferry for Berneray. I got behind the wheel of the Ford LTD Crown Victoria and sped off to the west side of Harris, with Angus following in his estate car full of camera gear and lighting equipment. We pulled into a passing place at Northton, switched on the roof mounted red and blue lights and Angus got to work…

We took the police car back to Leverburgh, hooked up the Mk2 Jaguar just in time for them to catch the ferry to Berneray. Leaving the cop car and Jag behind, Angus and I headed for the east side of Harris with my 1963 gold sparkle Premier drum kit in the back of my van. We were location hunting. I led the way. Angus was following and would signal me to stop when he identified a suitable spot. Between Lingerbay and Finsbay I got the sign. It was the same spot I’d taken one of my best selling long exposure night photos in 2010 (The Road Home).

Chasing the remaining low October light, Angus suggested we head back to the west side of the island before the sun set. Here’s the result…

It was a good day. Angus was fun to work with. He’s a great photographer. The finished article includes a couple of my photographs, both of which were shot on colour negative film with my 1960s 5×4 Sinar. They’ve been well reproduced and look good on the page. I like the fact I’ve managed to get a couple of my photos of decaying Hebridean homes squeezed in between adverts for multi-million pound properties, 5 star restaurants and two hundred and fifty quid designer wellies. Thanks to Kirsty for going ahead with the idea and a special thank you to Angus for his brilliant photography and entertaining company for the day. Turned out to be a far more enjoyable experience than I thought.

Just goes to show… you can’t necessarily judge a magazine by its cover.

PS. a big thank you also to Western Isles Classic Car Hire for allowing us to commandeer the cop car at such short notice. It made this punk’s day.

Here’s a snapshot of the article as it appears in the mag (minus adverts). Click on any of the images below to see the article at full screen resolution.