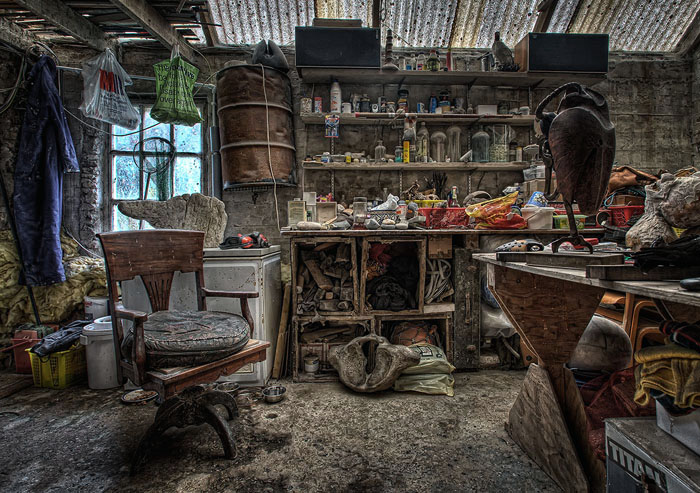 The Royal Scottish Academy Annual Exhibition ran from April 28th to June 6th. It’s a highlight of the exhibiting year and features RSA Academicians and selected submissions from leading and emerging artists from across Scotland. Harris based sculptor Steve Dilworth was one of those invited to participate. The theme of this year’s show was The Artist’s Studio. The RSA asked each of the participants to supply an image of their studio, the emphasis being on the artist’s chair – apparently an important (and much used) item in any self respecting artist’s creative space 😉

I’ve photographed Steve and some of the items in his studio previously. He suggested I pay another visit, this time making the chair a prominent part of the picture, as per the RSA’s request.

The RSA published the image on the front cover of their Summer 2012 newsletter, cropped to suit:

Every where you look in Steve’s studio there’s an item of interest. Due to the sheer amount of  ‘stuff’ he’s got all over the place, I wanted to capture as much detail as possible.  I started the session by setting up three lights. After much experimentation I wasn’t getting the kind of results I’d been hoping for. I eventually abandoned the lights and went down the HDR route. The final image consists of nine exposures shot in one stop increments. I merged them in Photomatix Pro, with some final processing carried out in Photoshop. This multiple-exposure technique allows me to reveal detail in the brightest and darkest areas – from the sunlight coming through the window and perspex roofing to the darker areas underneath the workbench. This approach pulled out a whole lot more detail than any of my single exposure attempts.

Before I abandoned my lighting setup, I nabbed this portrait of the artist waiting patiently for me to get my act together. This is a single exposure using two flashes – one mounted in a 60cm softbox and the other firing into a shoot through umbrella.

For a more in depth look at Steve’s work, check this 15 minute video, Steve Dilworth – A Portrait by Paul Cox. With contributions from Iain Sinclair and Robert Macfarlane.

4 thoughts on “The Artist’s Chair”