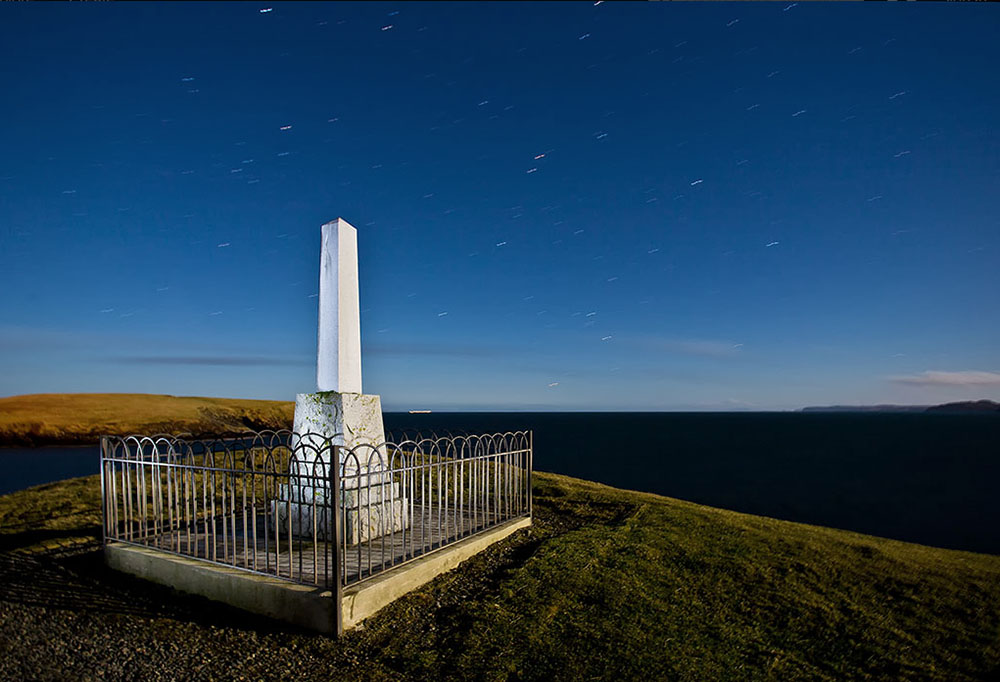 Earlier this year I was commissioned by the Gaelic Arts Agency (Pròiseact nan Ealan) to photograph  a series of War Memorials throughout the Western Isles as part of a project commemorating the 100th anniversary of World War 1. The resulting images are being incorporated into large display panels as part of a touring exhibition which will visit a number of venues in the Western Isles and further afield during the remainder of 2014 and continuing through 2015. Friday October 31st sees the exhibition arrive at An Lanntair in Stornoway, where it will be officially opened by broadcaster and author, Trevor Royle.

CALL OF THE GAEL (Gairm nan Gaidheal) aims to discover and retell the stories of the island communities who experienced the devastating impact of the First World War more than most other areas – per head of population the Western Isles lost more men than elsewhere in the commonwealth. The project continues throughout this year and into 2015 with a series of exhibitions and events planned throughout the islands and other areas of Scotland.

Chrissie Macrae, project co-ordinator at Pròiseact nan Ealan, said: “We’re putting on the exhibitions because of the incredible contribution that the Western Isles made to the First World War.”

Armed with a checklist of locations, I started with the one closest to home: the memorial in Tarbert, Isle of Harris. As with many of the structures I’d be visiting over the next week or so, this wasn’t the kind of subject I’d normally photograph. I’d been given a free hand as to how the final images should look. In an effort to give each memorial a distinctive look, I used a mixture of techniques.In many of the shots I added additional light, firing strobes from multiple angles to create a more three-dimensional appearance and also to lift the subject from its surroundings.

Many Lewis families would have been celebrating the dawning of a New Year in the early hours of January 1st, 1919.  The celebrations would have been particularly sweet as the families were also awaiting the imminent arrival home on leave of their men folk, following the ending of hostilities.  No one could have predicted that so many veterans – having survived the brutality of the Great War – would have their lives tragically plucked from them within a stone’s throw of their island home.

The exact number of men who were aboard the Iolaire that morning is not known with certainty; a proper passenger list had not been recorded prior to her departure from Kyle.  However, subsequent evidence suggested that there were 284 servicemen and crew aboard.  Of these, 205 men were to lose their lives – with only 79 survivors being able to finally complete their long journey home from the ravages of war.

The Iolaire Disaster, as it has become known, remains one of the worst peace-time catastrophes in British maritime history.  Its consequences would be felt in every Lewis parish, as the flower of Island youth was torn from many an Island family.

“No words in any language could register the pain or evoke the trauma. It was an event so cataclysmic as to affect Lewis & Harris for the rest of the century and beyond. In its immediate aftermath the people of the Islands found themselves in the opaque, contorted world of a sleepless nightmare, rocked between horror and uncertainty. Some men returned across the moor like ghosts: ‘How he got ashore I do not know, but he was like a man out of his mind. And those in the village that had lost men – the mothers and the wives – they were coming in to ask if he had seen any sight of Donald, or Angus, or John, but he could only look at them and the tears coming down his cheeks; and he had two words, I remember that he had two words that he said often: ” Good God….Good God….”

[The words of Calum Smith, who was six and a half at the time of the disaster.]

I first visited the monument erected in memory of the Iolaire on a cold winter night in March 2011. It’s a very unremarkable and modest stone column, surrounded by a small steel railing. It overlooks the site where the Iolaire ran aground. It’s hard to believe so many men died that night when you see for yourself how close they came to shore. Quite an experience when you’re standing there alone in the moonlight at 3.30am.

The photo above was taken on cold March night in 2011. It’s a 4 minute exposure – hence the extended startrails. You can also see the movement of a ship on the far horizon.

Three and a half years later, I’m visiting the monument again to photograph it for CALL OF THE GAEL. This time it’s daylight. There’s a fishing boat and a couple of kayakers out on the water, close to the point the Iolaire sank. I don’t want anyone in the picture so I set up a slightly different composition to my previous night photo:

The best known and most visible war memorial in Lewis stands just outside Stornoway. I’d already photographed it on a blustery summer day in 2010. Using a 10 stop filter I managed the stretch the exposure out to 60 seconds and got lucky with the cloud movement:

For this latest visit, I arrived much later in the day, forcing me to shoot from the other side of the tower due to the angle of the sun. I’ve supplied both versions to the graphics people, so I’ve no idea which one they’ve chosen. I prefer the one above from 2010 but here’s the newer one for comparison:

Also on the site of the Lewis War Memorial is this cross, overlooking Stornoway harbour:

On the way back to Harris from Stornoway, I stopped off at the memorial in Kinloch:

There are many other war memorials dotted around Lewis and it was a shame not to include them but for one reason or another they weren’t included on the list of locations I was given. While on my travels, I stopped off at another couple of monuments in Lewis. While neither is directly related to the first world war, both denote significant events in the history of the Hebrides.

This memorial to the Aiginis Farm Raiders, was designed by Will McLean and built by local stonemason Jim Crawford in 1996. It commemorates a raid on Aiginis farm in 1888 carried out by impoverished local crofters. The raiders were ruthlessly punished by the authorities and received prison sentences ranging in duration from six to fifteen months:

Further down the road towards Harris, the Pairc Cairn remembers similar events: in 1887 a group of local crofters killed some of the local laird’s deer in an effort to draw attention to their own poverty and deprivation. The so-called ‘deer raiders’ were put on trial, but acquitted of rioting. Their case served to raise world-wide awareness of social injustice in the Highlands.

This was another revisit… I first photographed the Pairc Cairn four years earlier in 2010. That particular shot was the subject of a previous blog post: Remembering the Clearances.

CALL OF THE GAEL opens at An Lanntair, Stornoway on Friday October 31st. Other venues to be announced.

Read the next part of this story:  War Memorials, Part 2: Uists and Barra