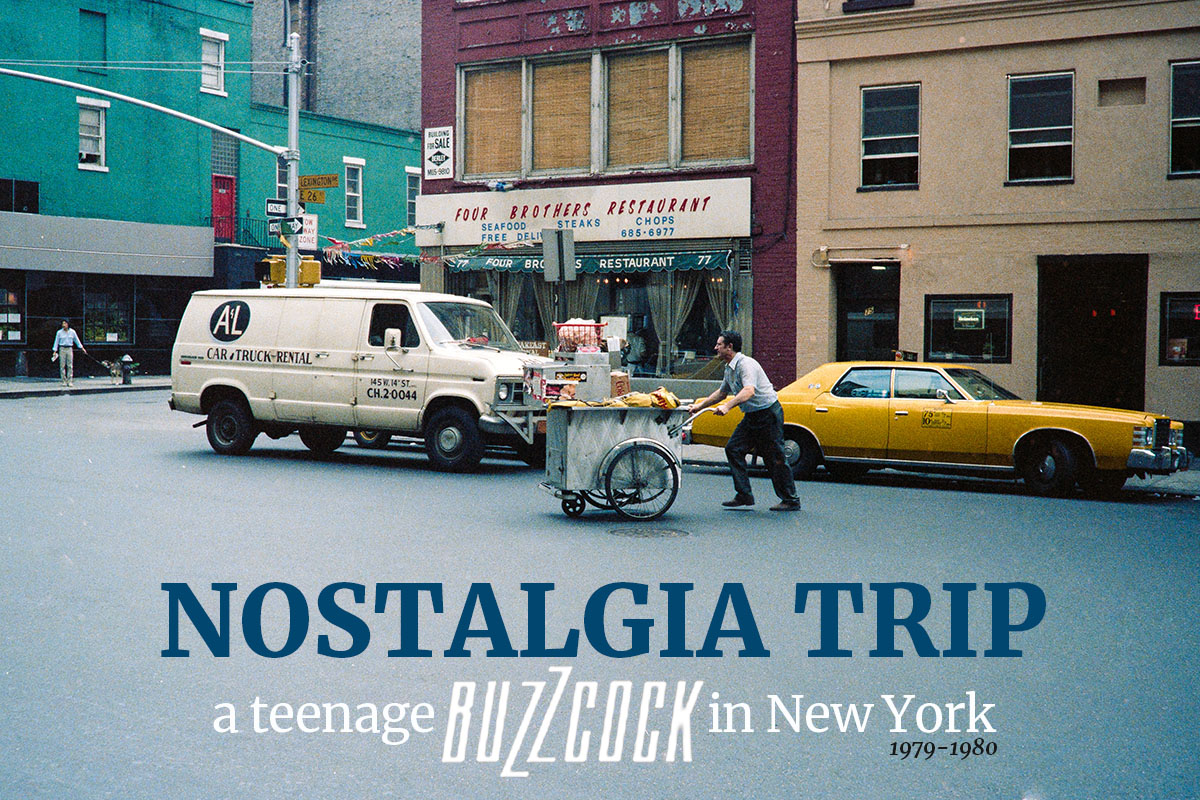 I was nineteen in 1979. I was about to spend three weeks travelling across America with Buzzcocks – our first US tour. Talk about excitement! None of us had been to America before. I needed a camera!

At this stage of my photographic career, I didn’t know the difference between an f-stop and a lens cap, so my first camera had to be easy to use… point and shoot.

If you were around at the time, you can’t fail to have escaped the barrage of TV adverts featuring David Bailey promoting the Olympus Trip 35. I believed the hype and handed over my money. Looking back at the results four decades on, I’ve got to say that little Olympus Trip did a great job. Fifty quid well spent!

Between August 1979 and November 1980 we toured the US three times. So did my Olympus Trip. It never occurred to me to take lots of band shots. I took a few – stay tuned for future episodes – but I was more interested in photographing AMERICA! Most of the photos are street scenes, buildings, views from the back seat of the van, hotel interiors and lots of 1950s American cars.

I’ve got around 200 photos from our 1979 & 1980 American tours. Going back a couple of years, I shared some of these photos on my twitter and instagram pages, but they were based on scans of the original, mini-sized 5″ x 3.5″ prints I got back from the local chemist shortly after returning home. The images I’m sharing here are far superior. I’ve made high resolution DSLR scans of the original negatives, using a full frame camera, 100mm macro lens and a good quality light table. I’ve also been using a brilliant piece of software called Negative Lab Pro to carry out the negative to positive conversion. This process has produced pictures with far greater detail and superior image quality compared to the original 5″ x 3.5″ prints I’ve had in a photo album for the past 40 years.

Later in this series I’ll include a post for the tech nerds (like myself), describing how I scanned the negatives and the process of converting those scans from negative to positive.

To get the ball rolling, here’s a selection of photos I took while wandering the streets of New York…

Someone suggested posting my NY photos to the Manhattan Before 1990 facebook page. They’ve accumulated a superb collection of photographs, and have been very helpful identifying some of the locations I’d photographed but couldn’t place. For example, someone identified the exact location of this ‘Explosives’ truck and explained why it was there. I didn’t hang around to ask… took the pic and briskly moved on.

Another benefit of these higher resolution scans is I can read signs and street names that weren’t legible on the original prints. On the full size scan of the pic below, I can clearly see the sign inside the left entrance of the parking garage is ‘Aero Garage, 147-149 E 24th Street’.

Only fair to include at least one music related photo in this post: Max’s Kansas City – legendary 1970s music venue, Warhol hangout and where the Velvet Underground recorded that live album.

More photos of New York to come in parts 2 and 3 of this series. Then I’ll move on to some of the other towns and cities we passed through as we ventured west.