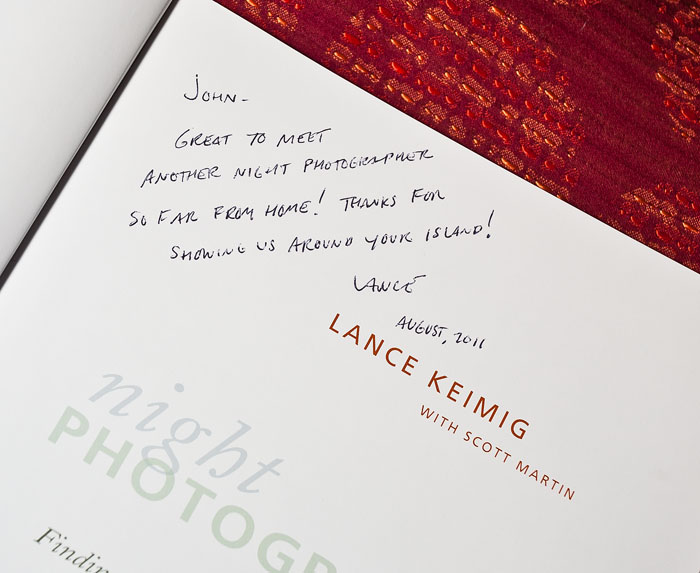 Back home after an afternoon trekking around the south west corner of Harris with Massachusetts based night photographer, Lance Keimig.

Lance is conducting one of his annual tours of the Scottish islands. Since 2004 he’s been alternating visits between Orkney and the Western Isles. This year it’s the turn of Lewis and Harris.

I first came into contact with Lance after seeing his amazing night photo of Calainis, taken during his tour of the islands back in 2009.

Lance and his crew of eight US photographers headed south to Harris today from their base at Breasclete on the Isle of Lewis.  I grabbed my camera and set off to meet them near Scarista golf course. Also in the camera bag was my xmas present copy of Lance’s book, Night Photography: Finding your way in the dark. Published in 2010, his book is now on it’s 5th run and has been published in several languages. An absolute ‘must have’ for anyone with an interest in night photography, it’s a mine of information, the like of which you’re unlikely to attain from any other single source. It also features contributions from other well renowned night photographers.

Enough  spiel from me… suffice to say, it gets my recommendation. Check the reviews on Amazon for further confirmation!

Having met up at Scarista, we headed for coffee at the the newly renovated MacGillivary Centre in Northton. Run by Gail and Reuben Miles, the couple have been busy converting the building from rundown visitor centre into a great little cafe/coffee shop and renamed it the Temple Cafe. Although they’re not officially open yet, I heard their brand spanking new Italian coffee machine had been delivered a few days earlier. What better way to test both the equipment and Reuben’s newly acquired barista skills than turning up on their doorstep unannounced with a mini-bus full of coffee craving Americans? 😉

Next time you’re in the area, call in at the Temple Cafe for a drink and a snack. Tell ’em the American photographers sent you! It’s a great place and deserves your support.

Before leaving for home, of course I had to get Lance to pose for the obligatory  ‘fan’ photo and have him sign my copy of his Night Photography bible:

If you’re interested in participating in one of Lance’s future tours, check the NightSkye website for updates. Two Scottish trips are planned for 2012; one in May, covering Orkney and Shetland, with another in October visiting Skye and the Outer Hebrides. Exact dates to be finalised. Keep abreast of the latest info by signing up for the NightSkye newsletter.